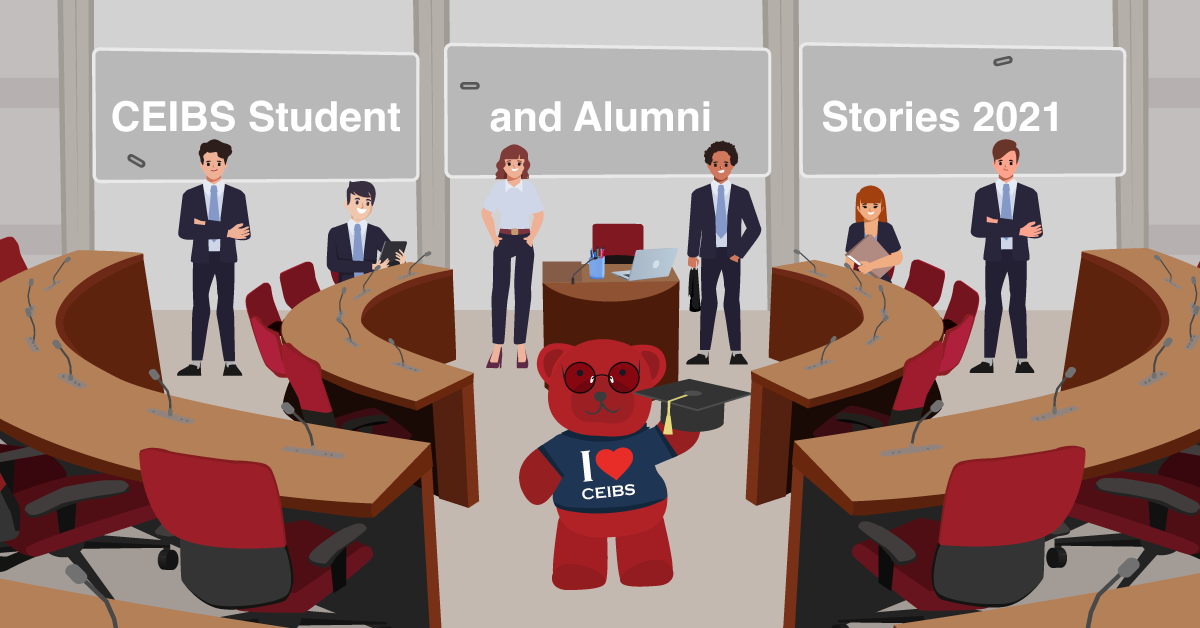 December 18, 2021, Shanghai – Despite the global challenges faced over the last two years, CEIBS students and alumni continued to combine passion with purpose and found themselves on the path to success and significance this year. Here, we look at some of our favourite stories from 2021.

CEIBS Japanese MBA alum Mayuko Kawata tapped into the Chinese retail market and was fascinated by the leadership challenges undertaken by her class in the Gobi Desert, citing it as one of the most exciting, revealing and fulfilling experiences of her MBA.

As MBA 2016’s Sushant Gupta prepared to leave China after seven years to work for Boehringer Ingelheim’s global HQ in Germany, he shared his understanding of how business works in China, whilst Clinton Wong, reflected on how a once-in-a-lifetime meeting with his presidential namesake set him on a path to pursuing a career in elderly care.

A recipient of the Member of the Most Excellent Order of the British Empire (MBE), one of the highest official honours issued to British citizens, CEIBS Global EMBA 2020’s Chris Dunn discussed strengthening UK-China ties amidst COVID-19 and experiencing the GEMBA Leadership Stream.

In an interview with CEIBS MBA 2022’s Antoine Millot, Gran Fondo New York (GFNY) Founder Lidia Fluhme talked about how her stay in Shanghai gave her perspective on her career and shared what it takes to be a sports and entertainment entrepreneur amidst the challenges and uncertainty of COVID-19.

Aiming to strengthen his career in Asia, Celso Benido recalled his six-year winding path from Portugal to Southeast Asia to Switzerland to China. Meanwhile, Rodrigo Rodrigues, the second Brazilian to attend CEIBS, brought happiness to Asia by charting a global career with Budweiser.

From the workshops of Rhode Island School of Design to the slopes of Switzerland, MBA 2022’s Lawrence Wu revealed how investing in the future for food led him to CEIBS, whilst Irene Asare told her story of making the leap from CEIBS to the BBC in the middle of the global pandemic.

In a story he shared earlier this year, Huawei IT Operations Director and CEIBS Global EMBA 2018 alum Naidu Kanakala identified the need to understand and embrace differences in culture and revealed that “wanting to have my assumptions challenged and my mind-set informed by new experience” was the main reason why he chose CEIBS.

In A Tale of Two Davids, Global EMBA alums David Moreno and David Sancho shared their stories journeying from Spain to starting businesses in China with some valuable advice for entrepreneurs. Meanwhile Global EMBA 2020’s Jacquelien Postigo Brussee reflected on her journey to leading an international design-led creative company’s China business and her commitment to lifelong learning.

In an interview with MBA admission, Bloomberg TV News Anchor and CEIBS MBA 2008 alum David Ingles recalled his immersive journey at CEIBS and how it has impacted his career, whilst MBA 2010’s Clarke Schaumann explained how his time at CEIBS helped him lean into a global mind-set and advance his career the rapidly changing world of international banking.

From Israel to China, autonomous driving aficionado Stav Shvartz showed how passion led his career roadmap, while Laure-Cecile Lafond-Fenonjoie spoke of her long-held connection with CEIBS. Finally, Global EMBA 2018’s Baggio Song recalled how the diversity offered at CEIBS first attracted him to the school and how conflict can serve as valuable learning tool.

Click here to read more stories from the CEIBS community.