Huawei IT Operations Director and CEIBS Global EMBA 2018 alum Naidu Kanakala discusses coming to grips with Chinese business culture, learning to think strategically and why there is no substitute for experiencing the realities of a new place in person. 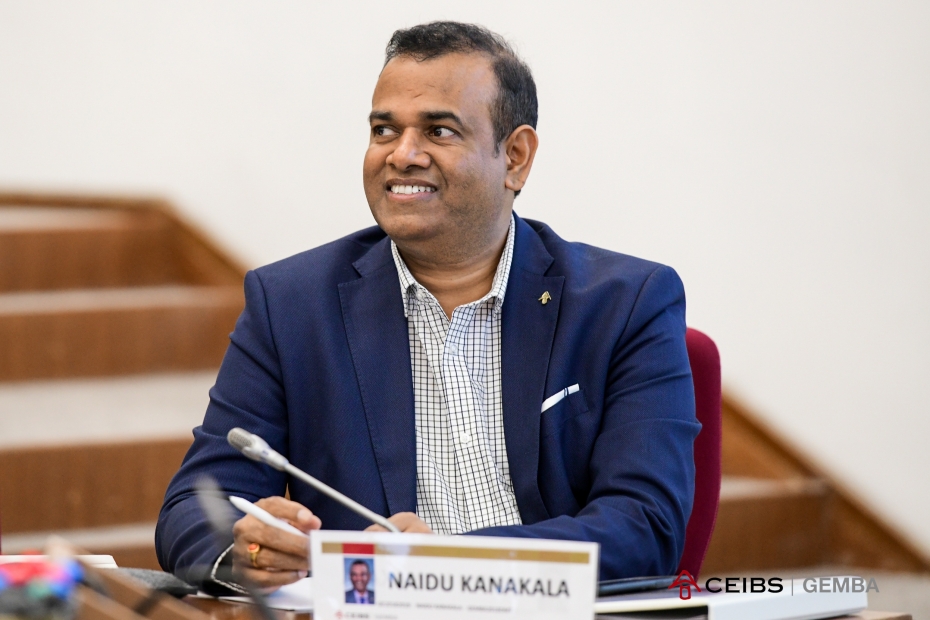 Naidu Kanakala is a CEIBS alumnus from the Global EMBA 2018 cohort who in many ways represents a microcosm of the ‘China Depth, Global Breadth’ spirit of the programme. Naidu is Indian, but in his current role as an IT operations director, he oversees Huawei’s IT operations for a Nigerian mobile service provider with over 14 million customers. He manages a team of around 180 people, splitting his time between project management and overseeing the maintenance and improvement of the client’s IT applications and infrastructure.

In all his time witnessing – and indeed helping to shape – the transformation of ICT (information and communications technology) in Africa, Naidu has consistently appreciated the need to understand and embrace differences in culture, both in business and more generally. He believes that being aware of, and empathetic to, differences in approaches can determine the success or failure of any strategic undertaking for a highly diverse multinational enterprise.

“It didn’t take me long to adapt to the African business mind-set, to the hustle and bustle and different ways of doing things,” Naidu says. “I think that coming from India helped in a sense, since it’s a very busy, diverse country. Still, wherever you are, it is always important to absorb current realities and let them inform your past experiences and assumptions, rather than to automatically assume you know best.”

By the time Naidu started looking for EMBA courses, he had already been working in Africa for over 16 years. Having identified him as a valuable resource, Huawei’s upper management was eager to see Naidu take on a new academic challenge that would help expand his already extensive business toolkit.

Having learned the value of experiencing different business cultures first-hand in Africa, Naidu wanted to explore more of the Chinese mentality in China itself.

“Huawei is an excellent company and the people it attracts work hard like I’d never seen before. However, even though I was working for a Chinese company, I felt there was a limit to what I could learn about the Chinese business mind-set, simply because my colleagues were focused on our specific business context and the daily reality of what we were doing,” he explains. “That’s mainly why I wanted to attend a Chinese school, to better come to grips with this business culture.”

Having decided that China was the place to be, Naidu looked more closely at CEIBS after looking at the Financial Times’ EMBA rankings and seeing that CEIBS’ Global EMBA programme was ranked #13 globally (at the time). The programme soon shot up to #5 right after his course started in 2018 and has now risen even further to become #2.

“After expressing my interest in the course, I met someone from the CEIBS support team, and she showed me a brochure. There was a lot to recommend the programme, but one particular line stuck with me. It say, ‘Validate your assumptions’,” Naidu recalls. “I thought that was a good sign, because my business journey has been about just that. I wanted to have my assumptions challenged and my mind-set informed by new experiences. That’s why I chose CEIBS.”

Naidu adds that his interest in studying in China was further piqued by the fact that the country had produced more billionaires in the past 20 years than any other country.

“They must be doing some important things entirely right!” he says.

New Worlds to Discover and the Global EMBA Experience

Beyond his experience working for Huawei in Africa, Naidu had no firm expectations for China itself. Fortunately, both Shanghai and CEIBS proved to be entirely to his liking from the start.

“I had never visited China, so I remember being struck by the quiet beauty and orderliness of Shanghai – and Pudong specifically – given how many people live here,” he says. “There’s sometimes a slightly negative perception of China in India, but I believe that travel and education are the best ways to overcome these prejudices in anyone.”

Naidu also highlights the importance of the opening modules for showing him the generally warm and collaborative approach that his peers showed to their studies. He says he remembers enjoying the varied case studies from the very start of the course, as they allowed him to discuss and dissect business challenges with like-minded executives spanning all manner of personal and professional backgrounds.

The global electives also proved to be some of the most enjoyable and enduring memories of Naidu’s time at CEIBS. Perhaps this is unsurprising given his love of travel and experiencing new cultures. He cites the importance of physically going to different CEIBS campuses and partner schools across the world as a more intense intellectual exercise and source of invaluable bonding time between him and his classmates.

The range of hands-on activities and access to new business perspectives in Barcelona, Zurich, Accra and elsewhere gave Naidu plenty to take back and incorporate into his daily work. In fact, he says, the impact of a certain trip went deeper than this, as he claims to have completely fallen in love with Zurich, and is steadily working on convincing his family to move there in the future!

“These trips were eye-openers in the truest sense. In 2019, I spent over 45 days traveling and experiencing many countries and two continents I was wholly unfamiliar with,” he says. “You cherish these experiences because there’s simply no substitute for seeing and feeling the realities of somewhere so different. You can’t learn about that in a classroom in the same way. It’s just not possible.”

Thinking Bigger and the Post-GEMBA influence of the Global EMBA

When asked about how the Global EMBA programme has impacted his current work/life and attitude towards business, Naidu says that the benefit of the course is split into two main parts. The first is the hard skills and overall familiarity he has gained regarding numerous business functions. The second is how the course enhanced his ability to think more strategically about any given business challenge while being open to more novel approaches to tackling it.

“The Global EMBA definitely sharpened my business acumen; I can look at any company’s financials and assess them fairly confidently. Perhaps not to the level of an auditor, but still!” he says. “I really value this, but I believe the biggest change in me is that I always think strategically now. I’m always thinking about the final objective. I want to know how we are going to solve the bigger issues, not just immediate, technical ones.” 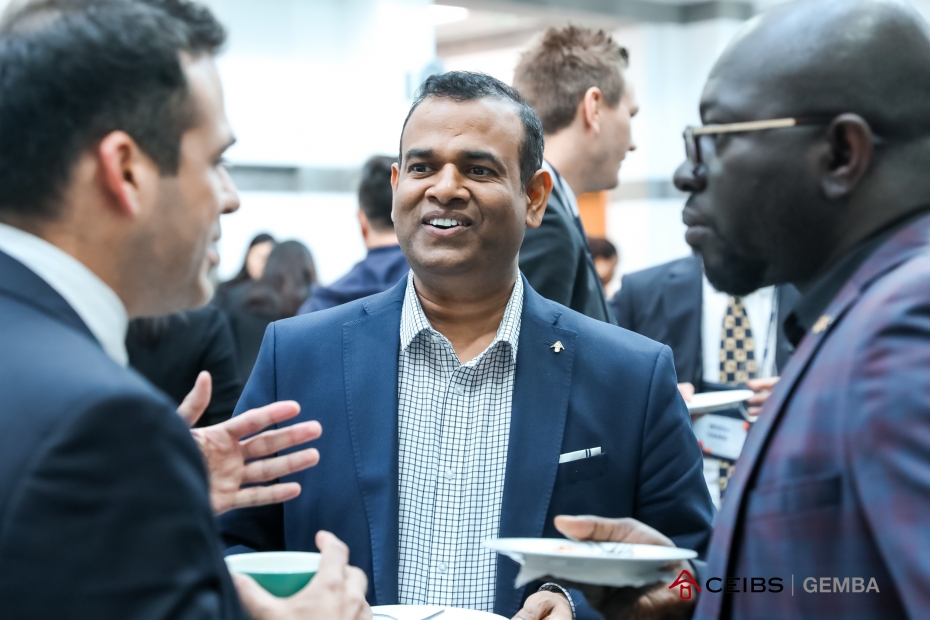 The COVID-19 pandemic has played a big part in Naidu’s work/life, but has also significantly affected his CEIBS experience. For practically all of 2020, international travel was off the cards, and it may remain that way for a large chunk of 2021. For Naidu, this is as much an opportunity to reflect on the status quo as it is an ongoing source of difficulty and disruption.

“2020 already gave us the direction for doing business in 2021. It’s been incredibly hard but it has also made us realise that even seemingly impossible challenges can be overcome. The pandemic continues to push us to think beyond our limitations and form better solutions that we might not have considered or committed to in more ‘normal’ times,” he says. “Look at big IT and tech firms across the world, they’re looking to make a big switch towards working from home a more permanent reality. Maybe 60-70% of their workforce will work from home permanently. That’s a gamechanger in terms of sustainability and encouraging truly limitless workspaces.”

Now into his twelfth month working from home, Naidu isn’t letting space constrain his ideas and ambitions. Not only is he forging new communications networks with his team across Nigeria, he’s taking his love of cycling to the next level with an indoor set-up that lets him connect to other enthusiasts around the world as he puts the bike through its paces!