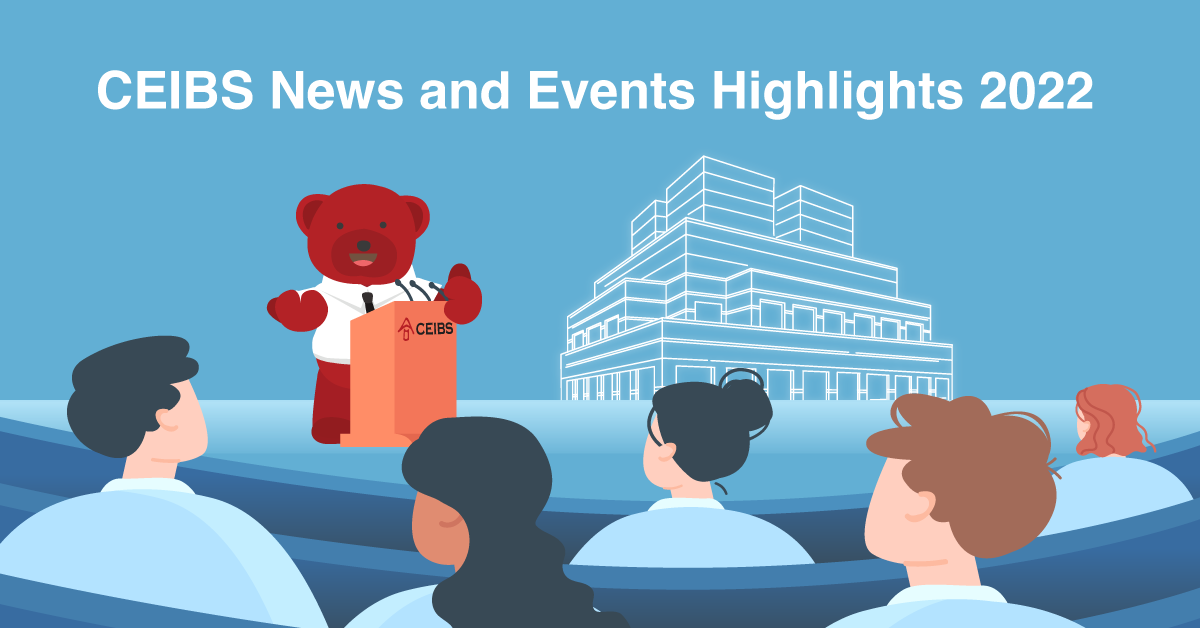 December 28, 2022. Shanghai – Despite numerous challenges and much uncertainty over the past 12 months, the CEIBS community had much to celebrate this year. Read on for a sample of some of the most exciting (and unexpected) news and events highlights from 2022.

We started the year on a positive note, as two sets of CEIBS winners were featured in the Financial Times Responsible Business Education Awards – a teaching case focused on protecting children from hazardous materials, and an alumnus who is helping reduce coal consumption in northern China.

In February, CEIBS was hailed as a key institution serving the development of Shanghai and China and a bridge to the world in a Business School Impact System (BSIS) evaluation report. The BSIS report assessed the school’s regional, societal and intellectual impact and highlighted CEIBS’ role as part of Pudong’s ‘talent hub’ by contributing over 8,000 alumni to the area’s pool of management expertise.

April also brought good news, as CEIBS once again demonstrated its position as a leader in research after a record high 15 faculty were named to the 2021 list of Highly-Cited Chinese Researchers released by world-leading academic publisher Elsevier.

CEIBS was represented at the highest level in May, as Vice President and Dean Ding Yuan rubbed shoulders with leading influential thinkers from around the globe and accepted interviews from the world’s top media at the World Economic Forum’s annual conference in Davos.

CEIBS successfully renewed its five-year EQUIS accreditation in July 2022. The EQUIS label was awarded to CEIBS by the EFMD in recognition of its commitment to excellence and continuous improvement as an international business school. The reaccreditation follows a virtual visit to CEIBS by the EQUIS Peer Review Team (PRT), during which the PRT conducted an in-depth assessment of the school’s development.

The CEIBS MBA Class of 2022 concluded their journey in July at a special hybrid graduation ceremony that also welcomed back alumni from the MBA 2020 and 2021 cohorts. Joined by professors, mentors and CEIBS staff, more than 100 graduates officially joined the CEIBS alumni community of more than 26,000 professionals worldwide during the first on-campus MBA graduation ceremony since 2019.

A new research institute on social security and aging finance was inaugurated at CEIBS Shanghai campus in August as part of the school’s efforts to contribute to the pressing social challenges brought on by China’s aging population. The institute brings together insights from industrial experts, policymakers, international think tanks, universities, and entrepreneurs to build a network and an exchange platform for social security research between China and the rest of the world.

September arrived with another major school announcement, as Professor Dominique Turpin was appointed as the new CEIBS President (European), replacing Prof. Dipak Jain. Prior to joining CEIBS, Prof. Turpin was the President and Dean of IMD, where he served as a professor of marketing for more than three decades.

For the first time in three years, the CEIBS European Alumni Reunion took place offline at our Zurich campus in early September. The event was an opportunity for the school’s alumni from all over the world to socialize, and sharpen their skills together with their fellow peers and to reconnect with old friends and make new ones.

The CEIBS Insights Europe Forum series also made a big offline return in September, with dual-venue events in both Brussels/Shanghai and Paris/Shanghai. The events explored themes of China-Europe cooperation on carbonization and the Chinese economy in the post-COVID era.

The opening ceremony for the CEIBS MBA Class of 2024 was held in early October, with CEIBS Shanghai Campus playing host to 120 students from 14 countries as they commenced their journey towards mastering business administration. The ceremony was officially opened by CEIBS President Wang Hong and President (European) Dominique Turpin.

Also in October, CEIBS once again claimed the #2 spot in the Financial Times’ global ranking of Executive MBA programmes for 2022. The announcement marked the third consecutive year CEIBS has landed in the #2 position. The school’s Global EMBA (GEMBA) programme is now the top-ranked single-school EMBA programme in the world. CEIBS also remained #1 in Asia in the FT’s MBA ranking earlier in the year.

The end of the year is always a special time in the CEIBS Global EMBA calendar, as it is when we welcome the latest class of new students to the programme and to the CEIBS family. The GEMBA 2022 class gathered at our Shanghai campus at the end of November for a special opening ceremony and the formal start of their 20-month learning journey.

In early December, Shanghai’s Pudong District government and CEIBS co-organized the Pudong International Talent Hub Forum with a focus on building organisational resilience in a VUCA (Volatility, Uncertainty, Complexity, and Ambiguity) world. The annual forum brings together experts, scholars, business leaders and others to exchange views on the latest talent strategies and trends related to international talent development in Pudong.

Finally, just as the year was coming to a close, CEIBS President Emeritus and Distinguished Professor of Marketing Dipak Jain was awarded the Shanghai Magnolia Silver Award by the Shanghai Municipal People’s Government, becoming the seventh CEIBS representative to receive the honour. Initiated in 1989, the prestigious award, which is named after Shanghai’s official flower, is given annually to foreign nationals in recognition of their outstanding contributions to social, economic, and foreign exchanges and cooperation in the city.

Want to keep up with all the latest CEIBS news and events? Click here.