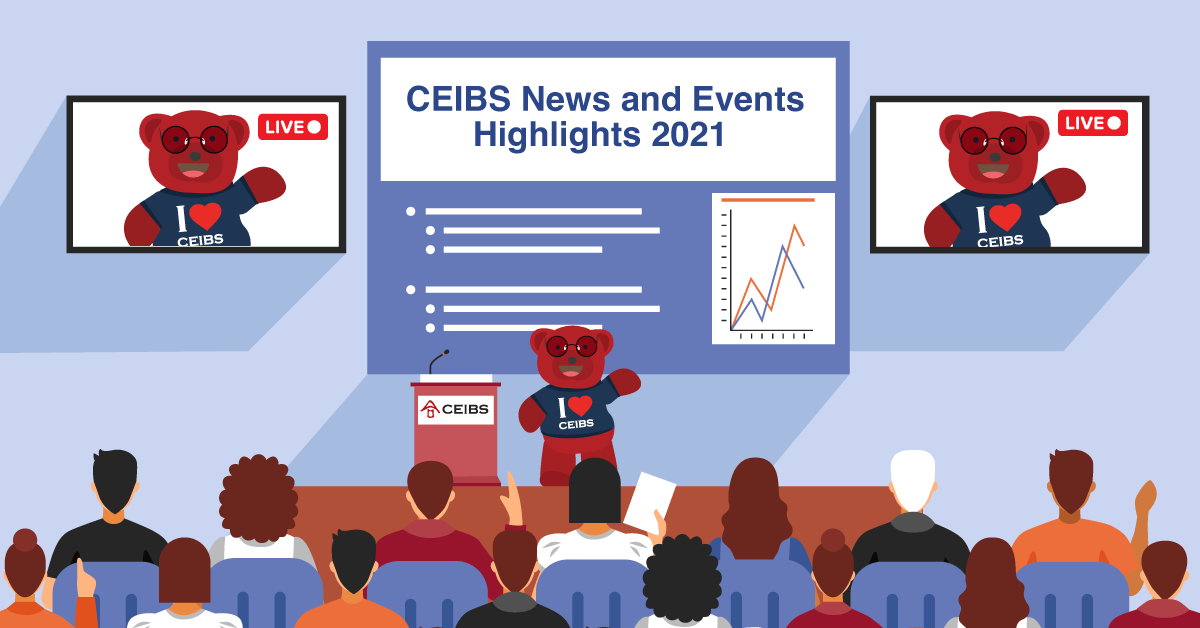 December 10, 2021. Shanghai – From launching new programmes and keeping up with global rankings to new faculty appointments and running offline events and forums, 2021 was a year to remember at CEIBS. As the year now draws to a close, we take a look back at some of the top news and events stories around our community during the past 12 months.

CEIBS retained then its spot amongst the world’s best business schools as its MBA programme finished seventh globally and first in Asia in the Financial Times’ annual ranking released in early 2021. This was also the fourth consecutive year the programme has been ranked in the top 10.

In an effort to bridge academic theory and business practice, CEIBS (Switzerland) launched the Doctor of Business Administration (DBA) programme in April. With greater focus on practical application, the DBA is designed to help top business executives and key policymakers gain an interdisciplinary perspective and inspire them to make original contributions to the world of business.

Spring brought with it more good news, as the CEIBS-EHL joint Hospitality EMBA (HEMBA) was certified as an EFMD Accredited programme. The accreditation serves an important milestone for the programme in its quest to meet the highest international standards for academic excellence.

Now in its sixth year, the CEIBS Innovation Forum series made stops in Hangzhou, Taiyuan, Hefei, Liuzhou, Xi’an, Wuhan and Zhuhai in 2021. The series is aimed at is aimed at disseminating the school’s management knowledge and making intellectual contributions to social and economic development.

Amongst other notable achievements, CEIBS faculty again featured on both Elsevier’s list of “Highly Cited Chinese Scholars” and Poets & Quants’ list of the Best 40-Under-40 Professors. A CEIBS team also claimed the top prize in the category of Responsible Leadership in the annual EFMD Case Writing Competition.

In July, CEIBS launched the Global Young Leaders Camp, welcoming 36 university seniors and recent graduates (and future MBA hopefuls) to the school’s Shanghai campus. The camp gives budding leaders an opportunity to hone their skills and gain a competitive edge in their career.

As part of a broader effort to facilitate the school’s digital development, the CEIBS Smart Campus Project was launched in September. The project is aimed at improving business and data services and promoting greater interaction and coordination amongst faculty, students and staff.

October got off a good start for CEIBS with a number of opening ceremonies. The school welcomed 120 young professionals of the MBA Class of 2023, as well as the first cohort of 42 participants for the much-anticipated DBA programme.

In the 2021 Financial Times EMBA ranking, the CEIBS Global EMBA programme placed second in the world for second year in a row, giving the programme its fourth consecutive finish in the top five.

In November, CEIBS welcomed 100 new Global EMBA students to Shanghai Campus with a special ceremony to kick off their 20-month journey of learning and discovery.

The CEIBS Alumni Impact Survey 2021 was also released in November, providing insights from more than 2,000 alumni on business leadership, entrepreneurship and corporate responsibility, as well as their happiness and quality of life.

The CEIBS Insights 7th Europe Forum 2021 was streamed online this year. Speakers explored opportunities for Sino-French cooperation in green energy and electric vehicles with an eye on China’s dual carbon goals of peak carbon emissions by 2030 and carbon neutrality by 2060.

In a year of both challenges and extraordinary achievements, CEIBS has charted its course with creativity and courage and brought the school’s community closer together. We look forward to a new year with more achievements to come.

For all of the latest news and events highlights from around CEIBS, please visit our News page here.