Insights from a recent survey of more than 2,200 alumni
Back
Printer Friendly Page
Share to:

CEIBS alumni are actively engaged in all areas of society and make continuous contributions to the development of China and the world. At the same time, each one acts as a ‘name card’ for the school. To assess their influence and contributions and to better empower them, CEIBS recently launched an alumni impact survey to measure their impact across business leadership, entrepreneurship and corporate responsibility, as well as their happiness and quality of life. The survey sampled 2,252 Chinese and international alumni. Read on for the highlights from Associate Professor of Marketing Xiang Yi.

7.3 trillion RMB: The total revenue of CEIBS alumni-led companies listed on the Shanghai, Shenzhen, Hong Kong and New York stock exchanges and the NASDAQ in 2020. This figure exceeded the GDP of Canada, the world’s ninth largest economy (calculated based on purchasing power parity).

40%: The ratio of alumni who have started their own businesses or have co-founded business start-ups.

4,478: The number of seats occupied by CEIBS alumni on the boards of directors at listed companies.

5.78 million: The number of jobs created by alumni start-ups (roughly equal to the population of Shanghai’s Pudong district).

45,000: The number of companies founded by CEIBS alumni worldwide.

90,000 hours per month: The average cumulative amount of time that CEIBS alumni spend on public welfare.

In our survey, we focused on the current development of alumni enterprises, as well as their thinking ability, leadership, and execution in the daily management of their companies.

CEIBS alumni-run companies listed on the Shanghai, Shenzhen, Hong Kong and New York stock exchanges and the NASDAQ generated a total revenue of 7.3 trillion RMB in 2020. In addition, 4,478 CEIBS alumni currently serve on the boards of directors of listed companies, have founded 45,000 businesses worldwide and have created 5.78 million jobs.

Amongst respondents of the survey, nearly 51% are founders/heads of their respective companies, more than 80% serve in large companies, and one third work at a top-three company in their industry.

Most of the companies where CEIBS respondents serve are currently experiencing steady growth or are in an expansion stage. In 2020, the average revenue of companies founded/headed by CEIBS alumni stood at 8.2 billion RMB, while companies with middle-to-senior managerial CEIBS alumni generated about 30 billion RMB. 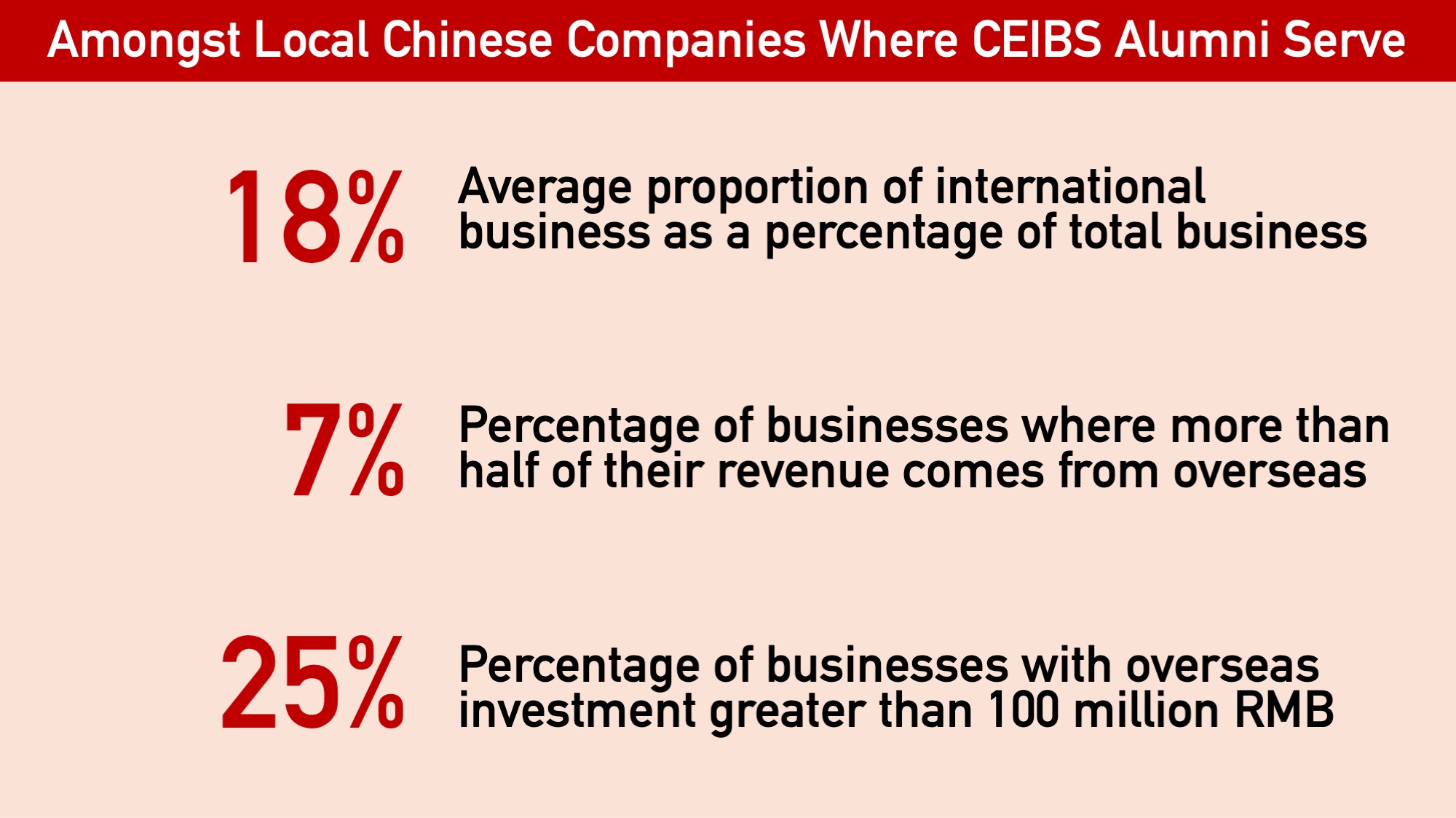 In order to look into the “internal power” of our alumni in propelling the development of their enterprises, we ask respondents to identify three questions they had thought about recently. The results indicate that CEIBS alumni think more about their company’s medium and long-term strategies, the value of managerial leadership, the reforming their company’s strategic positioning and the impact of these factors on their organisation. 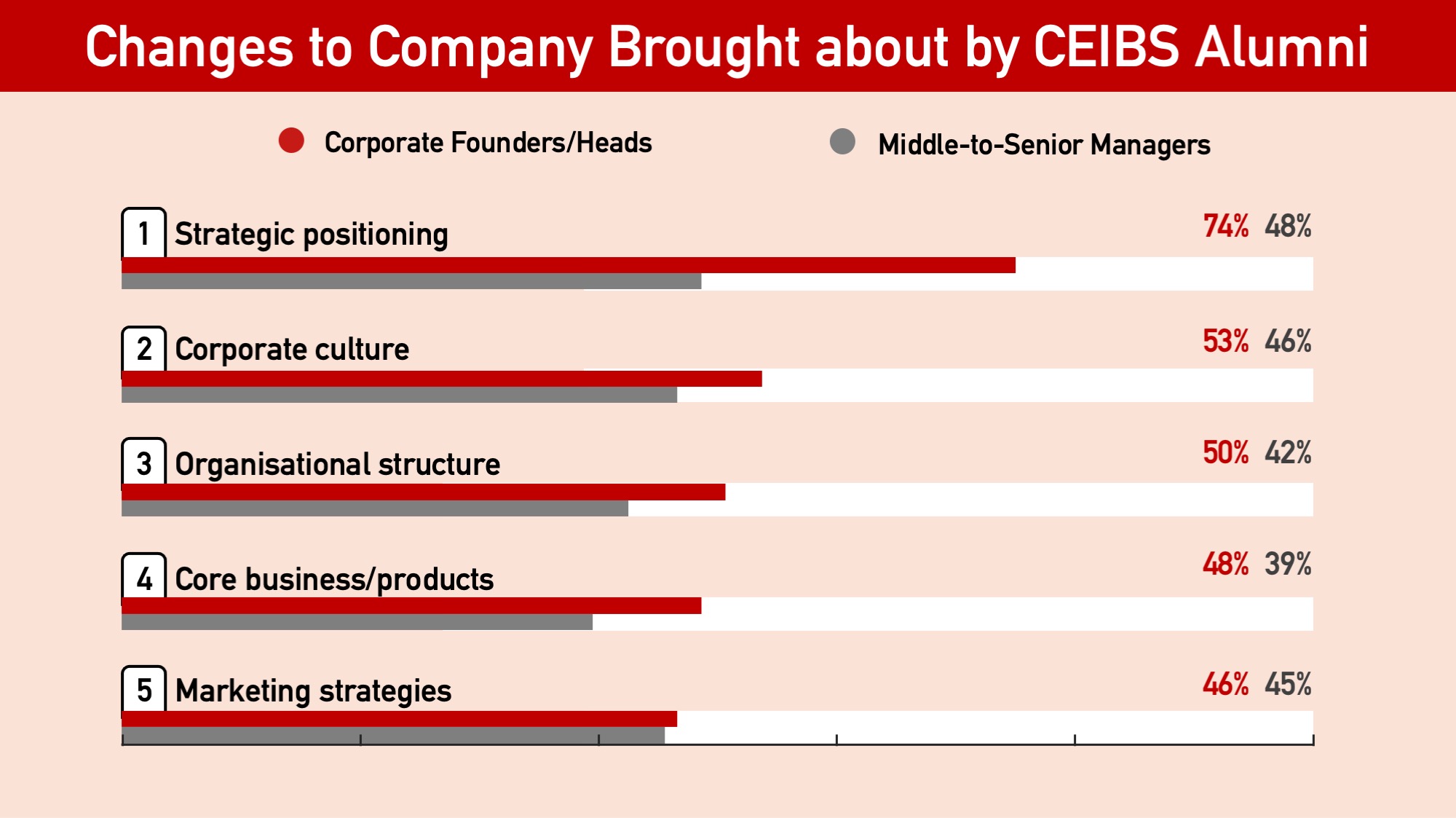 When it comes to daily habits that are beneficial to personal development, “staying positive and learning from mistakes” was one of the habits most cited by respondents. Other beneficial habits included proper exercise, communicating with others, work-life balance and paying attention to minor but continuous improvement.

Since 2012, CEIBS has taken the lead amongst Chinese business schools in offering programmes to help build an innovation and entrepreneurship ecosystem. Entrepreneurs make up a significant proportion of CEIBS alumni.

Half of respondents said that they have changed their career path since graduating from CEIBS, with nearly 40% choosing to start their own businesses. Many CEIBS alumni are serial entrepreneurs and 10% have founded more than five companies. Companies founded by CEIBS alumni have an average of 921 employees. 49% of these companies have received external financing, and nearly 6% have gone public. 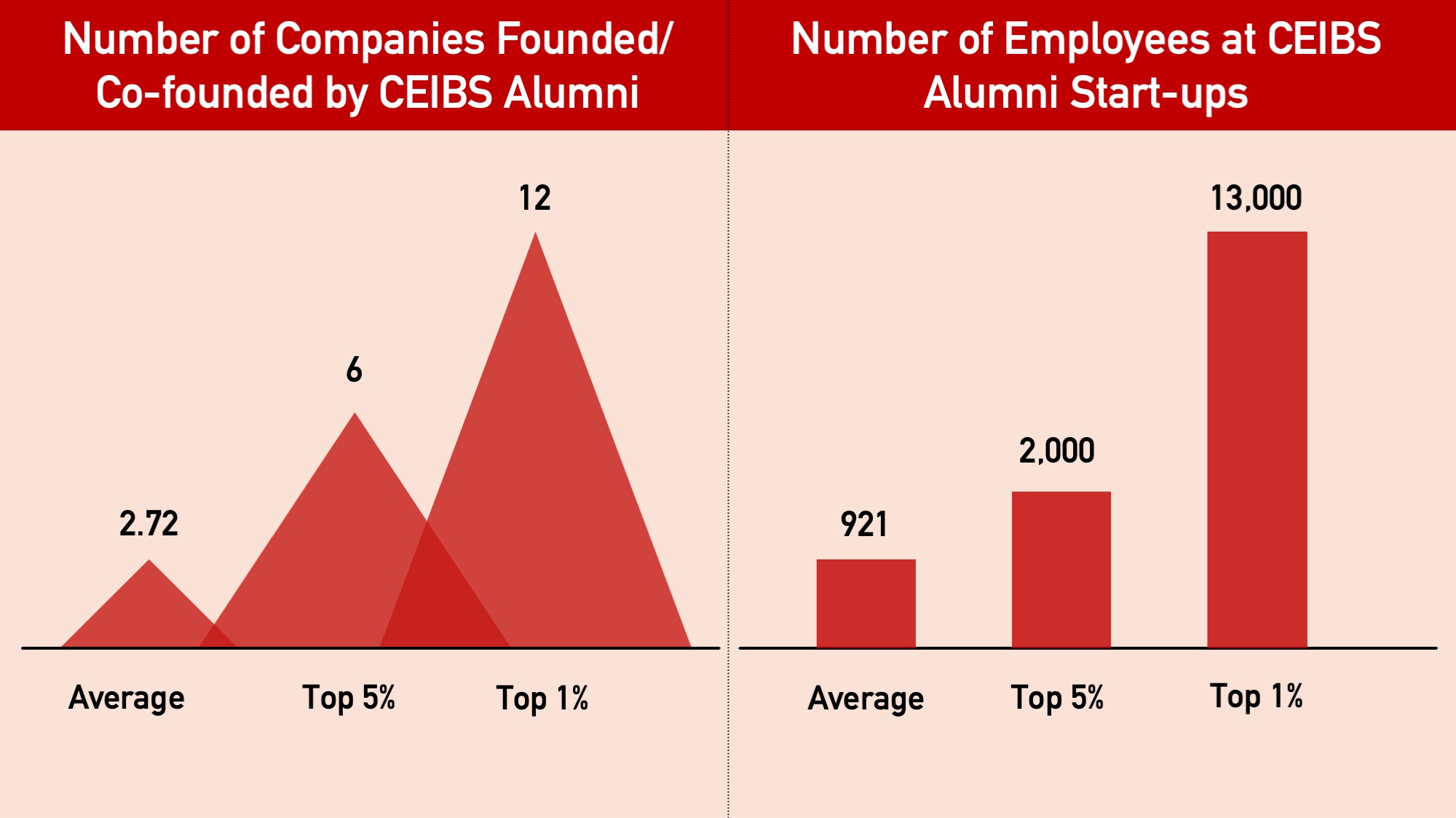 CEIBS was the first business school in China to include business ethics as a compulsory course, and has published the CEIBS Corporate Social Responsibility White Paper for four consecutive years. Our survey indicates that CEIBS alumni have a deep understanding of and regularly practice social responsibility.

More than half of CEIBS alumni have held various positions at the National People’s Congresses or Chinese People’s Political Consultative Conference (CPPCC), and 84% participate in charity and public welfare activities. Respondents also stated they spend an average of 11 days each year on social activities, while the top 5% of alumni contribute an average of more than 30 days per year to various social causes. 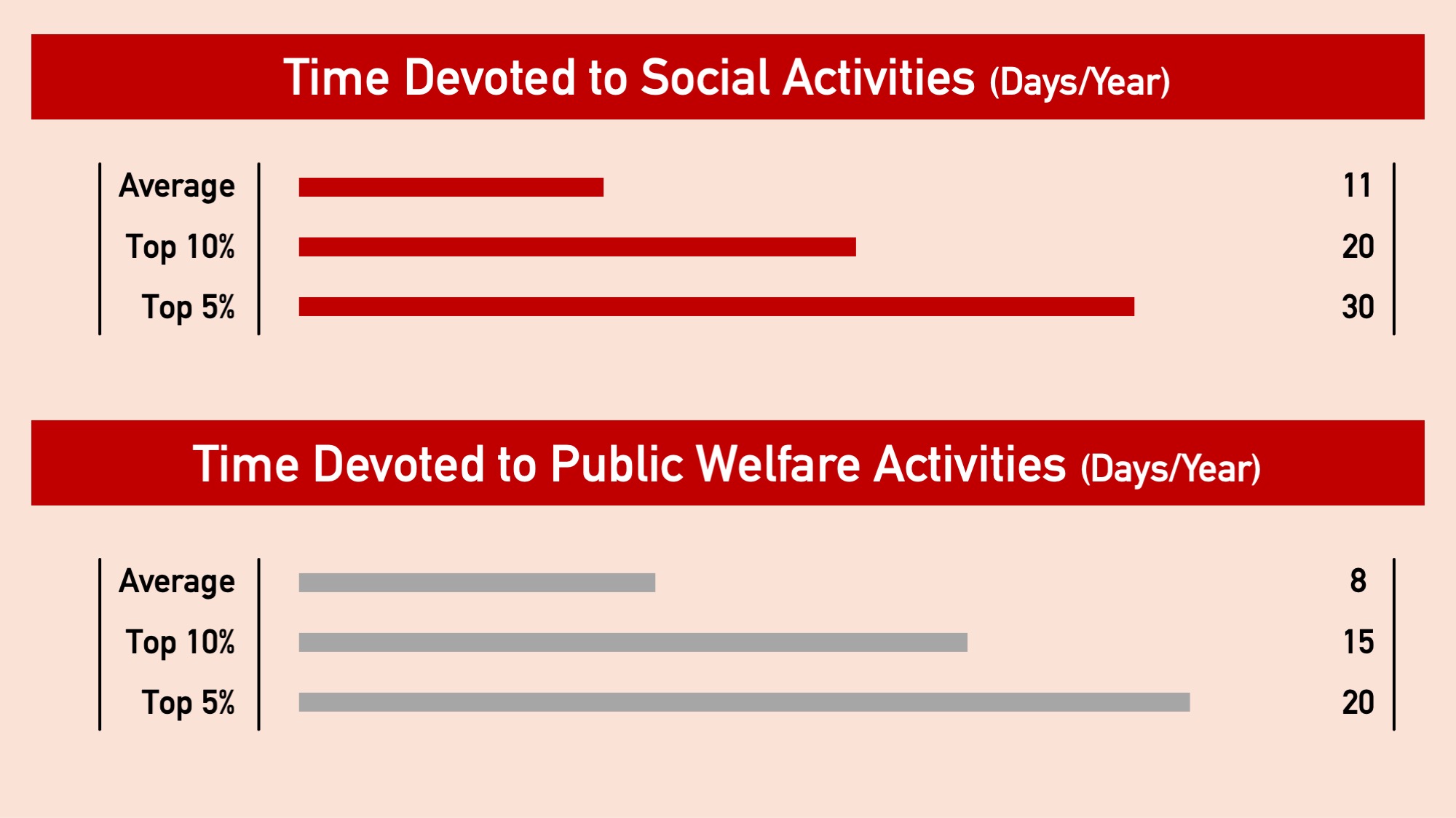 In the first month-and-a-half following the outbreak of COVID-19 in 2020, individual and corporate donations and materials from CEIBS alumni totalled nearly 1.8 billion RMB, and seven CEIBS alumni were awarded the title of National Advanced Individuals in the Private Sector Fighting COVID-19. In 2021, whether in response to torrential rain in Henan province or flooding in Shanxi province, CEIBS alumni and their companies were amongst the firsts to lend a helping hand and donate money and materials.

Happiness and Quality of Life

Released in 2016, China’s Healthy China 2030 plan repeatedly mentioned “healthy human capital.” Healthy human capital includes the overall competitiveness of an individual’s physical and mental health. Therefore, we wanted to take this opportunity to get an overall picture of our alumni’s happiness and quality of life. 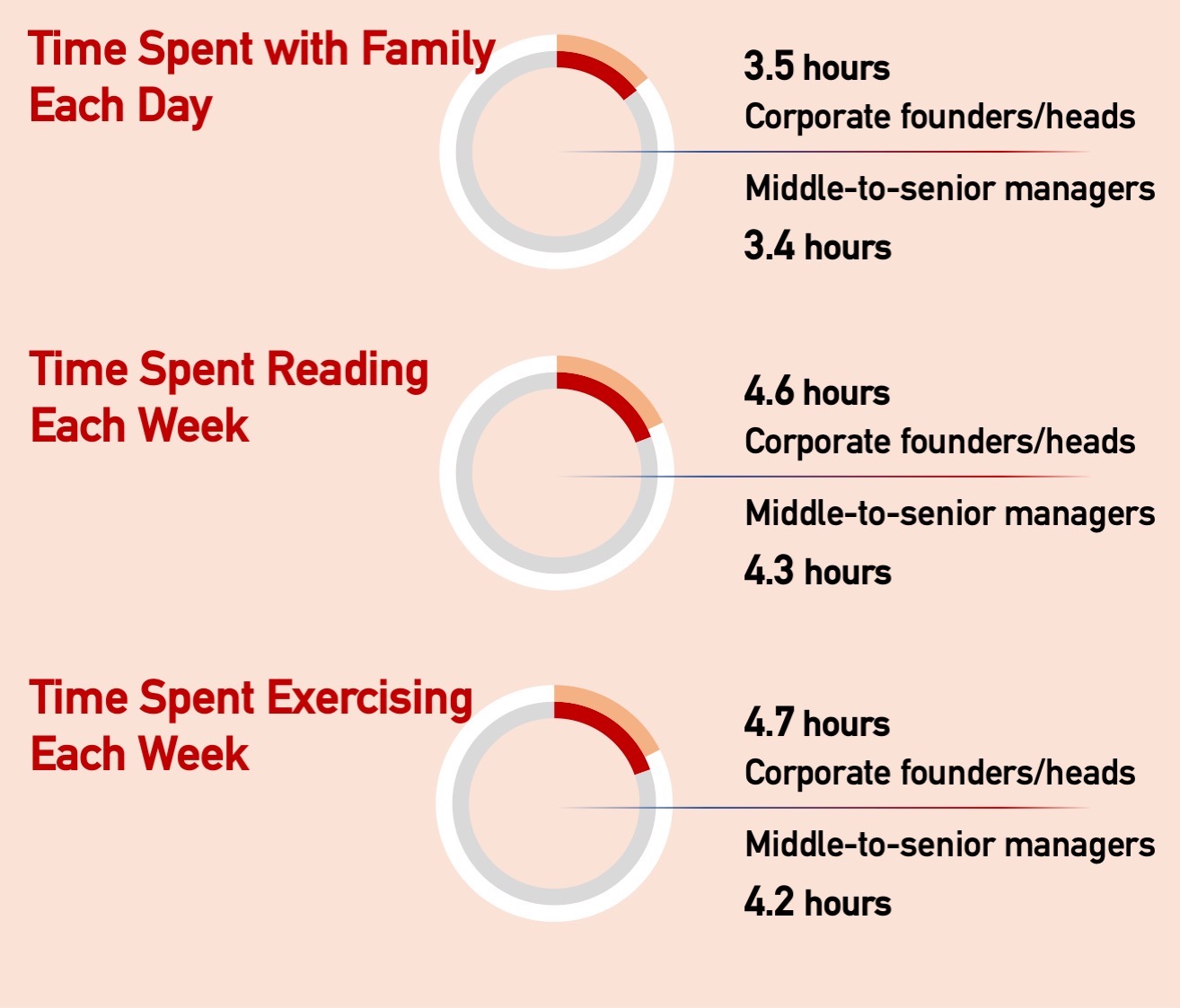 It is undeniable that increased wealth is one of the sources of happiness. According to the survey, CEIBS alumni who are the founders/heads of companies are more likely to experience an increase in both personal income (by 66% on average) and family assets (by 73%) within five years of graduation. 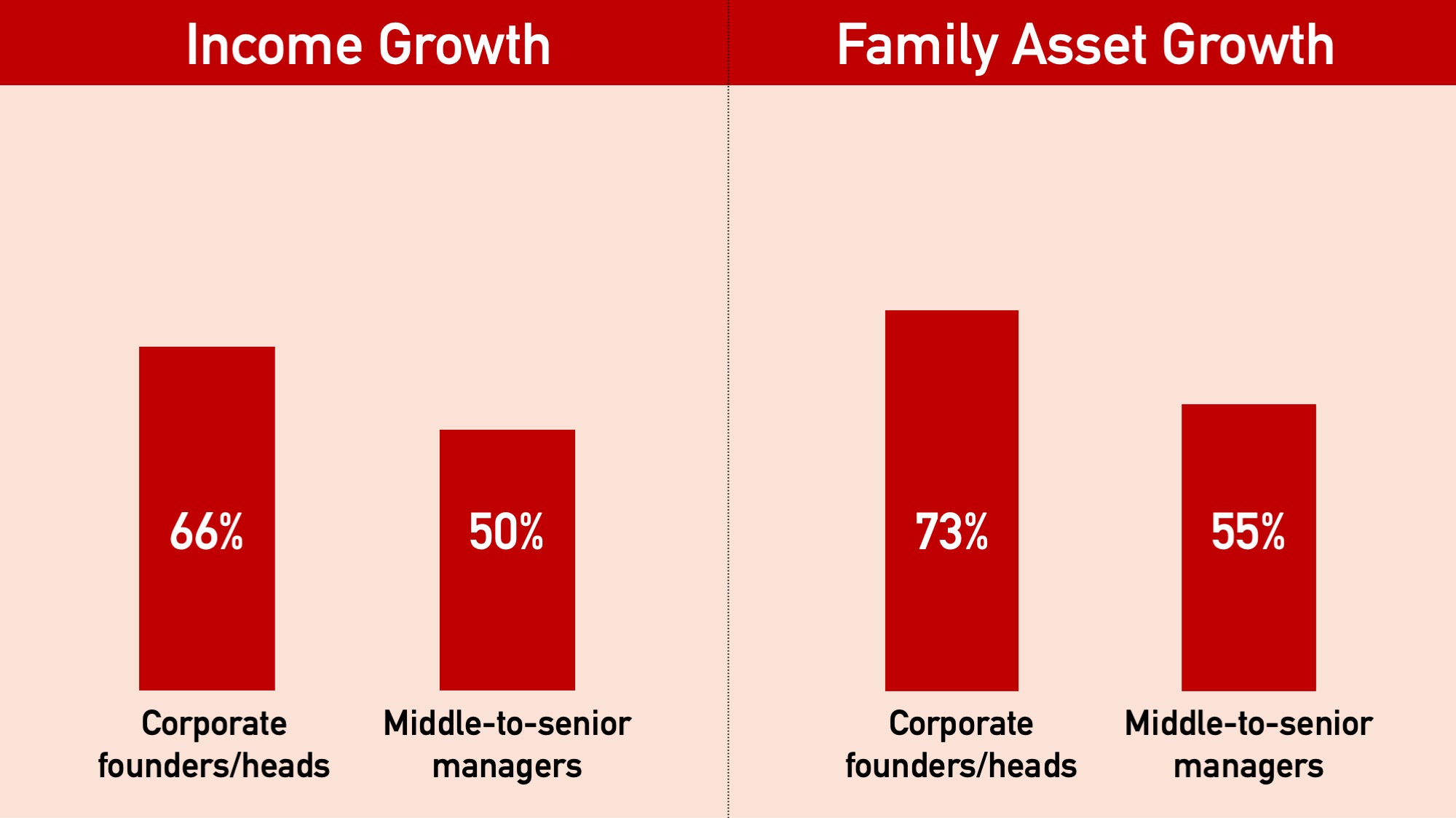 Support for the CEIBS Community

No business school can develop without the support of its alumni. Our survey shows that our alumni have a strong sense of identity and show a great deal of support for CEIBS. More than 92% of our alumni stated they are willing to support the school’s long-term development; 80% have referred others to CEIBS to study; 49% are willing to donate to the school in various ways; and 45% are willing to participate in the school’s teaching and research efforts. 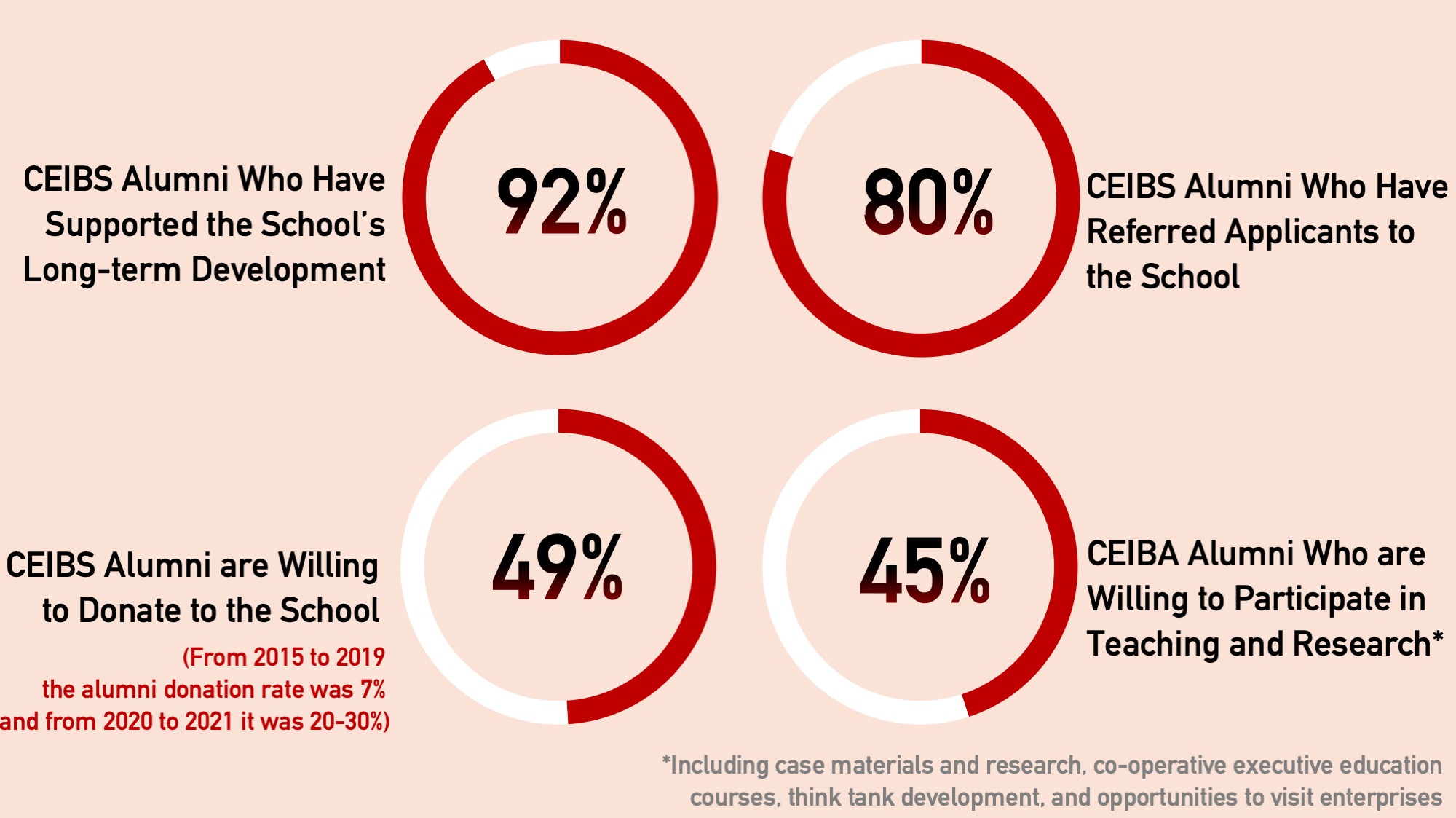 Our survey was conducted at a time when a global pandemic has resulted in some of the biggest changes in more than a century. Amidst uncertainty and instability, CEIBS alumni and their companies have made many significant contributions to China and the world. Once again, we would like to express our heartfelt thanks to all CEIBS alumni for their outstanding efforts. CEIBS will continue to forge ahead and innovate to cultivate more outstanding management talent and contribute to social progress everywhere. 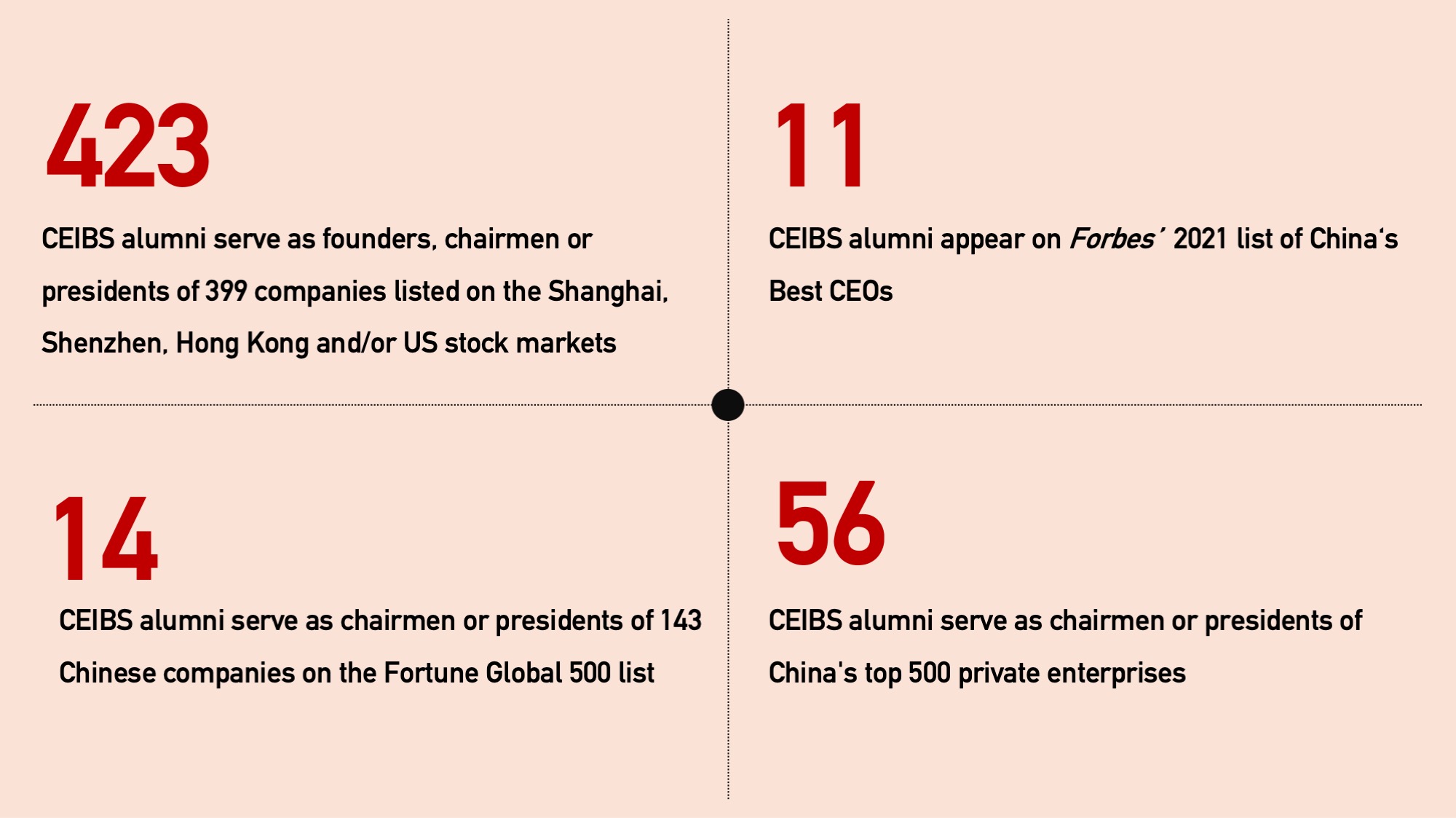 The CEIBS China Alumni Impact Survey 2021 was conducted between July 27 and August 16. The survey collected responses from 2,252 Chinese and international CEIBS alumni. Respondents are engaged in more than 20 industries, amongst which manufacturing, finance and information technology services accounted for the highest proportion, and those from private enterprises accounted for more than 60% of the total.

Our heartfelt thanks again to the CEIBS Alumni Association, the different programme departments, alumni regional branches and industry associations who helped distribute the survey and the 2,252 alumni who participated in the survey, as well as everyone on the survey project team.

Editor:
Effy He and Michael Thede
Make an Enquiry