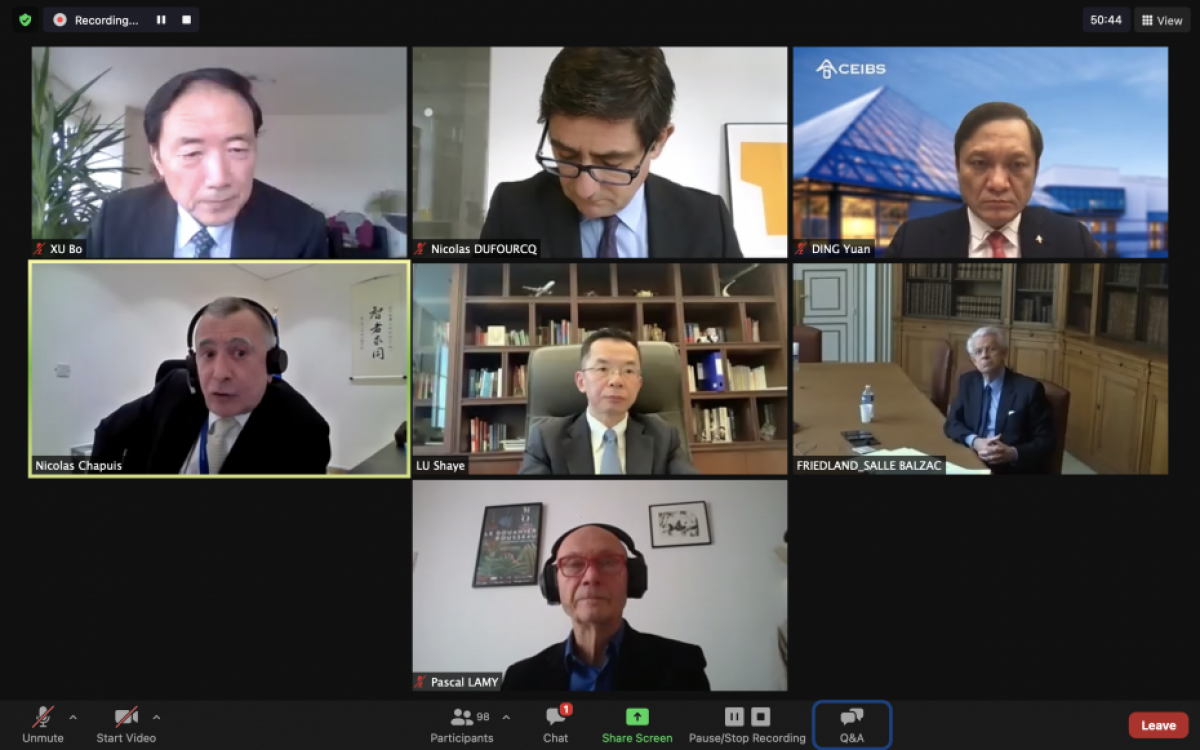 During the webinar, the panel reviewed the China-EU Comprehensive Investment Agreement reached by China and the EU on December 30 last year, and spoke highly of the unprecedented opportunities that the agreement provides for European companies – especially French companies – to enter the Chinese market. According to the agreement, China will open up sectors including new energy vehicles, telecommunications manufacturing, cloud computing, financial services, healthcare, corporate services and service industries related to sea and air transportation, environmental protection and construction to EU companies.

Ambassador Lu said that the agreement is the result of the joint efforts of both China and the EU. Moreover, he added that it reflects China’s determination in participating in the international economy and further opening up to the outside world. It is a balanced, high-level, mutually beneficial and win-win agreement, he continued, that provides for companies from both China and Europe. In particular, it will result in greater market access, an improved business environment, stronger institutional guarantees and brighter prospects for cooperation.

Many areas of the agreement are open to European companies for the first time and will create conditions to better share in the development dividends of the Chinese market in the post-COVID-19 era. Ambassador Lu said that the China-EU Comprehensive Investment Agreement also serves to refute the so-called ‘economic decoupling’ fallacy. In the context of globalisation, economic decoupling is harmful to any country and will not work. The Chinese government, he noted, has put forward the concept of economic ‘dual circulation,’ which places emphasis on the integration of the Chinese and world economies while developing the Chinese market. Ambassador Lu concluded by noting that the completion of the agreement is not the end, but rather a new starting point. Finally, he said he hopes that China and the EU will work together to promote the ratification process and make the agreement effective as soon as possible.

Professor Lamy stated that he believes that the China-EU Comprehensive Investment Agreement represents a brand new ‘21st century agreement,’ which goes beyond the usual minor tinkering of agreements between countries. However, he cautioned, it is too early to evaluate the impact of the agreement and it is still necessary to see it implemented. Nevertheless, he said that the agreement allows European companies to make up for the shortcomings left by the signing of the first phase of the economic and trade agreement between China and the United States.

European companies are now ahead of American companies in the Chinese market and Professor Lamy said that the agreement sends a clear signal that ‘economic decoupling’ is not feasible and that the EU and China are willing to enter into deeper economic exchange and integration. He added that there are still different opinions on the agreement within the EU, but that the webinar was very helpful for all parties to understand the agreement and will help the agreement be successfully passed within the EU in the future.

Next, Professor Ding said that it is gratifying that the China-EU Comprehensive Investment Agreement has finally reached a principled agreement after seven years, and it represents an unprecedented opportunity for European companies to enter the Chinese market. However, he added, the Chinese market is not what it used to be, and it is now full of competition. For example, he said, with regards to the medical field, France’s technology is indeed very good, but Japan and South Korea are also quite strong and have cultivated the Chinese market for many years. Therefore, he advised, French companies need to identify partners and understand market characteristics while studying the content of the agreement. Professor Ding further proposed that with the rapid growth of the Chinese middle class and rising demand for high-end consumer goods, French companies are looking at huge opportunities to enter the Chinese market.

Chairman Kling then said that the Chamber of Commerce, as a home for enterprises, is particularly concerned about what new business opportunities the agreement will present for SMEs. The Paris Region Chamber of Commerce and Industry has maintained an office in China for a long time, and often holds various activities at its headquarters in Paris to help French companies understand China. Compared with the past, he said, China has made significant technological progress and French companies have little advantage. As such, he added, they must re-understand the Chinese market and keep pace with the times. Mr. Kling explained that he believes the agreement brings the cooperation between Chinese and French companies closer, but it requires the unremitting efforts of French entrepreneurs to turn potential opportunities into real opportunities. Furthermore, he said he believes that CEIBS has been helpful for entrepreneurs on both sides in understanding each other’s markets.

Next, President Dufourcq said that the agreement is undoubtedly good news for French companies. As for positioning the agreement as a ‘major breakthrough’ or a ‘general breakthrough,’ he said it does not make much sense in itself. What is really important, he noted, is to implement the content of the agreement and to find new business opportunities for French companies. Mr. Dufourcq admitted that certain manufacturing sectors that were opened in the agreement, such as electric vehicles, represent no comparative advantage. As French automakers have no comparative advantage, he explained, such dividends may instead be enjoyed by German automakers. Nevertheless, he pointed out that the in-vehicle IoT technology used in German cars – and even in Tesla cars – is largely provided by French companies. French company Valeo, for example, has more than 30 projects in China. Bpifrance has invested in a large number of innovative projects in China. In fact, Mr. Dufourcq said, France is a country full of entrepreneurial spirit and innovation. The agreement, he added, provides new opportunities for French companies to enter the Chinese innovation market. Finally, he said that what French companies were most worried about before was that China would fall into the trap of ‘economic decoupling,’ and the agreement reached in principle shows the firm attitude of China and the EU against this trend.

More than 200 participants, including member companies of the Paris Region Chamber of Commerce and Industry, member companies of Bpifrance, CEIBS European alumni and students from the school’s two major teaching and research bases in Europe and Africa participated in the webinar. Participants commented that they believe that the agreement is of great significance to the promotion of French companies’ direct investment in China. The French business community also welcomed the agreement and said it hoped that China and France can further strengthen exchange and take practical steps to promote global economic cooperation in the post-epidemic era.

The webinar was hosted by Dr. Xu Bo, Special Advisor for International Affairs, Office of the Dean, CEIBS.