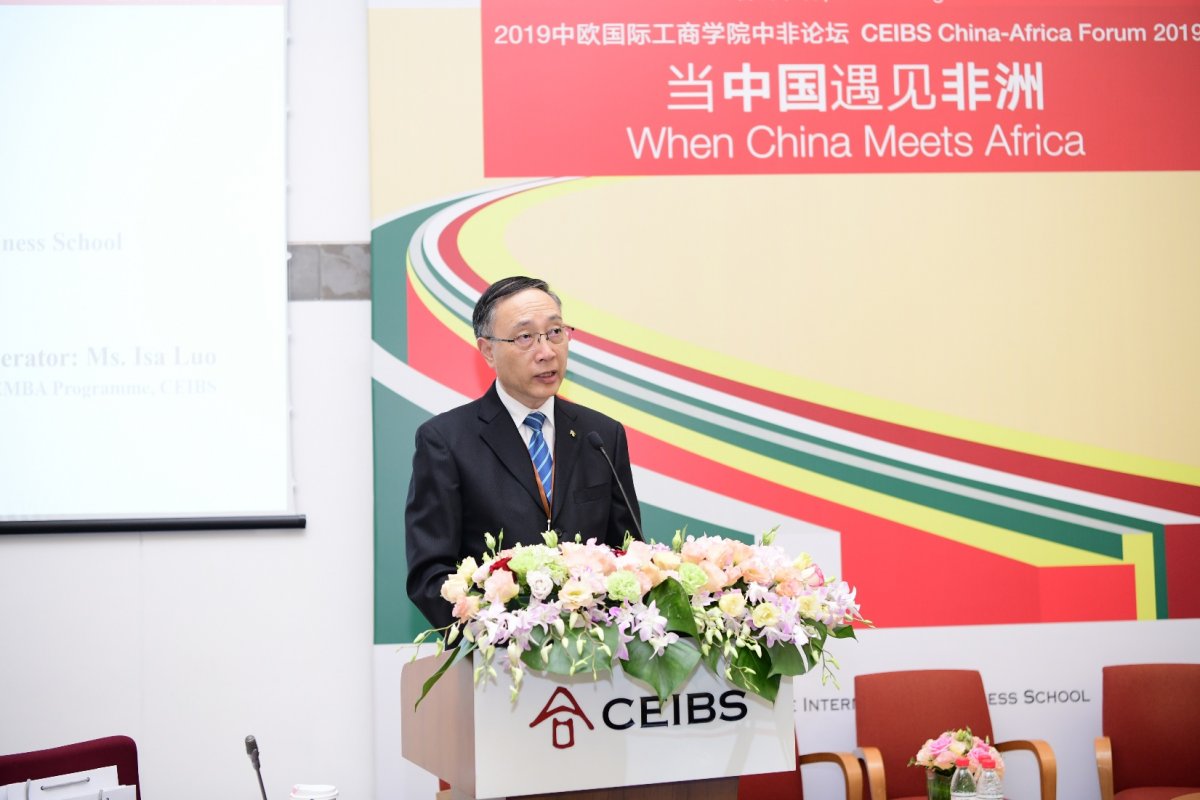 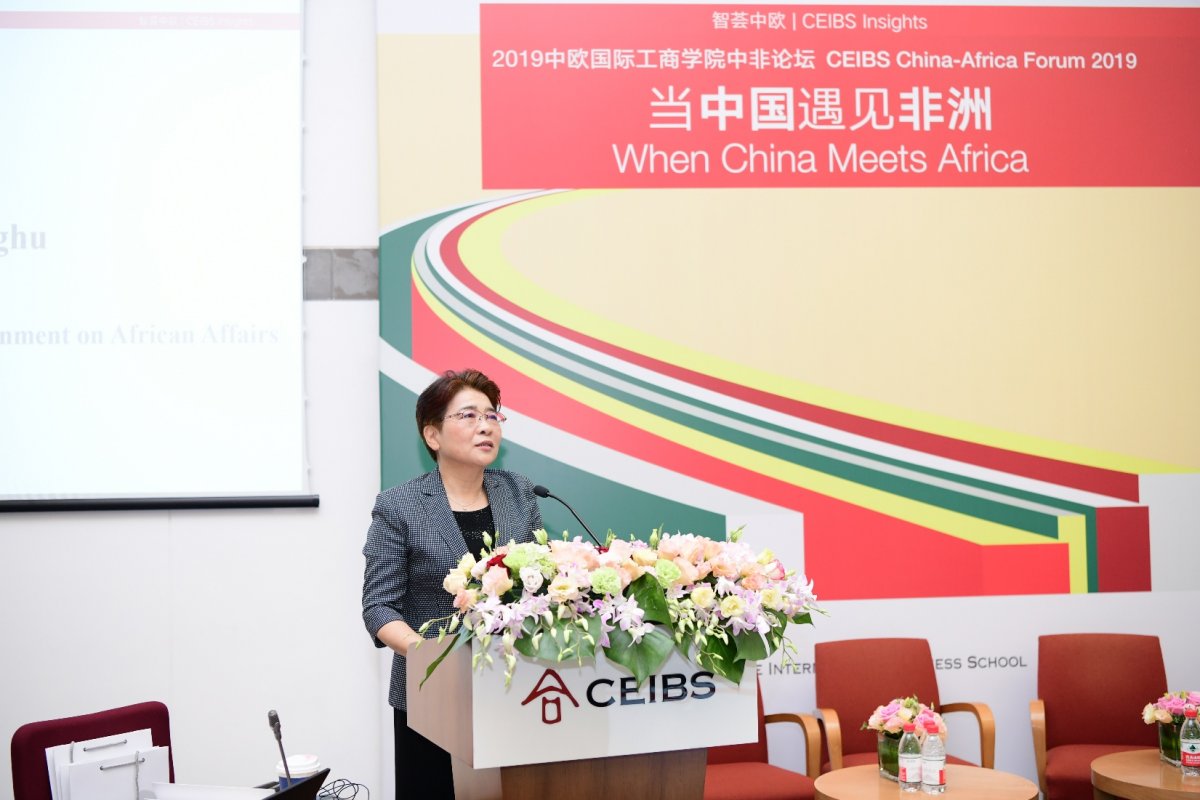 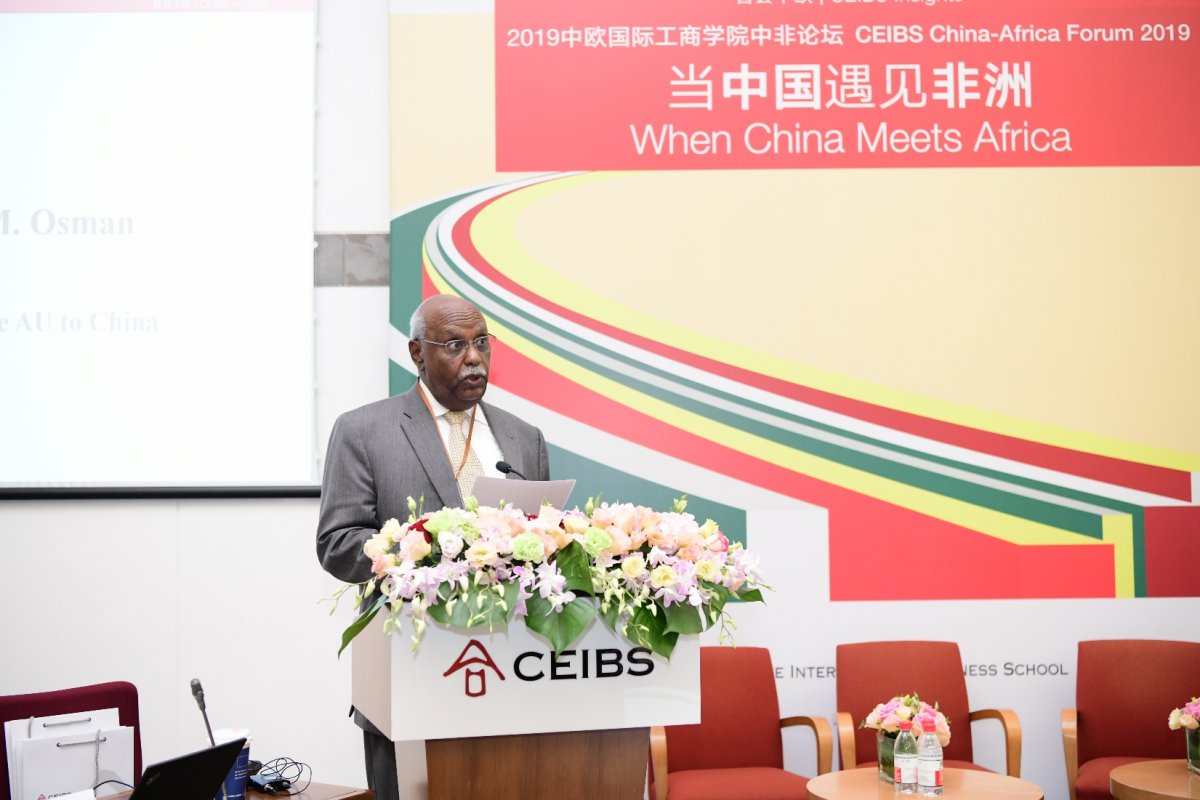 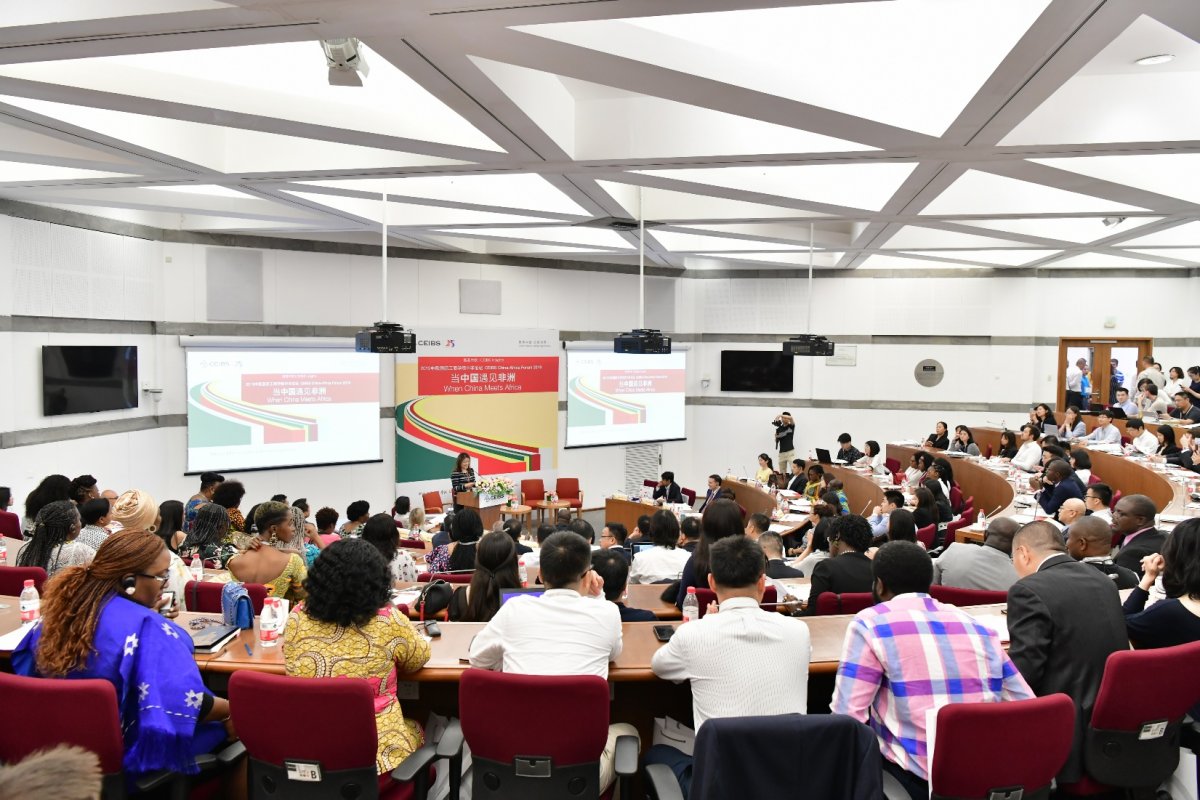 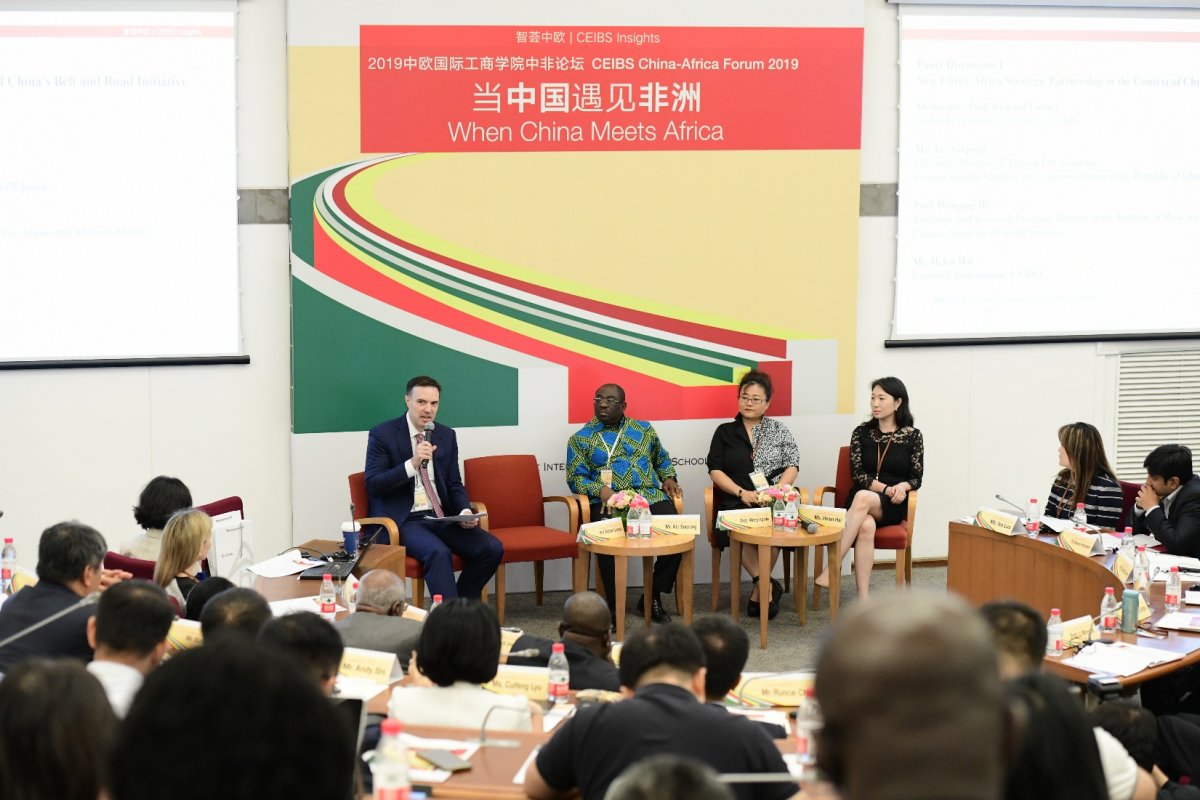 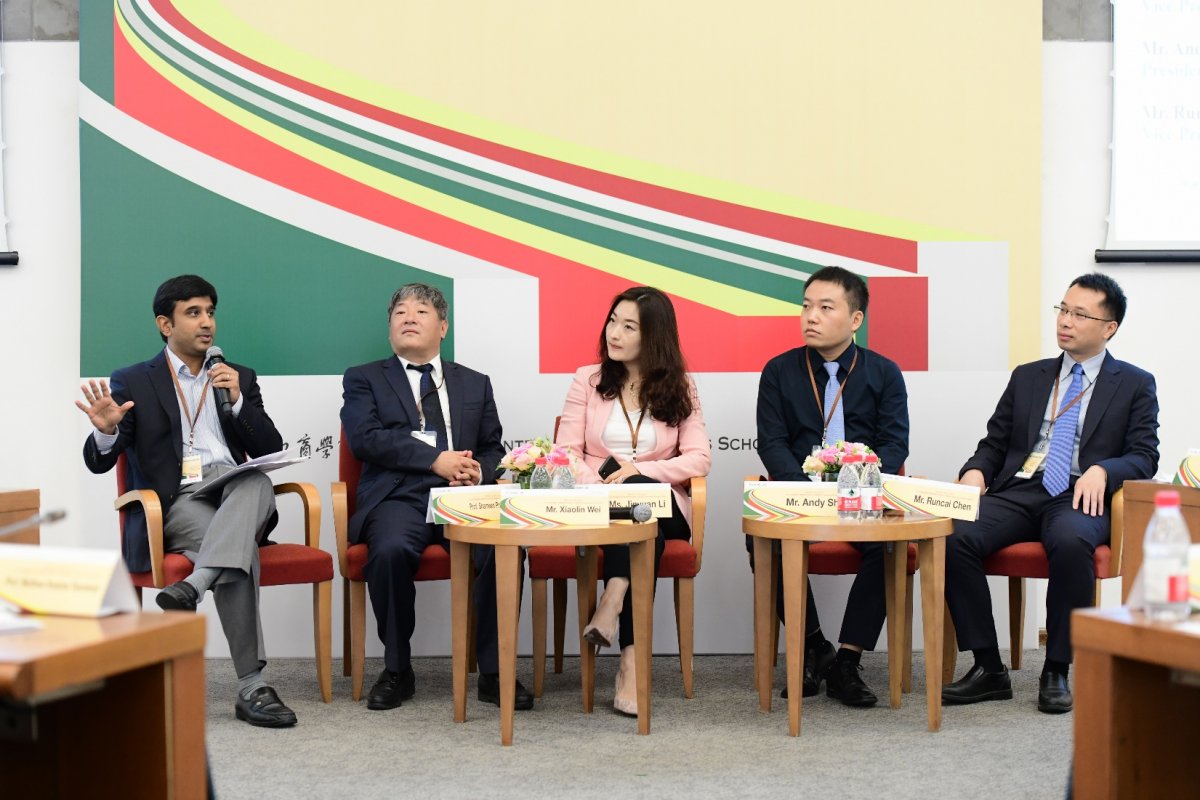 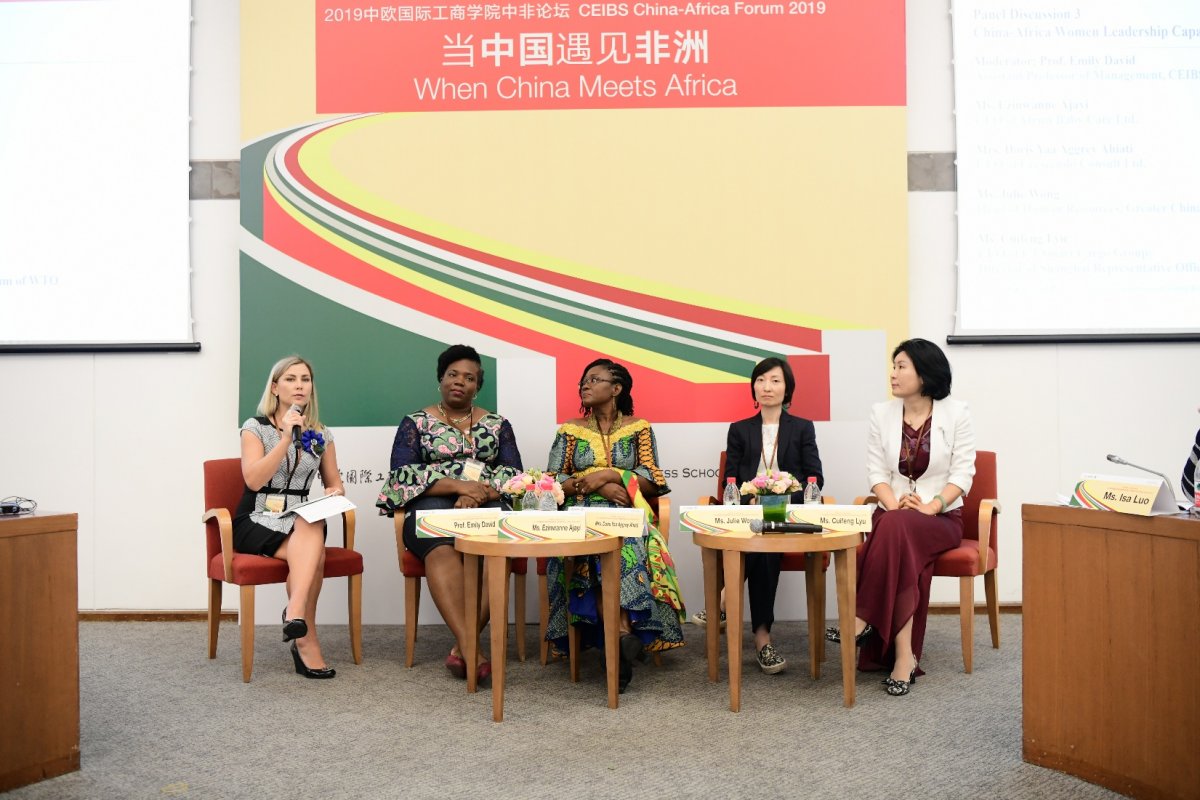 June 8, 2019. Shanghai – As part of CEIBS’ on-going commitment to serving as a bridge between China and Africa, the school today hosted the 2019 CEIBS Insights China-Africa Forum: When China Meets Africa at our Shanghai campus. China-Africa business relations have developed rapidly in recent years, and China is now Africa’s largest trading partner.

In 2018, trade between China and Africa reached US$204.2 billion – a year-on-year increase of 20%. More than 3,700 companies currently operate in Africa, and China’s direct investment in Africa now exceeds $46 billion USD.

In this context, the China-Africa Forum featured a series of keynote speeches and panel discussions exploring opportunities for strategic partnerships and business cooperation in areas such as trade, infrastructure, healthcare, industrialization, and agricultural modernization, as well as the role of women in leadership in both China and Africa. The forum also helped mark more than 10 years of investment by CEIBS in world-class business and management education in Africa.

During his welcome address, President Li pointed out that the forum came at a good time, with China-Africa relations being one of the most important topics of interest at the Second Belt and Road Forum for International Cooperation held last month in Beijing. He also used the opportunity to reaffirm CEIBS’ commitment to contributing China knowledge and to providing a platform for the enhancement of China-Africa business relations. “We are willing to take the social responsibility of CEIBS as always,” he said. “And to contribute to the economic cooperation between China and Africa and the development of the Chinese and African friendship.”

In her opening speech, H.E. Mrs. Xu emphasised that China-Africa cooperation not only promotes mutual benefit, but also creates favourable conditions for greater international cooperation with Africa. She also expressed appreciation for the efforts made by CEIBS to promote and enhance China-Africa cooperation. “For more than 10 years, CEIBS has been actively committed to cultivating African business leaders, caring for local youth groups, and training African women entrepreneurs,” she said. “It has grown into a good economic and cultural cooperation platform between China and Africa. I hope that CEIBS will continue to pursue excellence, participate more in China-Africa economic exchange and cultural cooperation, and contribute more wisdom to the cooperation of management education between China and Africa.”

In his opening remarks, H.E. Ambassador Osman stated that, “This forum is a special honour to the African continent, because it is our forum. It gives us, as a continent, a huge opportunity to once again boost and consolidate our ever growing China-Africa cooperation.” He also spoke about the critical role CEIBS has played in the socio-economic development of Africa and highlighted how, over the years, the school “has evolved into a powerful international platform that is profoundly contributing to the transformation of our nations and facilitating global economic cooperation through investment, academic excellence, and production of high calibre business leaders and entrepreneurs.”

CEIBS Assistant Professor of Strategy Richard Carney then moderated the first discussion panel of the forum on the theme of New China-Africa Strategic Partnership in the Context of China’s Belt and Road Initiative. Featured in the panel were Mr. Ato Sarpong, Executive Director of African Life Assurance and Former Deputy Minister for Communications of the Republic of Ghana; Prof. Wenping He, Professor and Research Program Director at the Institute of West-Asian and African Studies, Chinese Academy of Social Sciences; and Ms. Helen Hai, Goodwill Ambassador, UNIDO. During the course of the discussion, panellists examined some of the challenges and opportunities associated with the BRI in Africa, as well as some of the factors motivating African countries and businesses to participate in the BRI.

CEIBS Assistant Professor of Management Emily David hosted the final session of the day on the topic of China-Africa Women Leadership Capacity Building which included as panellists Ms. Ezinwanne Ajayi (CEIBS WELA 2019), CEO of Africa Baby Care Ltd.; Mrs. Doris Yaa Aggrey Ahiati (CEIBS WELA 2019), CEO of Crescendo Heights; Ms. Julie Wong (CEIBS EMBA 2011), Head of Human Resources, Greater China, Jones Lang LaSalle; and Ms. Cuifeng Lyu (CEIBS EMBA 2008), CEO of CJ Smart Cargo Group and Director of Shanghai Representative Office of China-Africa Industry Forum of WTO. During the panel, participants shared their personal and professional journeys and highlighted some of the challenges and opportunities for women in business in both China and Africa. They also offered their thoughts on initiatives organisations can take to support women and offered advice for how women can maximise their chances of success in business.

Prof. Tsamenyi closed the event by reflecting on the important role CEIBS has played in bridging two of the most important economic and cultural regions in the world. “One of the best decisions that CEIBS has ever made was to come to Africa,” he said. “What we have done in Africa, first, is to provide a platform for African executives who want to understand China and to come to China and, second, for Chinese executives and companies who want to understand and come to Africa. And, no other institution has provided this.”

The forum was followed by a networking reception for participants and guests of the forum, including more than 100 students from CEIBS’ top-ranked Global Executive MBA programme. The 2019 CEIBS Insights China-Africa Forum also coincides with the on-going CEIBS 25th Anniversary Celebration taking place at the school’s 5 campuses on 3 continents. For more on this and other events and activities related to the CEIBS 25th Anniversary Celebration, please visit our special CEIBS 25 page here.

The CEIBS Africa project was first launched in 2008 with a mission to prepare highly competent innovation oriented managers and executives who are capable of leading and growing their organisations in the increasingly dynamic African economic environment. From its Accra campus and other locations around Africa, CEIBS provides a range of management education programmes, including executive-level and company specific trainings. For more information, please visit our CEIBS Africa page here.