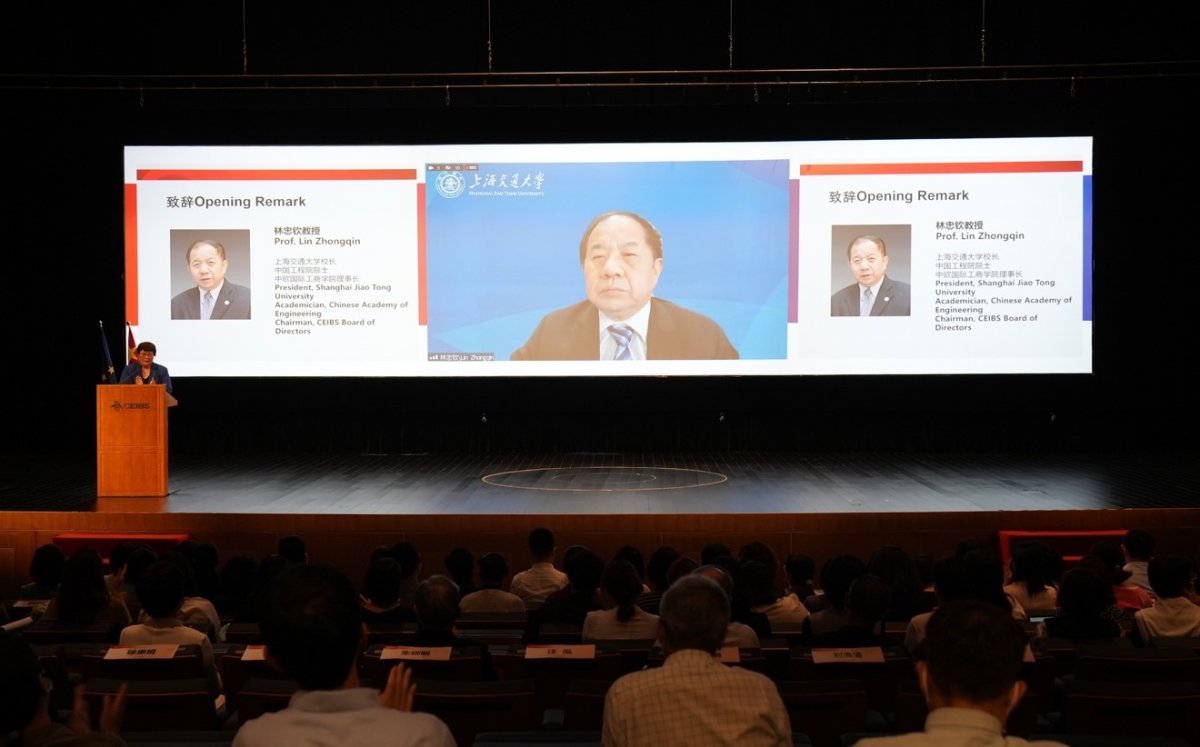 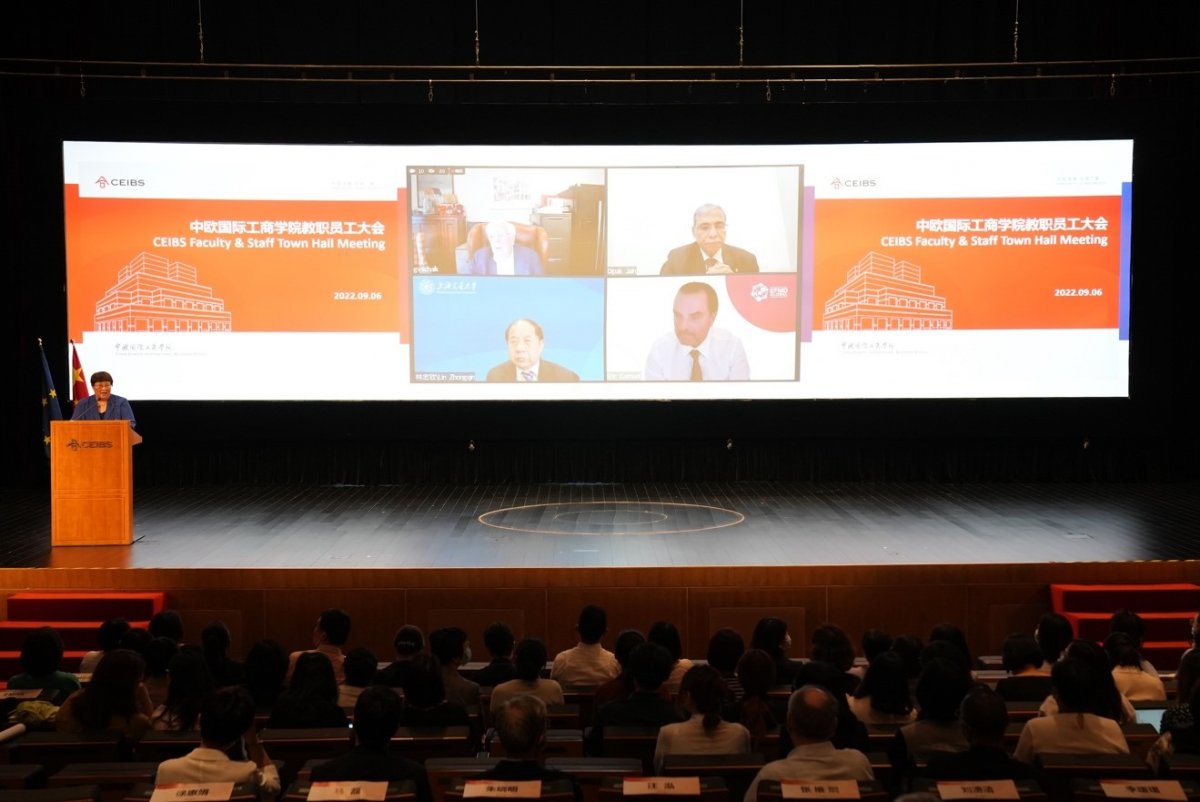 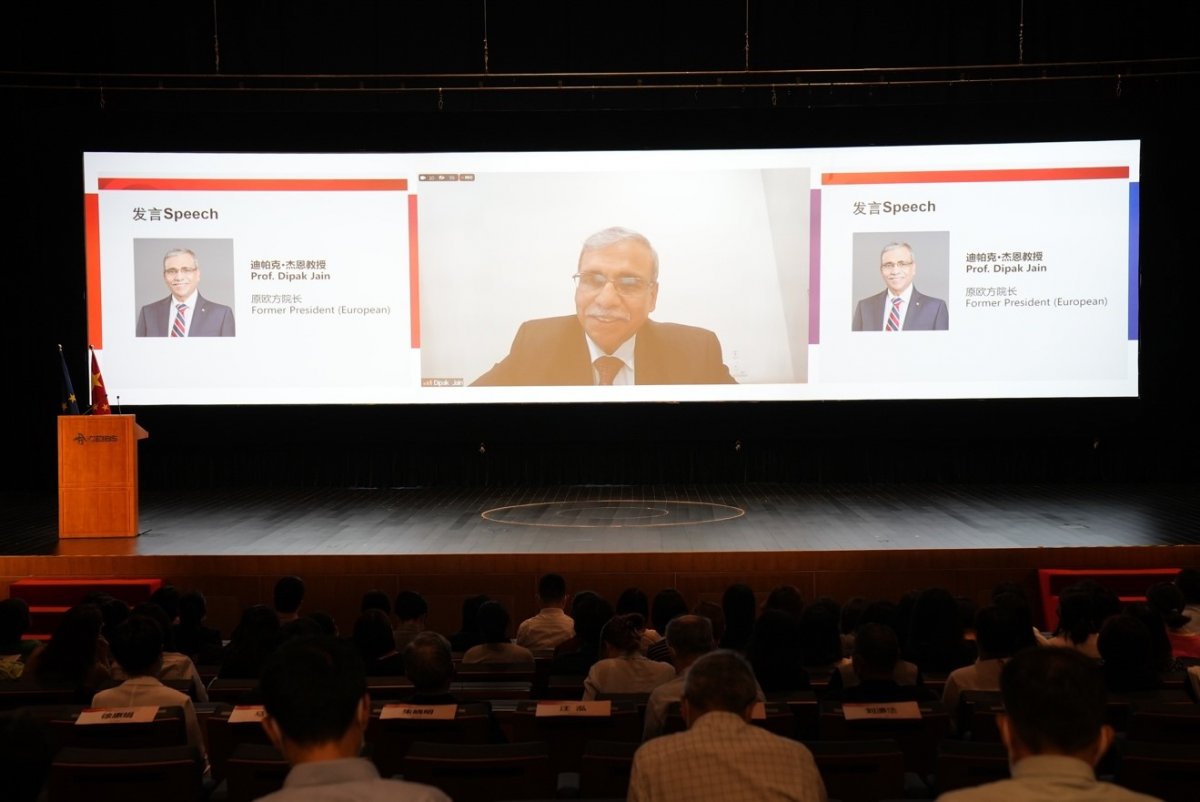 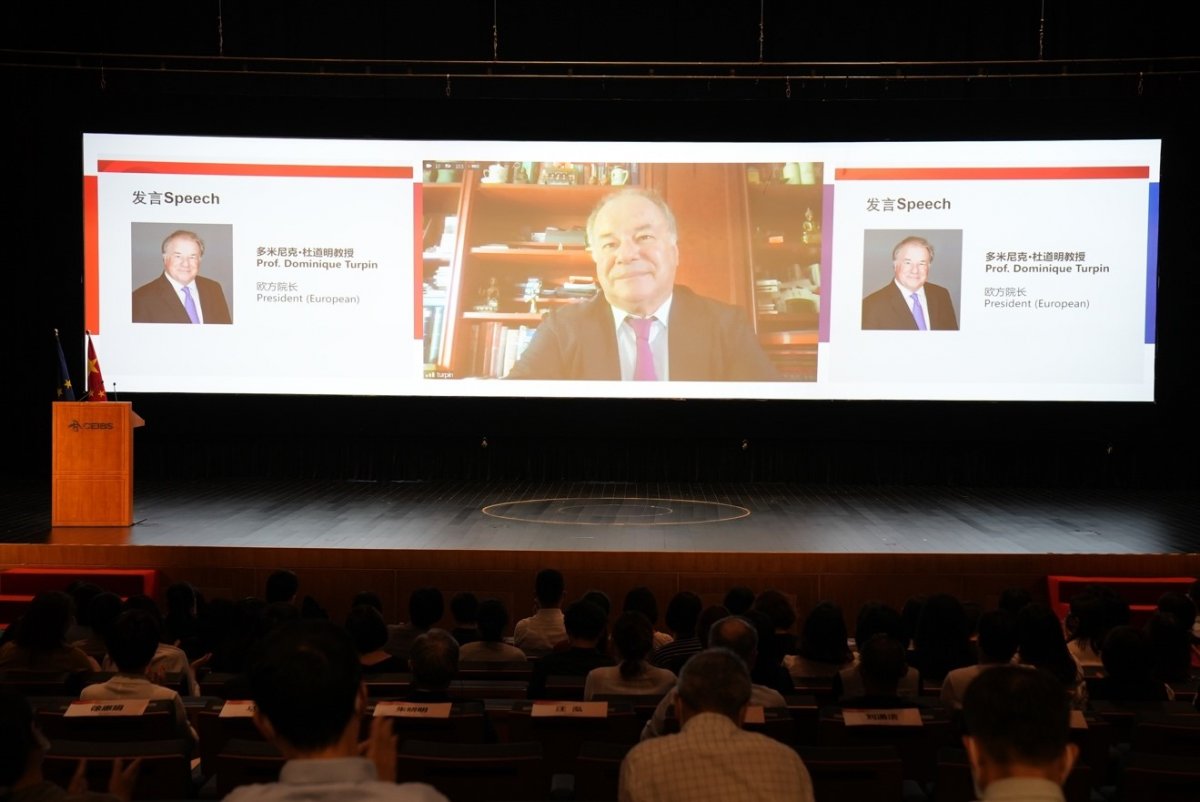 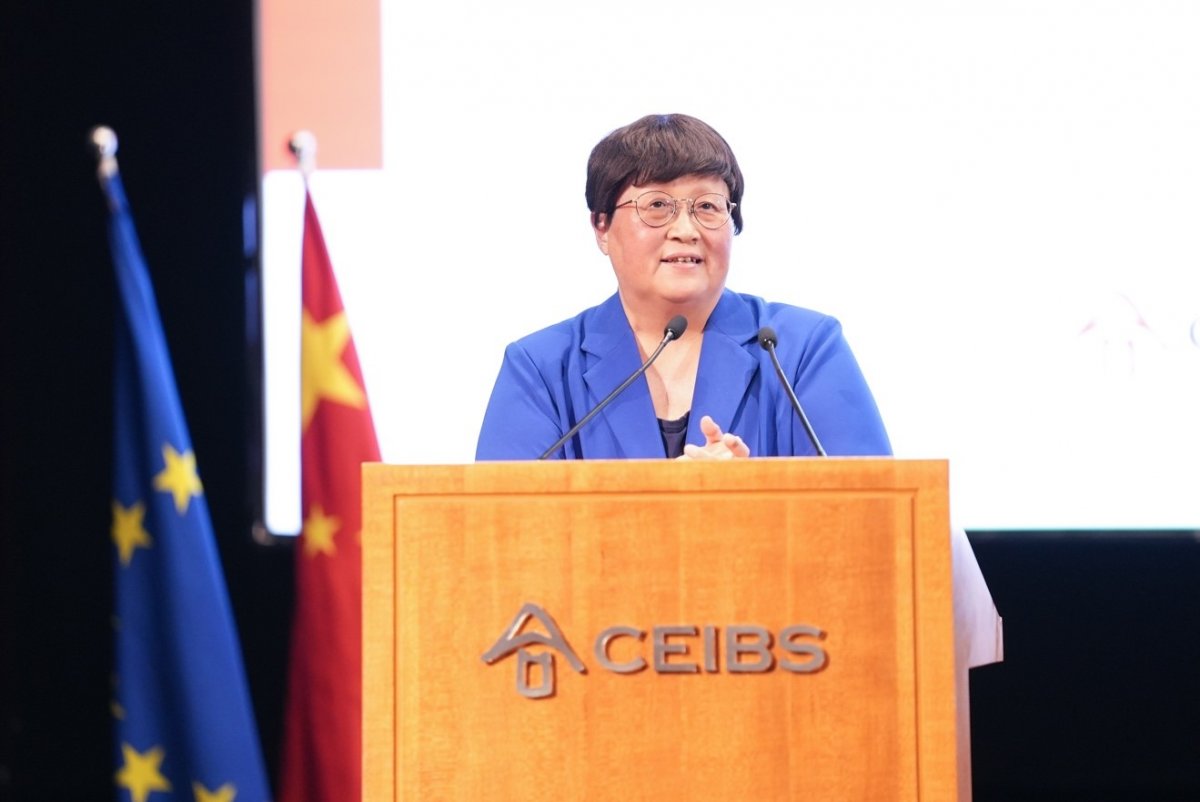 September 6, 2022. Shanghai – A special handover ceremony was held at CEIBS Shanghai Campus today to officially welcome Professor Dominique Turpin as the new CEIBS President (European). Prof. Turpin succeeds Prof. Dipak Jain, who steps down at the end of his term.

In his opening speech, Prof. Lin Zhongqin noted that Prof. Turpin has served on the CEIBS Academic Committee since the school’s establishment and is an outstanding scholar and business administrator with broad international influence. Prof. Lin also acknowledge Prof. Jain’s broad vision and innovative spirit in leading the school to a number of major achievements, including recent historic highs in the Financial Times’ global rankings. In addition, he said he hoped Prof. Jain will continue to assist in the school’s development by promoting knowledge creation in the fields of social security and pension finance.

Prof. Lin emphasized the wisdom and dedication of previous CEIBS Presidents (European) and their willingness to work closely alongside their Chinese counterparts in building a bridge for China-EU cooperation. Globalization, he stated, is experiencing a cold snap and the world is now facing huge uncertainties. As such, he continued, unity, tolerance and cooperation are needed to help the school overcome challenges and realize a brighter tomorrow. Moreover, he said that the school’s leaders will continue to strengthen CEIBS’ characteristics.

Prof. Lin added that he hopes Prof. Turpin will continue to promote the school’s European and international characteristics and actively practice CEIBS’ unique ‘co-culture’. Together with President Wang Hong, he said, he hopes Prof. Turpin will help build a governance model worthy of a top international business school and bring new ideas, a new vision and fresh energy to CEIBS.

Next, Dr. Van Schaik delivered a speech in which he noted Prof. Turpin’s extensive experience, admirable personality, decisiveness and ability to listen. Prof. Turpin’s many insights into the field of management education will be a great asset to CEIBS’ development, he added. Dr. Van Schaik also thanked Prof. Jain for his contributions to the school and for his efforts in helping to enhance CEIBS’ international reputation.

Prof. Cornuel then acknowledged the challenging period the school has experienced as a result of the COVID-19 pandemic. He added that, faced with a complex geopolitical environment, it is particularly important for everyone to work together to live in peace. To this end, he continued, CEIBS has played an important role in linking China and Europe. He also said he hoped the pandemic situation will resolve quickly and that he looked forward to the time when he will be able to visit his friends in China again in person. Finally, Prof. Cornuel expressed his thanks to Prof. Jain and extended his best wishes to Prof. Turpin.

Next, Prof. Jain offered an emotional thanks to everyone for giving him the opportunity to serve at CEIBS. During his five-year tenure, he said, he worked to enhance the school’s global reputation, strengthen its alumni interaction and enhance the school’s operations across its various campuses. He added that he believes CEIBS will operate smoothly under Prof. Turpin’s guidance and that he hopes its Zurich campus will host more programmes and activities and contribute to building a world-class school.

While rooted in China, Prof. Jain continued, CEIBS is also a business school built for the world, and its uniqueness rests in both its China depth and global breadth. In referencing the COVID-19 pandemic, he pointed out that planes always take off into (rather than with) the wind, and that difficult times will bring inspiration and unite the CEIBS community to strengthen the school’s position in the world. Although his relationship with CEIBS has changed, he said, his commitment to the school will remain the same as he continues to carry out teaching and research work as part of the CEIBS Institute of Social Security and Pension Finance. Finally, he emphasized that no challenge is insurmountable and that he looked forward to working together to create a better future for the school.

Prof. Turpin then expressed his gratitude for opportunity to serve as CEIBS President (European) and noted his deep relationship with the school. He further thanked Prof. Jain for his guidance, while acknowledging the many things they have in common as fellow Professors of Marketing. Over the past 28 years, he said, CEIBS has shown unremitting effort in realizing its achievements and he looked forward to working with President Wang Hong to maintain the school’s position amongst the best in the world and build a bridge for exchange between China, Europe, Africa and the world.

On behalf of the school’s faculty, alumni, students and staff, Prof. Wang Hong then extended a warm welcome to Prof. Turpin and expressed her thanks to Prof. Jain. She noted Prof. Jain’s kindness, wisdom and tolerance, as well as his mastery of not only marketing, but also strategic thinking and global vision. He has continuously emphasized the goal of “building CEIBS into one of the most respected business schools in the world” with both international influence and social responsibility. In addition, Prof. Jain has helped shape the school’s current five-year strategic plan and championed the concept of empowering and serving the school’s alumni over their entire lifetime, she said.

Prof. Wang Hong also noted the importance Prof. Jain has attached to the school’s ‘co-culture,’ case development and teaching, real-world learning and promotion of business education. Although he has stepped down from his role at President (European), she added, he will continue to play a significant role in the school as both President Emeritus and Chairman of the CEIBS Institute of Social Security and Pension Finance.

Prof. Wang Hong then noted Prof. Turpin’s accomplishments and experience as a scholar and business school leader. She added that his multicultural experience fits well with CEIBS’ internationalization and that his presence will help deepen the school’s European and international characteristics and expand its relationship with other global business schools. CEIBS plays an important role in serving as a bridge for China-EU exchange, she said, adding that she looks forward to working with Prof. Turpin and all CEIBS colleagues to write a new chapter in the school’s development.