Innovation and Entrepreneurship in the Digital Economy 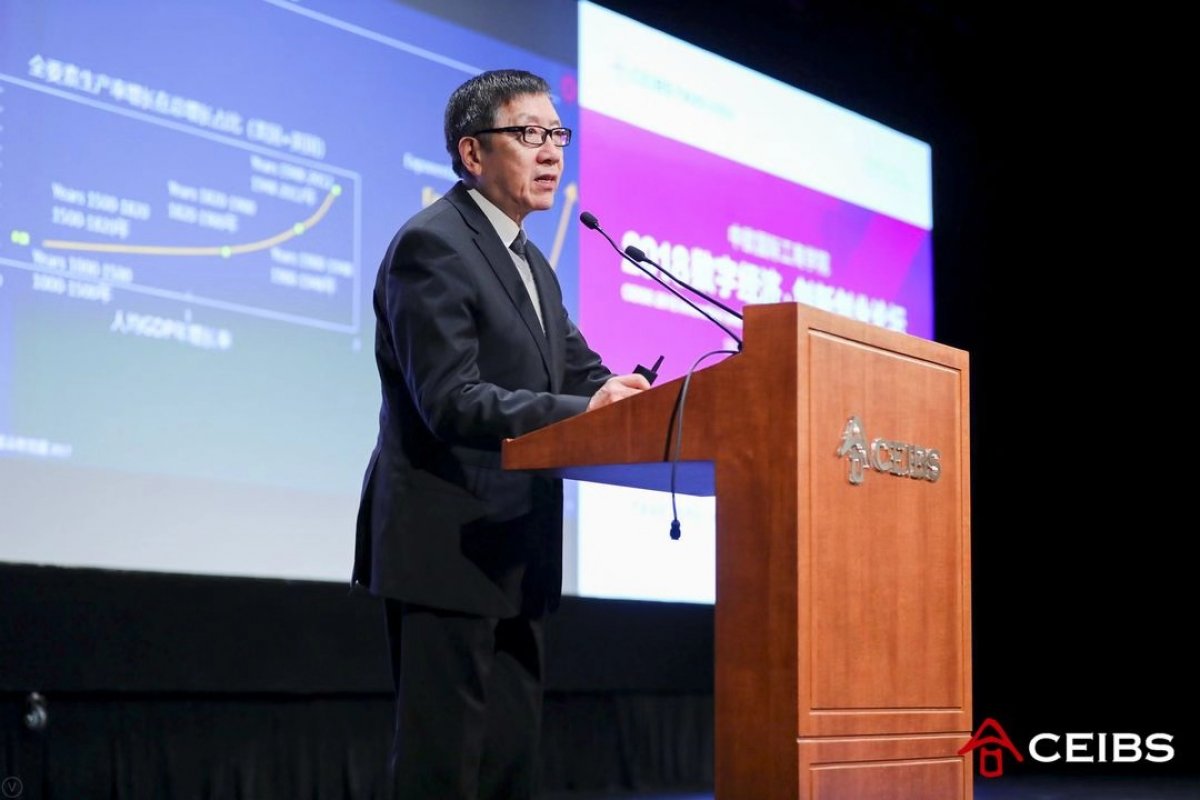 November 18, 2018. Shanghai – CEIBS President Li Mingjun was among the speakers that opened and laid the groundwork for discussions during the CEIBS 2018 Innovation and Entrepreneurship in the Digital Economy Forum held today at the school's Shanghai Campus. The forum is part of this year's annual reunion celebrations that attracted an audience of more than 700 people including experts and scholars on the digital economy, CEIBS leaders and faculty, alumni and students. Also among the speakers that opened today's forum were CEIBS Professor of Management, Zhu Xiaoming and a member of the Chinese Academy of Sciences, Prof. He Jifeng.

They set the stage for discussions to come throughout the day-long event, touching on the importance of the digital era which is now shaping every aspect of the global economy, and how it is tied to both innovation and entrepreneurship.

“This is a time of creation that is full of possibilities and rapid iterations,” President Li pointed out at the beginning of his speech. “When we talk about innovation and entrepreneurship in the digital economy era, we are looking at how traditional enterprises can find their core competitiveness within this new environment as well as how start-up digital enterprises are opening up new tracks and creating new opportunities.” The digital economy has not only changed the way in which information is transmitted and how knowledge is acquired, but also the model of the resources allocated and value created by traditional industries. It has transformed longstanding patterns of industrial competition and will reshape the core competitiveness of enterprises, forcing traditional industries to seek innovation and change, to find survival skills more suitable for the current environment. This is both an unprecedented challenge and a historic opportunity. In his address, President Li encouraged CEIBS alumni from all walks of life to seize this opportunity to change the world, to use their creations to illuminate the future, to express their passion and dreams, to develop their knowledge and expertise, for the benefit of China and the wider world. With the "China depth and global breadth” that a CEIBS education provides, he said, there are more opportunities and possibilities to create a better future.

In his speech titled “A Giant Leap from the Industrial to the Digital Economy”, former CEIBS President Zhu Xiaoming looked at the important role that the digital economy is playing in driving economic development. He pointed out that many countries around the world have positioned the digital economy at the height of their development strategy, with China's digital economy ranked second in the world. “There are only two types of companies in the current business economy – the typical commercial company and the highly digital enterprise. The former is entangled in the leap of the digital economy, experiencing a baptism at the basic market level. The latter is entering a synergistic and smart economy, and is on the way to the future," he said. “Entering the digital economy era, artificial intelligence is at your fingertips; and data, computing power, and algorithms have become hot spots in the artificial intelligence industry. As far as China's current situation is concerned, data is an area of strength, and computing power is catching up, but in terms of the algorithm China is not as strong, and the algorithm is precisely the most valuable part of artificial intelligence.” He also stressed that developing a new generation of apps, transforming the manufacturing industry's production process, or the business processes of the supply chain and service industries, is a way to improve efficiency at minimal cost.

Prof. Zhu is well known for his work on the digital economy and during today's forum both the Chinese and English versions of his book Emerging Champions in the Digital Economy were officially released. The English version of the book was selected as a "2018 Classic China Project".

Prof. Zhu's speech was followed by input from another academic, Prof. He Jifeng, who is a member of the Chinese Academy of Sciences. He touched on “Knowledge of the Digital Economy: Something One Must Know in Contemporary Society”. He focused mainly on development trends in the digital economy, the explosion in technological innovation, the disruptive impact of digital technology, ad gave examples of how innovation can impact enterprises. He pointed out that since the beginning of the last century, the global economy has undergone tremendous changes, and technology has become the main driving force for global growth. It is estimated that by 2020, the number of IoT devices will be three times that of the population, which puts higher demand on interconnection. “Connectivity is a very important part of the digital economy,” said Prof. He.

He also shared his views on the future of the digital economy: by 2025, the population connected to the internet will increase by 2 billion up to 3 billion; artificial intelligence will generate new value of US$5-7 trillion for white-collar work. He added that there was still a lot of room for improvement; for example in the future human genetic sequencing may be available within an hour at only a cost of $100; driverless cars may significantly reduce the number of deaths resulting from car accidents; North American oil production could increase by 100-200%; and the percentage of solar and wind power generation's contribution to the grid could climb to 16%.

He explained that the digital economy is inevitable, arising from the existence of high-end products, increasing human capital and international trends. It will bring excess value to consumers and is attracting a lot of capital, he noted. There are currently 176 unicorns in the field, an indicator that the digital economy is not just being encouraged by the government, but is also being driven by the market. For China, the development of information technology will become a new model to promote economic transformation and support innovation-driven strategies.

"The development of information technology is a model of contemporary scientific and technological innovation, and it is a vivid display of innovation-driven development," Prof. He concluded. He also pointed out that the development of information technology is equivalent to a 'big bang'. Originally impacting only a few people, it is now closely related to every aspect of human life. Currently, this big bang model is at the stage of "human, machine, and material integration" – human beings are subjects, objects are carriers, and computers are the means of transmission. The digital realms that will disrupt the economy in the future include: mobile internet, artificial intelligence, the Internet of Things, cloud technology, advanced robotics, driverless, genomics and energy storage technologies.