On April 13, 2019, CEIBS 25th Anniversary Celebration kicked off with parallel ceremonies in Shanghai and Beijing. Throughout the rest of the year, we will be hosting a series of inspiring forums across Asia, the US and Europe to give our global alumni a platform to spark discussion, share insights, and look back on the past and into the future. Presently, both CEIBS MBA and EMBA programmes have made it into the UK Financial Times’ latest global top 5 list. The steady rise in our global rankings owes a great deal to alumni’s outstanding contribution and class committees’ dedication. As part of our 25th anniversary events, we will host 2019 Class Representative Homecoming Day on Shanghai Campus on June 22, in appreciation of class committees’ unwavering support to the school. CEIBS Alumni Relations Office cordially invites each class in all programmes to send one class representative to the exciting one-day forum and cultural events. On the Reunion Day, you will be not only briefed on the school’s latest development and future plan, and a series of 25th anniversary events, but also treated to speeches by eminent professors and celebrities, and a wonderful performance at midsummer night. We are looking forward to seeing you on Shanghai Campus in June to rekindle old friendships and forge new ones! 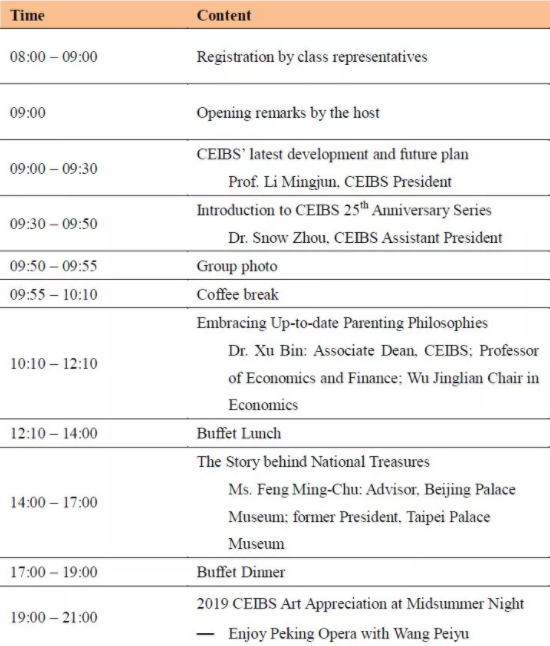 Dr. Xu Bin is Professor of Economics and Finance, Wu Jinglian Chair in Economics and Associate Dean (Research) at CEIBS. He received his B.A. (1986) and M.A. (1989) from Fudan University, and Ph. D. (1995) from Columbia University. Before joining CEIBS, Dr. Xu was a tenured professor at Warrington College of Business, University of Florida. He has also taught as a visiting professor at Darden School of Business, University of Virginia, and worked as a consultant for the International Monetary Fund (IMF) and the World Bank.

Dr. Xu teaches macroeconomics, Chinese Economy, and international finance at CEIBS. He has been invited to give speeches to executives of multinational enterprises and Chinese companies on issues related to the global and Chinese economies. Dr. Xu is a four-time recipient of the CEIBS Teaching Excellence Award (2009, 2010, 2014, and 2016).

After four decades of reform and opening up, China has scored impressive achievements in modernization of industry, agriculture, national defense, and science and technology. What Chinese people lack is not “abundance of material wealth”, but “up-to-date ideas”, particularly parenting philosophies, as evidenced by a general anxiety about childrearing and waves of teenage suicides. Whether this generation of Chinese parents can develop an up-to-date parenting philosophy will produce an immeasurable influence on the future of the Chinese society. In his speech, Prof. Xu Bin will elaborate on several up-to-date parenting philosophies that Chinese parents need to embrace, analyze the parenting method and strategy for children at different age brackets, and compare Chinese and western parenting. Rather than offer some tips that may bring your children a worldly success, Prof. Xu will tell you how to maintain efficient interaction with your children so that they can pursue a meaningful life.

The Story behind National Treasures

Ms. Feng Ming-Chu is Advisor, Palace Museum in Beijing and former President, Palace Museum in Taipei. She graduated from the Department of History at Taiwan University in 1974, and received a master’s degree from Taiwan University in 1978. Later, she joined the Taipei Palace Museum. As a research fellow co-hired by the Taipei Palace Museum and Academia Historica, she worked on the Collation of the Draft History of Qing for six years. Afterwards, she served successively as a secretary, editor, associate research fellow and research fellow at the Section of Books and Literature at the Taipei Palace Museum. In 2005, she acted as Head of Section of Books and Literature. She was promoted to Vice President, Taipei Palace Museum in May 2008 and President in September 2012. She stepped down and retired on May 20, 2016. From 1980 to 2010, she taught at private universities, including Tamkang University and Soochow University, and the Department of History at Chengchi University. From 2010 to 2013, she acted as Director-General of the Chinese Association of Museums in Taiwan for two consecutive terms. Presently, she serves as President, Glorious Jewel Group Feng Ming-Chu Cultural and Historical Studies Institute; Advisor and Adjunct Professor for EMBA in Global Fashion at the College of Management, Taiwan Normal University.

Ms. Wang Peiyu is a prominent Peking opera performer and a follower of Yu School Laosheng (senior male role) founded by master Yu Shuyan. She graduated from the third Master’s Degree Programme for Peking Opera Performers of the National Academy of Chinese Theater Arts. Presently, she is a national first-class actress at Shanghai Jingju Theater Company; a member of 12th CPPCC Shanghai Committee; a deputy to the 15th Shanghai Municipal People’s Congress; Vice Chairman, 12th Shanghai Youth Federation; a member of the Executive Committee of 15th Shanghai Women’s Federation. As a disciple of Peking opera masters like Wang Siji, Zhu Bingqian, Tan Yuanshou, Li Xixiang and Zhang Xuejin, Ms. Wang is known for her handsome and scholarly stage appearance, exceptional vocal skills, and insightful portrayal of characters. As a leading figure of the new generation of Peking opera performers, she won the Best Performance Award at the National TV Contest of Young Peking Opera Performers, China Theatre Plum Blossom Award, and Leading Role Award of Magnolia Stage Awards. In addition, she was recognized as “2013 Leading Talent of Shanghai”, one of “2015 China Top Ten Cultural Celebrities”, “Inheritor of Intangible Cultural Heritage in Shanghai”, and “Excellent Expert of the Ministry of Culture”. From 2017 to 2018, she was honored as “Women Pace-Setter in Shanghai”; in 2018, she was chosen as “Person of the Year in the Educational Community of Shanghai”.

While striving to keep alive traditional Peking opera pieces, she has been committed to popularizing the Peking opera through various platforms and channels in ways that cater to the habits and preferences of youngsters. In 2009, she staged “Tribute to Classics” traditional Peking opera performance and Wang Peiyu Peking Opera Concert, and started delivering “Fun with Yu” lectures on Peking opera across China. Since 2017, she has attended a huge number of variety shows, including “Who Can Who Up”, “Reader”, “Transboundary Singer”, “Cheers for Traditional Chinese Drama”, “Day Day Up”, “First Lesson”, “Chinese Story”, “Chinese Good Story”, “Sound of My Dream”, “Everlasting Classics”, “The Letter”, “Roundtable”, “Legacy of China”, “Roast!”, “A Bright World”, and “National Treasure”. So far, she has built a large following. Her efforts to spread the traditional Chinese culture in an entertaining way aim to bring people who are unaware of their interest in the Peking opera into the theatre to feel its charm.

Billed as “Boss Yu” in the Peking opera world, Ms. Wang is a sheng player; an optimist and pessimist; a moderate reformist and conservative activist; an inheritor of traditional culture in the trendiest way; a leading figure of the new generation of Peking opera performers.

At the Appreciation of Peking Opera Melodies, Boss Yu will review the history of the Peking opera, and introduce rudimentary knowledge about four performing skills (singing, recitation, acting and acrobatics). She will elaborate on main Laosheng genres, from Yu Sansheng to Tan Xinpei and from Yu Shuyan to Meng Xiaodong. To spell out the principle of the Peking opera that “every sound is a song and every movement is a dance”, she will sing parts of classical pieces and perform a demonstration of hair-swinging, beard skills, and sleeve skills.