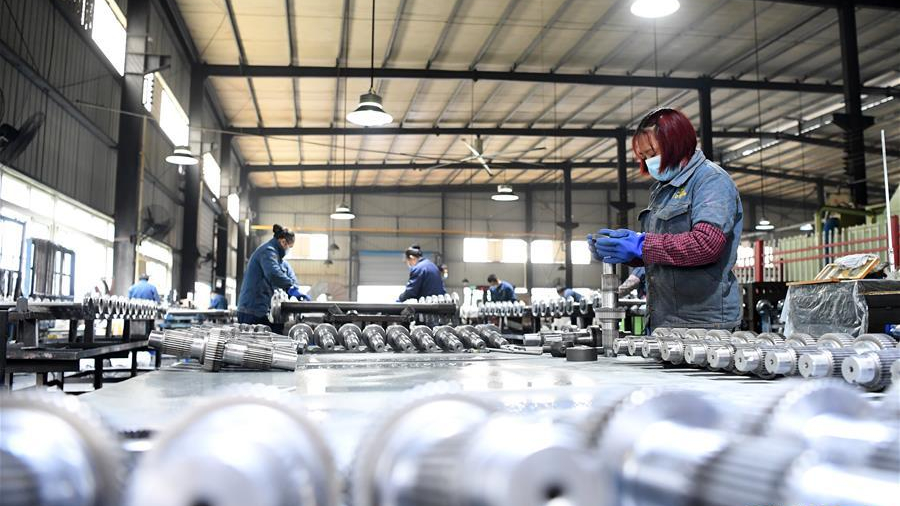 Since the outbreak of the novel coronavirus epidemic, China has taken a series of measures, such as the lockdown in Wuhan, the extension of the Spring Festival holiday, and the delayed resumption of work, which have inevitably taken their toll on the country’s macro-economy.

The circulation of raw materials, labor and other factors of production slowed during this time; business activities such as logistics, production, sales, and bill paying were affected; and some enterprises even stopped work outright.

In particular, small and micro enterprises in the catering, hotel, tourism, film, entertainment, and transportation sectors, as well as related services and bricks-and-mortar retail sectors suffered the most.

Small and micro enterprises account for more than 90% of China’s market participants, and the vast majority of these are micro-firms, such as shops, service providers and wholesale and retail traders (mostly individual businesses or unregistered self-employed persons).

Presently, China is home to more than 110 million small grocery stores, which form an important part of the national economy and are a main provider of steady employment. According to the National Bureau of Statistics, each self-employed person provides an average of 2.37 auxiliary jobs, with at least 300 million jobs to be found in 100 million stores, taking into account the presence of even larger micro-businesses.

On December 30, 2019, Premier Li Keqiang gave instructions at the executive meeting of the State Council on “developing the ‘store economy’ and creating more jobs”, noting that “the ‘store economy’ is conducive to stimulating consumption, urban construction investment and employment”.

Stores may be small, but the multiplier and spillover effects they produce are huge. Like people’s capillaries, only if each one is unblocked, can life persist.

Many stores, however, have weak a capability to fend off risks. Since the outbreak of the novel coronavirus epidemic, the “store economy” has encountered an existential crisis, suffering from the impact on both the supply and demand side.

A recent grassroots survey of 995 small, medium and micro businesses shows that more than 85% of enterprises may have less than three months’ worth of cash on hand. According to data from Zhejiang MYbank, 72.7% of shops have been seriously affected by the epidemic, meaning they are unable to operate normally or have been forced to shut down. The proportion of shops with fewer than 20 employees that are unable to operate normally is now about 23% higher than those with more than 300 people. A large number of shops now face a looming capital crunch. In addition, the failure of many stores to pay their workers has also led to an exodus of employees since the Lunar New Year holiday.

In response to the situation, the Central Government has taken a number of financial assistance measures to guide financial institutions to increase credit support in several areas, industries and enterprises, as well as to social and livelihood sectors mostly affected by the epidemic.

The Circular on Further Strengthening Financial Support for the Prevention and Control of the Coronavirus Pneumonia Epidemic, issued jointly by the People’s Bank of China (PBOC), the Ministry of Finance (MOF), the China Banking and Insurance Regulatory Commission (CBIRC), the China Securities Regulatory Commission(CSRC) and the State Administration of Foreign Exchange (SAFE), clearly states that, “it is necessary to increase the efficiency of examination and approval, reduce the cost of loans, improve the arrangement for the renewal of loans and increase the number of credit loans and medium and long-term loans to help enterprises tide over difficulties”.

However, most shops, comprising mainly individual businesses, have no credit record in traditional financial services. On top of that, they also lack any collateral, making it hard for them to obtain loans from large banks. In this case, fintech may offer a solution.

The popularity of QR code payment means small and micro merchants realize the importance of the digitalization of transactions. Taking Ant Financial Services Group as an example, Alipay payment collection data provides accurate credit profiles for merchants, enabling them to establish and accumulate credit records, thus enabling them to make up for their lack of credit record in traditional financial services and greatly improve the availability of credit.

Through the use of big data, fintech enterprises have cut spending on information, risk control and default penalty mechanisms, and reduced the cost of financing and allowed fresh “blood” to flow smoothly to each capillary in the financial sectors.

Relying on big data risk control technology, Zhejiang MYbank uses the original 310 model (three minutes per application, one second for a loan, and no manual intervention in the whole process) to serve 22 million small and micro firms and self-employed businesses, 80% of whom are exclusive customers and are first-time borrowers.

The latest statistics show that more than 50 million stores have secured credit lines that do not require collateral, effectively lowering the funding threshold. At the same time, retail business rates have picked up across the country, especially for those backed by credit lines, reflecting the role of targeted support provided by fintech firms.

Finance and technology: a call for better integration

Fintech has played a significant role in serving stores during the epidemic, but its potential has been constrained in many ways. For example, traditional financial institutions can absorb deposits with stable funding sources at a low cost, while internet banks have higher financing costs. If the short-term default rate rises, however, it will cause fintech firms to face greater liquidity risk and bad debt pressure. In addition, with the number of stores experiencing funding gaps surging as a result of the epidemic, fintech firms have relatively limited capital to provide adequate support. Only by strengthening the integration of finance and technology can we effectively and accurately rescue small and micro businesses affected by the epidemic.

Traditional banks should actively cooperate with fintech players to give full play to their respective advantages. Given that fintech firms have a big advantage in getting customers online, while banks have more money to lend, the cooperation between the two sides could help funds flow precisely to credit-quality stores.

On the other hand, the central bank can provide re-lending, permit the issuance of small and micro special bonds or interbank asset securitization products, and give targeted backing for internet banks to increase their support for store loans, so as to improve the efficiency of the central bank’s special funds. In addition, internet banks are being encouraged to release the restriction of shareholder attributes through secondary capital debt, and encourage shareholders to increase capital directly, which could also play a multi-channel role in supplementing capital.

During this special time, regulatory innovation should be kept up in time to break through unnecessary policy constraints and give full play to the potential of fintech in serving stores. For example, a full range of online banking services could be promoted and experimented within severely affected areas such as Hubei province. Under the premise of technical support and risk control, pilot banks could open I-type bank accounts for individual users remotely, enabling small and micro business owners and store operators in these areas to open a fully-functioning bank account without leaving their home, and to handle various financial services such as collections, transfers, and loans.

In addition, the overall reduction of businesses costs is also imperative. Compared with medium and large-sized businesses, small and micro firms, including individual businesses, generally face problems with small trading volumes, low gross profit rates, poor anti-risk abilities, and insufficient bargaining power, making them more likely to be ignored in the implementation of the payment and fee reduction policy. Only by paying more attention to these problems and providing targeted preferential policy, can they accelerate recovery pace after the end of the epidemic.

This article originally appeared on CGTN’s website here. Oliver Rui is the Parkland Chair in Finance at CEIBS. For more on his teaching and research interests, please visit his CEIBS faculty profile here.