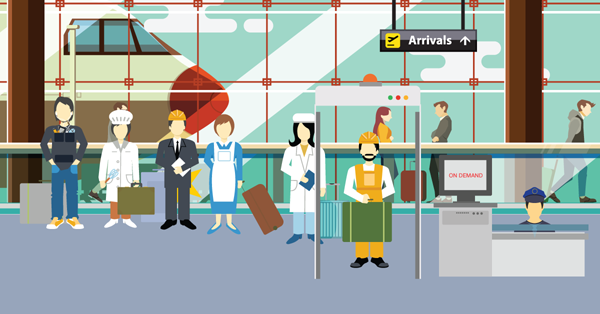 Clearly the time has come for a long-term solution to Europe’s broken immigration system – one that looks at the issue from an economic perspective, not an emotional one. Nowhere is this more obvious today than in Germany. Angela Merkel, unable to form a coalition government more than three months after her party’s shaky retention of power, is still feeling the after-effects of anti-immigration sentiment that kept her from an impressive victory on September 24. But the problem, as we all know, is not Germany’s alone.

A Pan-European Demand-Driven Immigration System could well be the answer. There needs to be a standardized system put in place across the entire Schengen area. It would be fuelled by demand from receiving countries, returning some of the border control anti-immigration factions vociferously argue they have lost. For those who now fear that their communities are being overrun by outsiders coming to take their jobs, as they stand by powerless to ebb the ever increasing flow, this would go a long way towards appeasing their concerns. But even more important than the positive impact this would have on influencing public opinion, this system would target migrants to a country's needs. Those from all skill levels would be welcomed as long as there was a specific job opportunity that cannot be filled by a European. This would, in turn, increase their chances of long-term integration into the society.

This approach would clarify the current mixed signals and confusing messages about immigration now emanating from Europe. But let me stress that, to be effective, it would need to be applied in parallel with another system that addresses the needs of refugees or those seeking asylum. A Pan-European Demand-Driven Immigration System focuses on the economics of immigration, seeking to find solutions to problems such as an aging Europe’s need to access enough labour to maintain economic development. Immigrants can be a solution. Europe needs roughly half a million immigrants a year to keep its economy on track. But there is currently no systematic method in place across the EU to effectively accomplish this task.

Historically Europe has been seen as less attractive to talented workers than other parts of the world that proactively encourage people to immigrate. Indeed, Europe’s current approach has resulted in it attracting lesser-educated migrants than those who go to the US. A demand-driven immigration system that matches the economic needs of the country with the skills of those seeking to immigrate would pave the way for a much smoother assimilation of migrants into society.

So how, exactly, would this Pan-European Demand-Driven Immigration System work? Well first of all, it needs to be locally driven, with jobs identified at the local level. Who better to know what jobs are needed on the ground than those living in the communities? This approach would reduce the likelihood of resentment as locals would feel empowered to make decisions that directly affect their lives. At the same time, there has to be cooperation at the country level as well, with the same rules applied across the region or migrants would simply apply to countries where it is easier for them to qualify.

The immigration issue has festered for far too long. It is time to find a new way of doing things, and we need to act quickly. It would be constructive, I believe, to begin by gathering information on the approach taken by countries that already have a selective, demand-driven system (US, Canada, Australia) and the current practices in key European countries such as Germany and France. How do other countries successfully handle non-refugee immigrants? What are the effective systems they have in place? We would also need a clear understanding of the European job market, as well as a huge digital platform to support the data that will be generated and mined for this.

The private sector, which would clearly benefit from increased efficiencies in the labour force, would need to work closely with the government in funding this project. The good news is that, in this era of big data, the costs of mining the information are not expected to be prohibitive. We would also need to engage civil society to ensure that privacy laws are not violated. So we need to act quickly, but with care – and with just as much attention paid to perception as to reality.

For example, the delicate issue of migrants’ mobility must be addressed. While it is vital to avoid even the slightest perception of corralling migrants into only certain ‘approved’ areas, measures would need to be put in place to ensure that the system works efficiently for both migrants and host countries. There would have to be mechanisms in place to control movement across borders as this mobility needs to be a gradual process. One approach could be the requirement for migrants to remain in the European city in which they are initially employed for a minimum period (e.g. three years). After that they would be granted countrywide residency, and after 10 years they would be free to live and work anywhere within the EU.

This gradual implementation is vital because of the historical context and the current debate, which feeds off anti-immigration sentiment. Public education and acceptance is vital to the project’s success. The initial goal could be set at 20 to 50 thousand immigrants a year, with specific job offers, for the entire Europe. Their success stories and successful integration into society would help change the existing negative perception of immigrants and show the benefits of a systematic approach to the issue. Once this cultural change occurs, the numbers may be gradually increased in line with economic growth forecasts and the job market.

I am convinced that this project stands a fair chance of working. We can either give it a try or keep doing what we have always done in the past, yet expecting different results. As the saying goes, that’s the very definition of insanity.

This column was first published by the World Economic Forum (WEF).