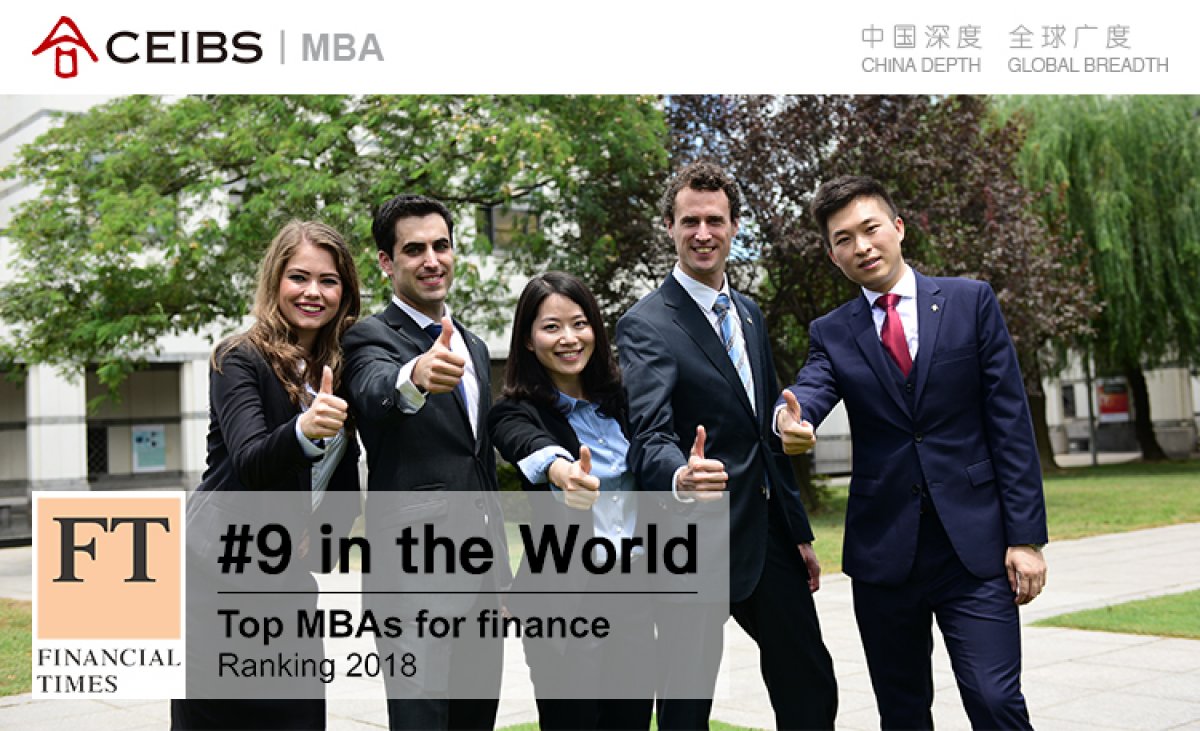 May 7, 2018. Shanghai – The CEIBS MBA has moved up 14 spots to #9 in the Financial Times ranking of the world’s top 50 MBAs for finance.  Breaking into the top 10 today also secures CEIBS MBA’s place as Asia’s #1 MBA for Finance. The top 10 are: Stanford, Wharton, Chicago Booth, Harvard, New York Stern, MIT Sloan, INSEAD, Cambridge Judge, CEIBS and Columbia.

“Shanghai is widely recognised as the most dynamic financial centre in Asia, with vast potential for growth on the world stage,” said CEIBS Associate Dean and MBA Director Professor Juan Fernandez. “CEIBS’ outstanding performance breaking into the top 10 is a reflection of not only Shanghai’s economic development, but also the school’s continuous efforts and its academic rigour.”

The annual ranking assesses MBA alumni working in finance three years after graduation.  It measures a range of criteria such as salary increase, percentage of alumni working in finance and international mobility.  Aside from the overall ranking of #9 globally, CEIBS MBA also ranked highly in metrics such as salary increase (176%), value for money (#7), and female student percentage (#6).

From an academic perspective, CEIBS supports students seeking to further develop their careers in finance or break into the industry by offering a concentration in finance, in which students select from a range of related electives that now range from Financial Statement Analysis to The Future of Global Banking and the Case of China.  Meanwhile, the MBA Class of 2019 have also been making an impact through student-led initiatives such as the annual career trek to Hong Kong (related story) and winning joint 1st prize at Nanyang Business School’s annual M&A case competition (related story).

Careers in finance post-graduation continue to be among the most sought after for MBA graduates, with just over 30% of alumni from the MBA graduating class of 2017 securing roles in the financial services industry.  Among alumni whose career development in financial services has been shaped by CEIBS and China are Ted Haley (MBA 2016) and Urs Casagrande (MBA 2017) (related stories).

CEIBS has more than 20,000 alumni from more than 80 countries worldwide, and has provided a broad range of management programmes for more than 130,000 executives both at home and abroad. CEIBS’ faculty team is uniquely equipped to deliver a combination of China Depth and Global Breadth in both teaching and research.

CEIBS has campuses in Shanghai, Beijing, Shenzhen Zurich and Accra.