April 26, 2018. Shanghai -“If I had to choose a Game of Thrones House to belong to, it would definitely be House Targaryen.  It’s an easy choice, because they have dragons,” says CEIBS MBA 2010 alumnus Joseph Yu.  He is reflecting on the craft of bestselling, internationally renowned writer George RR Martin. The author of the worldwide phenomenon that is Game of Thrones recently announced Joseph as the winner of his inaugural Terran scholarship, which includes a ticket to join Martin and a host of award-winning novelists at the prestigious science fiction and fantasy writing workshop, Taos Toolbox, in the US, this June. 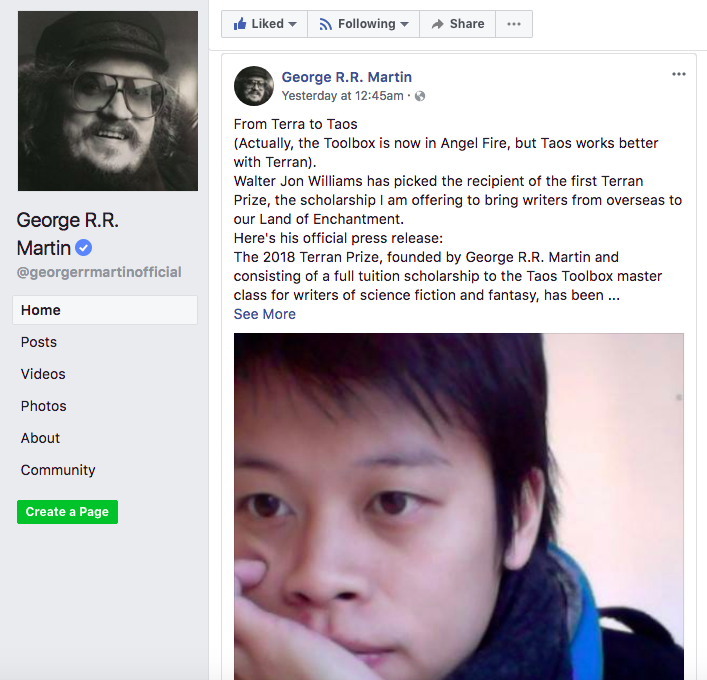 Joseph took time out of his schedule to share with MBA Admissions the story behind the novel that won him the scholarship to New Mexico.  After talking to us about his collaboration with Associate Professor of Strategy Dr. Weiru Chen to publish a groundbreaking book on Platform Strategy, he reveals how Game of Thrones helped him bond with his CEIBS classmates.

Born in Taipei, and educated in Vancouver, Joseph was working in real estate when he enrolled at CEIBS in 2008. Like the heroes of many fantasy adventures, Joseph had a mundane day job. It was at night (much to the annoyance of his girlfriend) that he would turn to his real passion: drawing comics and writing stories. 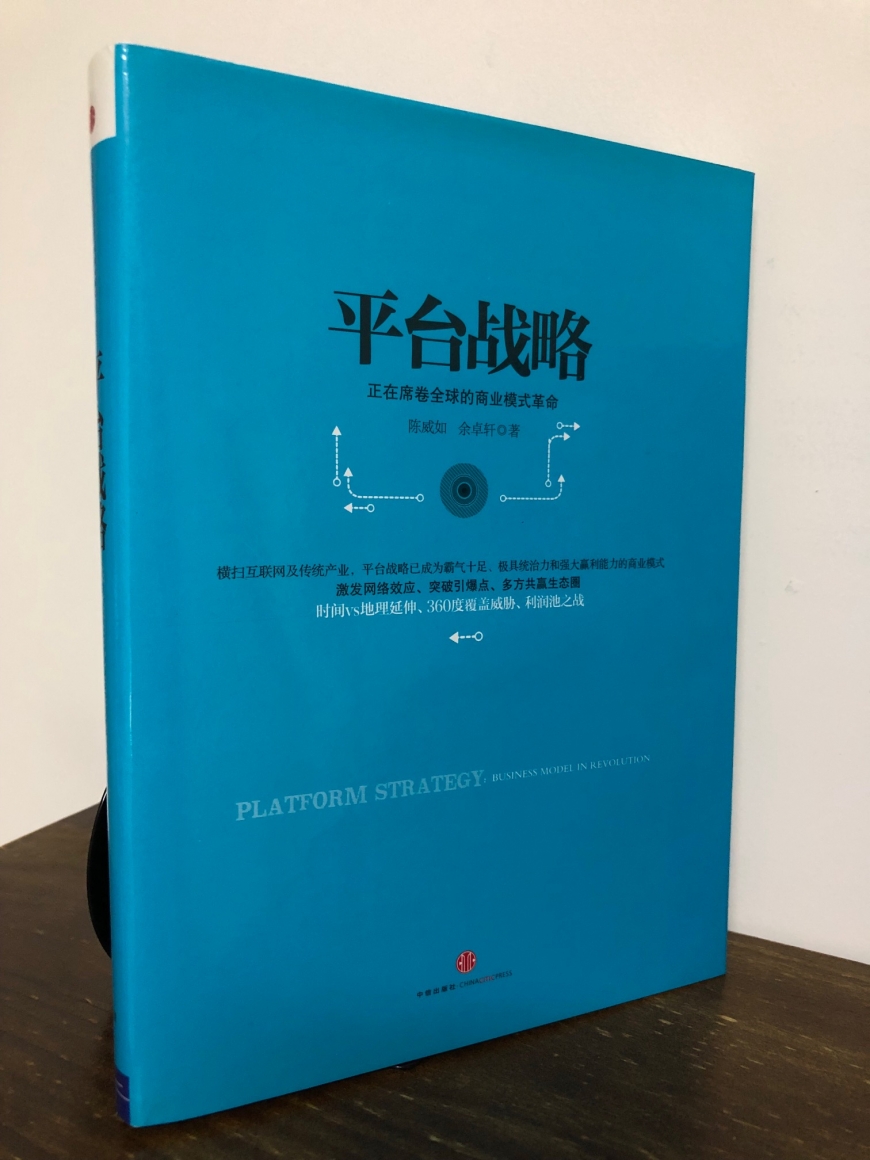 For Joseph, the motivation for writing is the same as the one that drove him to do an MBA – he wants to be a positive influence on the world.  He just needed the right opportunity to get started.  “In 2010 there were no business books on platform strategy, but from taking Prof. Chen’s class I was so inspired by the concept that I approached him and asked if he would be interested in writing something together,” reflects Joseph. “That decision has since led me to co-author a book that has sold over 200,000 copies in China. But, more importantly, it has given me the freedom to become a full-time author.  Because of this I can honestly say that CEIBS was a massive turning point in my life.”

Clearly a fan of Game of Thrones before winning the Terran prize, Joseph describes George RR Martin as the fictional writer of our time.  Long before the smash HBO series hit television screens, Joseph recalls introducing Martin’s books to classmates at CEIBS. “One of my good friends on the programme was the President of our Student Committee: Devon Nixon. I remember giving a copy of the first book in the series, A Song of Ice and Fire, to Devon at the start of finals study week. Walking around campus on those hot sunny days, everyone was in the library cramming.  Apart from Devon.  He was sitting on the grass, unable to tear himself away from the Game of Thrones book! He was completely hooked, as any reader would be, but Devon nailed all his exams anyway!” reflects Joseph with a smile.

Joseph, who was elected President of the Being Globally Responsible Conference (BGRC) at CEIBS, left an even more positive legacy at the school.  The two-day annual conference is designed to shine a spotlight on global CSR topics.  During Joseph’s tenure, the school invited the New York Times bestselling author of Confessions of an Economic Hitman, John Perkins, to deliver a keynote speech. “I remember being blown away by his book.  Specifically how corporate greed has led to underdeveloped nations taking out substantial development loans that saddle them with high debt and no hope of ever being able to make the repayments,” says Joseph. His passion for striving for a better world goes some way towards explaining his fascination with sci-fi and fantasy.  Reading the words George RR Martin wrote to briefly introduce the Terran Prize, it is easy to see why Joseph picked up his pen:

When astronauts look down on Earth from orbit, they don't see borders, national boundaries, or linguistic groups; they see one world, a gorgeous blue globe spinning in space, streaked with clouds. I don't know if humanity will ever reach the stars (though I hope we will), but if we do, it won't be Americans who get there. It won't be the Chinese or the Russians or the British or the French or the Brazilians or the Kiwis or the South Africans or the Indians or the folk of any other nation state either. It will be humanity.

In 2017, based on a survey, the Financial Times published the list of skills leading employers most wanted from MBA graduates.  Storytelling was among the top five, alongside utilizing social media to benefit business, coaching others, financial forecasting and big data analysis.  Given his background as a published author, Joseph often shares his know-how with MBAs from non-creative backgrounds.  They explore ways to improve their storytelling abilities by drawing inspiration from their own lives.  “We all want to read stories that are unique and compelling.  I wouldn’t sell any books by writing about my commute to work, for example,” he says. “We can all tell more exciting stories by leading more exciting lives, which means taking more risks and taking the road less travelled.”

Taking a risk and the road less travelled literally took Joseph to Antarctica during the hectic term two core module schedule at CEIBS. He won a competition in 2009 through “2041”, an NGO devoted to preserving Antarctica. Each year the organization takes around 50 students, all from different backgrounds, to Antarctica. The trip is designed to reinforce the importance of the Antarctica Treaty, an agreement to protect Antarctica’s natural resources, which is due to expire in 2041. “Missing two weeks of any term at CEIBS is a no-no.  I almost failed my Managerial Accounting class and had to study like crazy to pass an exam to make up the missed time.  Luckily the calculated risk paid off,” he says. 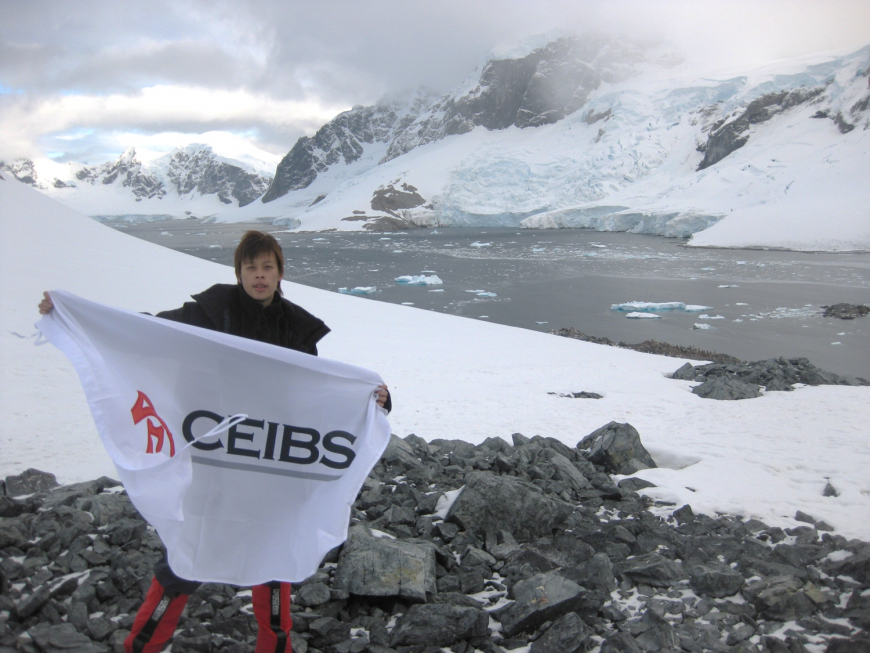 The novel that won Joseph the inaugural Terran prize finds its origins in his time at CEIBS.  “I went on exchange to Copenhagen in 2009 and learned about a writing competition for traditional Chinese language markets that was being held in Taiwan. I locked myself in my dorm room for two weeks and emerged with my first Mandarin novel, The Mirrored Truth,” says Joseph. “I won the runner-up prize, and the book, which was published in 2010, remains close to my heart.  Hence I translated it into English as my submission for the Terran prize”.

In winning the inaugural Terran prize, Joseph represents a recent spike in global interest in science fiction novels from China. Liu Cixin’s The Three-Body Problem series has been subject to strong interest from Amazon, who want to turn it into the next billion-dollar streaming sensation. “A growing number of Chinese authors are now getting their works published in English. Like The Waste Tide, by Stan Qiufan Chen; The Redemption of Time, by Baoshu; The Gift, by Regina Kanyu Wang (published in Galaxy's Edge online magazine); and The Reincarnated Giant: An Anthology of Twenty-First-Century Chinese Science Fiction, which will be published by Columbia University Press in September this year,” says Joseph. “I think, ultimately, we have all been watching Hollywood and reading American novels for so long that eventually people have developed an appetite for something fresh.  China is both an ancient power and a rising one that has much to offer the world.”

Along with packing his bags for the Taos Toolbox workshop, Joseph’s next big goal is to get his work published in English, starting with some short stories. He is currently working, out of a small studio, on a futuristic comic – Split Earth Saga. The graphic novel was recently the subject of a successful Kickstarter campaign that raised over USD22,000 in funding.

“I have been incredibly lucky to have successfully re-oriented my career towards the creative industry.  One piece of advice I would like to share is: follow your heart. Back then I didn’t know if writing stories in my dorm room at CEIBS would eventually lead to me becoming a published author.  But I knew that even if I failed, at least I would have followed my heart.  So, either way, the risk was always going to be worth it,” says Joseph. 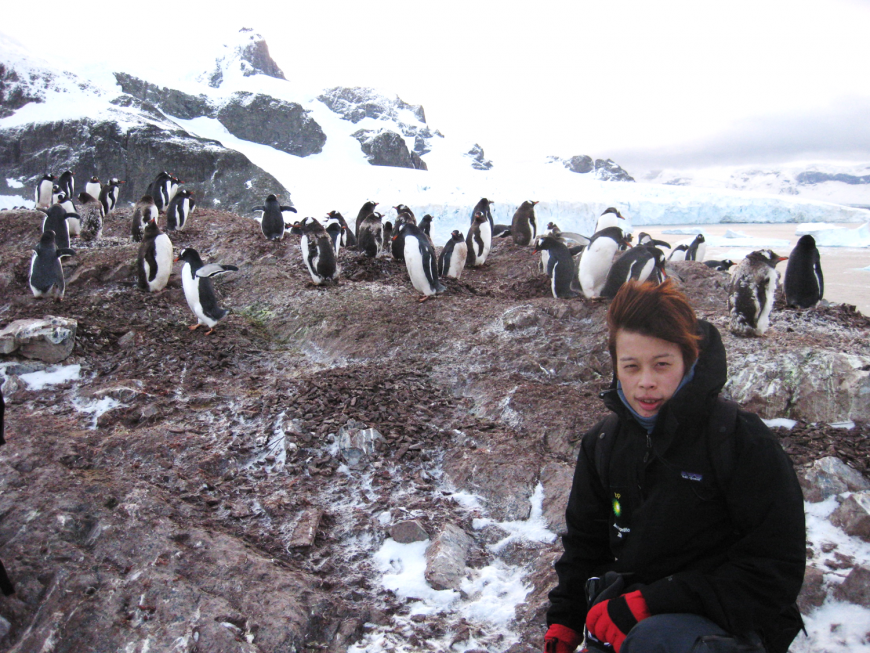