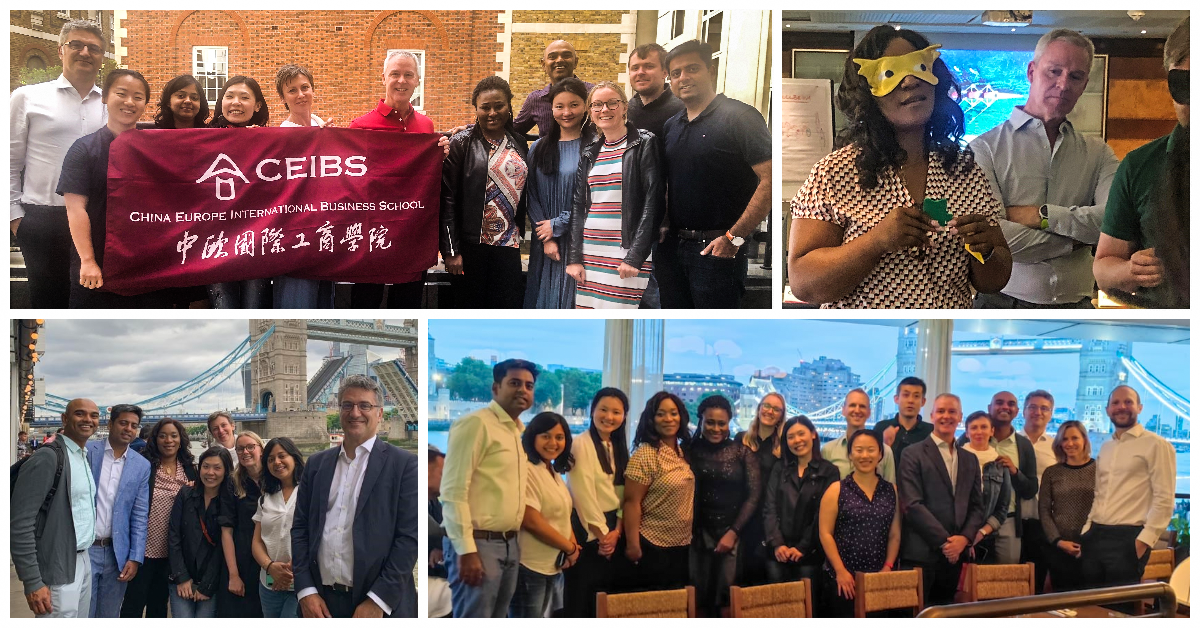 June 24, 2022. London, UK – CEIBS Alumni UK Chapter met at the Leonardo Hotel Royal London City on June 24 and 25 for a workshop on Building and Leading High-Performance Teams and Cultures. Hosted by CEIBS Zurich Campus CEO Dr. Robert Straw, there was a dynamic mix of CEIBS alumni in attendance, many who had studied together, some friends, and some newcomers to the chapter.

The group of alumni started the workshop on Friday 24 June. Encouraged by Dr. Straw and his co-host, Lisa Bevill, Director of the Center for Health, Well-Being & Happiness at IE, it did not take long for the group to begin sharing their professional and personal challenges. The aim of the workshop was to reflect, discuss, and share ideas on how to overcome these challenges and ultimately, become a stronger team leader.

With attendees working in a variety of senior positions in areas such as logistics, consultancy, and finance, the group had many experiences to share from both their current and former teams and work experiences. Having created a trusting atmosphere, participants enjoyed giving one another advice on handling challenging situations that arise as a leader.

“Each time that we host this workshop, we meet a new group of CEIBS alumni, and each session is unique and rewarding in its own special way. This was a very mature and self-aware group and there was a high level of reflection and a lot of communication. We give out worksheets to guide people in what to aim for in the session and as I walked around, I saw sheets brimming with notes and that was great to see,” said Dr. Straw.

The group played a game called ‘Colour Blind’ where they had to solve a puzzle whilst blindfolded. The game encourages communication, teamwork, and leadership. Though the group did not solve the puzzle within the 25-minute time limit that had been set, the game provided plenty of talking points about the importance of having a leader and how clear communications are key to teamwork.

After day one of the workshop which took place close to the Tower of London, the group took a walk along the River Thames before heading to Tavolino Bar and Kitchen for dinner, where they were joined by other members of the CEIBS UK Alumni Chapter. The chapter enjoyed an Italian meal with views over Tower Bridge and also welcomed new members to the chapter, three former students who did their exchanges at CEIBS and who were delighted to share tales from their time in Shanghai with the group.

Day two of the workshop saw the group reflecting on their strengths, encouraged by Lisa and Dr. Straw to see their strong points and actively use them to shape the kind of leader they are. The group used the VIA Survey of Character Strengths to help them recognize their strengths and reflect on them in the session.

After this, participants headed out for a ‘walk and talk’, strolling alongside the River Thames whilst discussing their challenges with a peer from the group. “The idea of the walk and talk is that it takes people out of the ‘usual’ setting for discussions and every time we do this, we see people open up and share much more naturally and readily than in traditional meeting room settings. We always encourage workshop participants to try the walk and talk with their teams to change things up a little,” said Dr. Straw.

The second day wrapped up on Saturday afternoon with some participants deciding to be each other’s ‘accountability partners’ so that they could check in on one another’s progress and make sure they were committing to the actions they had set for themselves during the session.

The Building and Leading High-Performance Teams and Cultures workshop series is open to all CEIBS alumni, and makes its final stop in Paris on September 30 and October 1.