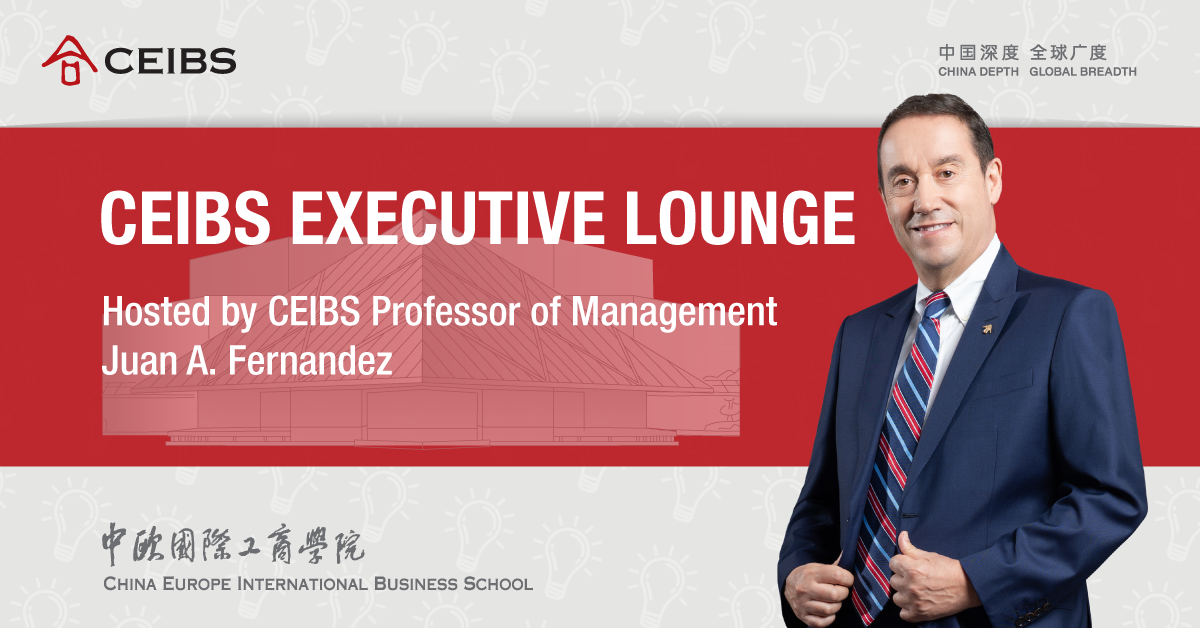 April 29, 2021. Shanghai – Embracing the new, abandoning preconceptions, and focusing on people were amongst the crucial aspects of doing business in China shared by guests during recently-produced CEIBS Executive Longue video series.

Hosted by CEIBS Professor of Management Juan Antonio Fernandez, the series assembled a stellar line-up of business figures who shared some of their vast experience of doing business in China.

Jonathan Woetzel, Senior Partner at McKinsey​ and Director, McKinsey Global Institute, discussed multinational companies’ (MNCs) progress in China. Mr. Woetzel, based in China since 1985, noted that MNCs have been very successful in the Chinese market.

“By and large, they are getting more share and higher revenues than they do in other markets – in consumer markets, multinationals have twice the share they have in the US,” he added.

Mr. Woetzel further stated that the key for MNCs is to focus on taking advantage of China’s strengths.

“Playing in China means playing at scale and speed, and leveraging the domestic supply chain, supply base and people,” he said.

He also commented that China offers many opportunities for innovation, but that it is important to remember what innovation actually is.

“It’s a change that creates commercial value, something the customer appreciates and the company can build a competitive advantage around,” he noted.

Despite the recent slowing of globalisation, Mats Harborn, China President of Scania​ China Group, said he believes that MNCs have a strong future in China.

“I still believe the golden age lies ahead of us,” he added.

Mr. Harborn further emphasised that China is still developing in areas which will bring advantages to foreign companies.

“The next big change which is going to happen is strict enforcement of modern rules and regulations, which will create an even more level playing field,” he said, adding, “I think for European companies, we thrive in this environment where we compete on equal terms.”

Korn Ferry Chairman, Asia Pacific Charles Tseng said for any firm in China, hiring the right kind of people is even more crucial than in other regions due to the fast pace of development.

“They could be Western or Chinese, but they have to be flexible. The market is changing so fast – you need to be agile,” he said.

Mr. Tseng emphasised that companies and individuals must adapt themselves, to fit the environment, not the other way around.

“You understand the market, you don’t try to change it,” he said.

“I would like to make a bold prediction – many companies will fail or not achieve their goals because the Chinese market is very competitive,” he said, adding, “You need to have a very unique product or service which your Chinese competitors cannot do well at a competitive price.”

Former Executive Director and Current Board Member of the Shanghai​ Community Centre, Zhen Zeng, spoke of the importance of internationalism and also of the common pitfalls she has seen foreign executives new to China fall into. She explained that many come with some kind of pre-knowledge which often turns out to be wrong and that coming with a very open mind is the best approach.

“You must be willing to dive deeper and understand there is a big and ancient social evolution that has happened over thousands of years shaping what you’re seeing today,” she said.

Ms. Zeng added that behaviour is only the tip of the iceberg, and that those who are “willing to dive down deep will make themselves more successful.”

“When managing multicultural teams, the first thing I would say is to celebrate the differences, but don’t stereotype,” she said.

She added firms often made the mistake of forgetting the point of recruiting diverse talent.

“Don’t fall into the trap of hiring people who are diverse, then training them to be the same as everyone else,” she warned.

Finding the right people for your firm is about identifying the personality of your company, its values, and working out what kind of mind set an ideal employee would have, she explained. At the same time, she said, it is also important to think about retaining, not just attracting, talent.

“It’s important the culture in the company continues to provide fertile ground for talent to innovate,” Ms. Chew added.

Continuing the emphasis on human interactions, Tidalwave Partner and FAO Global Head of APAC Strategy Cameron Johnson said it is important to adapt to Chinese culture as fully as possible to get the best out of Chinese teams.

Ultimately he said, learning the language offers benefits impossible to gain by any other means, adding that it also shows commitment.

“It changes the conversation, it shows you’re not just someone who is here for a short term stint, you’re here and invested into the country – that makes an impact,” he said.

Mango CEO East Asia & India and CEIBS Global EMBA 2012 alum David Sancho said that brands can no longer describe themselves as global without being in China.

“China is three years ahead of Europe,” he said, adding, “China has a unique ecosystem which is completely different to the Western world [and that the] systems cannot be combined – your strategy in Europe cannot be copied and pasted to China.”

Apple Greater China Vice President and Managing Director Isabel Ge Mahe said certain trends in modern China’s working patterns were unhelpful, such as Jack Ma’s 996 concept – the idea that employees should work from 9am to 9pm six days a week.

“I hope that companies realise that in order for people to do their best work, they need to feel that they have time to energise themselves,” she said.

Finally, in a year where the online world dominated more than ever due to COVID-19, Palfinger Vice President, Sales and Service, North America, Alberto Cavaggioni, emphasised that the vital nature of offline experiences should not be forgotten.

“I believe it is important to meet people and understand body language – it is not sufficient only to interact via digital tools,” he said.