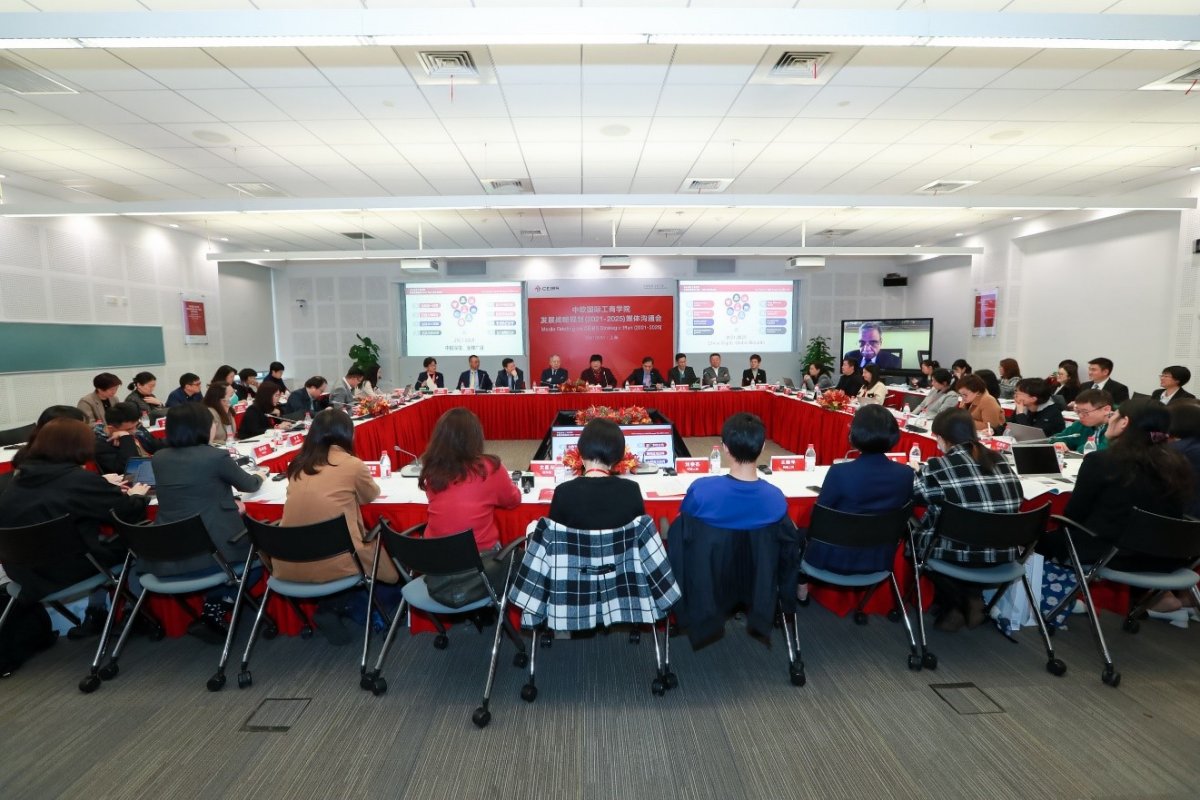 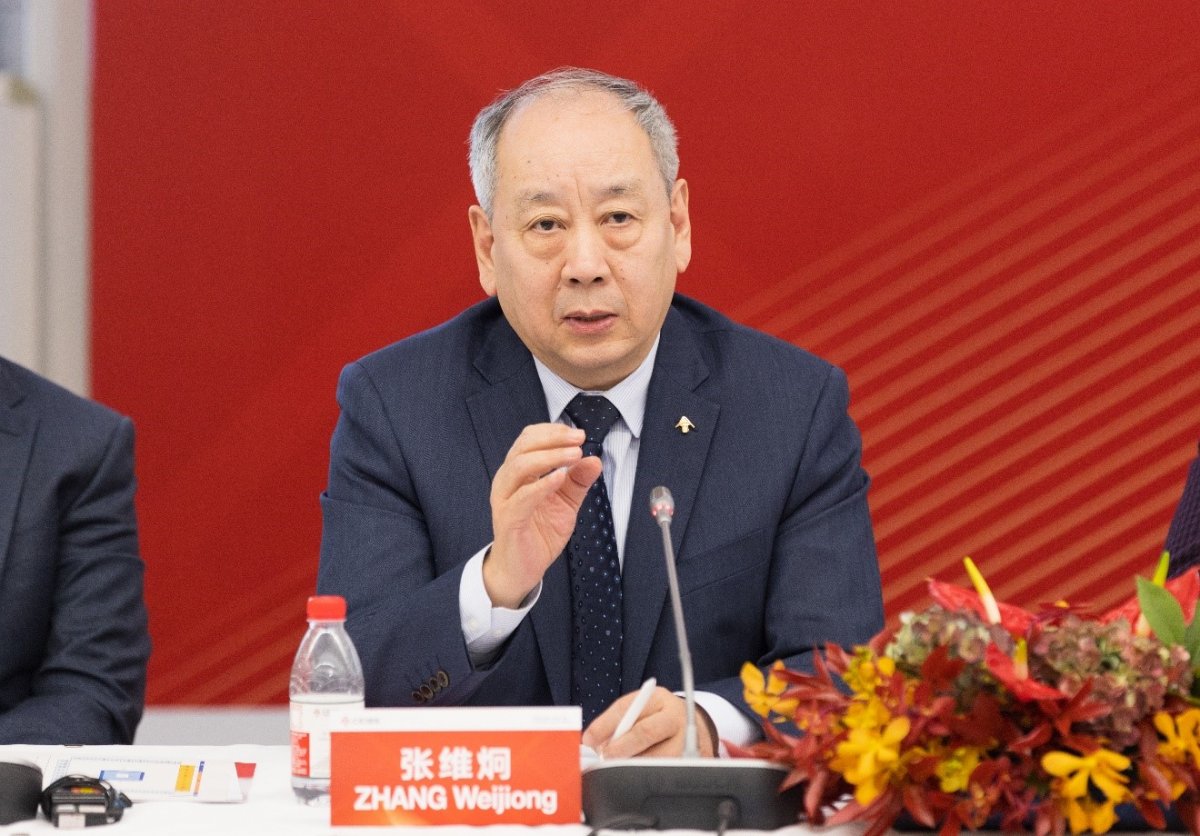 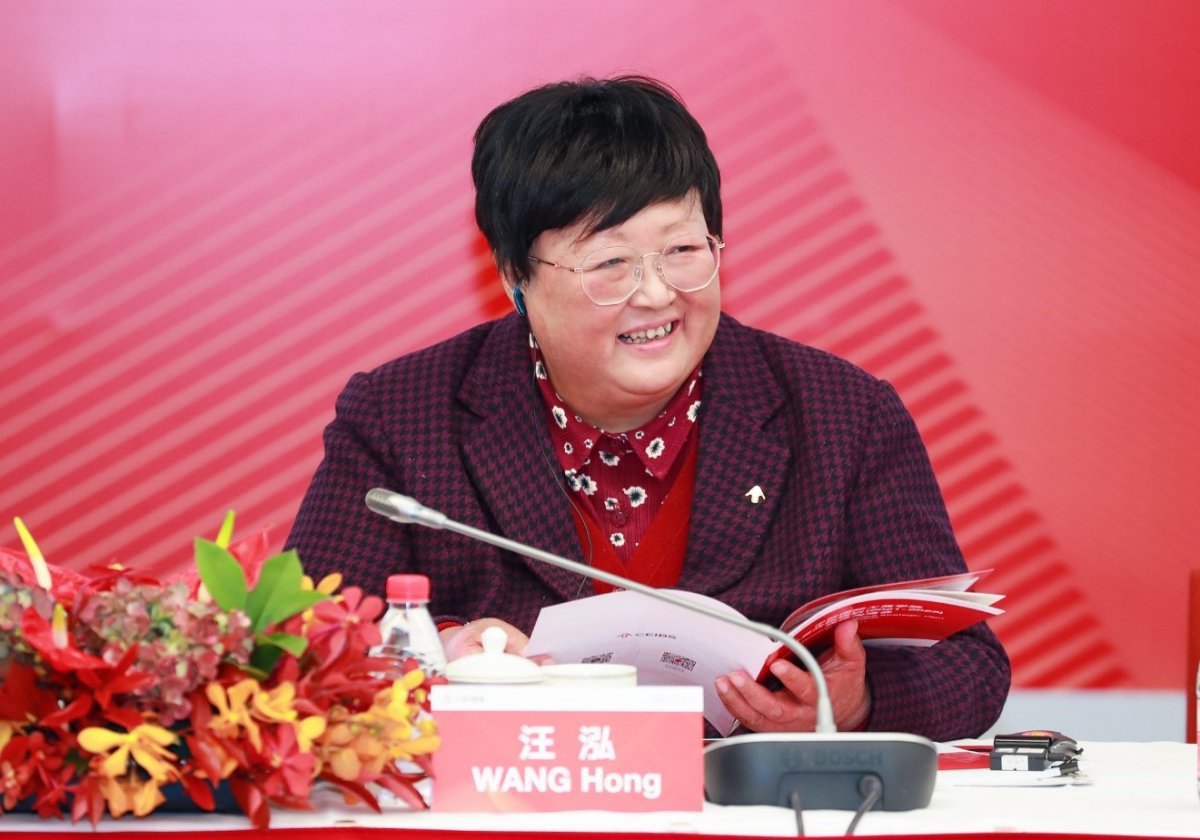 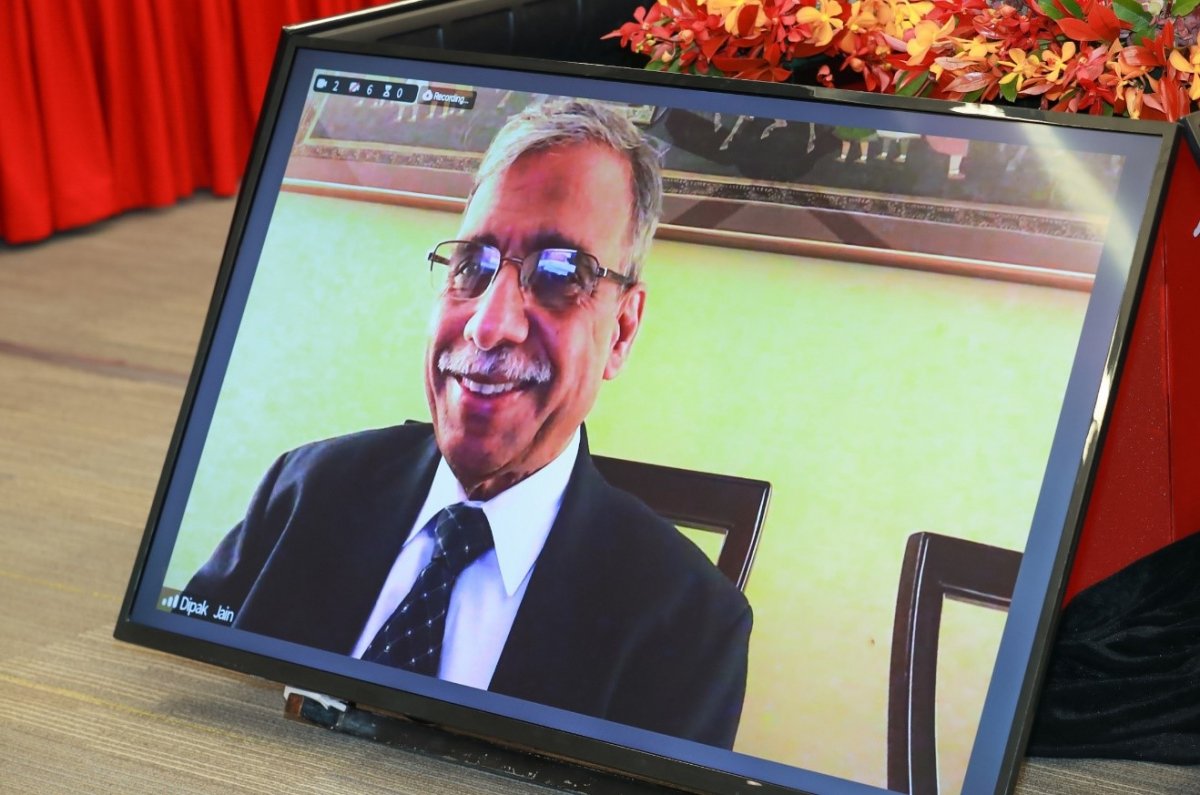 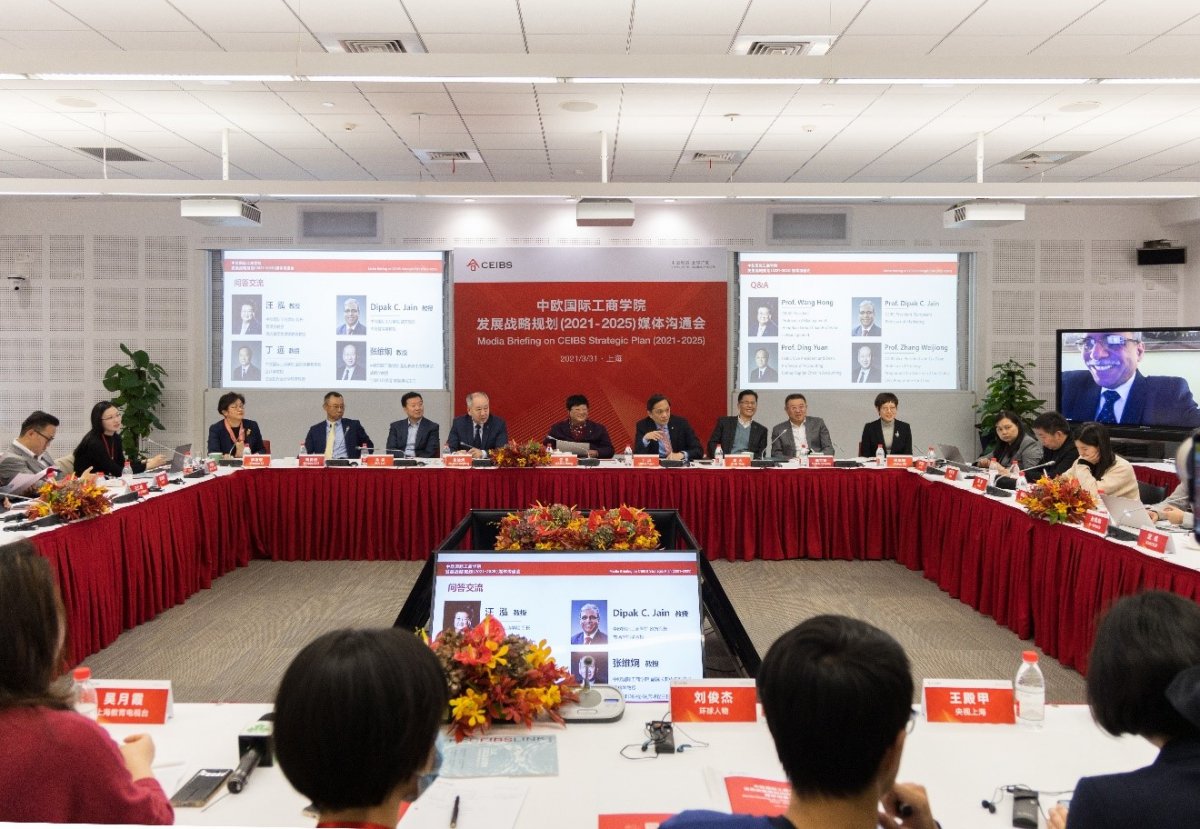 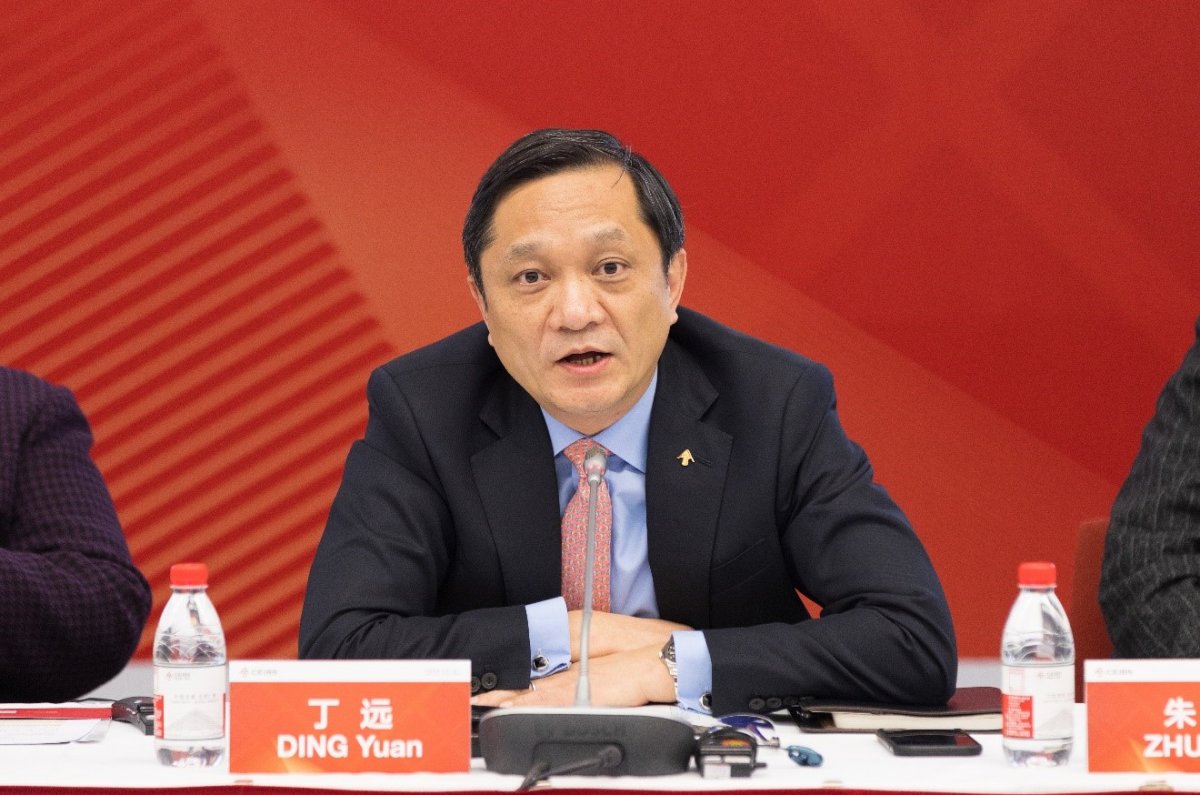 March 31, 2021. Shanghai – This year, in order to embrace emerging opportunities, CEIBS has rolled out a new strategic plan for 2021 to 2025. A subsequent media briefing event on this plan was held at CEIBS Shanghai campus today and was attended by the school’s leaders and nearly 30 leading media outlets.

Next, Prof. Wang Hong delivered a keynote speech. Prof. Wang has dedicated herself to the education field for over 30 years. These roles have given her a profound understanding of both management education and China’s overall strategy. Prof. Wang said she believes that the next five years represent an important period in CEIBS’ development.

“CEIBS’ vision is to become the most respected international business school in the world by linking China and the world in teaching, research and business practice,” she said. “And by promoting China’s social and economic development through high-impact knowledge creation and dissemination.”

Looking ahead, CEIBS will continue to keep pace with China’s social and economic development, while exemplifying co-operation between China and the EU and connecting China and the world. Building on its Hé (合) co-culture, the school will continue to uphold the motto of “Conscientiousness, Innovation and Excellence,” and follow the positioning of “China Depth, Global Breadth” to embark on a new journey.

Prof. Dipak Jain then delivered a keynote speech. During his presentation, he pointed out three key drivers for business schools: namely innovative growth, ‘beyond’ business/location and competitive advantage. He added that the top global trends in management education over the next decade will include shorter duration degree programmes, specialised degree programmes, dual/joint degree programmes, global reach and greater diversity.

He also discussed the DIET (Digital Thinking, Innovative Mindset, Entrepreneurship Spirit, Talent Development) framework. In the next five years, he said that CEIBS will strive to enhance its global presence, strengthen alumni engagement and design new programmes to spread Chinese business and management knowledge and contribute to global development.

During the media Q&A session, the four school leaders and journalists engaged in discussion on many hot topics, such as international exchange, talent training, case development, online education, and smart campuses during the pandemic. Prof. Ding Yuan said that under the current new situation, CEIBS’ teaching and research team has introduced new interdisciplinary research areas such as “China and the World,” “Management in the Digital Era,” “Service Excellence” and “CSR/Sustainability” and has contributed to global knowledge sharing through the operation of its two overseas campuses in Zurich and Accra.

At the end of the Q&A session, CEIBS leaders reaffirmed the school’s commitment to leading its own knowledge creation, to make a greater contribution to society, help drive the development of China’s economy and boost global economic co-operation.

The media briefing event was the first part of the school’s new CEIBS Friends project. The project will feature CEIBS faculty from various fields, who will share the school’s latest academic achievements and developments, such as index reports, on-going research, case development and more with various media outlets. The next event is planned for the end of this year.