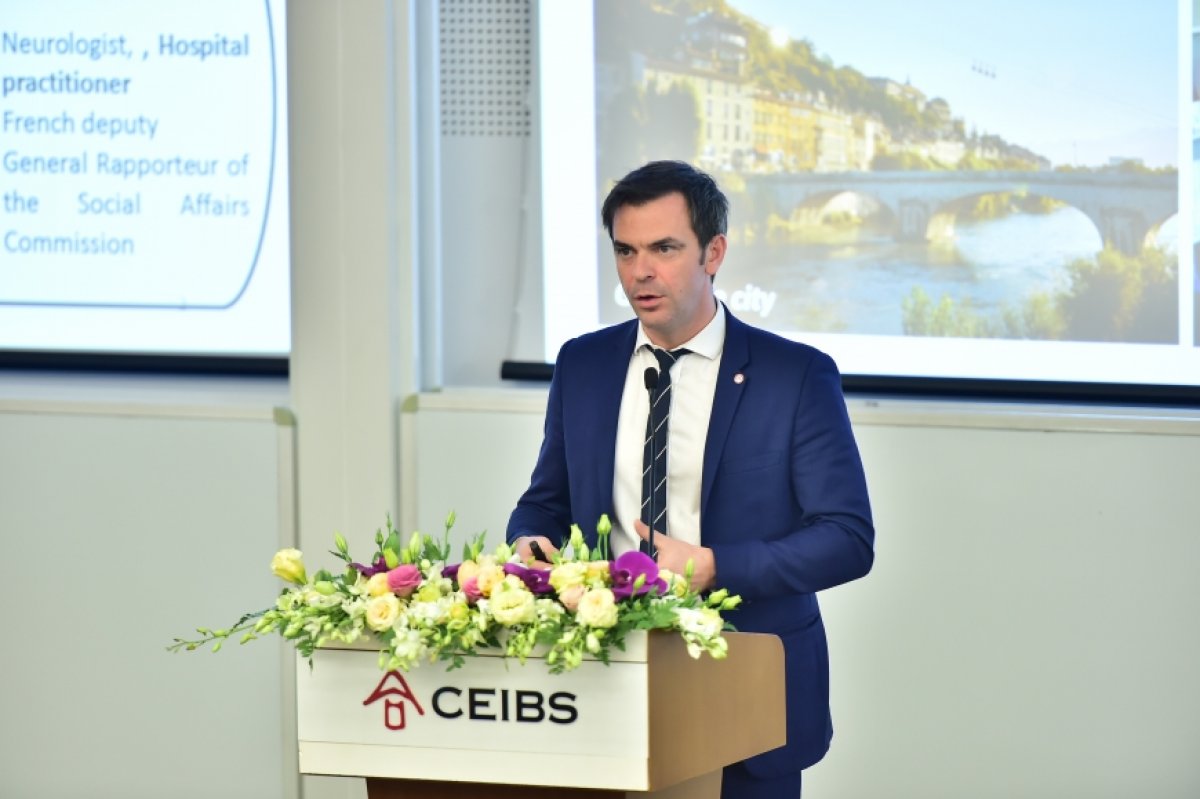 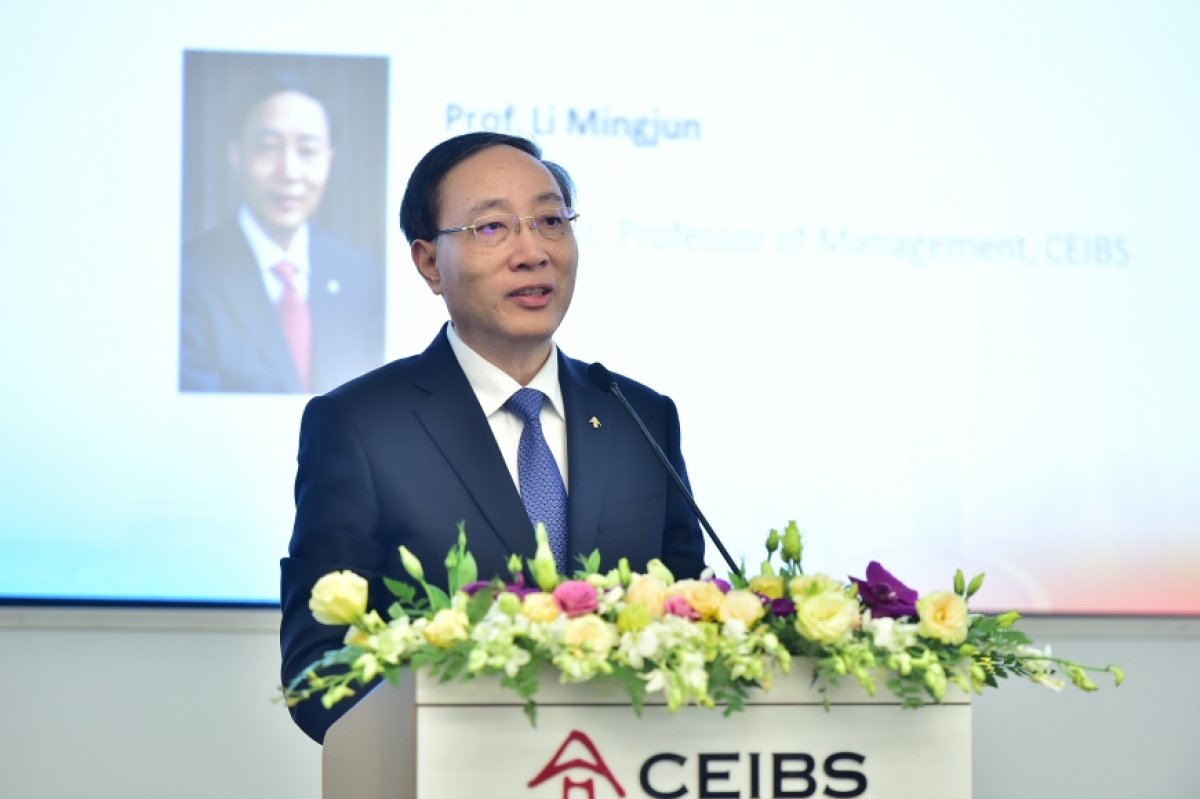 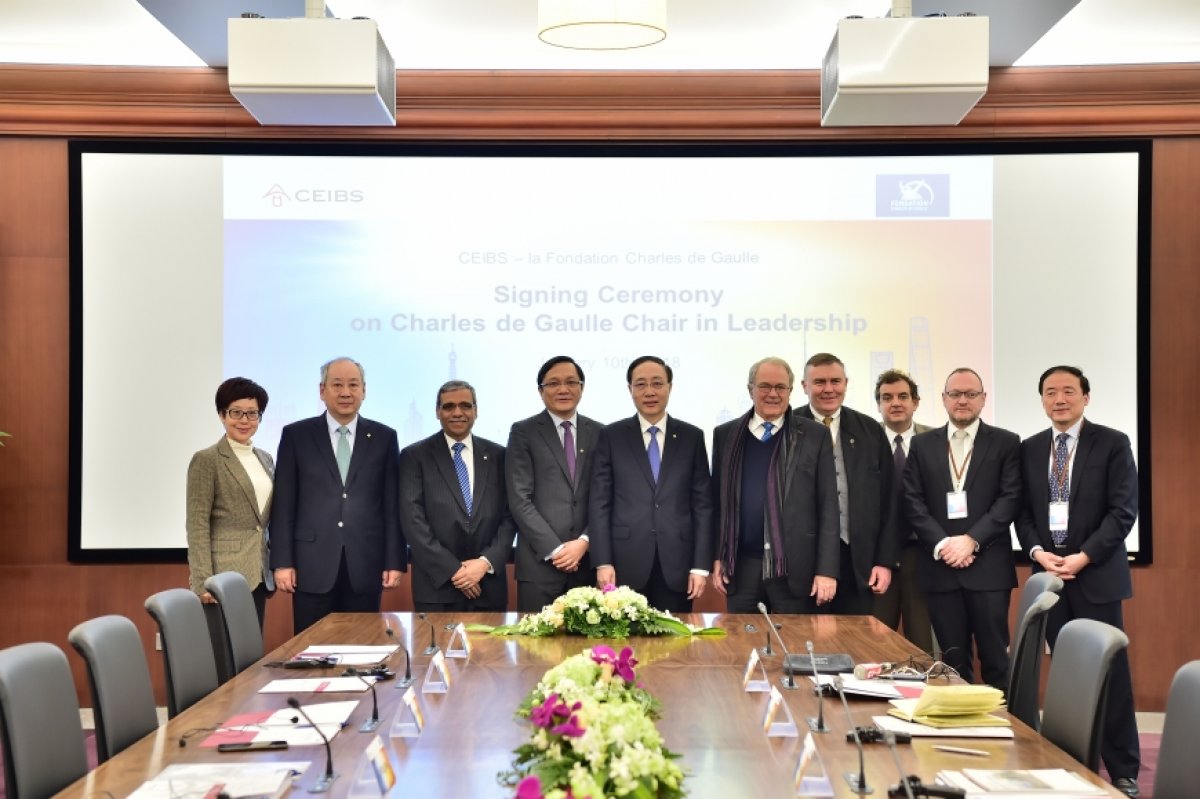 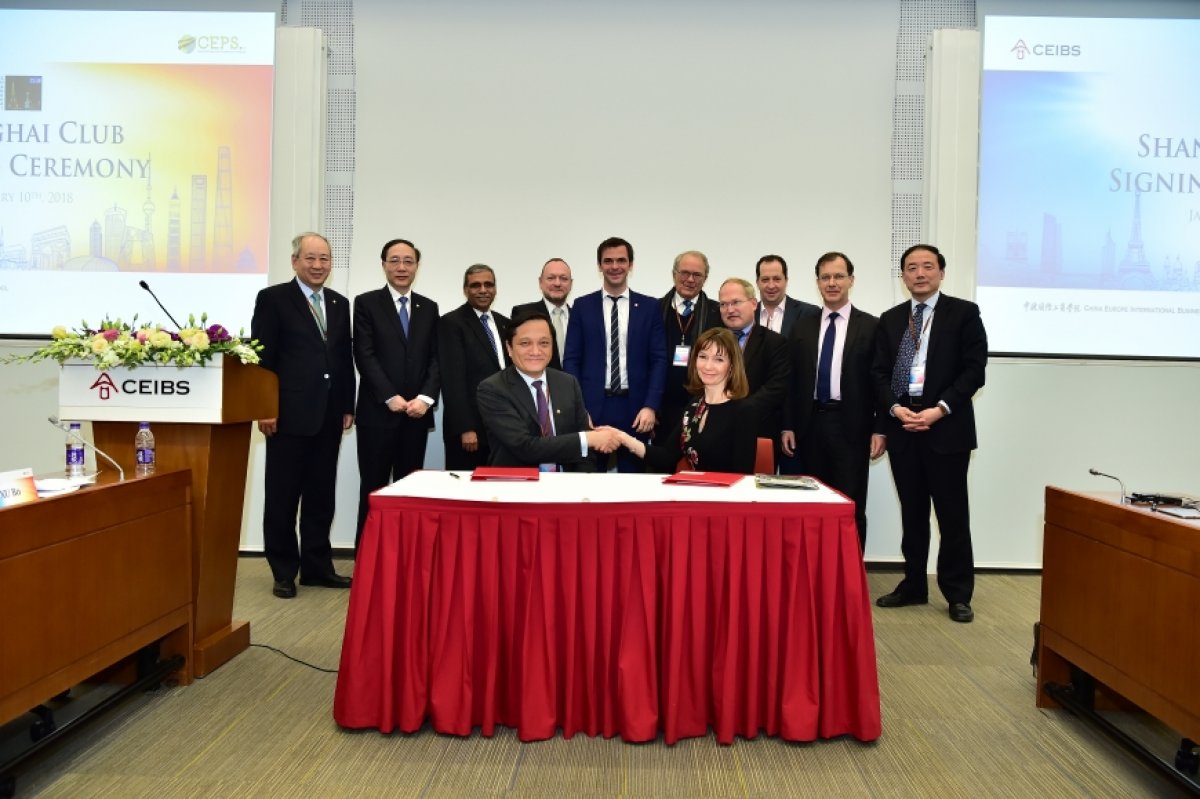 January 10, 2018. Shanghai – French Member of Parliament Olivier Veran, a member of President Emmanuel Macron’s delegation on his first official visit to China, today shared his thoughts on how artificial intelligence can transform the healthcare industry, a vital sector that he believes can provide yet another opportunity for France and China to deepen existing ties. He was speaking at a seminar on AI and Healthcare Innovation, hosted by the China Europe International Business School (CEIBS) at its Shanghai Campus.

“This industry is developing very quickly. We will enter a lot of unchartered territory. We will be able to prevent diseases from happening. We will have thousands of data sources – from nanotech, genetic tech and other forms of technology – that will be beyond the capacity of the human brain; so we need machines to help us,” said the 37-year-old neurologist and practicing doctor responsible for drafting the healthcare plan Macron used in his campaign for president. In France, the healthcare sector is the second largest user of AI, topped only by robotics.  “AI is full of vitality in France, which is taking a leading position in this area,” said Xu Bo, the day’s moderator and CEIBS Special Advisor in France.

Veran anticipates that China’s adeptness at processing big data will make it a valuable partner in the years ahead. He believes AI and big data will transform the way diagnoses are made, the way care is provided and the role of medical practitioners. “China and France can work a lot on the processing of big data. This will gradually replace traditional models of diagnosis. We will also have to rethink the role of doctors as well as the issue of ethics,” he said. He stressed that there will need to be a balance between maximising the technology available and ensuring patient’s privacy, that doctors would need to play a gatekeeper role rather than blindly follow instructions from machines, and they would still be ultimately responsible for the quality of the care they provide. He also believes technology – such as long distance diagnosis, providing hospital-quality treatment to patients in their homes, using big data to do preventative medicine, and providing useful healthcare products through the Internet of Things, will reduce the number of hospitals needed. The funds saved can be pumped into modernising and digitising existing ones, he said.

During a comprehensive look at France’s healthcare system, with data to show why it has earned high marks from the World Health Organisation, Veran also touched on the democracy of healthcare, noting that it is a challenge faced by both China and France. With mounds of information available online, he explained, access to healthcare is important to the political agenda in both countries.

During his hour-long speech, the French Member of Parliament also echoed the message delivered by his president in Beijing a day earlier – France is back! – and spoke of his country’s entrepreneurs’ willingness to work with Chinese partners. “In France there are many AI start-ups,” he said. “We have a lot of talent in digital tech, as well as in nanotech and we are doing a lot to help these talents improve their international competitiveness. We are confident they can find a lot of good partners in China, where there is a high level of efficiency, to work with and learn from them.”

An MOU and an agreement signed by CEIBS today are also expected to help boost business ties between China and France.

Earlier in the day, CEIBS signed an MOU with the Charles de Gaulle Foundation to set up the Charles de Gaulle Chair in Global Leadership at CEIBS and enter into a strategic partnership with the Foundation. The chair will be held by Former Prime Minister of France Jean-Pierre Raffarin, who is a Member of the CEIBS Board. The signing ceremony was attended by Gaetan Messin, who is Science Attaché of the French Consulate General in Shanghai and an expert in AI, as a show of the French government’s support for the collaboration. “We live in an increasingly complex international environment. China and France are playing increasingly important roles in the international arena, so the signing of this agreement is a significant event as leadership is important for both political and business leaders,” said CEIBS President Professor Li Mingjun. He also noted the Chinese admiration for Charles de Gaulle who – working with China’s Mao Zedong – was instrumental in establishing diplomatic ties between the two countries in 1964. “I believe the Charles de Gaulle Chair in Leadership at CEIBS will help our two countries play an even more important role in the international arena,” added President Li.

Foundation President Jacques Godfrain, who signed along with President Li, said the MOU and seminar were in line with de Gaulle’s values and the Foundation’s mission of knowledge sharing. “Knowledge sharing is as ancient as the human race, and great civilisations work together,” he noted. “We are pleased to work with CEIBS.”

CEIBS Vice President and Co-Dean Professor Zhang Weijiong spoke of his hope that, through further collaboration with the Foundation, and the work expected to be done via the Chair in Leadership, CEIBS can learn more about France’s business community.  “For every success story there was strong leadership behind it. Business schools today need to learn not only about US companies, but also Chinese and French ones. We also want to promote co-operation between Chinese and French entrepreneurs; so we wish to collaborate on not only an educational level but on a business level as well,” he said.

Meanwhile during the seminar at which Veran spoke, CEIBS and the Center for Prospective and Strategic Studies (CEPS), France’s longest running think tank, signed an agreement to set up the CEIBS+CEPS Shanghai Club. Its focus will be on promoting cooperation between China and France in AI, VI, Smart Health Care, Smart City, New energy, etc. CEIBS Vice President and Dean Ding Yuan sees it as an excellent platform through which to further deepen ties between China and France, as well as the business communities of both countries.

“We should do our best to attract Chinese investors to this platform, strengthen bilateral relations and work together on research and investment projects,” he said, noting for example that the sheer size of China’s population guarantees the availability of large volumes of data, which is important to the healthcare sector. “CEIBS is also a place for brainstorming on issues related to Chinese healthcare, and we can work together on topics such as how to solve long lines at hospitals while we improve the speed of diagnosis and treatment.”

The day’s events were attended by Members of the de Gaulle Foundation and the CEPS, CEIBS leaders, alumni, students and staff, along with representatives from the Chinese and French business communities.