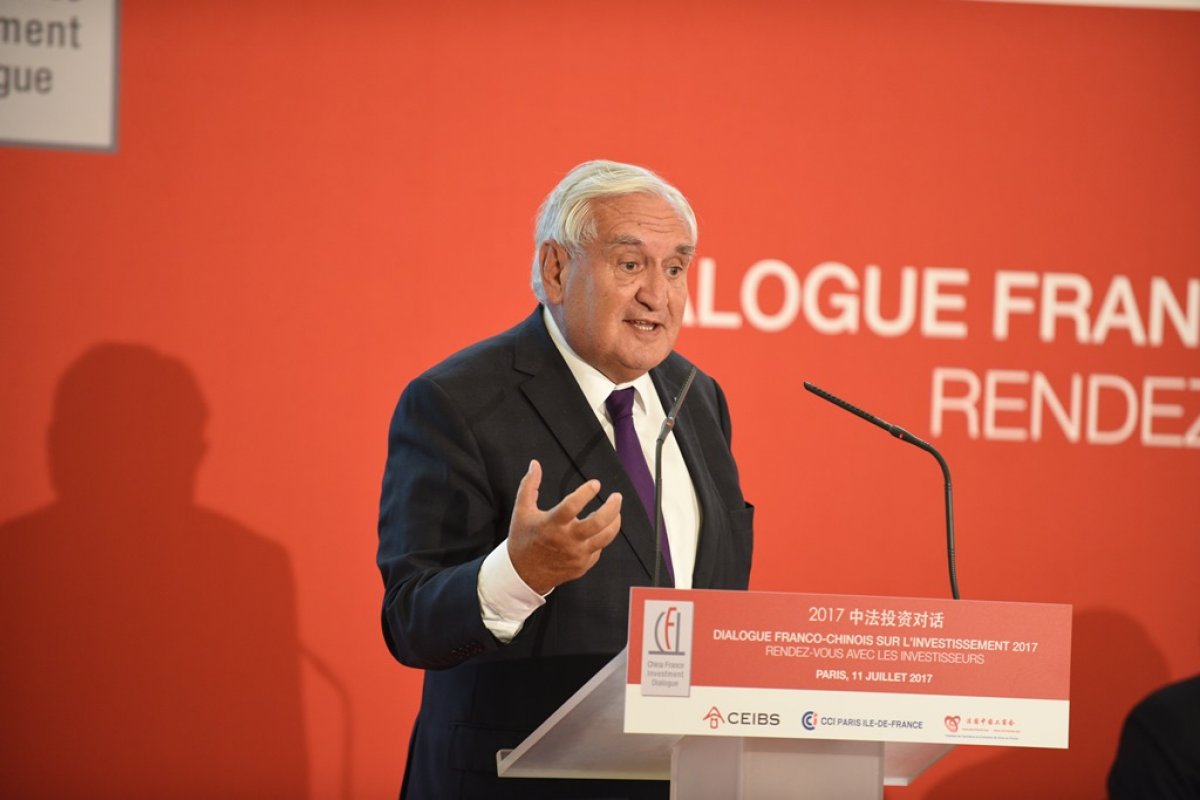 February 23, 2018. Shanghai – Former Prime Minister of France and long-time China friend Jean-Pierre Raffarin has joined China Europe International Business School (CEIBS) as Distinguished Professor. His appointment as a member of faculty at China’s leading international business school was announced today, and follows his appointment to the CEIBS Board in November 2015.

In his role as Distinguished Professor at CEIBS, Raffarin – who currently lectures on leadership at ESCP Europe – will play a significant role in CEIBS’ efforts to educate socially responsible business leaders of today and tomorrow. In addition, he will hold the Charles De Gaulle Chair in Global Leadership at CEIBS, after the finalisation of a strategic partnership between CEIBS and the Charles de Gaulle Foundation, for which an MOU was signed at the CEIBS Shanghai Campus on January 10.

“It is an honour for me to join the CEIBS faculty and I look forward to the fruitful discussions I will have in and outside of the classroom,” said Raffarin. “China, and its people, has always been close to my heart – as has France and my compatriots – and this is an excellent opportunity for me to do my part in fostering ties between both sides. What better way to build a stronger China-France relationship than to engage in intellectual discourse.”

In addition to his role as a statesman, Raffarin, whom the Chinese fondly call lao pengyou (old friend), is also well known for his China expertise. It came as no surprise that he was tapped, by French President Emmanuel Macron, to represent France at the strategically important Summit on the Belt & Road Initiative hosted by Beijing in May 2017. In early 2018 he was appointed by President Emmanuel Macron as Special Representative of the French Government for China.

“Mr. Raffarin will participate in high-quality and high-level activities during his visits to CEIBS,” said Vice President & Dean Professor Ding Yuan. “His presentations, lectures, and intellectual engagement with our faculty, students and alumni will help further ties between China and Europe.” Raffarin’s appointment is especially timely as CEIBS boosts its role as a platform for exchange and collaboration between China and Europe in 2018, the 15th anniversary of Sino-European ties.

Raffarin’s first visit to CEIBS in his new role will be in July.

About Jean-Pierre Raffarin
Mr. Jean-Pierre Raffarin served as Prime Minister of France (2002 to 2005), Vice President (2011 to 2014), and Chairman of The Defence and Foreign Affairs Committee (2014 to 2017). A long-time statesman, he has also held prominent positions as President of the Region Poitou-Charentes, Member of the European Parliament, and French Minister of Small and Medium Enterprises, Commerce and Craft. He led reforms in various areas such as pensions, decentralisation and health insurance.

In 2009, French President Nicolas Sarkozy appointed him President of the Republic’s Personal Representative for Francophony. He is currently the Special Representative of the French Government for China.  Active on the international stage he has made several visits to China. He is also Chairman of the annual French Chinese seminar of the Comité France Chine and of two Foundations, Prospective et l’Innovation and Leaders Poe Peace.

CEIBS has 20,000+ alumni from more than 80 countries worldwide, and has provided a broad range of management programmes for more than 130,000 executives both at home and abroad. CEIBS’ faculty team is uniquely equipped to deliver a combination of China Depth and Global Breadth in both teaching and research. CEIBS has campuses in Shanghai, Beijing, Shenzhen Zurich and Accra.