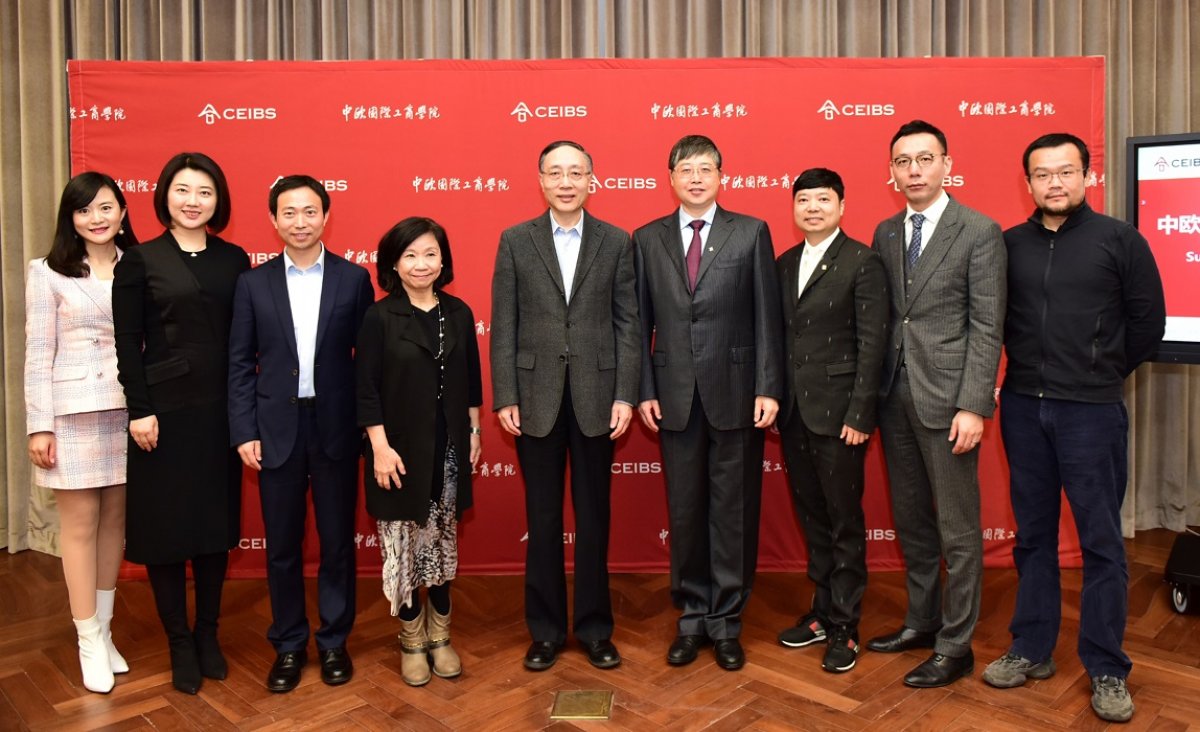 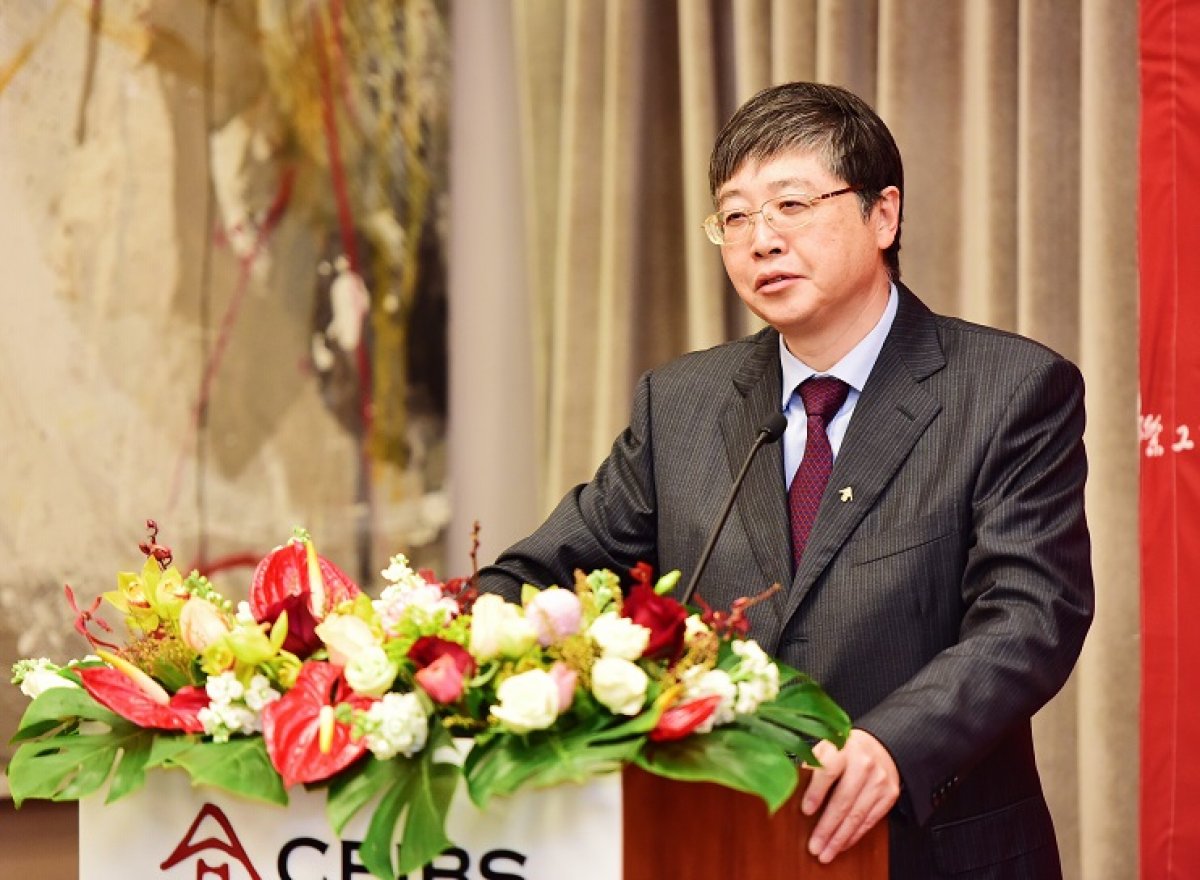 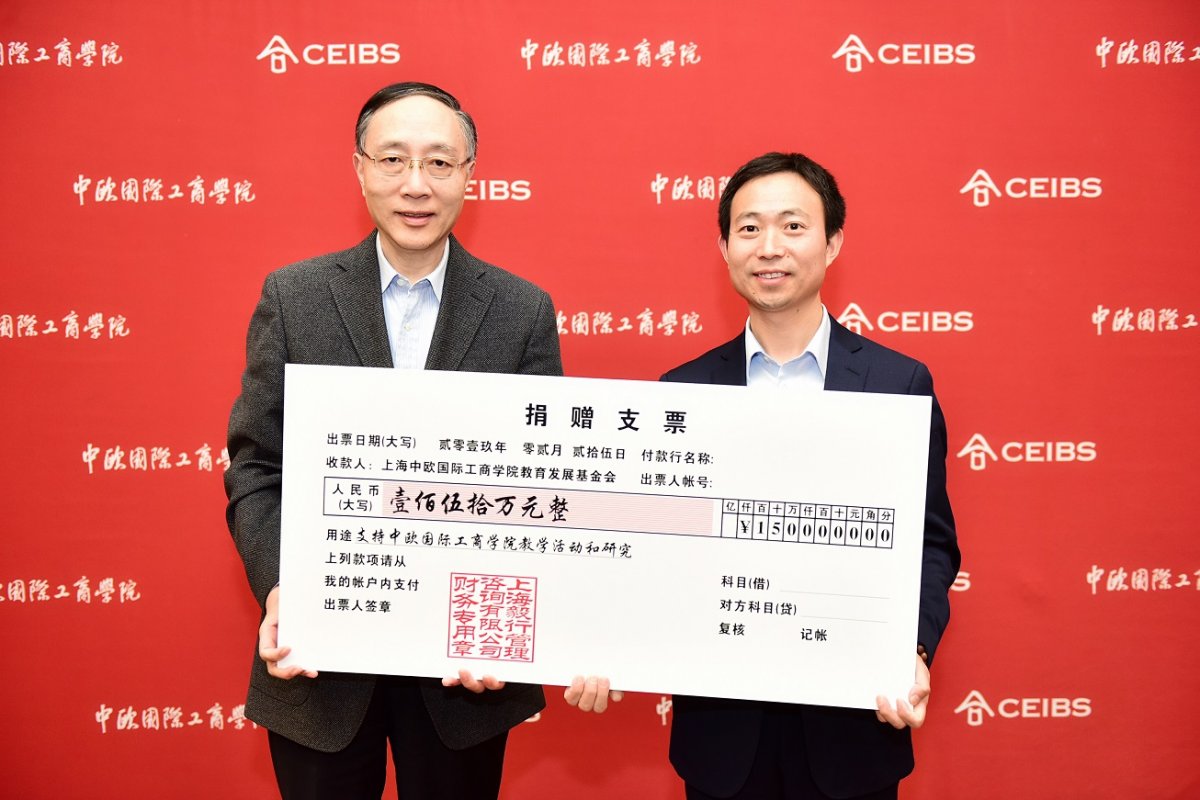 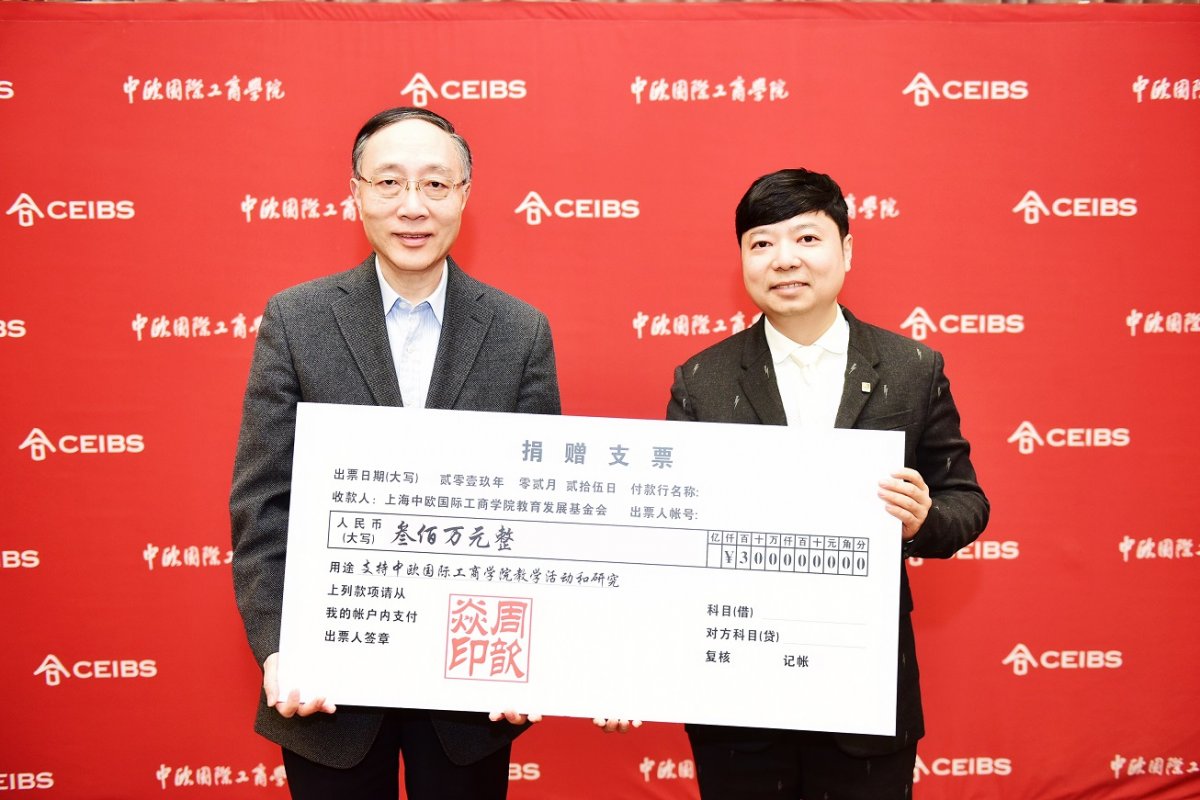 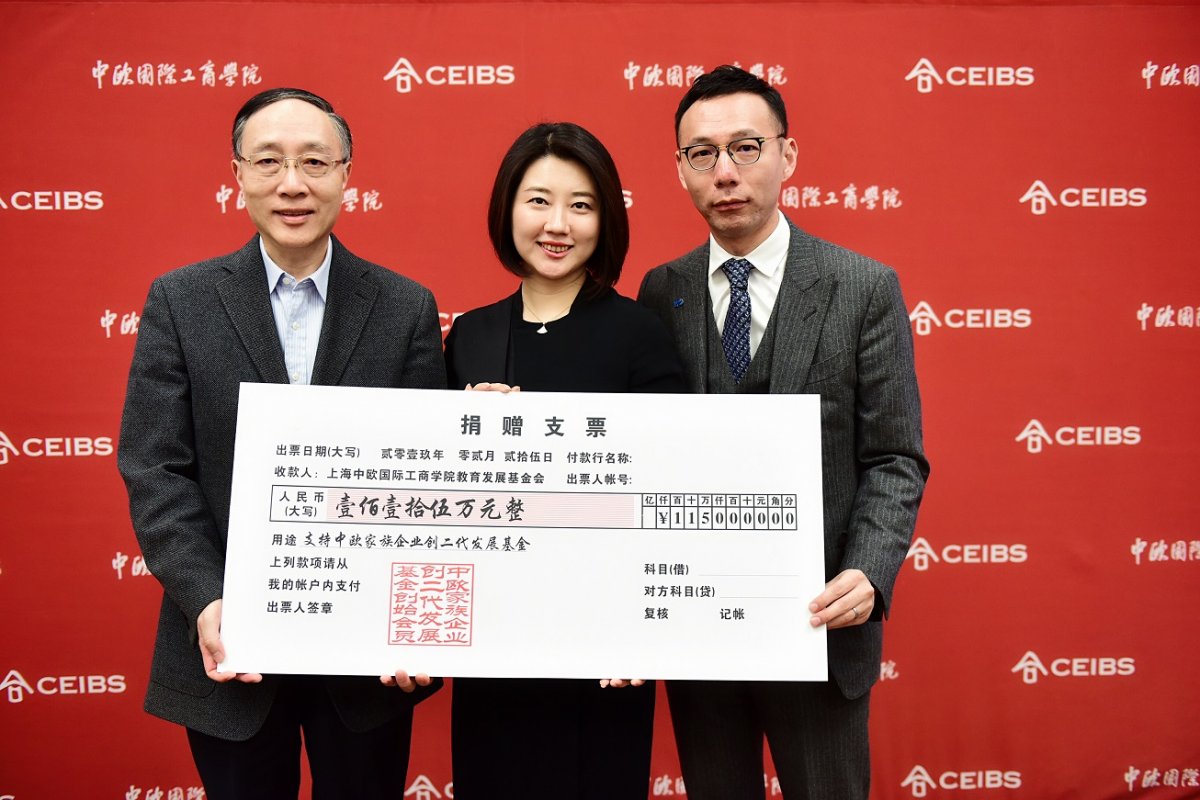 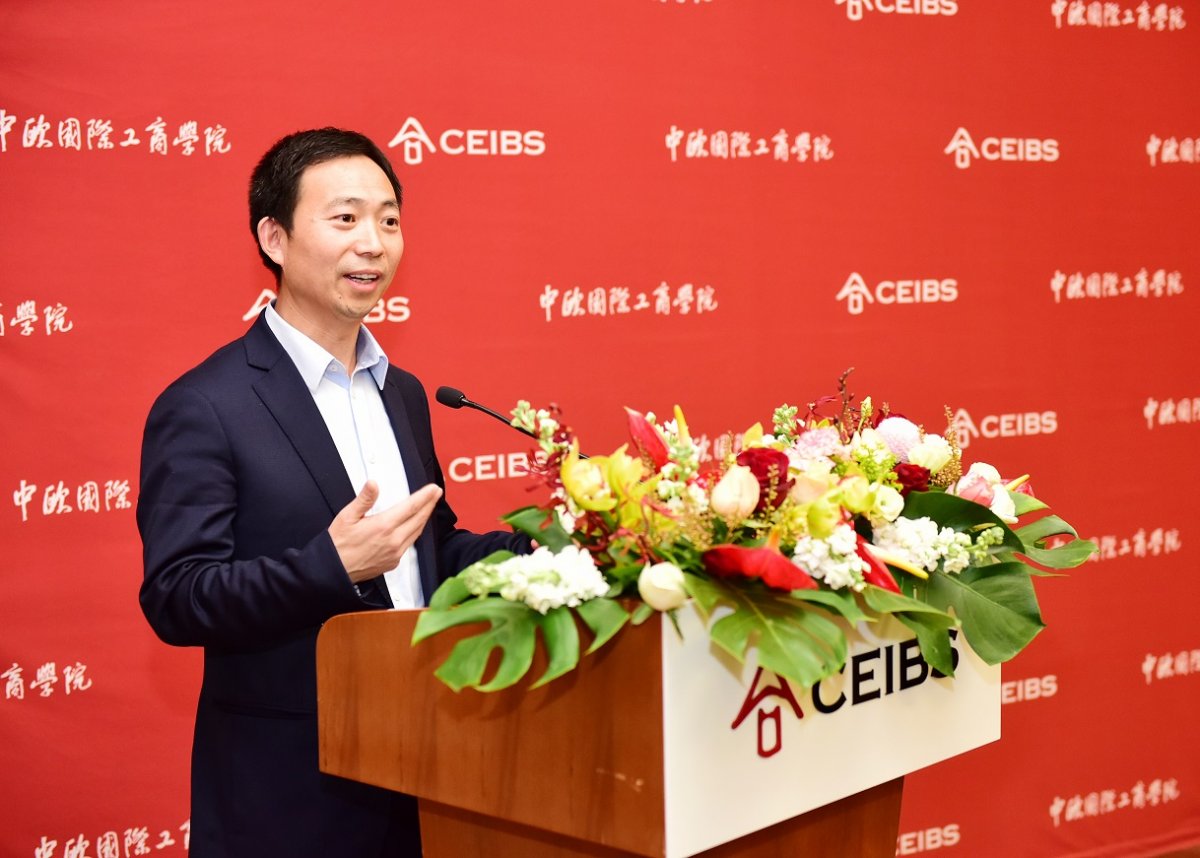 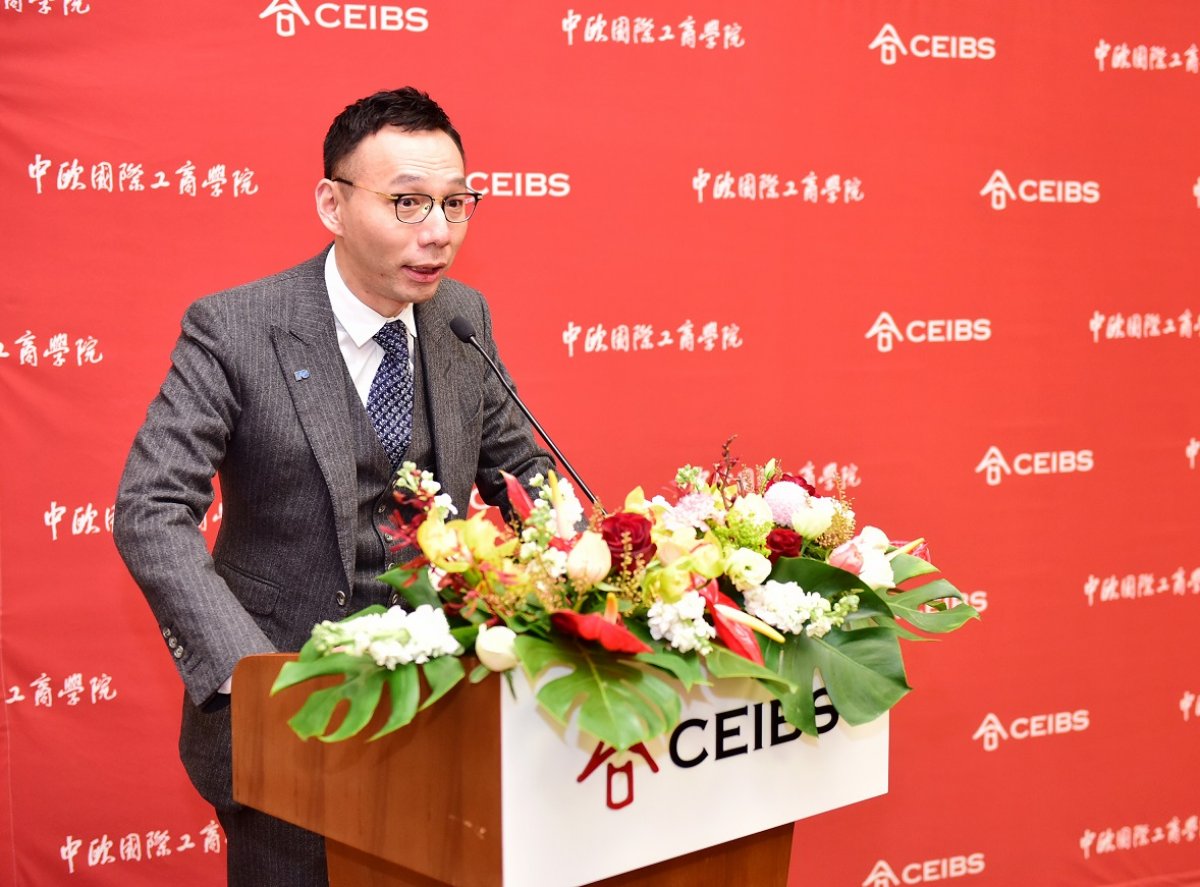 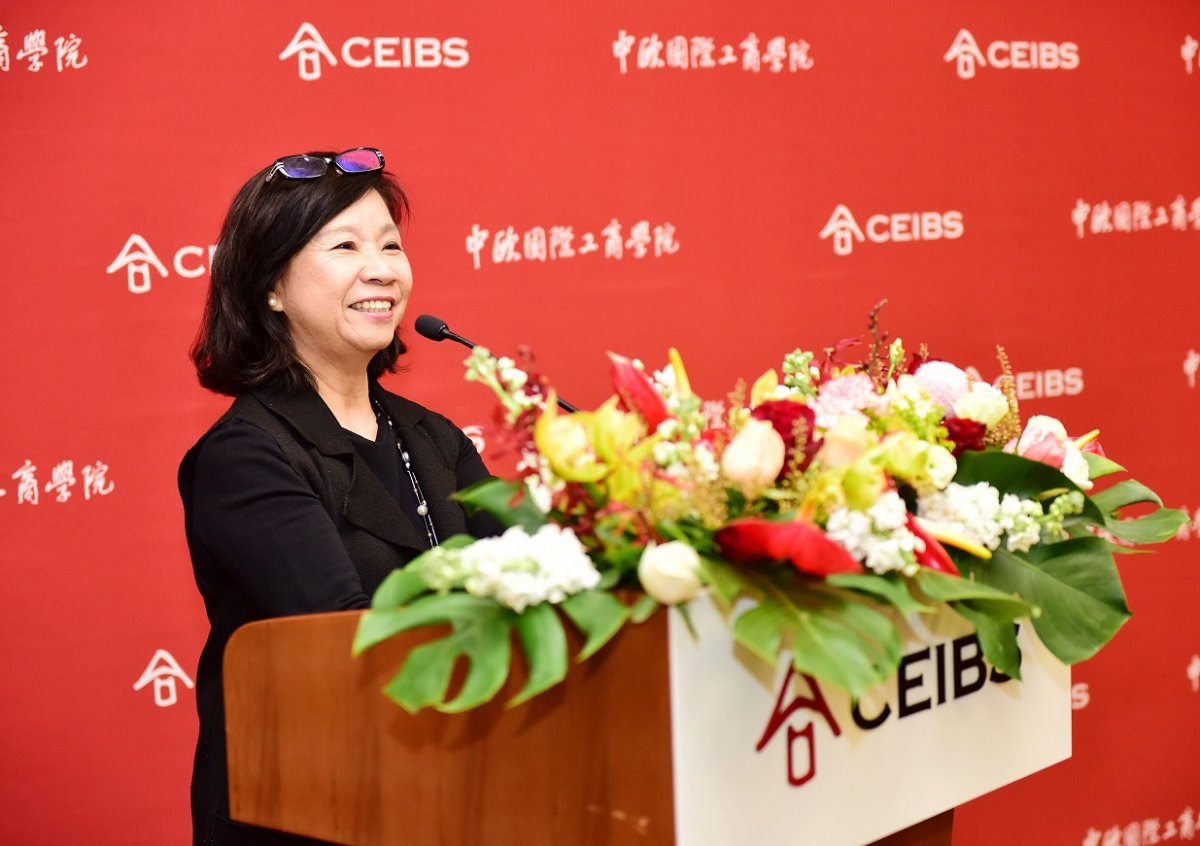 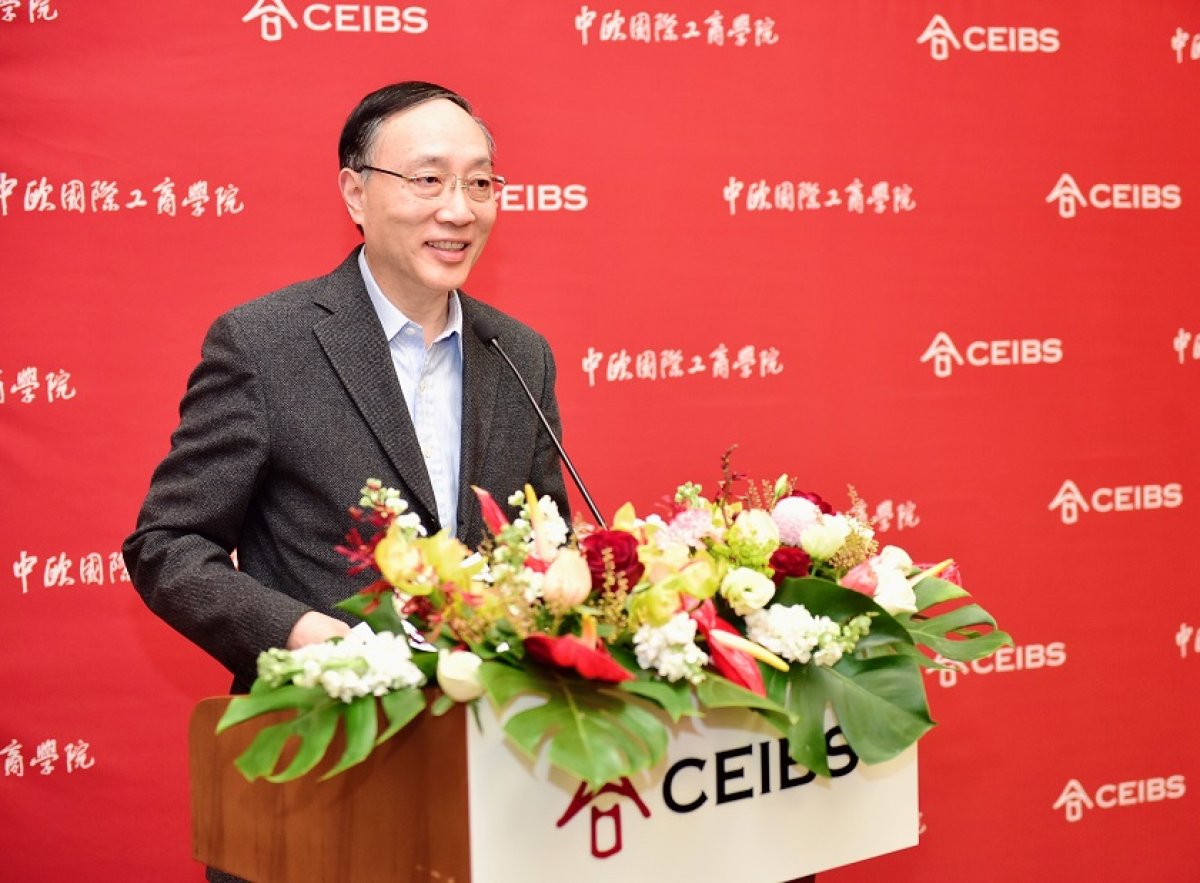 February 25, 2019. Shanghai —A formal donation ceremony for the CEIBS Center for Family Heritage was held at CEIBS Shanghai Campus today. As a gesture of thanks to the school, Chongqing DUCAR Chairman Mr. Zhou Xinyan (EMBA 2015) and Shanghai Yixing Management Consulting Co., Ltd. founder and CEO Mr. Jin Guangxue (EMBA 2011), along with 16 other members of CEIBS Family Business Second Generation Private Board, donated 5.65 million RMB to the CEIBS Center for Family Heritage to help facilitate the transition of Chinese family businesses during critical periods of innovation and transformation.

On behalf of CEIBS faculty, Professor Xu Bin opened the ceremony by thanking the alumni members for supporting the school’s teaching and research. During his speech, he stated that, in addition to possessing first-class talent and facilities, spiritual inheritance is of great valuable to CEIBS. As a young business school established only 25 years ago, CEIBS has received strong support from many alumni at both spiritual and material levels. He also said that he hopes the love shown by CEIBS alumni would serve as an example for future generations.

Professor Li Mingjun accepted the donation on behalf of the CEIBS Education Development Foundation and presented a donation certificate to alumni Zhou Xinyan, Jin Guangxue, Lin Jiaxu, and Zhu Naifeng. Zhou donated 3 million RMB in the name of the Hengfang Special Support Plan, while Jin donated 1.5 million RMB on behalf of Shanghai Yixing Management Consulting. Lin, Zhu, and the other members of the CEIBS Family Business Second Generation Private Board also launched a second-generation development fund, to which they donated 1.15 million RMB.

In speaking at the ceremony, Zhou Xinyan said that the decision to enrol at CEIBS was the most important decision in his life. He stated further that the rapid growth DUCAR has achieved in the past five years is inseparable from the knowledge he has received from CEIBS professors and the exchanges he has had with other CEIBS students. He also called on all alumni to keep in mind the teachings they have received at CEIBS and to contribute in their own way to social development.

Jin Guangxue said that his experience at CEIBS has allowed him to realise the transformation of his life. In addition to imparting business knowledge, he said, CEIBS professors have also supplied him with guidance in many other ways. Enthusiasm for activities such as the annual Gobi Desert Challenge have helped him reshape himself and helped pave the road to entrepreneurship. Finally, he said that he hopes his company’s donation can help express his intentions at CEIBS.

On behalf of the CEIBS Family Business Second Generation Private Board, Zhu Naifeng pointed out that, since the beginning of China's reform and opening up, many private enterprises have faced critical moments related to family succession. As opposed to other kinds of enterprises, he said, the primary challenge facing family businesses is how to deal with the subtle relationship between “love, reason, and law.” The Second Generation Private Board will bring together CEIBS family businesses to help them solve common problems. Finally, he said that the 16 students who together launched the second-generation development fund for the establishment of a CEIBS family business have done so as a thank you to their teachers and called on more alumni to join the initiative.
Professor Li Xiujuan explained that intergenerational inheritance can have a big impact on Chinese family businesses and that CEIBS has the ability to have a far-reaching impact in this field. She pointed out that, in pursuing any career or dream, we cannot do so without the power of love. Furthermore, she expressed CEIBS’ sincere thanks to the alumni for their love and support for the Center for Family Heritage.

Six years ago, CEIBS Center for Family Heritage was established to help Chinese family businesses to carry out intergenerational succession in the process of transformation and innovation. Professor Li Xiujuan served as co-director. Since its establishment, the centre has held six family inheritance forums, and its influence increases daily. In addition, more family businesses have gained understanding, warmth, and help with the process of communication from the CEIBS Family Business Second Generation Private Board.

Finally, Professor Li Mingjun expressed his gratitude to the alumni on behalf of the CEIBS. He mentioned that, as a young business school, the vitality of CEIBS lies in continuous innovation, and that the speed and quality of knowledge innovation are key to its success in today's competitive business school environment. CEIBS Center for Family Heritage started early and both the depth and breadth of research are at the forefront of the field. The role of family businesses in the Chinese economy is increasingly prominent. The research conducted by the CEIBS Center for Family Heritage in this field will point the way for more family businesses to complete successful handovers in a fast-changing era. President Li also recalled that, since joining CEIBS in 2015, he has been deeply touched by alumni members’ friendship and love for the school. CEIBS is a special platform that brings together a lot of wisdom and resources, and one which constantly promotes the progress of the school and its alumni. At the same time, he said, everyone's trust and love serves as an inexhaustible driving force in continuing its development. This year marks the 25th anniversary of the founding of CEIBS. With the joint effort of the school and alumni, we have achieved many great things. CEIBS is also looking forward to working with alumni in the next 25 years to enhance the development of the school and the careers of CEIBS alumni.

About CEIBS Center for Family Heritage

As part of China Europe International Business School, the CEIBS Center for Family Heritage cooperates with thousands of alumni on academic research and the development of educational resources. The centre also works with overseas family businesses and academic institutions. It serves as a platform for entrepreneurship and wealth creation, dissemination, and hosting discussions.