“I heard you’re an actor!” my new classmates often said to me at the start of school. I would chuckle and brush it off.

“Yes, I did some acting in Chicago. Nothing big, just some theatre shows and commercials here and there.” I usually downplayed these things because in truth I never reached the level of “actor” that I dreamed of: to star in TV shows and movies. Sometimes I would elaborate, “I had an agent and auditioned for some TV shows, but never got the role.”

Two and a half years after graduating from college, I was simultaneously working full-time and acting. I had taken many acting classes in Chicago and had gotten an agent through a showcase. But it soon became clear to me that balancing the two sides was unsustainable. I was frequently being called to auditions in the middle of the workday, meaning I had to schedule meetings around my auditions last-minute and make up for lost time at work by working later into the evenings. Every time I booked a commercial, I would also have to take a full day off. Once, on the day of a commercial shoot, I discovered that the set location was the very office building I worked in! Waiting in the lobby, I hoped I wouldn’t bump into any of my colleagues. 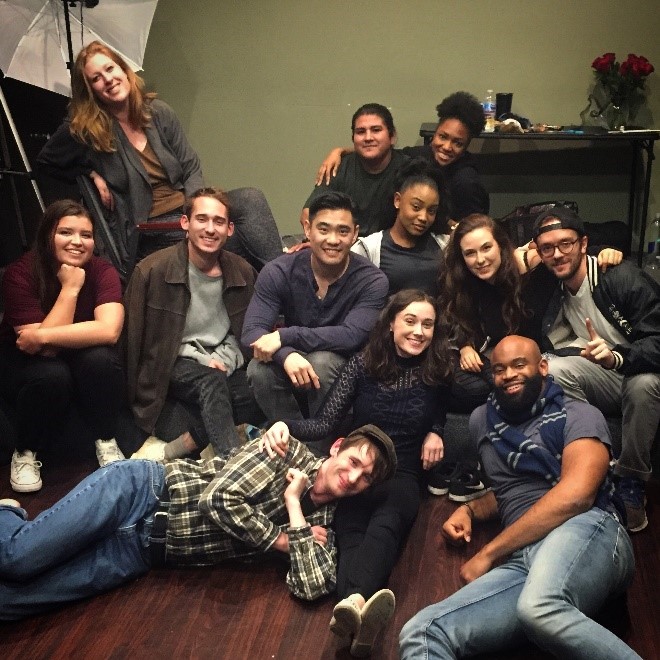 In 2019, I quit my full-time job to dedicate more time to acting. That summer, I enrolled in a five-month conservatory acting program in Chicago (The Black Box ACADEMY). It was simultaneously the most grueling and most rewarding experience of my life. I would be in classes three hours every night, then I’d spend the next day doing “homework” (i.e. preparing for scenes, memorizing lines, doing emotional work for my character, etc.) and balancing a part-time job. “Blood, sweat, and tears” would be putting the program lightly. Thanks to Black Box, I grew tremendously as an actor, and I felt momentum building in my acting career. I booked an ensemble role in a play at a storefront theatre, followed by two understudy roles—one of which was at the critically acclaimed Steep Theatre. But two weeks into rehearsals for Steep’s show, the pandemic hit Chicago and lockdowns began. 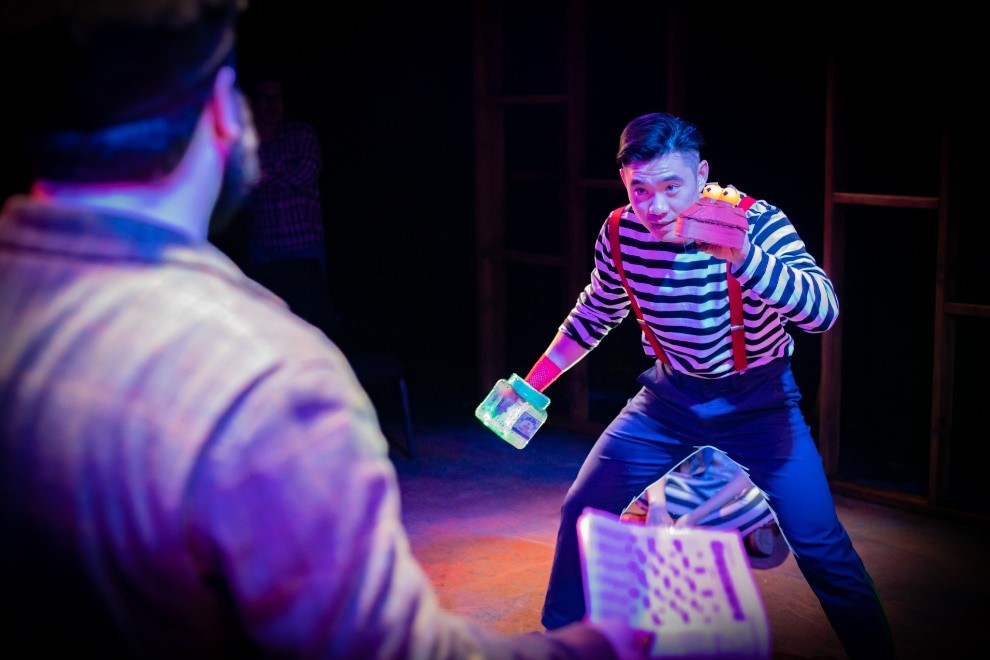 On the set of “Hershel and the Hannukah Goblins”, my first professional Chicago play at the Strawdog Theatre 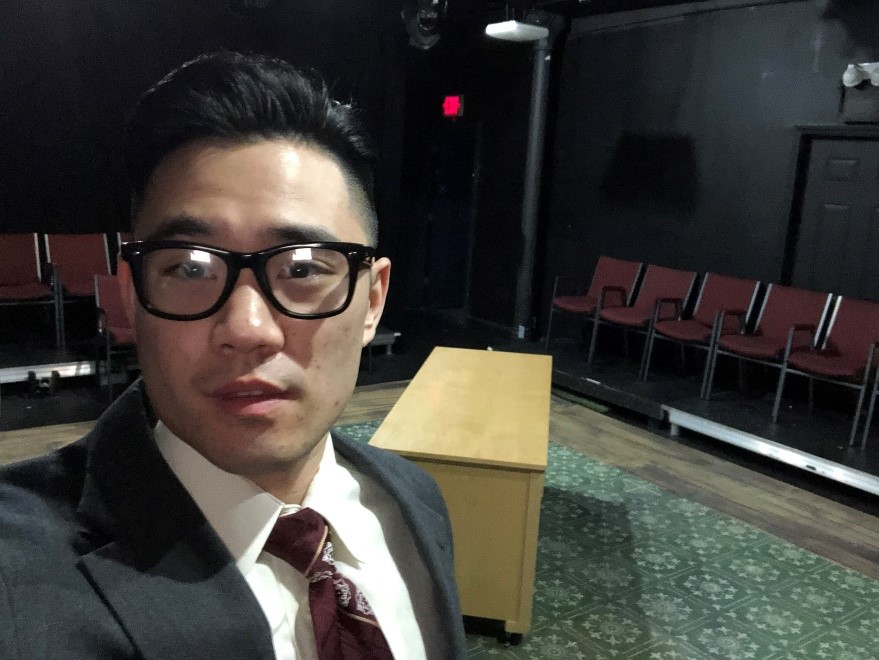 Prepping for the understudy performance of “Labyrinth” at Broken Nose Theatre

A Tale of Two Pandemics

What followed was a slow, disheartening, frustrating period of eight months where the theatre world prayed and prayed for the pandemic to lift, for rehearsals and shows to resume. Plays were postponed then cancelled, auditions were moved to either Zoom or self-tapes, and online “readings” became the norm. When it was clear that lockdowns in the US weren’t going to end anytime soon, I decided to spend some time with family and flew to Shanghai in late November 2020, telling my agent that I would return in January next year. Little did I know that this short trip would lead to an extended stay of several months, an application and acceptance to CEIBS, and a decision to move here permanently.

When I got out of my initial quarantine in Shanghai near the end of 2020, I was blown away by how normal life was here. The pandemic was essentially non-existent in China—subways were packed for work commuters, and restaurants and bars were teeming with life. The first weekend, I stepped into an overcrowded club and could hardly believe it! In Chicago, I had been living by myself, with social life limited to Zoom hangouts or the occasional gathering of two to five people. I began to reconnect with old friends from high school and discovered a huge, welcoming international community. It seemed like every week I was meeting new people from different backgrounds, whether they went to international schools and studied abroad, or were coming in from the UK, Hong Kong, Australia, or Europe. Opportunity seemed everywhere—my friends were working at exciting companies, starting their own businesses, and collaborating with each other on projects. Not to mention the social scene was also unbeatable; regardless of your interests, there always seemed to be something happening in town.

Wait, I thought there was a pandemic?(photo taken in March 2021) 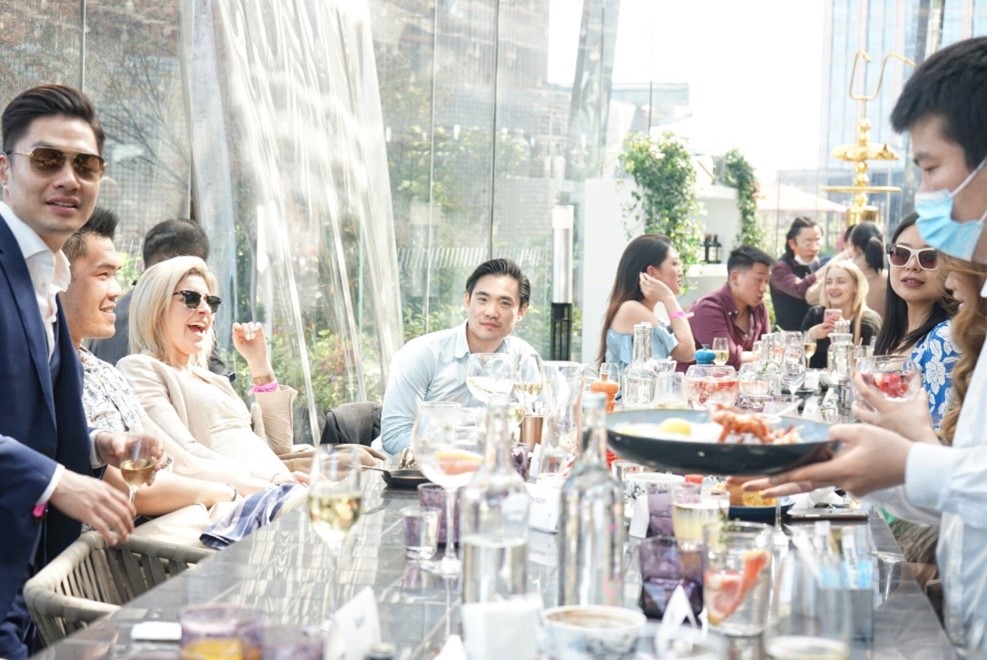 But as the months passed in Shanghai, I realized I had to decide on my future. As hard as it was to face, my acting career was at a standstill thanks to the pandemic, which continued to persist in the US. Once so focused on chasing my dream, I now feared that all my momentum had dissipated and that it was too late for me to start from scratch again. At the same time, I had become enthralled by Shanghai and often wondered what a future here would look like. Eventually, I came to a compromise: why not combine my passion for acting with my economics background and work experience? Perhaps I could pursue an MBA in China and position myself as a business executive, maybe a producer, in the entertainment industry here. It would be a whole new adventure with tons of growth opportunities. Going to CEIBS seemed the perfect way to accomplish this goal while moving back to the city I had a newfound love for. So with that, I applied and was accepted.

The Start of a New Journey

My passion for acting stemmed from a simple yet often overlooked truth: that actors are healers. By playing characters that audiences can relate to, we help others reflect on their own lives and the world around them. Whether it is simply by entertaining or by teaching a valuable life lesson, the goal is the same: to move people, to make them laugh and cry, and in so doing, bring people closer together. Today, the world is in much need for healing—COVID filling hospitals, economies struggling to recover, continuing issues with climate change, and growing divides between groups and peoples.

At CEIBS, I’ve come to realize that there are so many ways to unite people beyond performing in a play. As President of the International Club, I’ve had the honour of hosting several events that celebrate the diverse cultures on campus and to foster cross-cultural sharing. We held a Thanksgiving dinner where the entire class came to enjoy a sumptuous turkey feast in the pleasant company of friends after a hard week of coursework. We put on a Chinese New Year Gala that showcased the numerous talents of our classmates and had a post-show banquet filled with dumpling making, fun prizes, and raucous KTV. Furthermore, through the various courses and programs at CEIBS, I am becoming a more well-rounded person and leader, one who will be equipped to make a bigger impact on the world.

On registration day, I still wondered whether my decision was the right one. But over time, I’ve found that I am exactly in the right place at the right time thanks to the support network I’ve built here. The international community in Shanghai is always one that I can turn to for help, whether that means trading shared experiences over dinner or discussing ways to utilize our unique backgrounds to bridge the gap between East and West. I have a CEIBS mentor in the media and entertainment space who has provided helpful insights about the industry and how I can play a part. And, most importantly, I have found myself surrounded by bright, fun, passionate classmates all forging new paths of their own. Many of them are like me, seeking a career change; they, too, are looking to a new future, one they may have never envisioned before. The friends that I’m making at CEIBS will be dear to me for the rest of my life, and I know that with their support, I will be able to chase a new dream—being on the business side of the shows and movies that have the power to heal.