The Real-Situation Learning Method (RSLM) is one of the key features of the CEIBS’ Global EMBA programme. RSLM enables Global EMBA students and alumni to expand their business knowledge through real-world scenarios that demonstrate the reality of local and global market conditions.

CEIBS is constantly searching for opportunities to approach leading companies who are actively changing with the market, as they present relevant real-world examples ranging from digital transformation and technology implementation to tectonic shifts in M&A and strategic transformation. This gives participants the chance not only to accumulate business knowledge, but also to interact with prominent business leaders to foster new business knowledge as a group.

The combination on-site company visits that allow students to closely examine how leading companies successfully navigate the age of disruption we currently live in and directly interface with business leaders and case study analysis makes RSLM a highly effective and comprehensive method for bringing business strategy to life in a way that purely theoretical debate cannot. 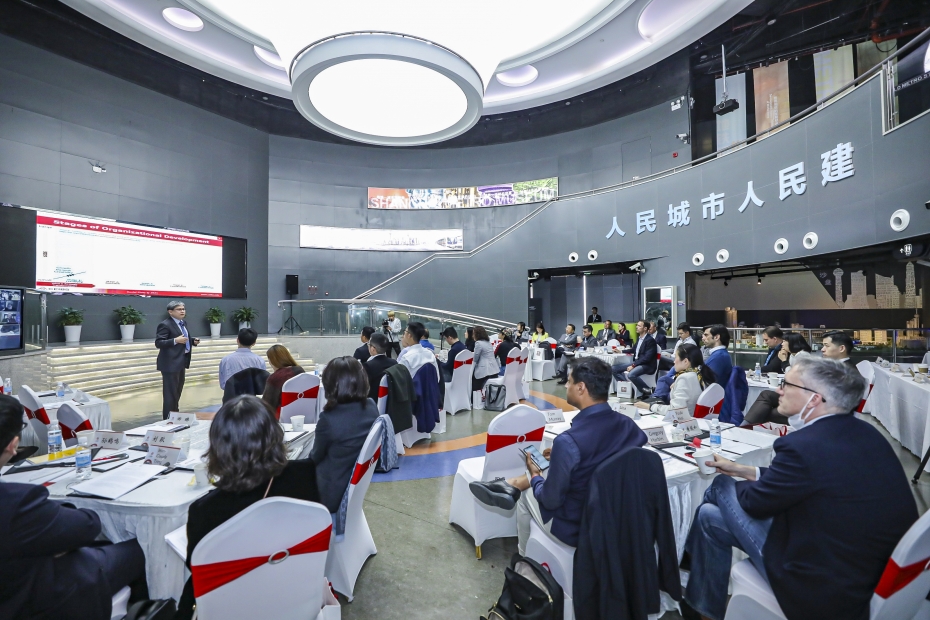 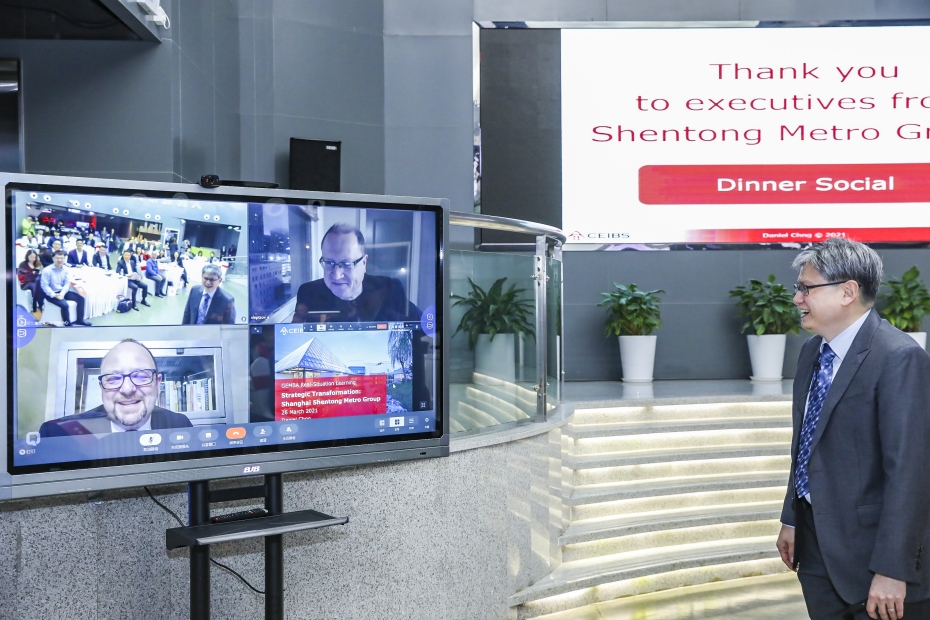 Next, Prof. Chng presented analysis based on his case study, “Shanghai Shentong Metro Group:  Strategic Transformation through Transit-oriented Development.” The case study was developed in collaboration with CEIBS Senior Case Researcher Zhao Liman, and Professors John Clarke and Alexander Sleptsov of the A B Freeman School of Business at Tulane University. The case study is the world’s first of its kind on TOD strategy transformation in the rail transit industry. It outlines exactly why, and how, SMG adopted TOD to realise three major reformations: namely, switching from the rapid growth of construction and operation to high-quality development; building a synthesised urban metro service network rather than providing a single transportation function; and shifting operation goals from daily operations to strategic transformation.

At the beginning of the on-site visit, Global EMBA students learned how Shanghai Metro grew from a single line opened in 1993 into the world’s largest city metro network with 15 lines spread over 770km and 459 stations. Highlights of the tour included a mock-up of an engineering tunnel and a fully functioning training simulator where members of the group tried their hand at guiding a metro train successfully into a station (something which is significantly harder than it looks)! 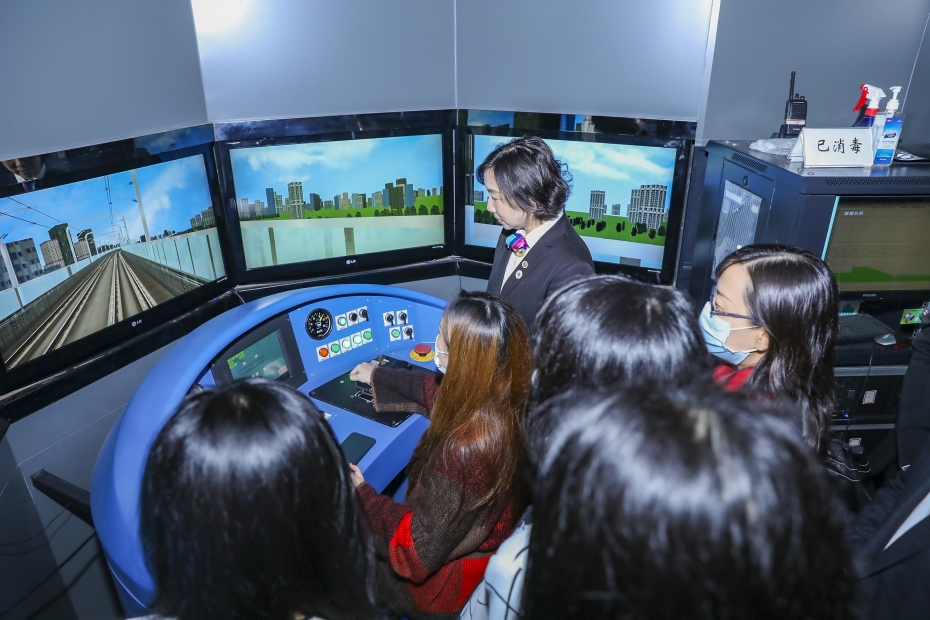 Afterwards, the group was introduced to the key features of the MIXC TOD projects, including the 140,000sqm of dedicated office space which serves as home to 120 different companies and 10 national headquarters; the attached expansive ‘stacked’ car parking areas capable of storing thousands of vehicles; and the first China location of CitizenM, a multinational business hotel brand.

During the tour, the group were able to see first-hand how some of the more complex technical landscaping elements were incorporated by SMG to make the project a reality. This gave them a better understanding of the physical challenges involved in creating a viable TOD “cover” the metro infrastructure, and how essential it was to overcome these challenges to maximise the convenience and aesthetic appeal of the development as a whole. Furthermore, they were able to see how MIXC became a model for SMG’s successful TOD project development approach. Having successfully delivered three TOD projects to date, SMG has a further eight planned at various locations across Shanghai for completion before the end of 2025. 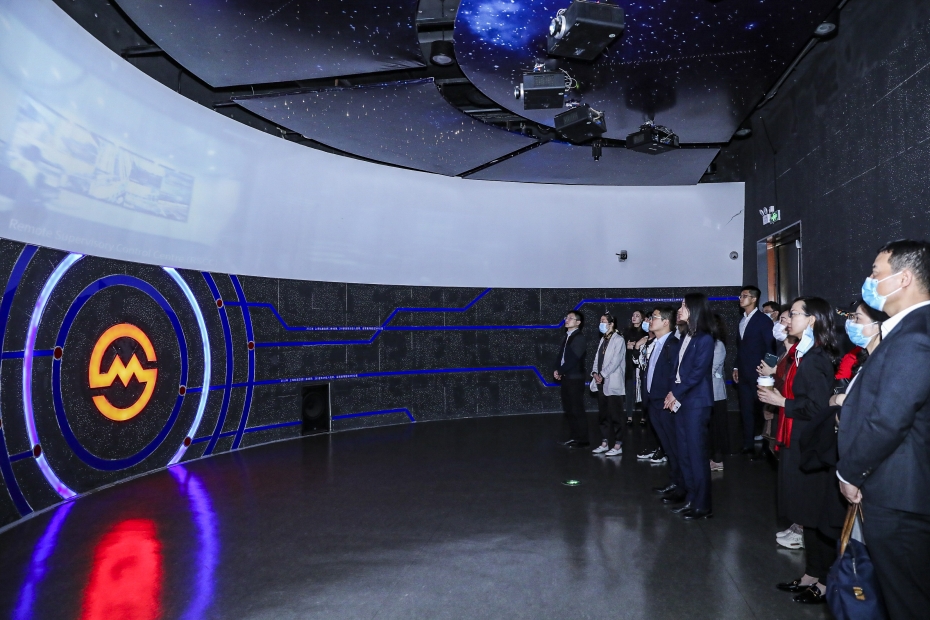 SMG’s primary mission is rather visionary. However, as all major enterprises (particularly SOEs) understand, keeping up with technological and economic developments at the regional, national and global levels makes the reality of their operations and future plans much more complicated.

In his case study, Prof. Chng and his co-authors have outlined SMG’s position in 2009. While working to expand the Shanghai Metro network to 400km in time for the city’s hosting of the 2010 World Expo, the group absorbed vital lessons that would shape its entire approach to building and operating its network. Taking cues from other leading cities’ metro systems that used a TOD approach (e.g. Stockholm, Singapore, Tokyo, Hong Kong), instead of simply building where the largest concentrations of people were, SMG wanted to create seamless connections between city centres, residential and commercial developments, while optimising urban land use for sustainable development. 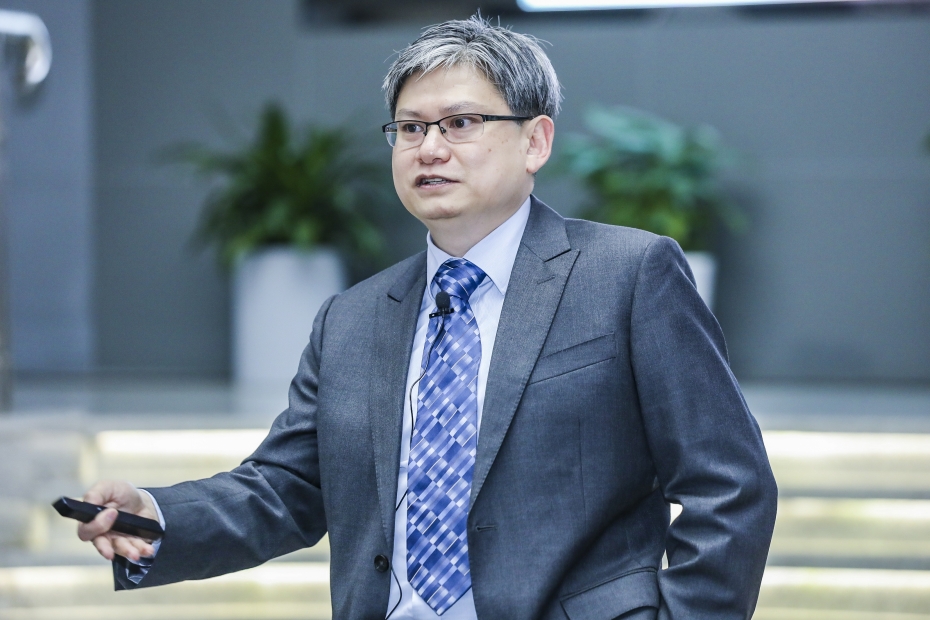 The essence of a TOD project is to develop residential and commercial real estate close to a metro station (within a one-mile radius or 10-minute walk). The TOD model involves the construction of a “cover” on top of a metro station or train depot, which serves as the foundation for real estate development. At the same time, it envisages making the best use of all walkable pathways and access paths to/from the metro station, to maximise the appeal and convenience of the development area. From desirable residential property to convenient office space and shopping experiences, TOD projects maximise the value of existing metro infrastructure by making it the focal point of new, highly sustainable urban developments.

TOD appealed to SMG because it allowed them to take full advantage of their access to suitable land around existing metro stations/depots and their technical expertise and knowledge of the surrounding terrain and land structure. At the same time, it offered a path towards a wide range of on-going benefits for the group and Shanghai, including raising public ridership and ticket revenue; reducing urban sprawl; cutting development costs; reducing traffic congestion; and boosting real estate value. This aligned with SMG’s need to secure its own long-term business prospects while also complying with its many social and operational goals as an SOE.

As part of her presentation, SMG VP Tong Ye delivered an overview of Shanghai Metro’s TOD strategy, key projects and its overall successes to date. She also highlighted the overriding importance of securing only the most reputable and reliable partners, whose competitive advantages in marketing, branding and business development could successfully complement SMG’s own strengths in planning, design and land acquisition. Next, she explained how this focus on creating a win-win situation with the right partners led to SMG engaging world-class firms like AREP for design and construction and PricewaterhouseCoopers and Deloitte for financial modelling. 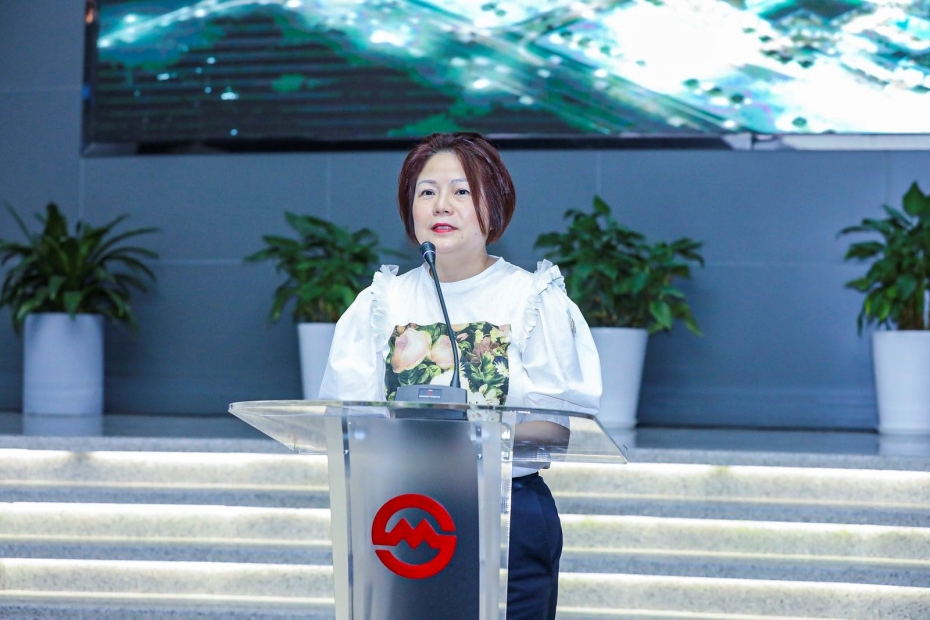 Guided by Prof. Chng, the group then explored the drivers for strategic transformation that prompted SMG’s foray into TOD. They also debated the implications of SMG moving from purely focusing on expanding their network as quickly as possible to creating high-quality infrastructure that seamlessly integrates into a comprehensive citywide transport system while enabling its end users to enjoy a range of lifestyle benefits. 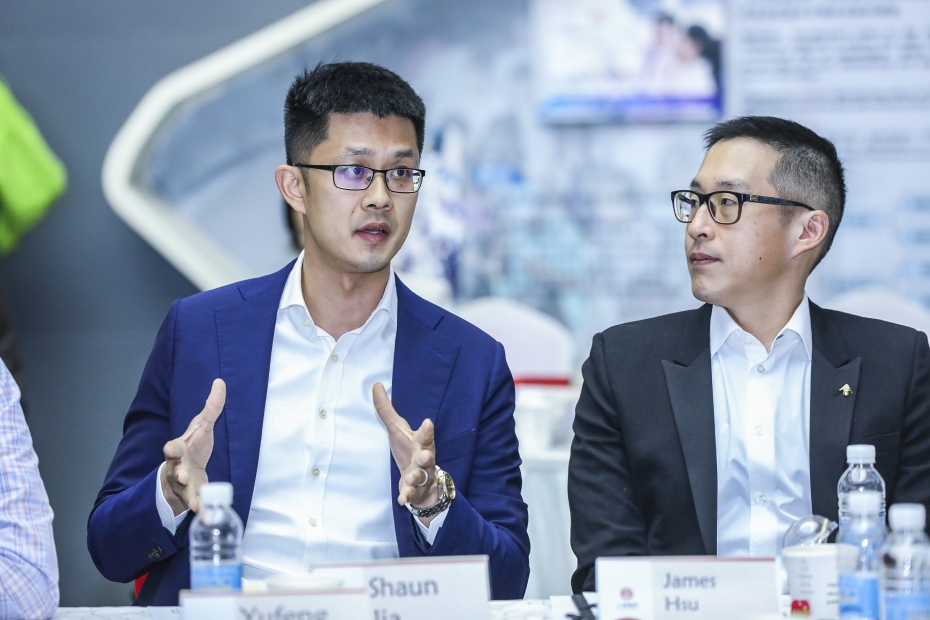 Next, they discussed how the sheer scale of SMG’s approach differs from those of regular private commercial real estate developers. SMG’s TOD projects are very big commercial entities and such scale is made possible partially due to SMG’s state-owned enterprise (SOE) status (since the Chinese Government generally remains cautious about releasing vast pieces of land to private enterprises). 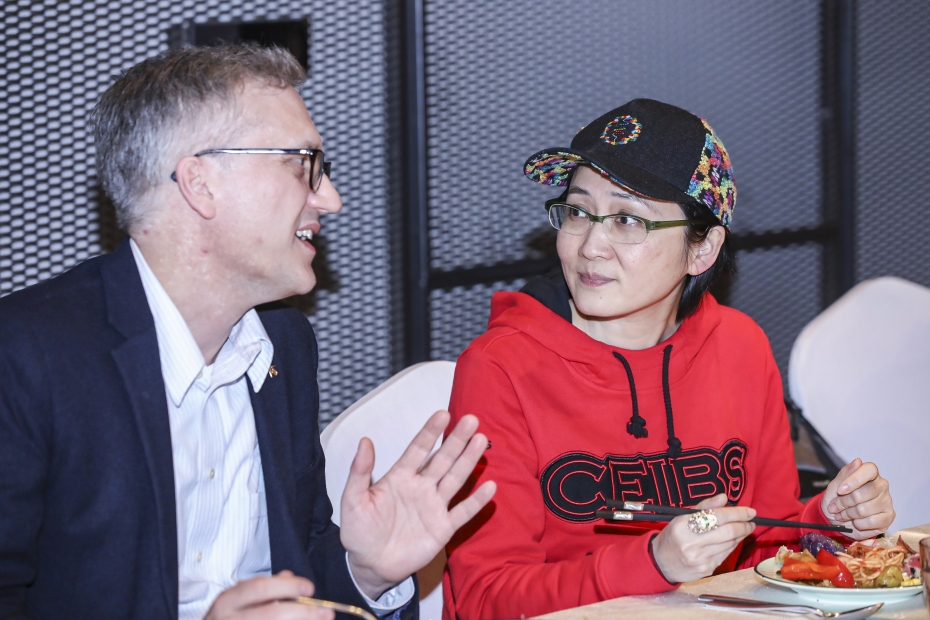 Other key points from the discussion ranged from SMG’s pioneering development of TOD technical standards and codes to how its plans aligned with the strategic requirements of the Chinese Government as well as the private investors and tenant companies involved in the delivery and management of the TOD project itself. More broadly, this prompted the Global EMBA students to further explore the misconception that Chinese SOEs are generally prone to becoming heavily bureaucratic and inefficient. In this way, the RSLM visit allowed participants to develop a rounded understanding of SOEs and business strategy, given the advantages in technical expertise, land acquisition and social capital that SMG utilised to deliver its TOD projects successfully.

RSLM helps Global EMBA students unlock a deeper understanding of business topics that may otherwise be too complex or unfamiliar. While classroom teachings and individual study can provide a reliable introduction to a subject and a sound base of theoretical knowledge from which the student can progress, RSLM is a means of lifting any given business concept or strategy off the page and giving it real-world substance and consequence. Students can see for themselves how the desired business change is designed, fleshed out and implemented into an existing organisational setup, and what impact such change brings. RSLM exposes students to the reality that combining practical experiences with a rigorous academic approach can provide much greater insights into any business scenario.

// The value of RSLM: Achieving a deeper understanding of business realities

“Real situation learning method visits are particularly useful in contexts unfamiliar to students and/or when a topic is complex. Such situations cannot be fully described in a teaching case and cannot be fully appreciated without witnessing the context. In this instance, students were able to witness the comprehensive TOD project (by way of a site visit) and hear from SMG’s executives about their experience in the strategic transformation of an SOE – an organisational form that many people are unfamiliar with or have incorrect beliefs about.”

“RSLM offers the unique opportunity to link academic concepts to the real world. SOEs usually have the reputation of being poorly managed. The successful strategic transformation managed by Shanghai Metro is a sound reminder that some SOEs are not only driven by very capable leadership but are also able to reinvent themselves. The visit was a crucial follow-up after exploring the business case. It gave us a true feeling of the dimension of the change operated by Shanghai Metro.”

“Real situation learning method visits offer students a much more comprehensive understanding of the company in question. Students see the site, hear from the company’s senior management, and talk directly to key leadership members responsible for the project or strategic initiative being examined. This brings the business reality into sharper focus and creates a more instructive example for students to learn from.”