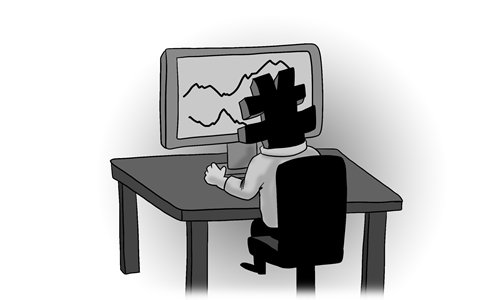 Rumour has it that the People's Bank of China (PBoC), China's central bank, may have been considering purchasing stock or exchange-traded funds (ETFs) directly from the market. We believe it's neither reasonable nor viable to do so.

Laws related to the PBoC clearly state that it can trade treasury bonds and bonds of other governments and financial institutions and exchange foreign currency on the open market, without explicitly ruling out the possibility of the PBoC purchasing stocks and/or ETFs, but it is not necessary for the PBoC to buy stocks in the market.

First, China's financial system is stable overall. Among the major economies in the world, only the Japanese central bank has made stock and ETF purchases before – something it did in a bid to promote financial stability and monetary easing. In 2017, China called for winning the "three tough battles", among them guarding against major risks, with financial risk being listed as an important example.

Shares on the Chinese stock market have stabilised at lower levels after experiencing a slump in 2018. Valuations are relatively low, but healthy. In addition, China has mitigated the risk of stock pledging (taking loans against shares one holds) through multiple channels. Available buffer funds have also proven to be an effective way to cope with fluctuations in the stock market.

The PBoC has no need to buy stock in this case.

Second, participation of the central bank in trading could amplify existing stock market volatility and interfere with the normal pricing function of the market. Retail investors in China are among participants in the stock market who may be tempted to buy high and sell low, making the market even more volatile. As a result, it does not make sense for the PBoC to acquire ETFs – irrespective of whether they are index ETFs or sector ETFs. Some might argue that the central bank weighing in on the stock market could support development in crucial areas. But industrial development ought to be backed by monetary and fiscal instruments, even industrial policies, instead of appealing to the PBoC.

Third, there are various other options available in the PBoC monetary toolkit. China is pursuing a prudent monetary policy and needs to stick with it. Plenty of other tools, such as reserve requirements (or cash reserve ratio), open market operations, targeted medium-term lending facilities, medium-term lending facilities and pledged supplementary lending, can produce similar results.

The PBoC buying stocks would make monetary policy vulnerable to stock trends, a fact which goes against macro-prudential rules. Prudent monetary policy rather than massive stimulus is essential.

Furthermore, the central bank buying on the secondary market would be like an airdrop which would actually go against the direction of monetary policy, since investors, and not the economy as a whole, would be the main recipients.

Fourth, the practice of buying stocks and/or ETFs would create a market supervision dilemma, affecting the PBoC's neutral position of implementing monetary policy in a system where individuals and institutions investing in the stock market are required to abide by regulations imposed by the China Securities Regulatory Commission (CSRC).

The CSRC also coordinates the buffer fund operations. If the PBoC, which works in close cooperation with the CSRC, were to become a player in the stock market, who would coordinate and supervise all the trading and operating?

Finally, a healthy stock market depends on the systemic reform of public companies and the stock market itself. Listed companies ought to improve their governance and make it their goal to become long lasting companies which are more competitive.

Regulatory bodies need to consider the best ways to deepen market reforms, including regulations for IPOs and trading and tapering mechanisms, in order to build a healthy equity market.

Sheng Songcheng is an Adjunct Professor of Economics and Finance at CEIBS, the Executive Deputy Director of the CEIBS Lujiazui Institute of International Finance (CLIIF), and a counsellor to the People’s Bank of China. This is an edited version of an article which originally appeared on the Global Times website here.