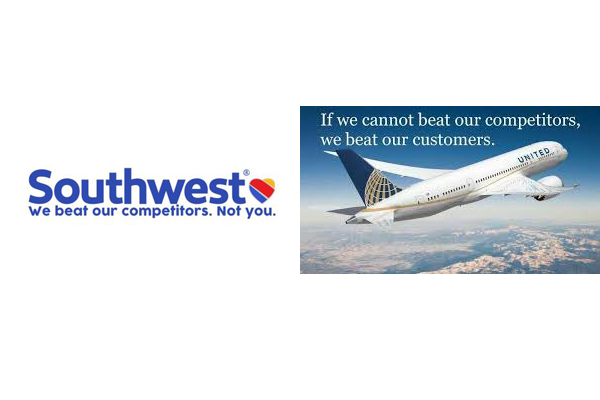 I never dreamed my academic research might one day be summed up in an internet meme, but this week, the findings of one of my research studies were echoed and splashed across social media both in China and around the world. These unofficial airline memes were among the hundreds created by netizens that flooded social media this week in the wake of a shocking video that showed a passenger being beaten then dragged off a United Airlines (UAL) flight from Chicago to Louisville, Kentucky after he refused to yield his seat to an airline employee. The incident occurred after the airline told passengers the flight was overbooked, and asked four to give up their seats so that United staff could take the flight instead. When no one volunteered staff chose four passengers at random for “re-accomodation”; one refused to comply. The company was excoriated on social media around the world for what happened next, and outrage grew after a series of ineffectual statements by company CEO Oscar Munoz. A day after the initial social media storm, United’s market capitalization dropped by $255 million as investors dumped its stock.

Though this incident may be a stand-alone event, my research shows that United’s plight is actually part of a broader trend that has plagued airlines, as well as other publicly traded companies who are under increasing pressure to improve their short-term performance in order to please analysts and investors with a rosy quarterly earnings report. In a research paper I co-authored with Javier Gimeno, a professor at INSEAD, we explored this by looking at data on competitive decisions made by US-listed airline companies between 1992 and 2006. We examined a simple hypothesis with an important implication: if earnings pressure is actually good for a company, it should guide managers’ decision-making, regardless of whether the company’s shareholders and managers are long-term or short-term oriented. Our findings show the opposite: firms with shareholders and managers that have a different time-horizon react to earnings pressure differently, implying earnings pressure may not always be beneficial for the company.

What happened on United Airlines Flight 3411 is just an extreme form of what has been happening in the past seven or eight years in the airline industry, as airlines try to cope with performance pressure. Companies in every industry have two ways they can improve performance – either increase revenue or cut costs; some try to do both. As our results, and the airline internet memes, show, Southwest Airlines has managed to stay firm in their long-term orientation, prioritizing customer satisfaction and improving efficiency, and still remaining competitive in the market. United, on the other hand, has been more myopic, putting good quarterly earnings that satisfy analysts and investors ahead of customer satisfaction.

Since the period we focused on in our study, things have only gotten tougher for the airline industry. After the 2008 global financial crisis, a series of mergers and acquisitions saw six large US airlines consolidate down to three, United, Delta (DAL) and American (AAL), plus “regional” carrier Southwest (LUV). Such tremendous market concentration gives the remaining airlines more power in the market. For passengers, this means it’s more difficult to find cheap tickets, the perks are gone, and service quality has declined. It actually raises the question, what does this pressure towards short term performance and profitability mean not only for the company but also for the consumer? The United incident suggests that no one wins.

So how do airlines like Southwest resist the pressure to chase quarterly earnings and stay focused on long-term competitiveness and brand-building? The findings of our study showed that airlines like Southwest have more long-term oriented investors who tend to buy shares and hold them for several years. They also tie their CEO and senior manager compensation to meeting more long-term goals. For example, the total compensation for Southwest’s CEO in 1997 included only $650,000 in cash and short-term incentives, while the rest was long-term stock-based incentives.

We also found that airlines like United, who are more short-term oriented tend to have more transient institutional investors – they typically invest in around 500 firms and buy and sell shares quickly for gains. These airlines also tend to use incentive compensation for their CEOS and senior managers that is tied to the company’s current stock price – such as shares or stock options that they can cash in immediately, rather than options that vest slowly over time. In contrast to Southwest, American Airlines paid $8.7 million cash and short-term incentives to its CEO in 1997.

From a strategic point of view, this is a big problem, and one that seems will only grow worse for the airline industry. The United incident should prompt regulators to think about exploring the consequences of such increased market concentration and earnings pressure. Companies can try to mitigate the problem by rethinking their mix of institutional investors and executive compensation to ensure both are aligned with long-term strategic goals. Customers can only hope more airlines will take this long-term approach. “We do not beat our customers, we beat our competitor” would seem to be a far more attractive proposition for all involved.

The results of the study can be found in the paper “Earnings Pressure and Long-term Corporate Governance: Can Long-term-oriented Investors and Managers Reduce the Quarterly Earnings Obsession?” which has been published by the journal Organization Science. Read the paper here.

This article was first published by Caixin Global.