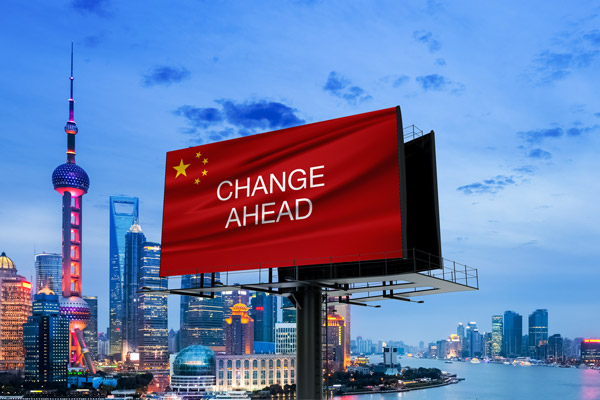 For anyone following the news these days, the word “China” may bring to mind an imploding steel industry, or maybe visions of big-ticket purchases by wealthy Chinese businessmen. But those two-dimensional portrayals fall short of conveying the complexity of the changes taking place in the country today. Here are four ways that China is changing, and what this means for you.

1. A SHIFT TOWARD HIGH-END MANUFACTURING.

Chinese manufacturers face an appreciating currency, higher structural costs and no way of increasing volume or price, as economies of scale are already stretched thin. As such, in a market where all the low-hanging fruit has been picked, their only option is to provide added value. This is why innovation has become a major focus for both the Chinese government and local companies hoping to strengthen their brands.

For European companies, this presents a golden opportunity. They have decades’ worth of accumulated know-how, they are technologically strong and they have well-known brands – but they are constrained by a limited home market. Working with China’s knowledge-hungry enterprises would give them access to a much larger market. This provides a win-win, as the Europeans gain market share while the Chinese boost profitability.

Even after a raft of economic reforms, China’s service sector is still woefully underdeveloped. In recent years, there has been strong interest in doing business in areas such as health care, education, finance, sports and entertainment. This is the result not only of demographic changes (urban dwellers needing access to amenities and services) but of an entire generation having accumulated wealth for the first time.

There are three opportunities here. First, European companies that have a proven track record in refined consumer products and services could gain a lot from collaborating with Chinese firms. Second, wealth management firms are needed to help family businesses with wealth transfer and succession issues. Third, there may be acquisition opportunities inside China, as decades of the country’s one-child policy means that some family firms may not have suitable successors.

3. THE GLOBALIZATION OF CHINESE COMPANIES.

The previous two shifts naturally lead to the globalization of Chinese companies, as they increasingly look beyond their borders for the tools needed to strengthen their positioning. China racked up roughly $170 billion in outward investments in the first six months of 2016 alone. These deals generate, on average, 5 percent in total consulting fees.

These globally focused Chinese companies represent a new wave of clients for M&A consulting firms, investment banks, auditing firms, law firms and so on. At the same time, some acquisitions will serve as the perfect high-priced exit for European companies looking for buyers. The Chinese penchant for retaining staff from acquired companies (because they need their know-how) makes M&As attractive options.

4. THE EMERGENCE OF CHINA-SPECIFIC BUSINESS MODELS.

The modern Chinese economy has its own depth and complexity, which is giving rise to a growing number of genuine innovations in business models and practices. Although some of these models may have earlier Western variations, the Chinese have modified them to make them country- and user-specific, creating new ones in the process.

For example, the success of the e-commerce giant Alibaba has a lot to do with the fact that it was able to fill the gaps created by the sheer size of the country and the inefficiencies in distribution. The social app WeChat has far outstripped competitors in terms of how deeply it can entrench itself in every aspect of users’ lives, occupying 35 percent of the four hours a day the average Chinese person spends on his or her phone. China’s fintech sector has also witnessed the introduction of innovative new financial products to meet the needs of a newly affluent generation.

Some of these business models could be applied to Europe, as well as to emerging markets from Africa to India. The most important takeaway, though, is learning how to modify existing models and create products and services specific to local needs.

These are just some ways in which a changing China can transform those inside and outside the country’s borders. Opportunities abound – if you know where to look.