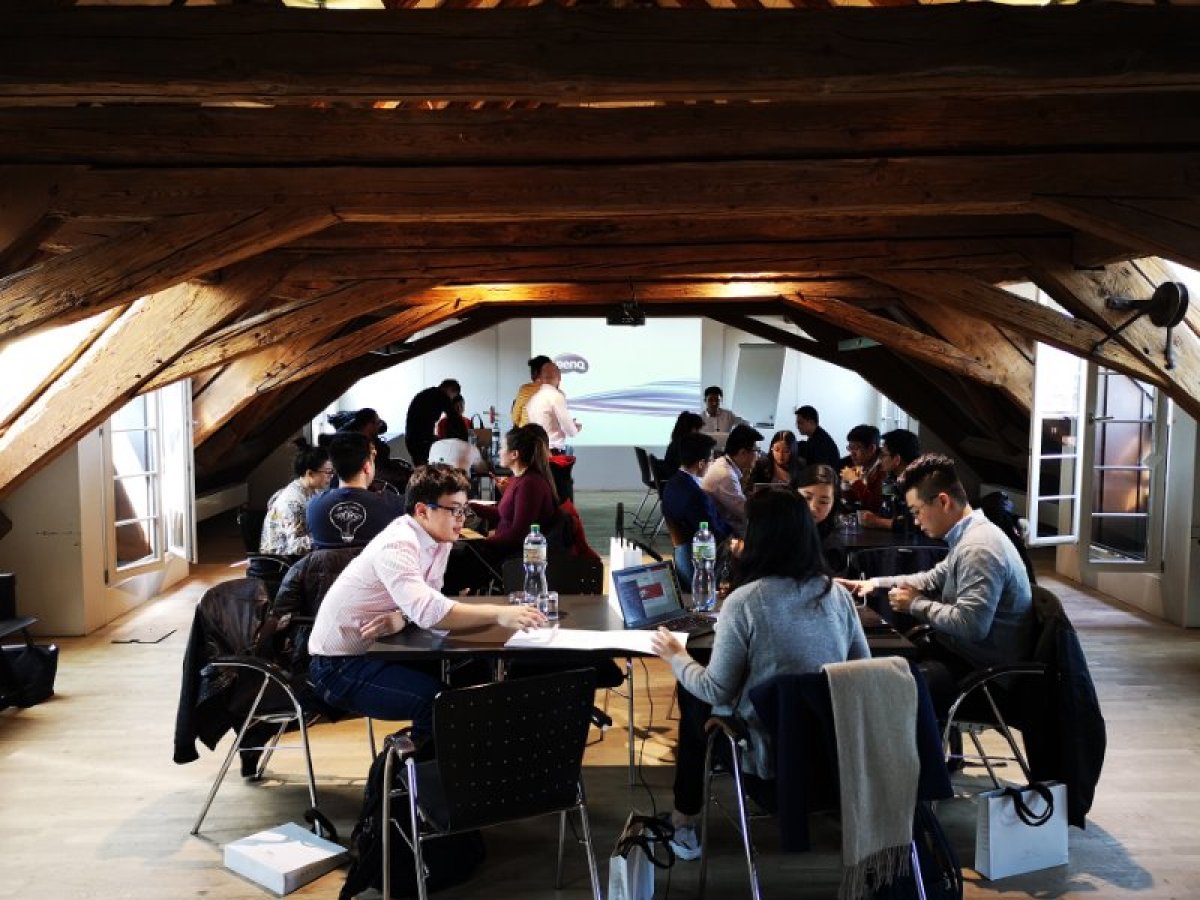 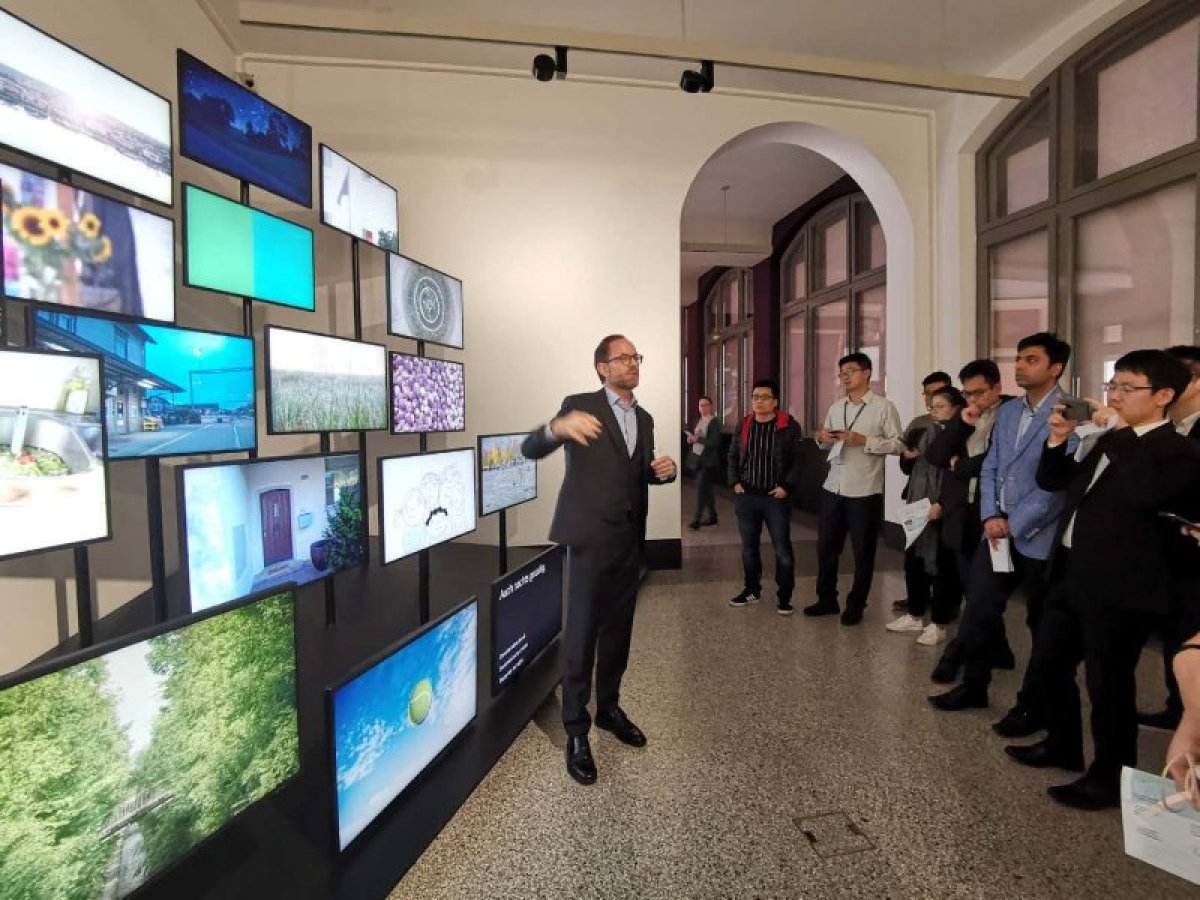 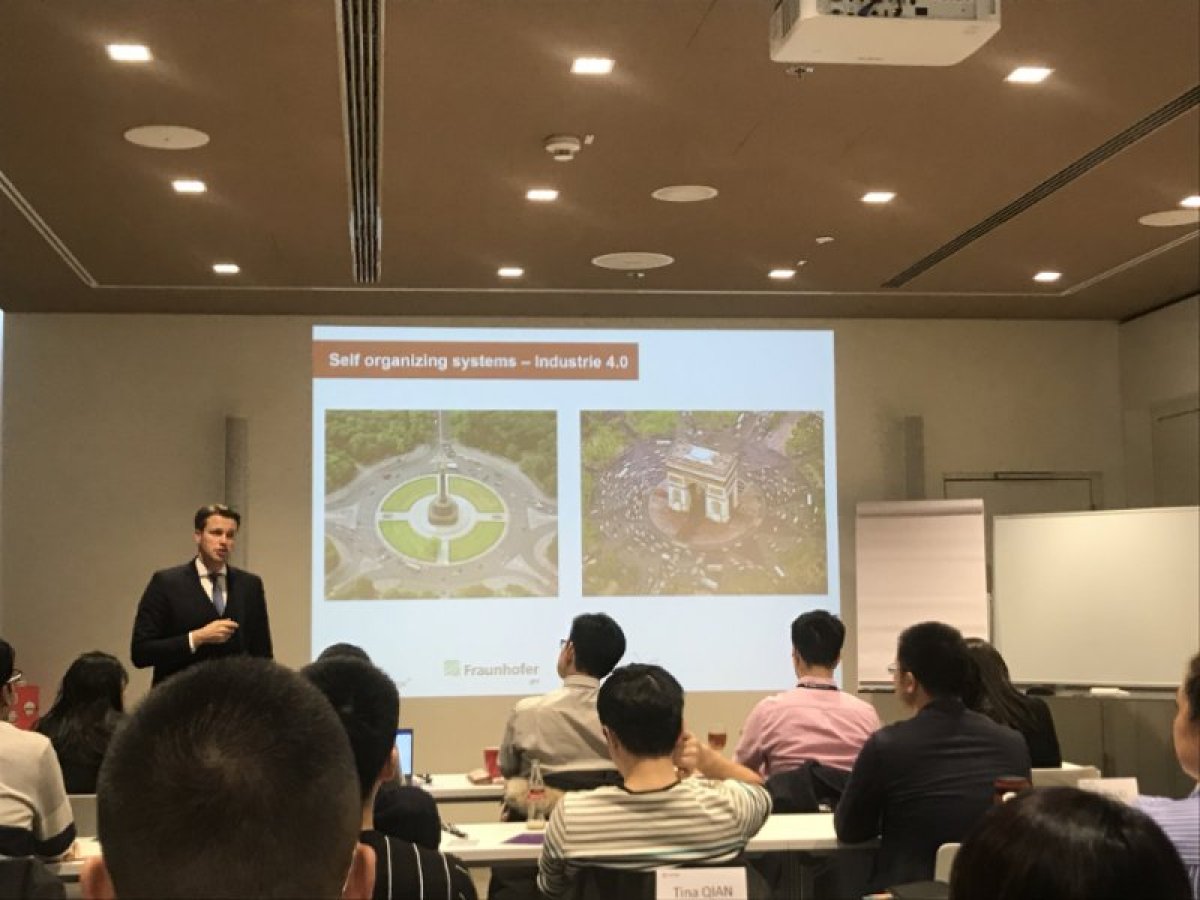 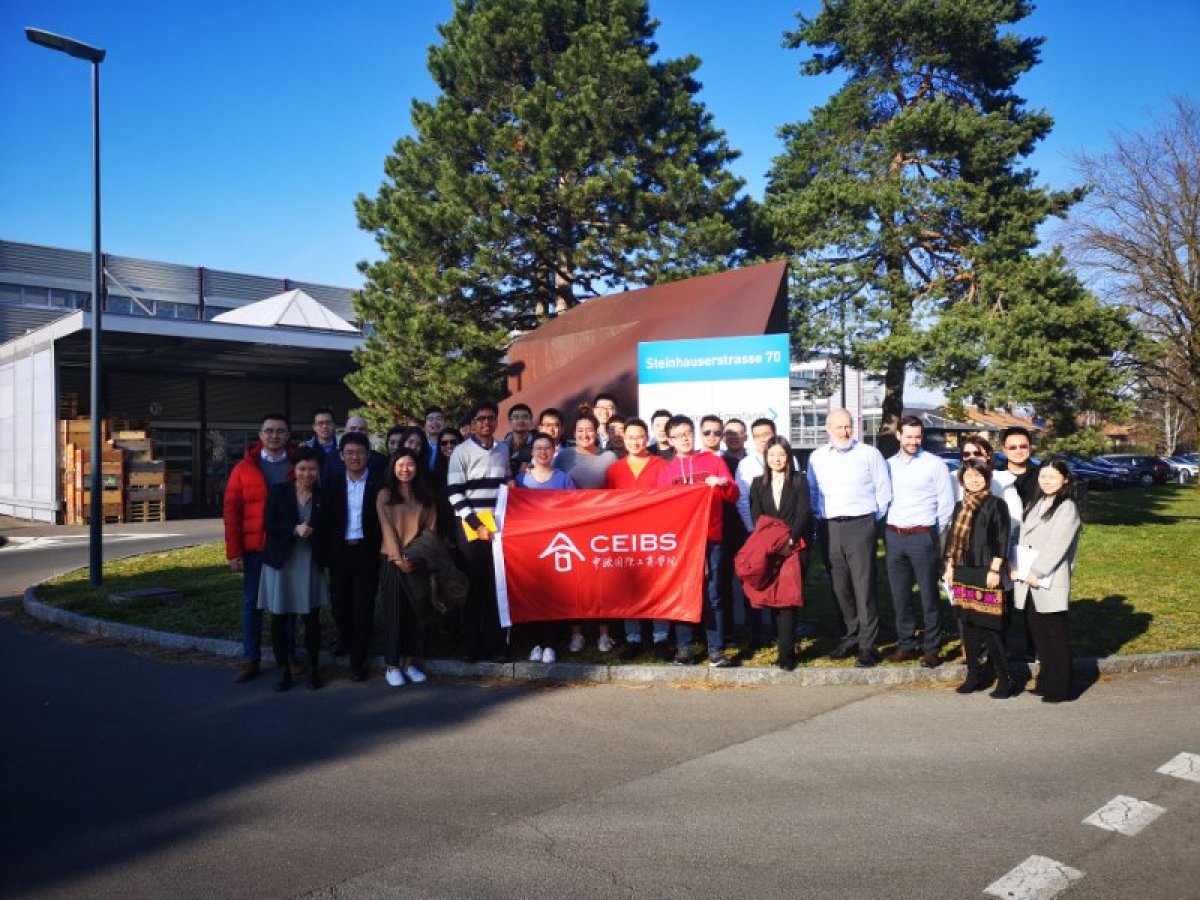 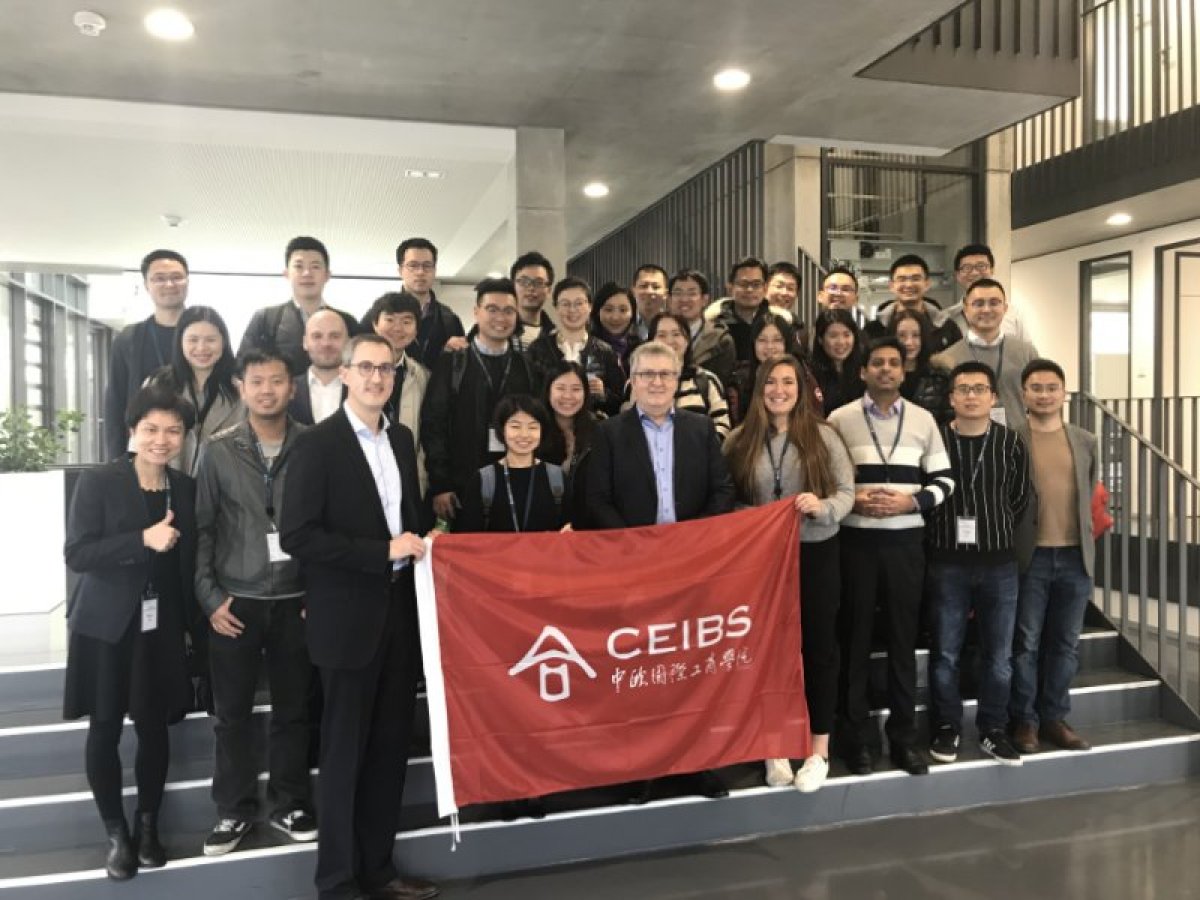 March 18, 2019. Germany/Switzerland – Starting at the Otto Beisheim School of Management and finishing at CEIBS campus in Zurich, a group of more than 30 MBA students from CEIBS recently embarked on a journey to explore the drivers behind excellence in manufacturing.

The module was led by CEIBS Associate Professor of Management Dr. Sebastian Schuh, who along the way provided some thoughts on the macro headwinds that are forcing German companies to pursue high value-adding activities in manufacturing. More specifically, with an aging population (37 years old being the average age of the country, 10 years older than that of China), expensive workforce (with minimum wage being about 25 Euros, compared to 10 Euros in Eastern Europe), and rising energy costs (with a planned discontinuation of nuclear power plants by 2022), German companies need to innovate on both the cost and revenue fronts – in particular, by being efficient in their production and/or increasing their pricing power with more differentiated products. Here are some of the highlights from the latest CEIBS MBA overseas module in Europe.

With the stage set, the group participated in a series of lectures by Mr. Tony Drescher (Industry 4.0 expert and founder of industrial innovation think tank KEX Knowledge Exchange) and Prof. Arnd Huchzermeier (Chair of Production Management at Otto Beisheim School of Management, aka WHU) on the technical “hard” aspects and the cultural/organisational “soft” aspects of Industry 4.0. Both lectures demystified the common misconception of Industry 4.0 being equivalent to simply using robotics to improve efficiency in production. In reality, on their view, Industry 4.0 is not only about leveraging robotics to automate certain workflows, but also – from a technical aspect – is about improving process efficiency through deep industrial analytics. This, in turn, requires a fusion of data analytics and domain expert knowledge and – from an organizational perspective – means enabling bottom up feedback from frontline workers through organisational empowerment. To drive home the importance of frontline empowerment, Prof. Arnd drew examples from BMW’s factories, where plant managers are responsible for getting feedback from frontline staff every day, as well as an instance where an exo-skeleton robotic assistance kit was developed based on frontline workers feedback.

Later that day, students went to visit Team Technik, a company providing automation solutions for production and testing in the automotive, solar, and medical sectors. A second-generation family business with EUR170 million in annual turnover and 1000 staff worldwide, Team Technik serves as a symbol of the innovative high value-adding strategy that has been adopted by some of the best German firms. With the highly technical and “white collar” nature of their work, Team Technik puts emphasis on hiring and retaining the best talents and taking a long-term approach in striving to become the best in their vertical niche. Indeed, in each of the past 2 years, the firm has won a widely acclaimed best employer award in Germany. The theme of family-owned businesses and their long-term approach and dedication to becoming experts in their verticals was an important thread throughout the module. Later in the week, MBAs visited another family business in Zug, Switzerland, called Bossard (now in its 7th generation) which is continuing to define its vertical (C-parts management) in new ways using integrated software and system offerings on top of their hardware products.

Why the future is green for OEMs

As the week progressed, the group continued to visit institutions around the Stuttgart and Zurich area and participated in lectures, talks, and company visits with various representatives and thought leaders, including those from Staubli (a leading robotics solutions provider with CHF1.8 billion in annual turnover), Google, and IWC. On Tuesday, students were treated to a tour of Audi’s Naukersaul plant along with presentations from thought leaders at WHU and Roland Berger. At the Audi plant, the group saw industry-leading manufacturing aided by the heavy use of robotics and connected technologies that streamline production. Following the tour, at the conference rooms located in the plant, MBAs listened to a presentation from senior leaders in the automotive practice at Roland Berger. Despite being at the forefront of manufacturing, OEMs (like Audi) face imminent threats on a number of fronts, including shared mobility, autonomous driving, digitalisation, and electrification. In response to these and other trends – such as ride-sharing firms offering alternative mobility solutions and electric powertrains offering lower margins – OEMs need to innovate not only on the cost front, by being more agile and lean, but also on the revenue front, by offering customisation options for the masses. At the same time, the importance of being a “green factory” and minimising their environment footprint is being increasingly emphasised. With the many moving parts and lack of a clear blueprint ahead, the automotive sector is sure to be a dynamic space in the years ahead.

Zurich - How to brand a city

On the third day of the module, the group moved to the classroom at the CEIBS Zurich Campus with presentations from thought leaders on digital transformation and branding. There, in the digital transformation presentation, the group learnt about how digital technologies are enabling new business practices and changing industry landscapes. As speaker Ger Ramirez put it, because of digital technologies, industries are now increasingly more disrupted by “out-dustry” players (companies outside their respective industries). For example, Facebook has become a news delivery platform with 0 journalists. In another presentation, branding expert and Swiss native Ralph Hermann gave students a glimpse of the principles that make Swiss branding so powerful. During his talk, he noted that key aspects of building great brands include the need to be authentic, differentiated, and able to meet the needs of consumers intimately. These talks were essential in setting the stage for a memorable visit to the Swiss National Museum later that afternoon.

With markedly less resources than world-leading museums like the New York Metropolitan British Museum, the Swiss National Museum still carves out a niche of its own with its unique “new wing” architecture and innovative artistic displays utilising augmented and virtual reality (AR/VR) technologies. Numerous exhibits in the museum feature cutting edge projects that lie at the intersection between art and technology, such as an immersive 3D rendering of Zurich Hauptbahnhof – the city’s main railway station. Indeed, because of the scientific and technological prowess of institutes such as ETH Zurich, the city receives a steady influx of technological innovations. As the tour came to a close, the group dispersed into smaller groups and went onto explore the many restaurants and shops Zurich has to offer.

What drives innovation at Google?

On the final two days of the module, the CEIBS MBAs continued to learn about innovations and excellence in the Swiss region. One particularly memorable panel was a sharing session featuring an executive from robotics firm Staubli and a CEIBS alumnus from Google. The discussion not only covered ground from robotics, but also offered students a look at the engine that drives innovations at Google. Among other things, the group learnt about the OKR system that is used to measure performance, the 10x thinking advocated by Astro Teller, the iterative process to launch projects, and the importance of a data-driven culture. Shifting gears away from the technological side, during another memorable activity, the group got an exclusive tour of IWC Headquarters at Schaffhausen. The tour included looks at the museum and factory, and offered students a glimpse at the history and craftsmanship behind IWC. With the advent of wearables and digital watches, IWC and the broader Swiss watches category have not only braved waves of change, but have also continued to position themselves masterfully as luxury pieces that are emblematic as couriers of success.

Despite the wide range of industries covered throughout the module, the group experienced a constant theme of innovation on both cost and revenue fronts – be it branding mastery at IWC, 10x thinking at Google, or cutting edge production systems at Audi. As the week came to a close on Friday, with a collaborative group sharing session, it was clear that everyone had found their own answers to the question of German and Swiss excellence in manufacturing.