Greater resilience needed to thrive in an unpredictable future 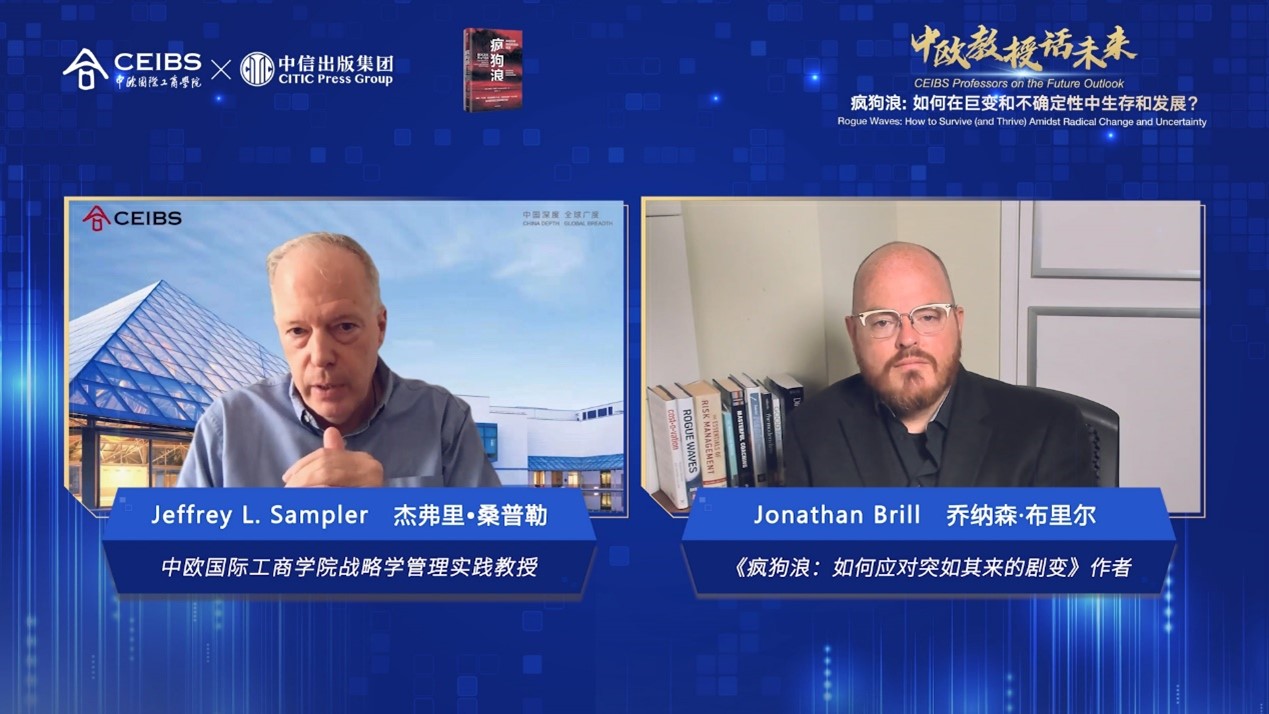 The event, part of the CEIBS Professors on the Future Outlook series, featured a fireside chat between Mr. Brill and CEIBS Professor of Management Practice in Strategy Jeffery Sampler exploring how can companies prepare for future unknowns and survive (and thrive) amidst radical upheaval.

These events, which occur more frequently than ever before, have posed challenges for organisations, as business leaders, policy makers and individuals struggle to navigate these waves of change and stand out amongst their competitors.

“As the world gets more connected and moves faster, there’s every reason to believe that we’re going to see more of these rogue waves appearing out of nowhere,” Mr. Brill said.

The secret for success, he continued, lies in how to be resilient no matter what happens next.

“In a world of increasing structural growth constraints, we need to think about how to take advantage of disruption, instead of just how to manage it.”

Mr. Brill further noted three things required for companies to spot rogue waves and build resilience before their competitors do:

First, be familiar with today’s social, economic, technological and political changes and prepare for the range of changes that are likely to happen.

Second, take a look at what consistently impacts your organisation, including financial, operational, external and strategic risk (what Mr. Brill calls the “four FOES”).

Third, devolve more command and control down to lower layers of your organisation so that everyone involved can reorganise when rogue waves hit.

“We don’t know what will cause the next dramatic event, but we know a lot about what the world will look like after. And if we start to prepare ourselves for what the world looks like after and make small decisions today, that increases our options and our potential no matter what happens,” he explained.

That said, Mr. Brill acknowledged that, in the times of radical changes, business leaders need to shift their mindsets from commanding to coaching.

“In times of disruption, the instinct is to command and control and tighten the grip. The reality, though, is that, when everything goes to heck, what you need to do is loosen that grip […]. It’s this balance of getting that control while giving it up at the same time, so that people can innovate faster than you can tell them what to do,” he said.

This requires leaders to develop better executive communication skills, executive judgment skills, and environmental intelligence, and help their people understand why they are “turning the crank.”

“We’ve got to communicate and get those skills deeper in the organisation if we want to get ahead of situations, both in terms of how we give directions and how people give feedback,” he added.

In wrapping up the event, Mr. Brill suggested that MBA students learn more about epistemology and think about unknown situations.

“Our role as managers is to help our people figure out how to know more about the situation, so that they can operate differently, more efficiently, and more innovatively. The next generation of leaders have to think not only like lawyers and scientists, but also like economists and artists,” he said.

He added that young professionals should consider war gaming, a strategy in business and military used to simulate and predict outcomes on the battlefield, in their careers.

“One way to do that is to have a conversation with your parents, or your parents’ friends, and ask them what happened in their life that they didn’t expect,” Mr. Brill said.

“Make small steps today to increase your optionality and potential. If you do that over time, you’ll find that even though you don’t know how things will work out, you start operating with greater ease and [can move] forward to get where you want to go,” he concluded.