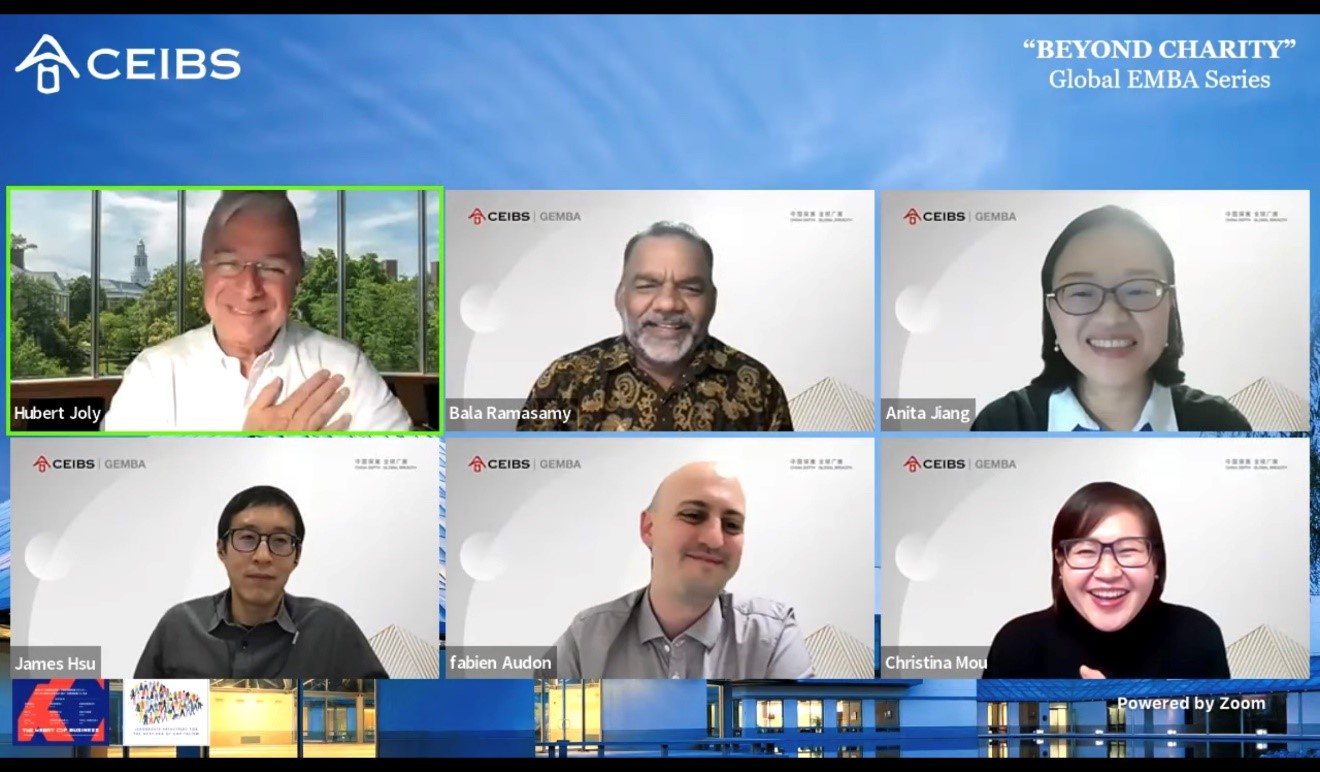 May 19, 2022. Shanghai – Purpose-driven leadership and putting people over profits are crucial to driving organisational performance through crisis and beyond, former Chairman and CEO of Best Buy Hubert Joly said during a virtual CEIBS Executive Forum tonight.

The event, featuring Mr. Joly and CEIBS Professor of Economics Bala Ramasamy, explored key factors behind Best Buy’s stunning turnaround during Mr. Joly’s tenure with the US consumer electronics retailer between 2012 and 2019, and the importance of leading with purpose and humanity.

“The secret source for the turnaround was a very human-centric approach, which falls into two phases,” Mr. Joly told an online audience of more than 12,000 people.

The first phase was the turnaround itself. Unlike during most turnarounds, which focus on closing stores and layoffs, Mr. Joly placed people at the centre by embracing all stakeholders in a declaration of interdependence and treating profit as an outcome (not as the goal).

“A lot of the advice I was getting from analysts and investors was cut, cut, cut […]. Firing people implies that people were the problem – I thought people would be the solution,” he continued, adding that a company is a human organisation made of individuals working together in pursuit of a goal, and a head count reduction should be a last resort in a turnaround.

By the time Mr. Joly took over Best Buy, the company was on the verge of demise, faced with both competition with Amazon and decreasing customer engagement. New to the company and the retail sector, he spent time in the company’s St. Cloud, Minnesota store with a badge labelled “CEO in training” during his first week of work, listening to what front liners and customers had to say.

“For us, listening to the frontliners is a big leadership lesson, especially in this very uncertain world – leaders cannot be know-it-alls. We have to learn it all, and the best place to learn is on the frontline,” he said.

The second phase focused on what Mr. Joly calls “building the new blue,” which was all about defining and pursuing a noble purpose.

“What is the good we want to do in the world? We’re a company here to enrich the lives of our customers through technology by addressing human needs [rather than a retailer],” he said.

This shift in mindset in relation to customers was not only inspirational to employees, but also translated into concrete strategic initiatives which helped the company open up new business territory and serve customers outside of the store.

For example, Best Buy made it into the healthcare market, helping aging seniors live in their homes independently, for longer, with the help of technology, Mr. Joly explained.

“We put sensors under their beds, under their sofas, in the kitchen, and in the bathroom. Through remote monitoring and artificial intelligence, if something bad happens, we can detect it and trigger an intervention,” he said.

Equally important, he pointed out, was to create an environment where every employee could feel they belonged and where they could be the best version of themselves.

“By having this focus on people, whether it’s the employees, the customers, the vendors, the shareholders, and pursuing a noble purpose that makes sense from a business standpoint, you can create extraordinary business outcomes. This is leading with the heart and the brain and all of our body parts,” he continued.

In his new book, The Heart of Business: Leadership Principles for the Next Era of Capitalism, Mr. Joly draws from his Best Buy experience to reflect how the world of work can and will change, especially during the COVID-19 crisis.

“I think leadership today is not about being the smartest person in the room, nor having the answers, but about being purpose driven, values driven, and working with teams and empowering our teams to do the best we can,” he concluded.

Learn more about The Heart of Business here.