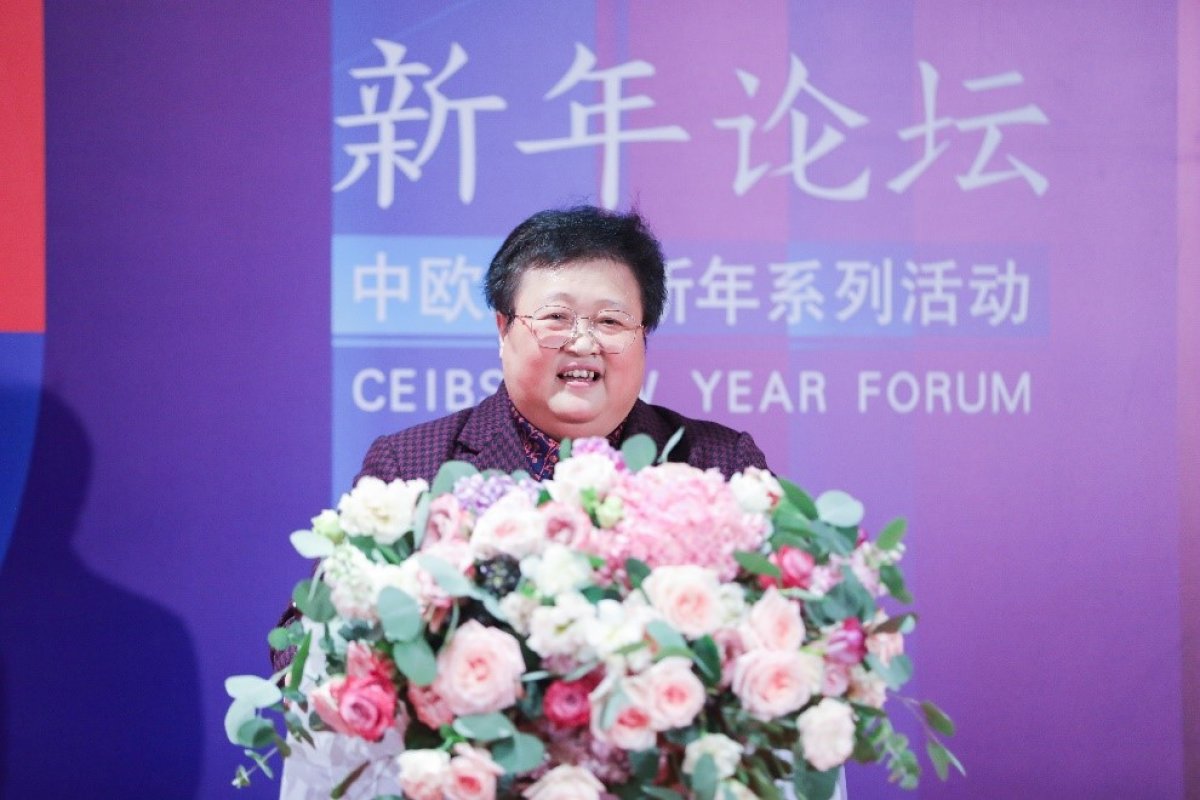 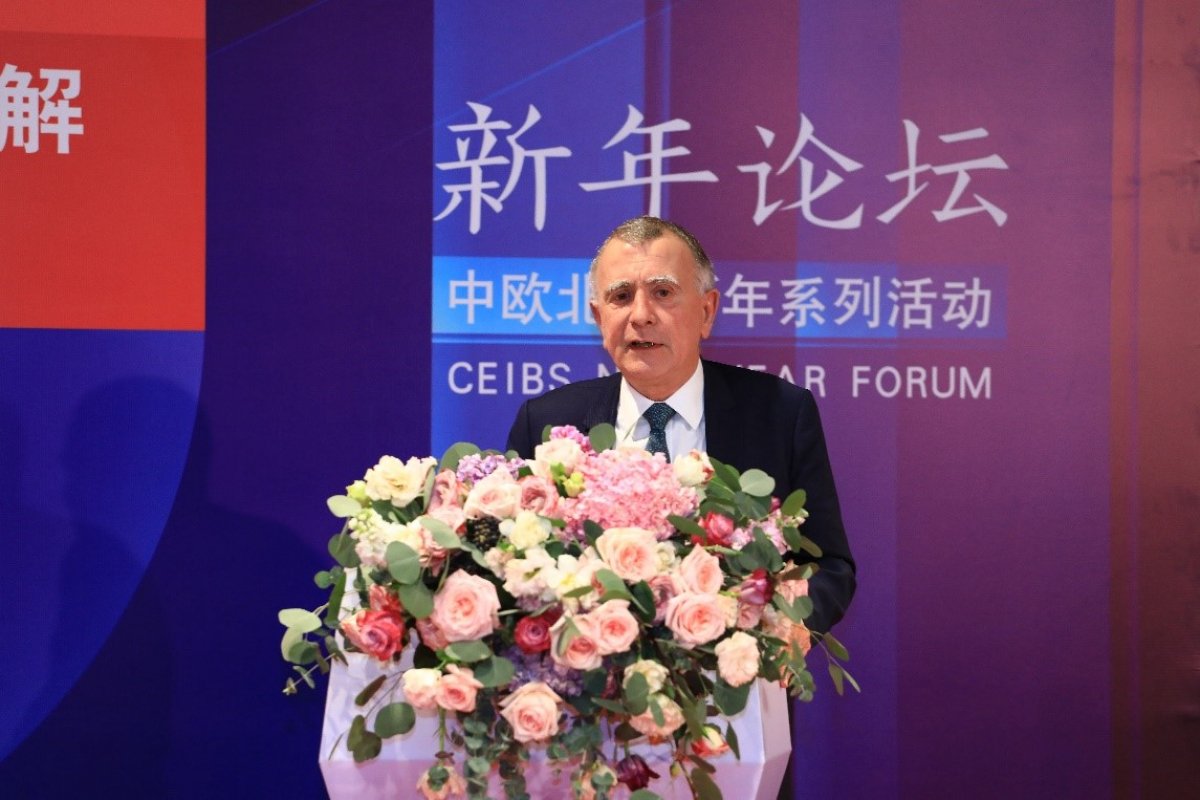 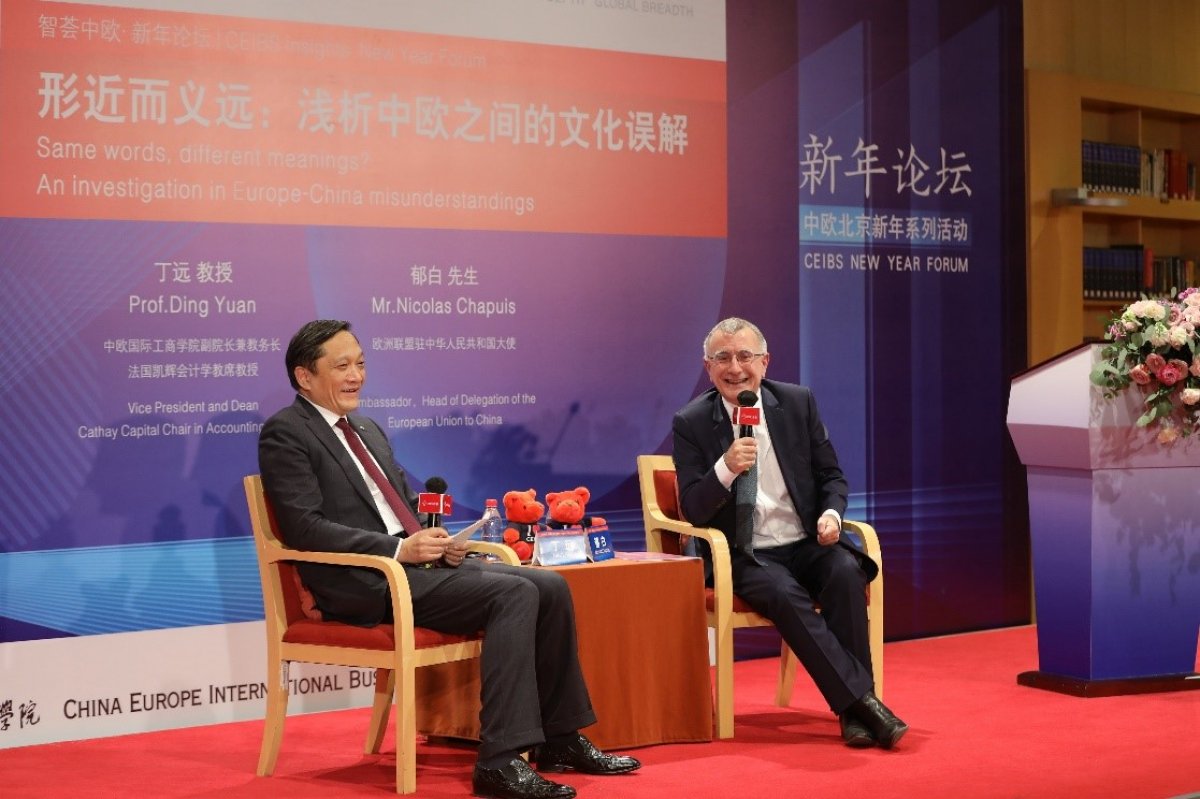 December 12, 2020. Beijing – The CEIBS Beijing New Year’s Forum was held today at the National Centre for the Performing Arts. EU Ambassador to China Nicolas Chapuis was invited to deliver a keynote speech entitled, “The Form is Close, but the Meaning is Far – An Analysis of Cultural Misunderstandings between China and Europe”. CEIBS President Wang Hong also attended the forum and delivered the opening speech. The event also featured a dialogue between CEIBS Vice President and Dean Ding Yuan and Ambassador Chapuis about how to bridge differences and promote mutual trust and cooperation between China and Europe.

In her speech, President Wang said that CEIBS’ achievements have been derived from the close collaboration of China and the EU, the pursuit of excellence by the school’s faculty and staff, the support from the CEIBS alumni community and their dedication to social responsibility – all of which will continue to inject energy into the school’s future development. She added that, in the future, CEIBS will continue to expand its global vision through various forums, think tanks, and research platforms, co-operation with global entrepreneurs and by empowering its alumni. Moreover, President Wang said, CEIBS will become a model for the training of talent and for exchange between China and the EU and a strategic platform for economic, social and cultural integration and development. Finally, President Wang said that she believes that, with the support of the Chinese government and the EU together with the joint efforts of the school’s alumni, CEIBS will be able to reach new heights.

Ambassador Chapuis said in his keynote speech that in the context of globalisation, nations may use common vocabulary, but it is still easy to overlook the different meanings of words in across cultures. He then explained the meanings of “mutual understanding” and “cultural deficit”, enumerated a number of cultural differences in translation, pointed out the necessity of acknowledging cultural differences and, finally, analysed how to bridge the differences between Europe and China. Ambassador Chapuis continued that the EU is willing to create appropriate conditions for enhancing understanding. For example, he stated, it plans to hold a special conference to discuss cultural misunderstandings between Europe and China, to promote discussions between academics on both sides and to publish a “misunderstanding dictionary” to help everyone better understand and bridge their differences. He also praised CEIBS’ success as an example of enhancing understanding. On one hand, he noted, it has effectively aided Chinese business leaders in understanding the world more comprehensively and, on the other hand, it has helped business leaders from all over the world better understand China.

During his dialogue with Ambassador Chapuis, Dean Ding pointed out that, in the era of globalisation, China and the world are deeply integrated in terms of business activities, including trade and investment. As such, he said that understanding how to communicate and work with people from different languages and cultural backgrounds has become a necessary skill. He then cited examples of linguistic and cultural misunderstandings, not only between China and Europe, but also among major European countries. Dean Ding and Ambassador Chapuis then discussed how to “seek common ground while maintaining differences” between cultures, and how to strengthen the understanding of deeper cultural and historical symbols.

This year was the fifth year that CEIBS Beijing campus has hosted the New Year’s Forum. As an important part of the CEIBS Beijing New Year’s series of activities, the New Year’s Forum focuses on current economic topics and features CEIBS professors, well-known scholars, politicians and alumni to give keynote speeches and interact with members of the CEIBS community. It is now annually one of the most anticipated events among the school’s alumni in Beijing.