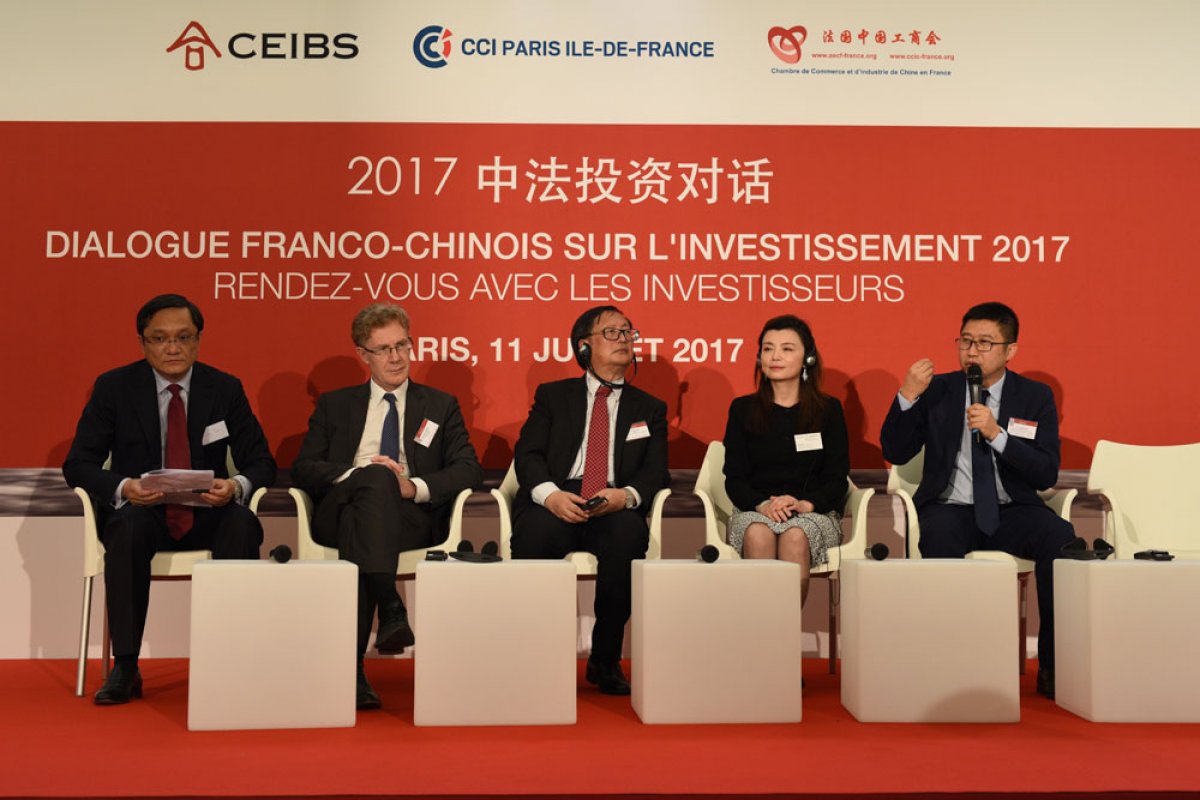 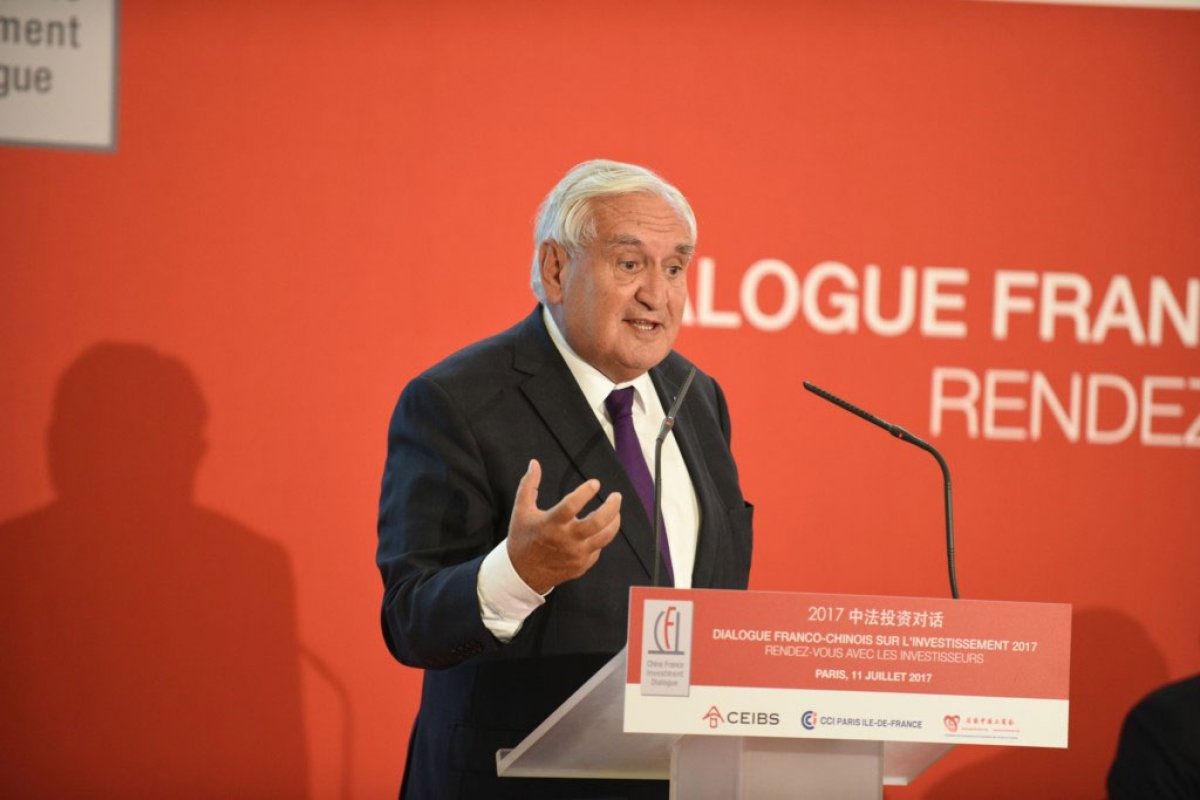 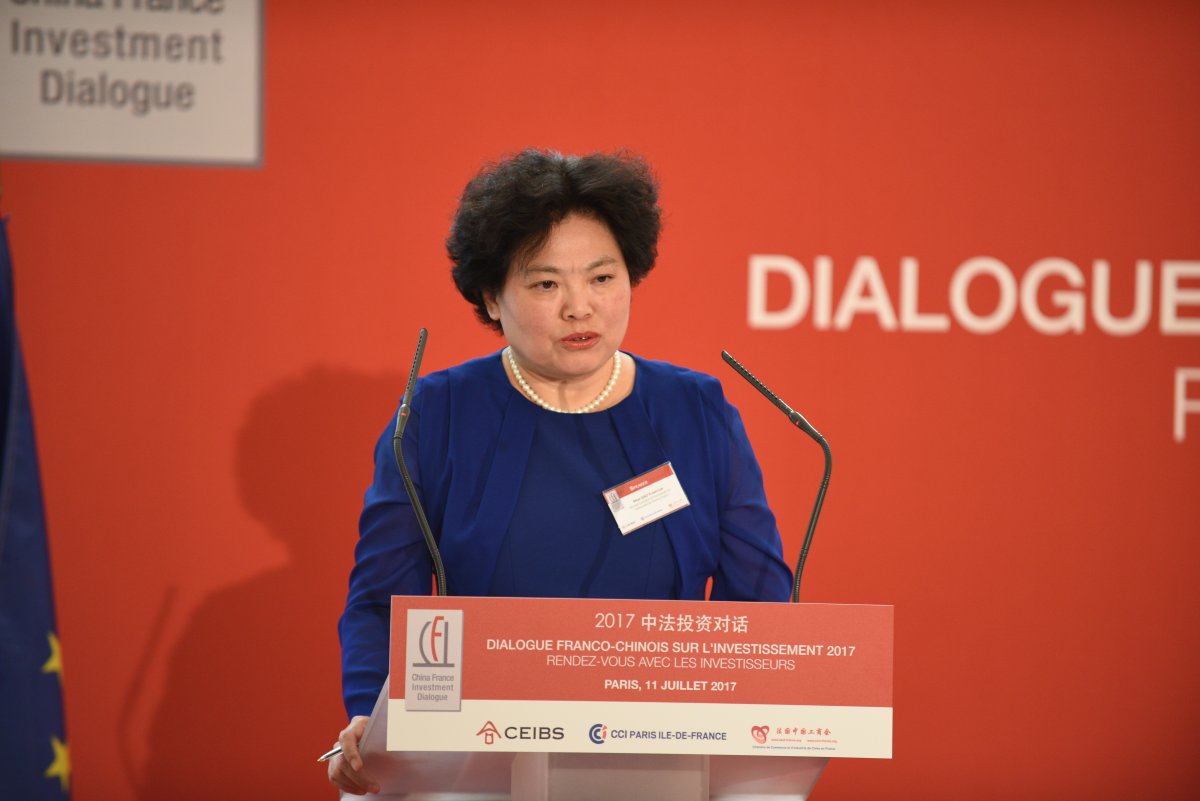 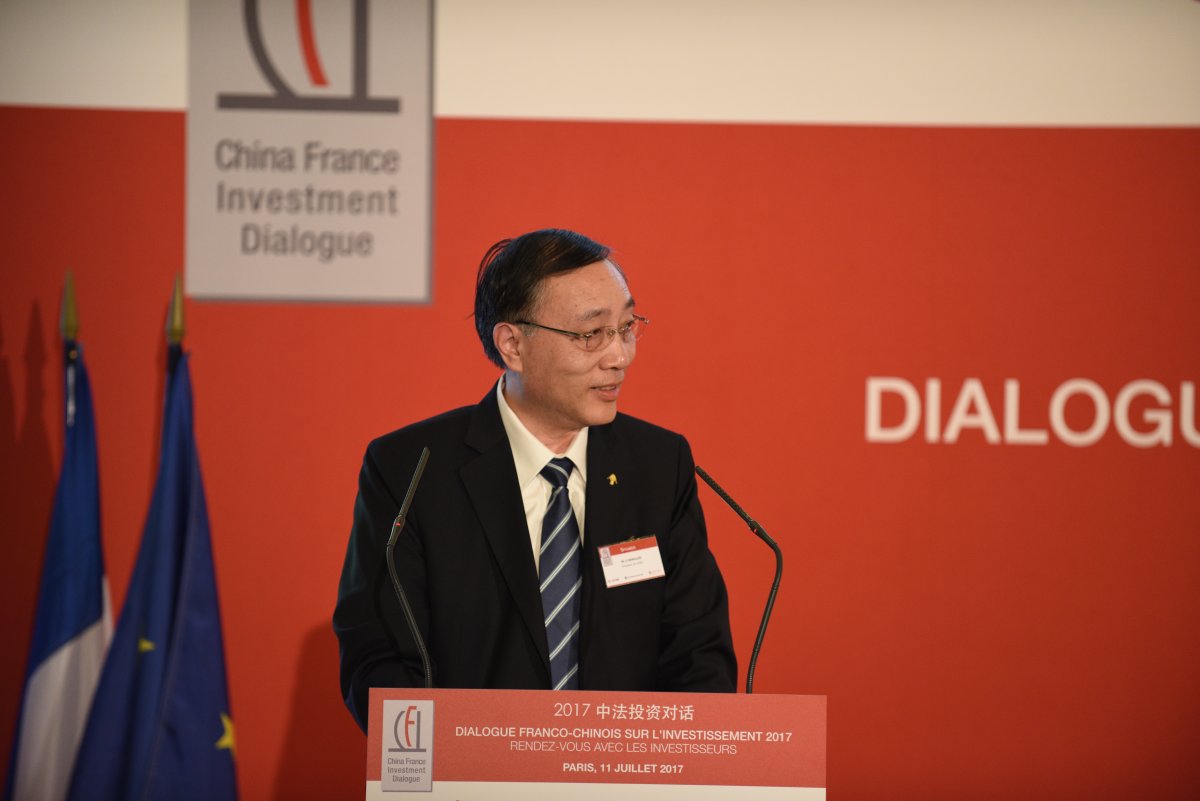 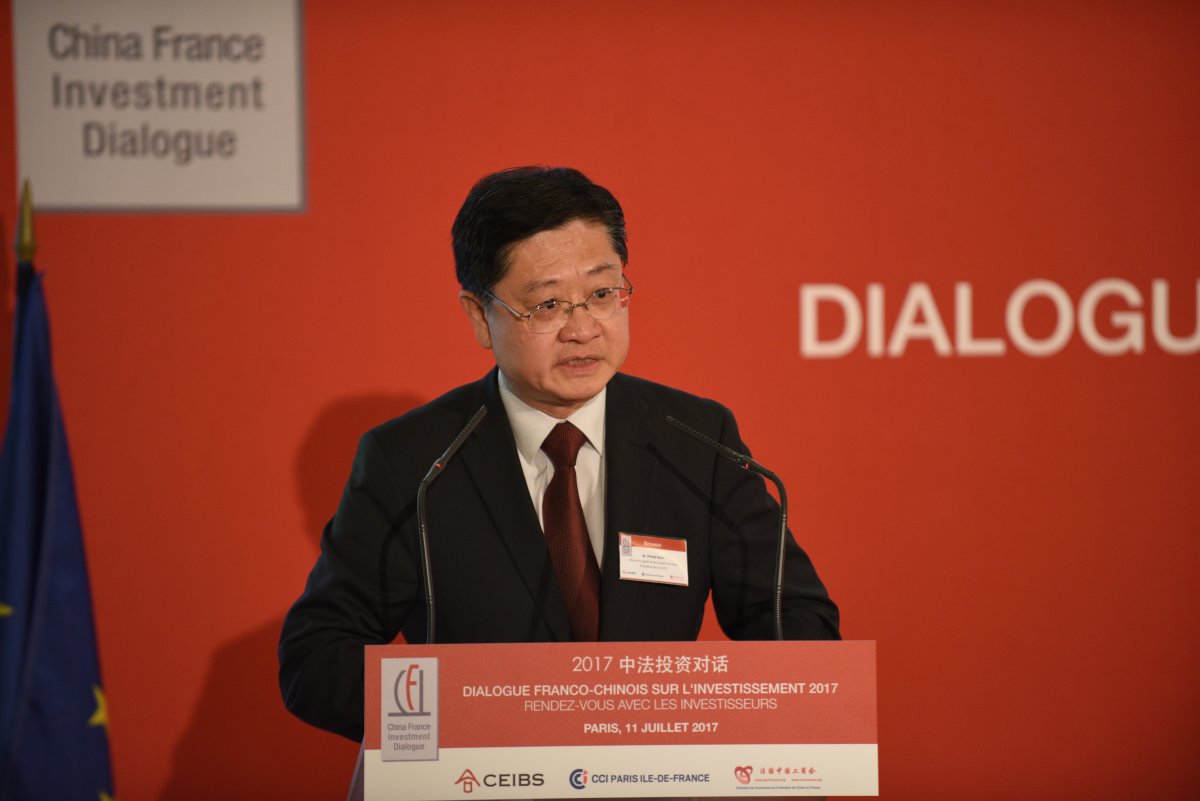 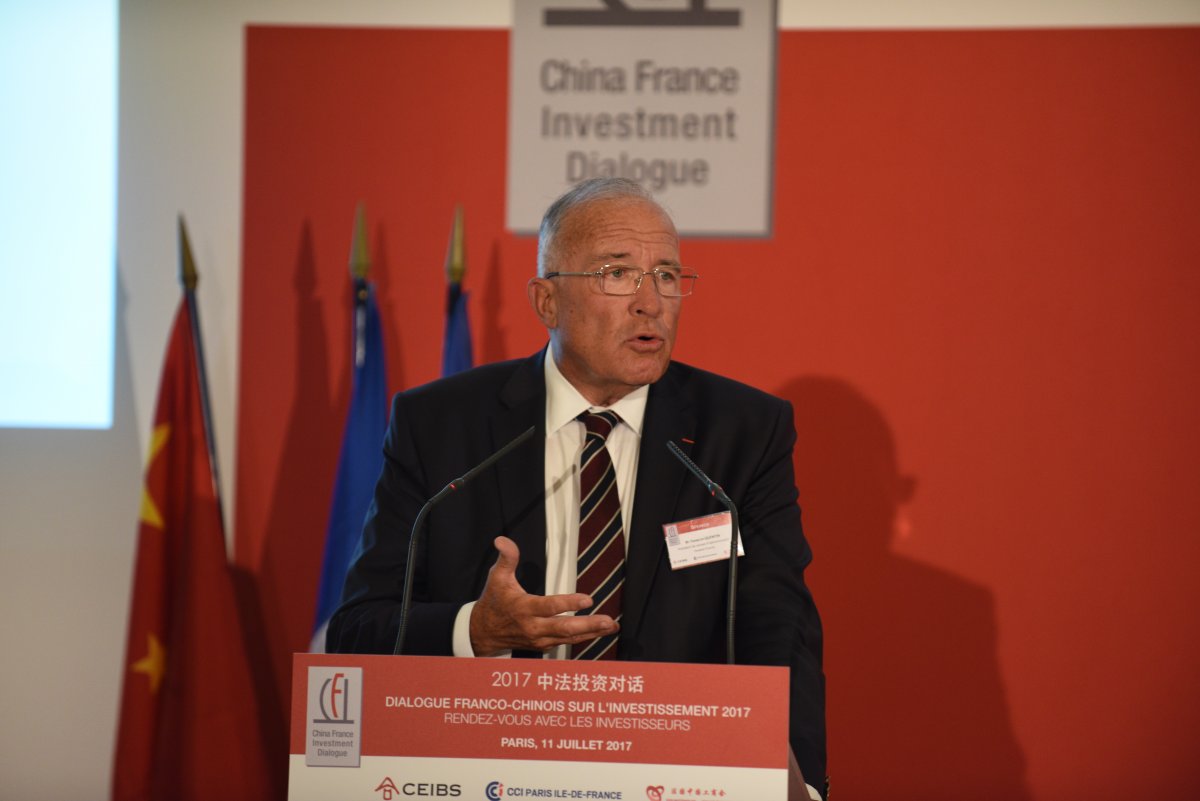 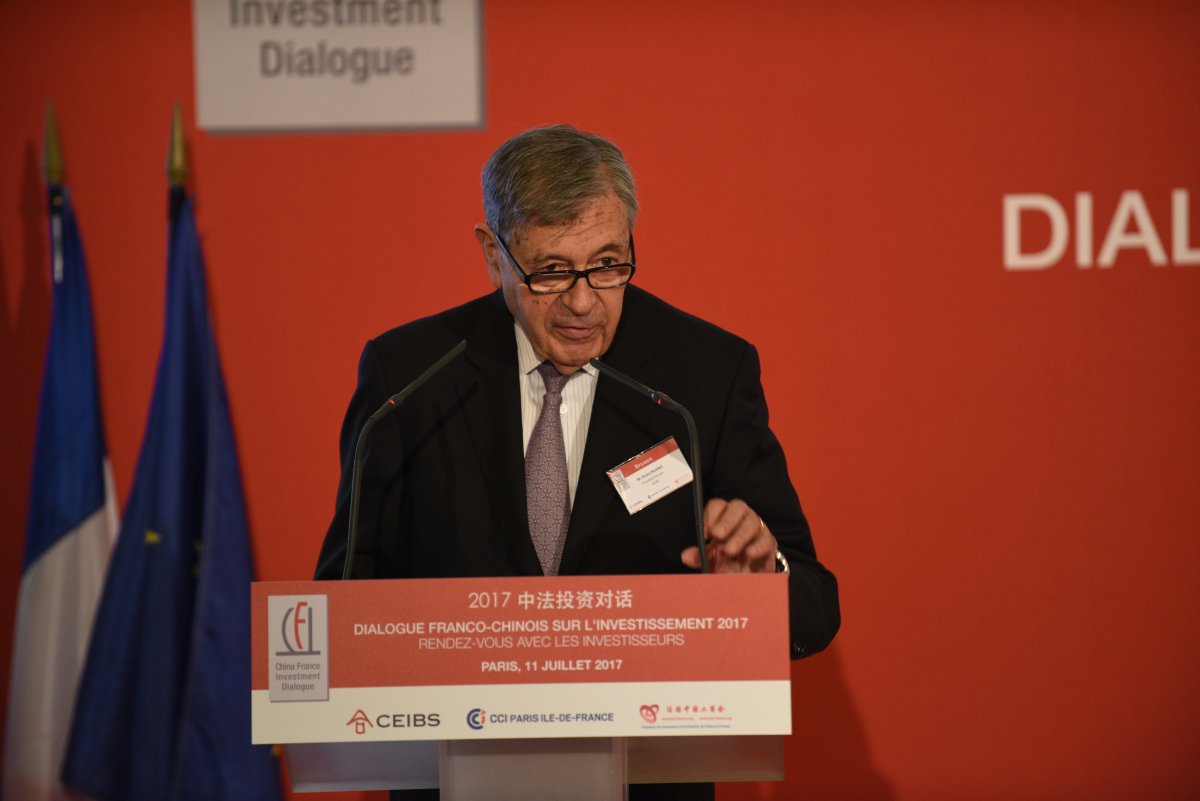 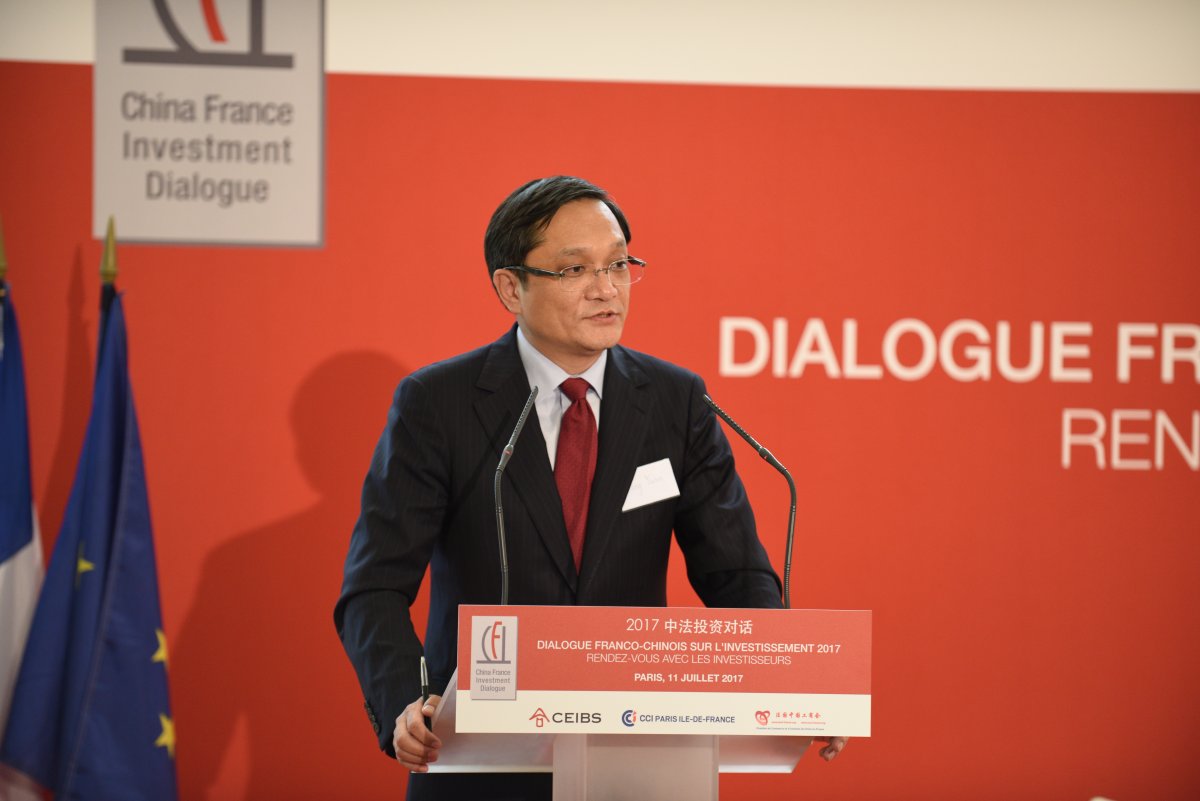 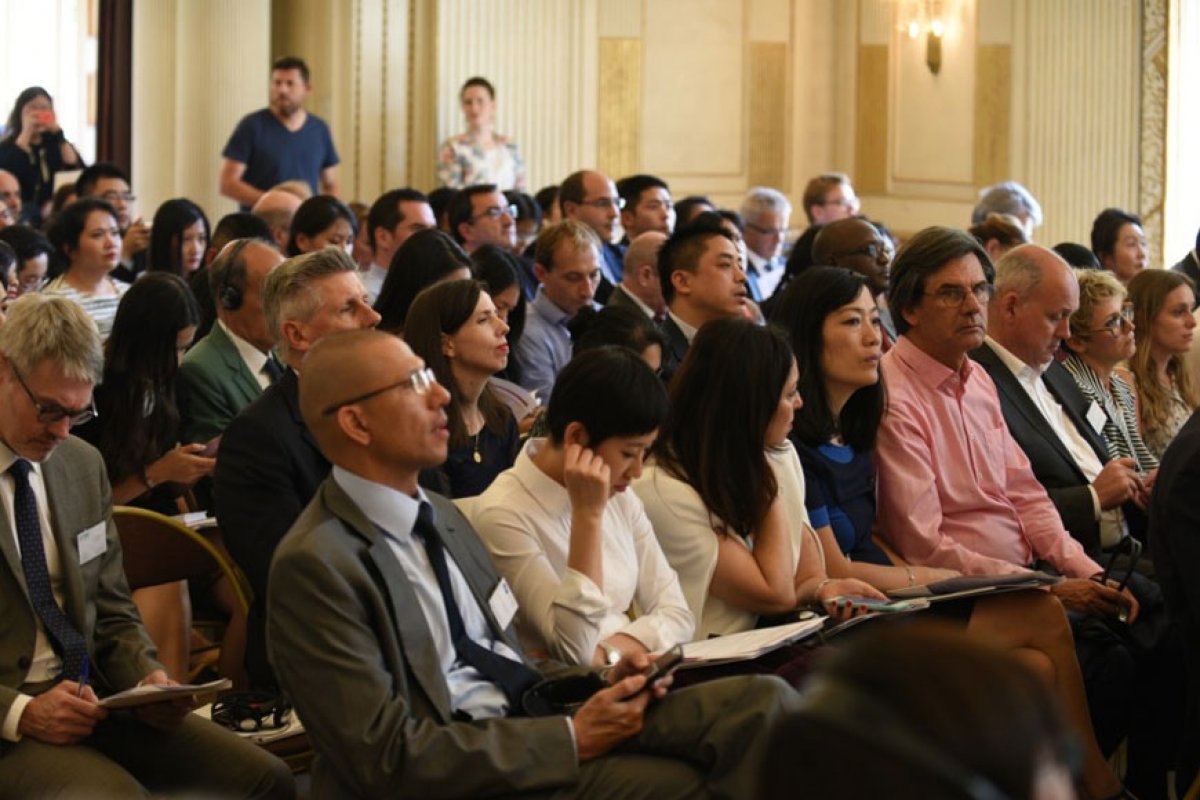 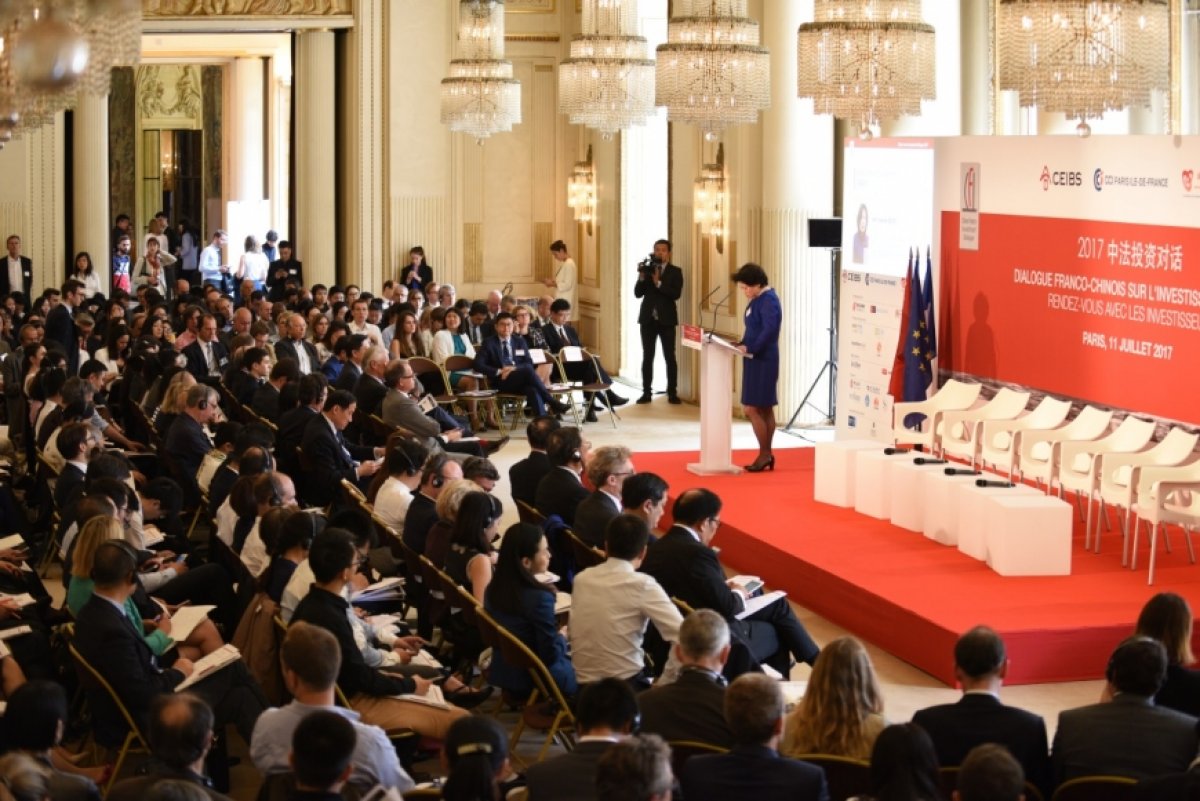 July 11, 2017. Paris – Former Prime Minister of France Jean-Pierre Raffarin today highlighted the similarities between China and France on issues such as globalisation and the need for collaboration at the international level. “If I am to say one thing – among many – on which both France and China have always had consensus, I would say it’s the multilateralism, the international cooperation, and a multipolar vision of the world,” he said. He was speaking to a gathering of French and Chinese business executives at CEIBS 3rd Europe Forum, held in Paris. The event focused on Sino-Franco investments, how France can benefit from China’s economic growth and how Chinese companies can leverage French investors’ resources to better compete both domestically and internationally.

A member of the CEIBS Advisory Board, Raffarin – viewed by many Chinese as a long-time friend of their country – also used his speech to highlight “the efforts made by CEIBS”, lauding the school as a “truly global platform” for business education and knowledge sharing, and its efforts at promoting a global vision.

Today’s event is one in a series of CEIBS forums being held in five major cities to foster greater understanding between China and Europe. One of the topics being extensively discussed is the China-led Belt & Road Initiative (BRI), and how important global collaboration will be to the project. “The fulfilment of the BRI requires not only continuous engagement of policy makers, financial institutions, but also solid public support from all the countries involved. An equally solid infrastructural ecosystem is also of critical importance to make sure the projects along the Belt and Road can be successfully implemented,” said Professor Yang Jiemian, Advisor to the BRI and President Emeritus of Shanghai Institutes of International Studies. Professor Yang, who is also a renowned expert on diplomacy, also spoke of the BRI – mooted as an engine of global economic development – as an opportunity to strengthen ties between China and France. It appears France recognises the value of this as well. Raffarin attended the Belt and Road Forum for International Cooperation in Beijing, this May, as French President Emmanuel Macron’s special envoy. “The BRI is the catalyst of a new set of international mechanisms for collaboration, such as the Asian Infrastructure Investment Bank (AIIB), for example. Since China and France are among the founding members, both countries have the chance to work more closely together in pushing ahead with further cooperation in the financial sector and more,” said Professor Yang. “The Initiative is breathing new life into Sino-Franco ties, allowing both countries to deepen their bilateral relations in a new global context.” He also shared his insights on the BRI’s strategic implications for Europe as a whole, noting that it is a potential source of new growth opportunities for countries as they transform technological advancement into productivity. According to data from the European Commission, the euro zone should see growth of 1.7% in 2017. China, meanwhile, is trying to rein in growth with GDP of about 6.5%.

Citing an old Chinese saying which can be loosely translated as “those who begin earlier and have strategic foresight can achieve more than others”, Professor Yang – an expert in geopolitics – expressed his high expectations of enhanced Sino-Franco ties within the framework of the BRI. “France was the first western developed country to set up diplomatic relations with China in 1964 – both countries are still enjoying the benefits of taking the first strategic and political step today,” he said. “They could surely seize the early opportunities brought by the BRI in the future.”

The BRI, based on the principle of achieving shared growth through discussion and collaboration and the joint efforts of countries along the new trade routes, is connecting major economies around the world. It has also given added impetus to efforts at ensuring that the benefits of globalisation – which has in the past been criticised for only advancing the needs of few – are fairly distributed. As China leads this fresh approach to globalisation, CEIBS – a joint venture between the Chinese government and European Union and a leading business school in Asia – is accelerating its own internationalisation. CEIBS has a strong presence across three continents from its five locations in Shanghai, Beijing, Shenzhen, Zurich and Accra in Ghana.

Here are a few highlights from the event:

In her welcome address, Counsellor of Economic and Commercial Affairs of the Chinese Embassy in France Gao Yuanyuan noted that, throughout 53 years of development, China and France have nurtured a comprehensive strategic partnership, which has brought gratifying results. She noted that China has become France’s biggest trade partner in Asia, while France is China’s fourth biggest partner in the EU. Today China’s BRI has brought new strategic opportunities to this partnership, she said, which was reflected in President Xi Jinping’s meeting with his French counterpart three days ahead of the forum, on July 8th, at the G20 Summit in Hamburg, Germany. She added that the newly elected French President Emmanuel Macron looks forward to deepening Sino-Franco cooperation within the framework of the BRI.

CEIBS President (China) Professor Li Mingjun welcomed the audience, and thanked event partners for their significant contribution to the forum. He expressed the hope that, through the event which brought together about 400 attendees from China and France, CEIBS – which is not only a leading business school, but also a successful Sino-European joint venture – can contribute to the development of Sino-Franco business cooperation.

Director-General of the Bank of China (France) and Chairman of the CCICF, Mr. Phan Nhay shared some facts about Sino-Franco cooperation, a relationship that grows stronger year on year. “We have seen a remarkable diversity and variation of Sino-Franco investments in recent years, in terms of industry, sector, and geography,” he said.

Club Med Global Chairman & CEO Henri Giscard d’Estaing and Fosun Group Senior Vice President, Jim Qian, who is also Fosun Tourism & Commercial Group President as well as Board Director of Club Med Holding (France) shared the success story of the Fosun-Club Med deal in the second session on “Sino-Franco Investment Case Studies”. When asked why Fosun has chosen to work with Club Med, Mr. Qian said that the changing lifestyle in China – led by the country’s rising middle class – had inspired the merger. Meanwhile, Mr. Giscard d’Estaing spoke of how much he valued his partner’s “China competence” in helping them enter the Chinese market. “Respect” was the word both business leaders stressed when explaining how both sides had worked together to accomplish the fusion of two very different working cultures.

The panel discussion “French Innovation – Key to Investments” had practical insights by business leaders from both sides. Sharing his views on how to successfully manage a French R&D centre for a Chinese parent company, Chairman of the Board of Huawei France, François Quentin explained that the key to success of overseas R&D centres is to organically integrate local know-how into the R&D process and product design of the entire group. He explained that Huawei’s French R&D centre is playing an active role in helping the company win in the future landscape of 5G technology.

Accompanied by CEIBS President (Europe) Professor Pedro Nueno, Diplomatic adviser to the French Prime Minister Emmanuel Lenain, Didier Kling, who is also President of the CCI Paris Île-de-France (CCIP), wrapped up the day’s event by encouraging business leaders from both countries to seize the opportunities provided by each other.

After the forum, CEIBS President (China) Professor Li Mingjun and President of the CCIP Didier Kling signed a Partnership Agreement between both organisations. The Agreement sets out a mechanism for future cooperation between the two sides, which will focus on reinforcing the bonds between the CEIBS community and CCIP member enterprises. The aim is to strengthen Sino-Franco business ties at the national level by promoting corporate-level projects and facilitating the entry of Chinese and French players into each other’s market. CEIBS, as a leading business school in Asia, will work with CCIP to deepen cooperation and collaboration in the area of business education.

In September, Warsaw and Munich will be the next locations for the 3rd CEIBS Europe Forum series of events being held this year. The final event will be in Zurich in October.

About China Europe International Business School (CEIBS)
CEIBS (www.ceibs.edu) is the leading international business school in mainland China. It is the only business school in Asia to have simultaneously made it to the Financial Times’ top 30 list of MBA, EMBA and Executive Education programmes. CEIBS’ world-class faculty – from both China and abroad – are experts in their fields. Since its launch in 1994, CEIBS has provided management education to over 130,000 executives both at home and abroad. CEIBS has campuses in Shanghai, Beijing, Zurich and Accra and a teaching centre in Shenzhen. It’s more than 19,000 alumni are spread across 80+ countries around the world.

Thanks to our event sponsors: