October 10, 2020. Shanghai – In May 2019, inbound MBA students Neil Flynn and Yunjian Jiang met for lunch in central Shanghai to discuss their plans to run for Finance & Investment Club. Both were keen to make an early impression on the cohort and put together a strong leadership campaign. With classmates already concerned about the financial accounting exam on the second day of the MBA, the two decided to host classes on Zoom to help the cohort to understand the basics. 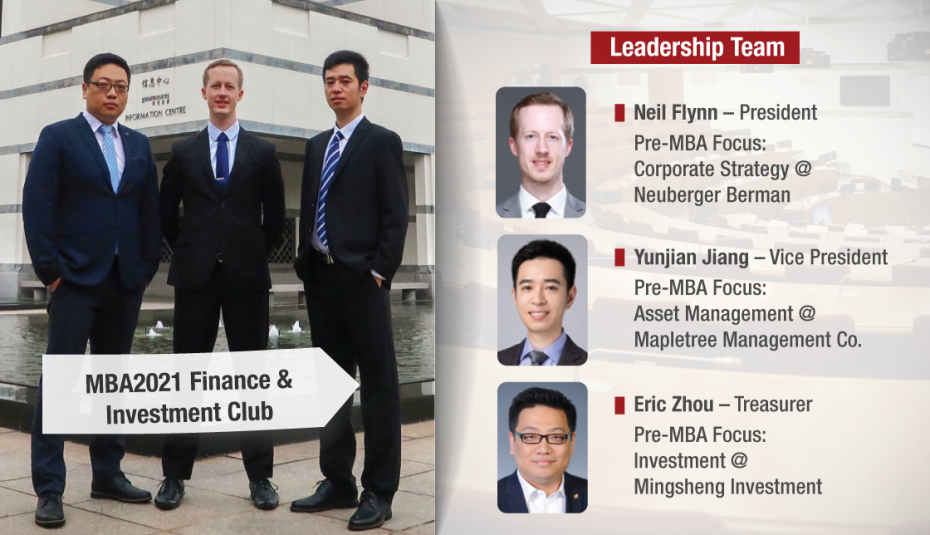 The first session was hosted by Neil in June – with three attendees in person and many more online – and the second was hosted by Neil and Yunjian in July, with the recordings of both made available to all. This cemented their reputation as the finance guys of the class. Paired with their early announcement of a club leadership campaign, the two were elected unopposed alongside Eric Zhou as Club Treasurer.

Their plan for the club was multi-faceted. The year began with Finance101 and exam prep classes, followed by finance executives visiting campus to talk to club members, and then the introduction of a global networking platform.

Hosting a microeconomics revision class with the Public Speaking Club

The biggest achievement of the club was the Global MBA Finance Club Network. Acknowledging that CEIBS has a small and China-centric cohort, Neil reached out to finance clubs at other schools to create a global network of MBA students interested in finance. This began in October, with the first networking event planned to coincide with the MBA Hong Kong career trek. However, after the trek had to be cancelled, the project shifted focus to build up the number of schools involved. This led to a worldwide network of MBA students who hosted joint events online and offered discounts for school conferences.

In early January, the leadership team wanted to expand in preparation for a broader range of events, so they recruited Xiaokun Li and Charatsri Tanaphuwanont onto the leadership team. Unfortunately, the COVID-19 pandemic limited the expected scope of what they could do.

However, in a surprise to no one, they made great contributions to the club and the school. In particular, they recently announced an online interview database, managed by Xiaokun and Charatsri, who reached out to other clubs and the Career Development Centre (CDC) to expand the project’s scope. This will provide significant benefits to future cohorts preparing for interviews in any industry.

Neil Flynn, Yunjian Jiang, Eric Zhou, Xiaokun Li and Charatsri Tanaphuwanont (L-R). Due to the lockdown of the Chinese border, a group photo was unfortunately made impossible.

With the leadership term coming to an end, the team has some advice for the incoming 2022 club leaders.

“I would recommend two things,” Neil says. “First, build upon what the previous leadership team has done. If every academic year is a restart for the club, then no progress is ever made. Second, and most importantly from a personal perspective, actively try to collaborate with other clubs. Some of my best connections from the MBA are fellow club leaders. It’s great to see how they work and you can learn lots about industries you’re unfamiliar with.”

Xiaokun echoes those thoughts. “Club leaders should try to come up with something that future batches can build upon.”

Reflecting on the Year

As the largest and one of the most active clubs on campus, the Finance and Investment Club received numerous awards, including being chosen as the second-best club on both occasions, behind the exceptional Healthcare Club. More importantly though, the team sees the experience as having being a unique way to test their managerial and leadership skills amongst peers during an unprecedented crisis.

“[As a club leader, you need to] be open-minded and embrace any challenges that come your way. You may not know it now, but in the future you will be able to connect the dots,” says Yunjian.

On a personal level, the team found the connections they built through the club have been incredibly valuable. Working closely with the Student Committee, Professor Frank Yu, other club leaders and other schools has fostered lifelong friendships that are one of the core takeaways from the MBA experience.