The MBA CFO on leaving China with Lacoste 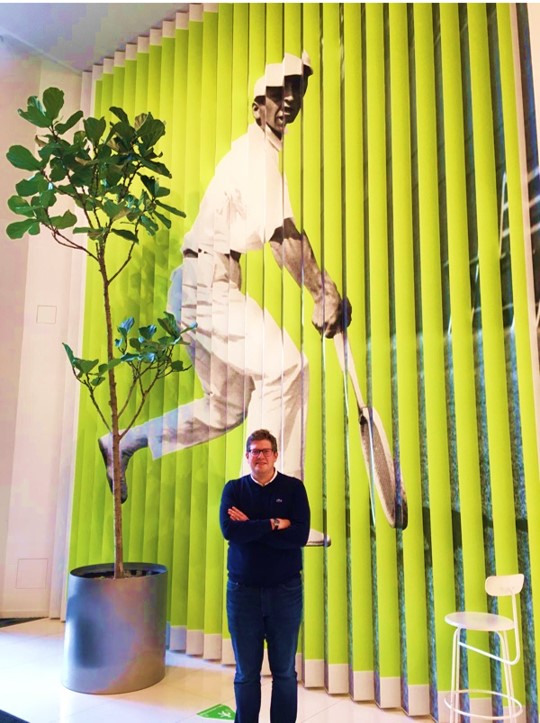 At a time when international travel remains difficult, daunting and easily disrupted, it’s a tough time to consider a lengthy stay abroad for work, academic study, or both. However, despite the difficulties involved, the benefits of doing so may be more tangible than ever, since opportunities for learning are always greatest when things are in flux.

We sat down with Hugo Mouroux, current CFO of EMEA Markets and Global Travel Retail for French global clothing brand Lacoste. Currently situated back in Paris at Lacoste HQ, Hugo previously spent over ten years in China and completed his MBA at CEIBS in 2013.

Ten years abroad is a long time for anyone, particularly a young professional who arrived in China less than a year after graduating from university. Considering this formative time in his life and career, Hugo says that the true value of living, working and studying abroad is not the initial ‘foot in the door’ of any specific company, it’s the broader intellectual and emotional competencies that you hone along the way.

In his current role, Hugo believes that his professional purpose can be broken down into two simple areas – ‘acknowledgement’ and ‘agreement’. The first part is to acknowledge the true state of the company’s performance across its various markets and territories.

“This is the basic task of the finance function today. Our job is to make sure that sure everyone – the teams, senior management, shareholders – has a very clear and transparent understanding of how we are performing. Without this, we cannot hope to achieve the second part.”

The second part, fostering ‘agreement’, is the more strategic of the two.

“With acknowledgement, we can say ‘Okay, we know what happened today.’ The next task is to say, ‘What do we want to happen tomorrow?’ Now it is the role of finance to map out potential scenarios, to present an accurate, clear model of potential markets, and how the company might enter those markets and thrive. Finance needs to be a platform for this kind of communication, to foster agreement on the company’s vision, and ensure that this vision is shared and understood by all departments and stakeholders.”

This is not a small or simple task. So, how did Hugo’s time in China help him secure his current position and succeed in building this kind of business vision once he was established there?

Adapting to circumstances – getting to grips with China

By his own admission, China was not Hugo’s first choice as a location for working abroad. However, when his original plans fell through, he quickly saw the attraction of living, working and eventually studying in Shanghai.

“I went in a little bit blind, I knew very little of China besides its cuisine! But the moment I arrived here, I saw and felt how everything was changing, almost daily. In fact, later on I went out of China for one month, and when I came back and I didn’t even recognise Shanghai! This, I thought, was a place to learn and adapt.”

After settling into Shanghai, Hugo met his wife, who is also French. At the time, both their career aspirations lay within Asia, at least for the near future. Accordingly, Hugo acted on a long-held ambition to undertake an MBA, quickly settling on CEIBS due to its growing reputation and, understandably, its geographic convenience.

“Since my wife and I knew we wanted to stay in Asia for some time, gaining an MBA from a business school like CEIBS was a good way to strengthen my global appeal but also gain a deeper understanding of China’s business culture and mentality. I also felt like I needed to expand my competencies beyond the finance function, that was a key motivator for me.”

Thinking bigger – Exploring the Value of an MBA

When considering his MBA studies, Hugo highlighted not just the practical skills and knowledge gained during the programme, but also the broader capabilities he gained during his time at CEIBS.

“I was better able to look outside the purely functional elements of my role and think and act more strategically. I could liaise and coordinate effectively with marketing, HR, commercial, any function at all. I gained a more complete understanding of how I fit into the wider organisation. This let me bring the biggest and best possible impact, using my own ideas and shaping them intelligently so that they were a useful fit for the company. This is what’s most valuable in a good MBA, you develop your own strategic thinking. Maybe you are not always right all the time, but you are aware of the bigger picture and can build your place within it.”

Hugo also keenly remembers the advice of one of his CEIBS professors, Professor Juan Antonio Fernandez, who told him that while having an MBA qualification may prove useful in getting his next job, its real value would only become apparent within the following 3-5 years. This is because the process would equip him to better observe and adapt to changing circumstances in the business world over time, and allow him to implement his own initiatives in response to any challenge that may arise.

Time and experience have proven the professor right, Hugo says, as he is now able to articulate his business vision and ideas so that they impact far beyond the finance function alone.

Transitioning to China, and back again

For current and future students at CEIBS, Hugo has two pieces of advice. The first concerns their transition into China, and the second regards the transition out again. On the subject of settling into China academically and professionally, Hugo advocates coming in with an open mind and a willingness to let your environment soak into your working practices.

“You don’t work in any one place in isolation. Working in Shanghai is definitively not like working in Paris, which is not like London, and so on. Wherever you are, you should connect with the place and the people. You should want to be a good bridge, to bring the best DNA from your own business cultural background, all in a positive, sensitive way. You can’t just focus purely on the function of your job and pretend it’s the same no matter where you are.”

This sound advice speaks to Hugo’s view on the wider value of both an MBA and the general experience of working and studying in a country and culture that is not your own. His feeling is that emotional and intellectual competencies are at least as valuable as the skills and knowledge you gain from these processes. Being tested in this way results, to his mind, in honing an individual’s ability to put everything they have learned into practice, in the most impactive manner possible.

Hugo’s parting piece of advice is to always remember that your time abroad will have been transformative. Given that you will leave a different – hopefully more capable and broadminded – professional than when you came, this should be reflected in the plan of action for your next step. When considering your transition out of China (or anywhere else) Hugo believes that it’s best to keep your ambitious spirit in mind, and aim for a position that lets you grow.

“When I came back to France, I came back to an executive position with the right level of freedom and challenge, similar to what I had experienced in China, this made things much easier for me. Ideally you should avoid going back to a very siloed, restrictive HQ role that doesn’t challenge you. Aim for something that will allow you to bring back the knowledge and experience you gained in China and put it to the best possible use. That is ostensibly what forward-thinking companies want from people with global experience, so you should have no difficulty clarifying that that’s want you want to go back to.”

For Hugo, his time spent in China remains a key influencing factor in his work, despite the fact that he focuses on EMEA (Europe, Middle East and Africa) markets for Lacoste. The ability to adapt to changing circumstances, realise and seize opportunities, and articulate a sound business vision is at the core of his current role. Having successfully transitioned to and from China, his example demonstrates that while qualifications are undeniably useful for many reasons, experiences are often worth more than the sum of their parts.