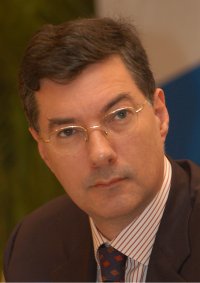 Mr. Declercq, a Belgian national, has close academic, professional and personal ties with China. He is a graduate and a Doctor from the Sinological Institute of Leiden University (Netherlands). Mr. Declercq is fluent in Dutch, Chinese, English, French and German.

Between 1985 and 1990, he held various positions including that of General Manager in the Sino-Belgian joint venture Xian-Janssen Pharmaceutical Ltd.

After a stint back at Leiden University teaching Chinese History, he returned to China in 1994 as General Manager of a joint venture established by the Cables Sector of Alcatel (subsequently restructured as Nexans). He became President of Nexans Greater China, based in Shanghai, in 2000.

In 2003, he was awarded the Magnolia Silver Award by the city of Shanghai for contributions to the city’s economic development.

Dominik Declercq is the Chief Representative of ACEA in China, based in Beijing, since October 2004.