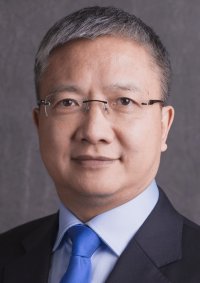 Dr. Hu Jianping is the founder and Chairman of Shenzhen Haylion Technologies Co., Ltd., founding member of China EV 100, and Chief Expert of the Urban Public Transport Expert Committee, China Road Transport Association. Dr. Hu received his bachelor’s degree and master’s degree from School of Transportation Engineering, Southwest Jiaotong University, and graduated from Shanghai Tongji University in 1992 with a Ph.D. degree in Road and Traffic Engineering. Later, he pursued postdoctoral research at the Transportation Center of Kansas University, furthered his study at Harvard's Kennedy School of Government, and became a visiting scholar of University of California, Berkeley.

Dr. Hu has over 30 years of experience in management, top level planning, policy consultation and business operations concerning the transportation industry. After graduating in 1992, he engaged in the transportation industry management for nearly 10 years at the Shenzhen Transportation Bureau, where he worked in the Planning and Construction Division and HR Division and later served as Assistant Director. After that, he assumed leadership positions in large SOEs such as Executive Vice General Manager of Shenzhen Metro Group and General Manager & Chairman of Shenzhen Bus.

During his term as Executive Vice General Manager of Shenzhen Metro between May 2001 and October 2015, he contributed to the planning and construction of Metro Line 1 and the preparation of its operations company until its official launch.

In 2004, he participated in the global recruitment of general managers by the four major SOEs under Shenzhen State-owned Assets Supervision and Administration Commission and was appointed General Manager of Shenzhen Bus Group as the top candidate. During his tenure, he set up China's first electric bus line and the world's largest new energy bus fleet, worked with BYD to jointly establish the world's first fully electric taxi company and served as its Chairman, formed Shenzhen Tong Technology Co., Ltd. and finished the preparation for Shenzhen Tong Co., Ltd. In 2010, he presided over a major technology project as a part of the National 863 Program, which focused on e-commerce and mobile payment applications.