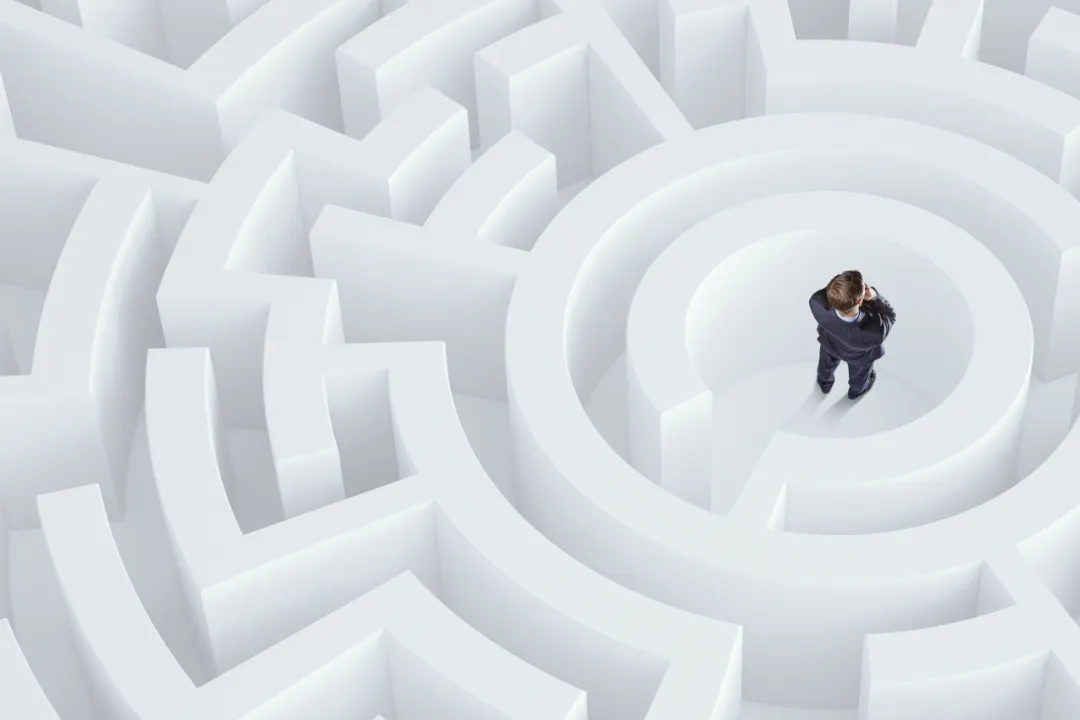 Generation after generation, many people spend their life working nine-to-five jobs, handling routine, repetitive tasks in a hierarchical reporting system. In addition, while value is created in this process, many companies still cling to bureaucracies established in the 1920s and, hence, lag behind when it comes to innovation. But, what are the origins of these bureaucracies and what are their pros and cons? And, how have our systems of corporate management evolved to meet the demands of the digital era?

The origins of bureaucracy

In 1911, Frederick Taylor’s The Principles of Scientific Management was published, marking the birth of business management. Then, in the 1920s, Alfred Sloan, Chairman of General Motors, created the organisational structure of decentralisation with central controls, providing an archetype for large corporations in the Industry 3.0 era.

A typical Sloan system consists of multiple business units (BUs) which can be divisions, branches or subsidiaries. Each BU serves a specific market and customer group, takes care of a specific part of the company’s business, operates independently in terms of team management and receives instructions directly from the CEO. Top management is responsible for allocating financial and human resources amongst BUs, and co-ordinating their production and operating activities so as to accomplish shared corporate goals. Moreover, each BU can be further divided by function to collectively form a tree-like bureaucratic organisation (see Fig. 1 below). 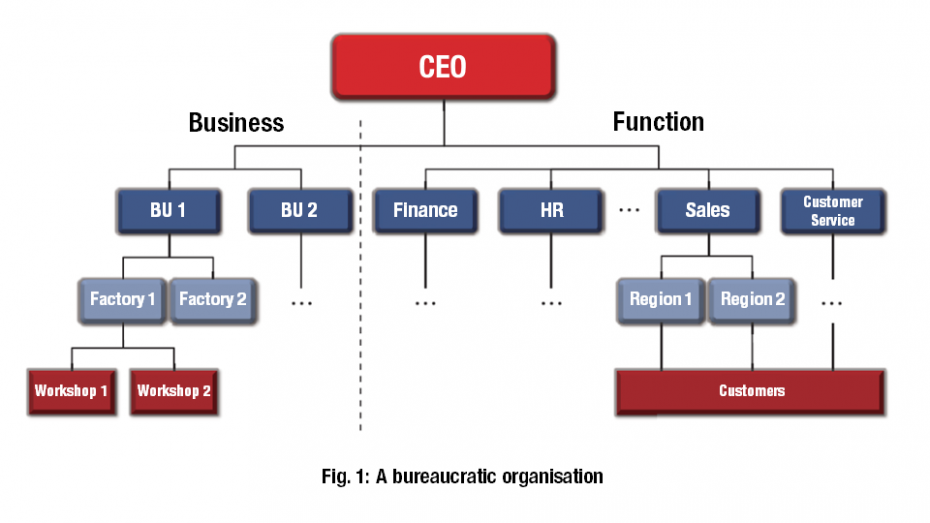 When the solution becomes a problem

The rise of bureaucratic organisations can be justified by the fact that since the ability of a single manager is limited, more management layers are needed as a company grows. Suppose the effective management span of one manager is seven people, two layers of management can cover 47 people and three layers 343 people. A company needs to put in place five layers to manage more than 10,000 people and seven layers in the case of 100,000 people.

Bureaucracy resolves the contradiction between the span of management and the scale of a company, but it also leads to a number of problems:

As more layers are created, it is increasingly difficult for a company’s headquarters to push its strategic plans and business requirements down the hierarchy without omissions, misunderstandings or delays. Conversely, additional management layers can give rise to more distorted information when it is collected in a bottom-up manner. At the same time, the horizontal flow of information across BUs is rarely seen. Instead, “deep wells” and “isolated islands” of information often come into being.

Bureaucracy is largely a product of the manufacturing economy. Since World War II, however, developed markets have undergone a transformation from the manufacturing economy to the service economy. The quality of products can be measured with objective indicators, but the measurement of service quality often depends on the subjective feelings of customers, which makes it hard to quantify and thus evaluate the performance of employees in this regard. Moreover, quantifiable measurements upheld by bureaucratic organisations are losing ground. Employees’ dedication and engagement – as opposed to their executive ability – have become the key to customer satisfaction and a company’s success.

Shortly after the Sloan system was developed, Peter Drucker management educator criticised the bureaucratic structure and foresaw the arrival of the “knowledge economy”. Drucker believed that bureaucratic organisations with pyramidal architecture of “command-and-control” should transform into “information organisations” composed of knowledge workers. He add that their functional divisions should be replaced by task-oriented teams in which people from different fields with different backgrounds, skills and knowledge, worked together to accomplish specific tasks, and where each individual was accountable for the overall success of the team.

Drucker further predicted that future organisations would adopt a flat structure with reduced management layers and everyone would be responsible for sharing information instead of simply following higher-level instructions. If we regard technological innovation as a key ingredient of the knowledge economy, we will admire Drucker’s foresight even more. Innovation is driven by initiatives and creativity of individuals. Bureaucracies, however, stifle innovation as people are often bound by strictly-defined responsibilities and limited resources at their disposal.

Bureaucracy has long been under fire, but no realistic alternatives were available until the emergence of digital and internet technologies.

Digitalisation greatly reduces information asymmetry. Moreover, smooth information transmission and collection broadens the span of effective management, allowing for reduced hierarchy. With a flat management system, companies can achieve what couldn’t have been imagined with bureaucracies.

Digital companies do not have a tree-like organisational structure. Instead, they introduce internal management platforms with various functional modules or processes. Both procurement and financial accounting can be completed via these platforms. Human resource management also gets streamlined as both personnel recruitment and performance appraisal can be conducted online, providing a reference for final decision making. Reduced management layers and simplified management functions enable a company to respond more rapidly to the market. Furthermore, grassroots business units in direct contact with customers are able to obtain necessary resources, produce and deliver products and services via these platforms in a timely manner.

Being responsive matters a lot in an innovation-driven economy. Companies need to be sensitive enough to capture market opportunities, design and trial/produce new products, maintain ongoing communication with prospective customers, and keep modifying and optimising their products. A bureaucratic system, however, could spoil the opportunity for an innovation to succeed due to hierarchical reporting, review and approval processes. So, with hierarchy reduced and functions simplified, what organisational structure might a company take? Fig. 2 below provides a conceptual illustration. 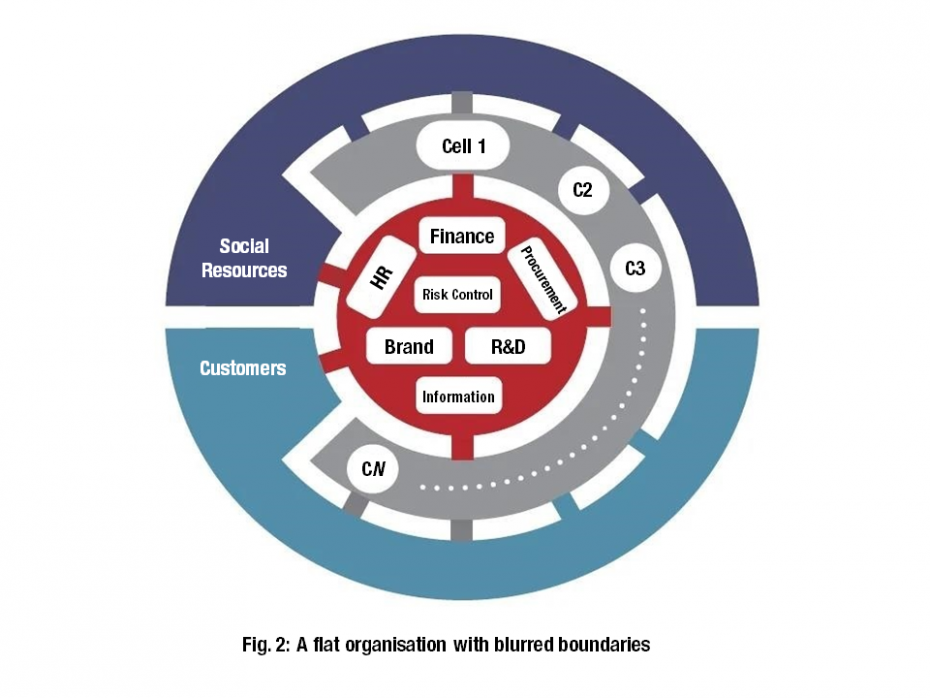 The rise of self-driven and adaptive organisations

The term “cell” vividly depicts the biological characteristics of a flat organisation, where “grassroots” becomes the basic business units where mechanistic combination is replaced by organic integration. Instead of strictly observing and executing higher-level instructions, these grassroot units can operate and evolve by themselves, being self-driven and adaptive at work.

In manufacturing, a “cell” is usually composed of five to seven people, led by a person with strong operational and organisational capabilities. We use the biological term “nucleus” to describe such leading figures. After bidding for and winning a project, the “nucleus” will enter into an internal contract with the company, which specifies the methods of risk and benefit sharing based on actual benefits. With the contract, the “nucleus” will then post a notice on the corporate management platform to recruit “cell” members internally, or recruit new staff from outside. In this way, a “cell” is often made up of members recruited both internally and externally.

At this point, you may question the similarities between what has just been described and Kyocera founder and former Japan Airlines CEO Kazuo Inamori’s Amoeba management system. In short, if the Amoeba system is about introducing the market mechanism and profit principles inside companies, the cell-like organisation structure in the digital age is about turning companies inside out. Traditionally, an Amoeba organisation simulates how the market operates, with its internal co-operative units playing the role of external customers; in contrast, “cells” face market competition and external customers directly, running like independent micro-companies to acquire customers and social resources on their own.

The management platform of the digital company is open to not only its “cells”, but also the outside world. There is both outside-in and inside-out market penetration. Although there is a “fence” separating the “cells” from the outside world, there are also multiple “channels” through which these “cells” can interact with markets, customers and other external resource owners independently. The “cells” can undertake external orders when they have spare capacity, or seek partnerships with third-party suppliers when they are short on internal resources. In short, corporate boundaries are becoming blurred.

The evolution of the management system: A long way to go

Digital companies have broken down the old bureaucracies. Employees are no longer boss-oriented, but customer-oriented, shifting from “affiliates” of production lines to value creators serving customers. As Inamori has said, every employee plays a major role.

This shift in the roles of employees is of paramount importance to economic development. As Drucker has highlighted, the prosperity of the knowledge economy depends on the initiatives and creativity of knowledge workers, which in turn requires companies to adopt more flexible management methods and market-oriented incentives to provide employees with sufficient space for personal development. At the same time, the Taylor system, which treats people as components of a machine with strictly defined frames of time, space and content of work, has become obsolete in the modern economy.

Like the “cells” of digital companies, each “amoeba” is an independent accounting unit, which gives rise to the problem of internal pricing. Since internal pricing involves multiple stakeholders, the objectivity and fairness of accounting methods have been questioned from time to time. As Inamori has put it, the Amoeba management system cannot be effectively implemented without the support of a powerful corporate culture and philosophy. In addition, a big-picture mind-set and a dedication to work should be promoted so as to mitigate conflicts of interest. That said, however, the individual-centred Amoeba system largely contradicts collectivist corporate culture and making a trade-off between them remains a thorny issue.

Digital companies are expected to break through these limitations because they have an objective basis for pricing. In a digital company, every operation leaves a trace in the system, making cost accounting objective, timely and accurate. The availability of cost data enables companies to calculate internal transfer prices based on unified gross margins. As a result, fair internal pricing is achieved, and friction between amoebas is alleviated.

According to Drucker, team structure does have its merits but should only be used as a supplement to functional structure, because a team “has a high degree of freedom, but lacks the self-discipline to take corresponding responsibilities”. Size is another concern and an excessively large team may lose merits such as flexibility.

These flaws cannot be eradicated by digital companies, but they have been greatly eased. Since all of a company’s business and management operations leave traces, and data collection and analysis can be carried out in real time, management can stay on top of the use of corporate resources and team performance, and communicate risk alerts in a timely manner. In this way, serious mistakes and losses can be avoided even if team members lack self-discipline. Meanwhile, management platforms allow companies to maintain small and agile teams even when their business expands. A company can enhance its supply capacity by increasing the number of teams, instead of adding layers and managers.

Finally, it should be noted that, in most cases, organisational change requires strong technical support. The “cell (team) + platform” organisational structure should be adopted only when a full-scale digitalisation is achieved with all business and functional processes offline having been integrated into the platform. Without sufficient technical support, a blind and hasty transformation into a “flat” or “borderless” organisation may turn out to be a disaster for companies as their existing systems may be disrupted and things get out of control. In these instances, a flat organisation can be less effective than a bureaucratic one.

Xu Xiaonian is an Honorary Professor of Finance and Economics at CEIBS. For more on his teaching and research interests, please visit his faculty profile here.