How should Chinese companies prepare for the post-COVID-19 era? 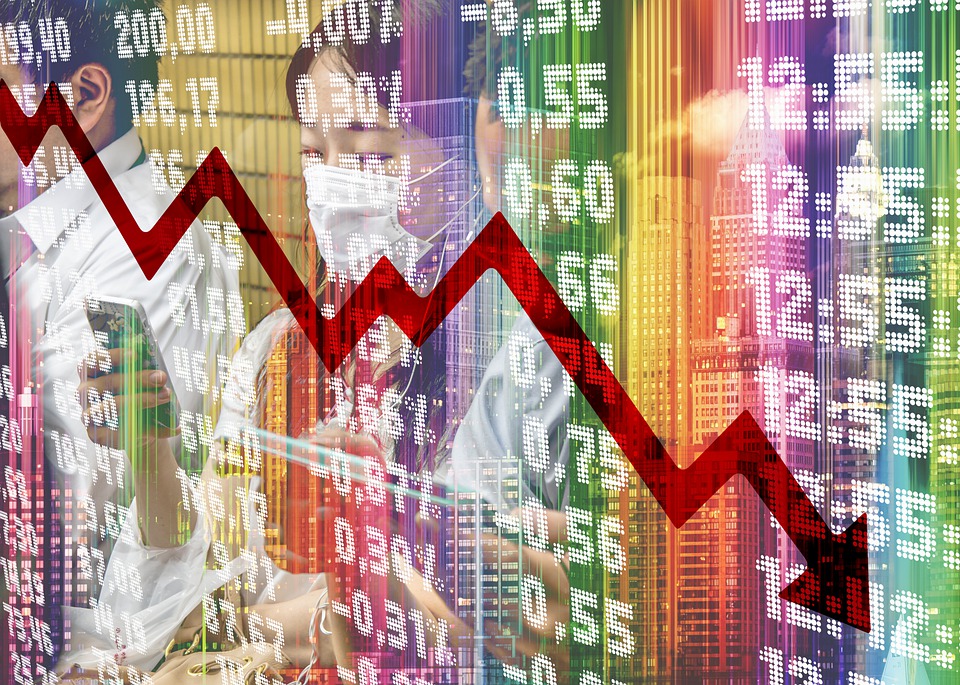 This year has been a dramatic roller-coaster ride, highlighted by the unexpected outbreak of COVID-19, global economic turmoil and a tumultuous political environment. In June, the International Monetary Fund (IMF) lowered its forecasts for global growth for 2020 to -4.9%. The downward revision suggests that both developed and emerging economies are tumbling into a recession, the worst since the Great Depression of the 1930s. What will happen to the world economic environment in the post-COVID-19 era? How should Chinese companies respond and seek growth?

In the first half of 2020, the COVID-19 outbreak caused tremendous loss of life and property. The impact of the pandemic has been keenly felt and has fuelled extensive discussions across various sectors. If we look at the current changes on a longer timescale, however, we find that the outbreak has not really changed the course of human society. On the contrary, it is like a booster accelerating existing processes and facilitating the emergence of new trends. These new trends will greatly influence the future trajectory of China’s economy and Chinese companies.

The Chinese economy has gone through several distinct stages of development during the last two decades.

At this stage, globalisation was universally embraced. After long, difficult and tortuous negotiations, China finally succeeded in acceding to the WTO in 2001. Riding the wave of globalisation, China enjoyed a strong growth spurt. In this period, many Chinese companies made great strides in expanding their operations.

In 2008, the global financial crisis broke out. Populist and anti-globalisation ideologies started to emerge in some countries. After the crisis, China’s economy entered a “new normal”, shifting from a high-speed, quantity-oriented growth model to one of medium-to-high-speed and quality-oriented growth. In response to China’s rapid rise, some Western countries, especially the US, began to develop a series of containment strategies.

In early 2018, the US launched a trade war on China, unilaterally announcing higher tariffs on some of its exports. China responded by introducing countermeasures. While sanctions and countermeasures were exchanged, the two sides held several rounds of trade negotiations, culminating in a “Phase One” trade deal in late 2019. During this period, China's export-oriented companies were hit hard.

After the conclusion of the “Phase One” trade deal between the US and China, it was widely expected that the two powers would hold subsequent rounds of trade negotiations, and that their feud would continue. But the unexpected outbreak of COVID-19 in China and the World changed the dynamics of many things. China’s economic activity came to a near standstill during this period, with first quarter GDP contracting by 6.8% year on year.

Earlier this year, CEIBS Professors Juan Fernandez, Zhou Dongsheng and myself, together with a team of research assistants, conducted an online survey to investigate the impact of the pandemic on business operations of companies in China. The results reveal that the pandemic hit the Chinese economy extremely hard in the first quarter. For many Chinese companies, “survival” became the primary objective at this stage.

The pandemic has been spreading rapidly across the world and has had a major impact on the global economy. In April, the International Monetary Fund (IMF) released its projections for real GDP growth for 2020 for the world (-3%), the US (-5.9%), the Eurozone (-7.5%), and China (1.2%).

However, the breadth and depth of the COVID-19 pandemic since then has exceeded the IMF’s April projections. In June, the IMF updated its forecasts, lowering its 2020 projection for the world (-4.9%), the US (-8.0%), the Eurozone (-10.2%), and China (1.0%). Based on these forecasts, the IMF concluded that both developed and emerging economies will fall into recession in 2020, the most serious one since the Great Depression in the 1930s.

When the pandemic subsides, China will face some profound and complicated changes in the international environment and Chinese enterprises will experience some fundamental shifts in terms of the business and competitive environment.

Outlook for the post-COVID-19 era

As mentioned earlier, after the 2008 global financial crisis, the West, led by the US, saw China as a serious threat and began to implement policies to contain China’s rise. The coronavirus outbreak will greatly increase the risk of confrontation escalating between China and the US in various economic, technological, financial and other spheres. Disputes and even conflicts are likely to become more frequent in the future, and China will face an unaccommodating international environment for a long time.

Ancient Greek historian Thucydides observed that rivalries between rising and ruling powers are inevitable, and that a shift in the balance of power between the rivals will lead to war. This theory is known as the “Thucydides Trap” and avoiding it requires a great deal of wisdom. China, on its part, has proposed to build “a community with a shared future for humanity”. With a focus on mutual benefits in international relations, this notion represents China’s solution to escaping the trap.

Moreover, major powers do not necessarily have to play a zero-sum game where one has to lose and the other has to win; rather, they can develop a new relationship of “co-operative competition” in order to avoid the Thucydides Trap.

In recent years, the term “regionalism” has gained wide currency. “Region” in this sense is not a geographical concept, but refers to co-operation amongst a group of countries based on their common interests. ASEAN, for example, is based on regionalism.

Indeed, in the aftermath of the 2008-2009 global financial crisis, a significant share of China’s exports of labour-intensive goods went to ASEAN countries. After the outbreak of the US-China trade dispute in 2018, Mexico crowded out some of China’s high value-added exports to the US. In the post-COVID-19 era, the global economy is likely to see accelerated regional restructuring.

So, how should countries respond to this trend? The answer is to develop the depth and size of the domestic market and remain open to the outside world.

In May, Chinese President Xi Jinping proposed for the first time at a meeting of the Politburo Standing Committee to “leverage the advantages of China’s super-large market and domestic demand potential to create a ‘dual circulation’ development pattern where domestic and foreign markets are mutually reinforcing, with the domestic market as the mainstay.” President Xi also called for “developing new advantages through participation in international co-operation and competition in the new era”. Then, in June, Vice Premier Liu He noted at the Lujiazui Forum in Shanghai that this new development pattern was taking shape.

It can be expected that China’s future economic development will be mainly driven by domestic demand, as the country remains open to the outside world. With that in mind, Chinese enterprises should explore opportunities in both the domestic and international markets. 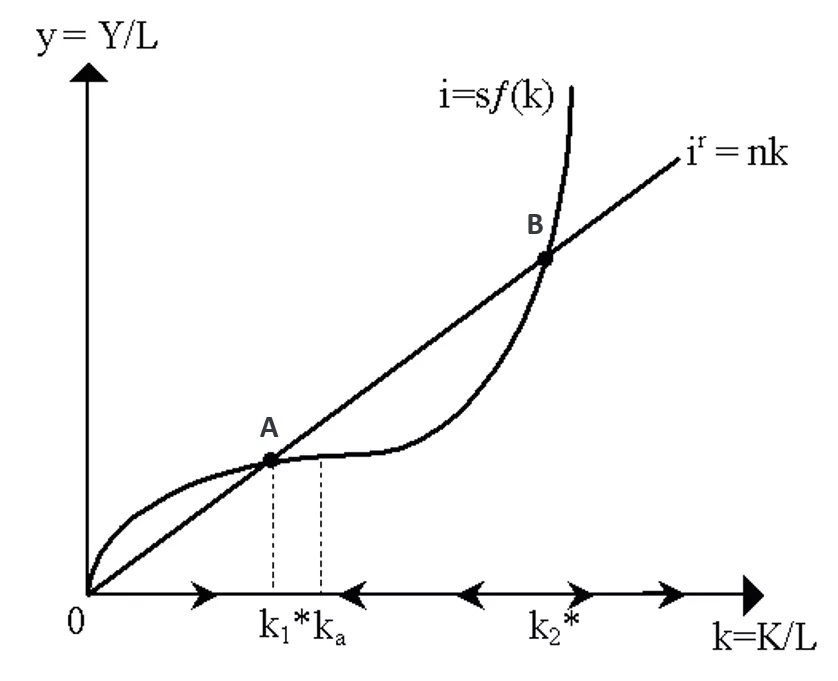 Take China as an example. Back in 1820, China (Qing Dynasty) had a GDP of $280 billion USD (in 2011 prices), accounting for one-third of the world’s economy. In the century that followed, China moved toward the low equilibrium at point A as shown in the figure above. The fundamental reason is that China failed to embark on a path towards modernisation during this period – a period known as the “century of humiliation”. On the back of 40 years of sustained high-speed economic growth, China’s GDP ranking jumped from 133rd (on par with Bangladesh, Malawi and Burundi) in 1978 to 77th (on par with Kazakhstan, Mexico and Turkey) in 2018. Success in building a modern economy through reform and opening up explains China’s stellar rise to the high point of the equilibrium at point B. There is no doubt that only by continuing reform and opening up can China overcome economic difficulties on the way forward and attain higher achievements.

China is expected to become a high-income country by 2030-2035 (with a GDP per capita of $12,500 USD). Against this backdrop, industrial upgrading will become a new trend in the Chinese economy. Businesses should look for opportunities emerging from this trend.

At the same time, we must not forget that there are still 600 million people in China with an average monthly income of only 1,000RMB. Narrowing the huge wealth and income gap, as well as the huge regional and urban-rural disparities, will be one of the major challenges that Chinese society will have to address in the future. From an economic development perspective, the existence of these gaps has led to a trend toward inter- and intra-industry differentiation. Companies should also seek business opportunities from this trend.

According to American economic historian Walt W. Rostow, a country’s economic growth occurs in five basic stages: the traditional society, the preconditions for take-off, the take-off, the drive to maturity, and the age of high mass-consumption. In 1978, when more than 80% of China’s population was engaged in agriculture, China was still in the traditional society stage. Between 1978 and 1998, China promoted economic development through reform and opening up and amassed a substantial amount of physical and human capital. Preconditions to take-off were ready. From 1992 to 2008, China’s economy grew at a high rate and took off. Since 2008, China’s economy has entered the “drive to maturity” stage, transitioning from extensive growth to quality-oriented intensive growth. From the perspective of consumption, China is currently in a consumption differentiation stage with the well-off trading up and the poor trading down. Businesses must appreciate the stage that the Chinese economy is at in order to formulate future development strategies.

In the post-COVID-19 era, what should enterprises do to cope with a more challenging and complicated international environment, as well as with industry and consumption differentiation? I believe that they need to raise their crisis awareness, build capacity to hedge against difficult times, and proactively seek opportunities ahead.

Crisis awareness: Companies need to realise and be prepared for the enormous difficulties and challenges that China’s economy is going to encounter for a long period of time in the future.

Capacity-building: In the short term, however, as the business environment in China and across the world is unlikely to improve significantly, they must build their own capacity to hedge against difficult times in order to survive.

Opportunity awareness: In the medium and long term, business opportunities will remain in China’s economy and need to be actively sought and exploited.

Here, awareness raising and capacity building are not only a temporary fix for the current difficulties, but should also become a long-term guideline for enterprises to cope with an uncertain future.

Xu Bin is Associate Dean (Research) and a Professor of Economics and Finance at CEIBS. The author thanks Danni Chen for research assistance. For more on Professor Xu’s teaching and research interests, please visit his faculty profile here.