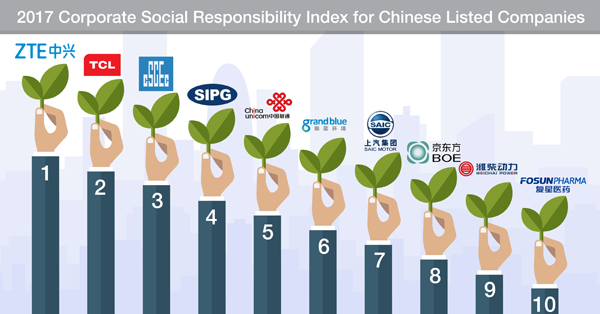 Corporate Social Responsibility is a bit like broccoli – everyone knows its health benefits, but it still takes willpower to choose it over a slice of chocolate cake. While most large companies in developed countries have incorporated CSR practices into their strategies, it’s not yet a staple for many Chinese companies – though it should be. Besides contributing to social well-being, good CSR practices signal good governance, which usually means a healthy balance sheet as well.

This is why the author created the first Corporate Social Responsibility Index for Chinese Listed Companies. It is the first index that ranks them based on their CSR efforts and the impact they’ve had. For companies, the Index is a bit like a fitness tracker for corporate benchmarking that helps nudge them into improving their CSR practices. It’s also an important tool for investors, who need both financial and nonfinancial information when analyzing and evaluating listed companies.

The Index evaluates three areas of CSR practices: Environment, Society and Governance, using a measurement matrix in line with established international standards. Western companies listed in the US and Europe regularly release reports on their CSR efforts, therefore our Chinese Index relies on data from digital CSR reports and annual reports published by A-share companies listed on the Shanghai and Shenzhen stock exchanges. This inaugural Index used the companies’ CSR reports for 2016 that they published between January and May 2017.

The entire 2017 China CSR Index comprises 50 companies – yet at the end of 2016 there were a combined total of 3,052 A-share companies listed on the Shanghai and Shenzhen stock exchanges. So why did so few companies make the Index? For starters, only a quarter of all A-share companies disclosed their CSR reports last year; among those who did, many were not that detailed and lacked the data we required. CSR is about more than just donating to charity and trying to conserve natural resources. According to international best practices, company CSR reports should also include disclosures of company operation and management, product quality and innovation, responsibility to employees, and diversity, all of which our Index analyzes.

Since the Chinese listed companies have such an overall low rate of disclosure, when launching the Index, the authors thought it would be better to start by publishing the top 50. This takes Chinese culture into consideration – if a best-to-last ranking of the 792 companies who disclosed at least some information was published, the ones at the bottom would lose face. Instead of motivating them to improve their CSR practices, it would make them more likely to stop reporting their information altogether in order to avoid another low ranking. We want to encourage disclosure, not stifle it, and we hope companies will strive to be included on the Index.

The industry with the highest level of disclosure was finance – it was found that 87% of the listed companies in this sector published an annual CSR report in 2016. This can be explained by the fact that financial companies are subject to higher regulatory standards, and are more conscious of the need to maintain their reputations. Across all industries, state-owned enterprises (SOEs) had the highest rate of disclosure – of the 792 companies that published an annual CSR report in 2016, 60.10% were SOEs; 34.72% were private listed companies and 4.29% were Chinese-foreign joint ventures (0.88% did not fall into one of those three categories).

Looking at the data from the Chinese companies who released CSR reports in 2016, it shows some areas where most companies could use some improvement. One is Product Quality and Innovation, which includes patents, R&D expenditures and proportion of R&D personnel. The companies we had data for filed an average of 108.31 patents in 2016. It

should be noted that ZTE, which topped the author’s CSR Index, filed 4,123 international patent applications in 2016 according to the World Intellectual Property Organization (WIPO), the most of any company worldwide. The average R&D expenditure of these Chinese companies was RMB 479 million. Compare that to figures from Germany’s Federal Ministry of Education and Research that show that German private sector companies invested a total of almost 61 billion euros in R&D in 2015.

Diversity is another area where Chinese companies fall short of international standards. According to the 2016 CSR reports we reviewed, 60.98% of those Chinese companies have females on their executive teams, but there was less than one female executive per company on average. Research underscores the many ways that companies benefit
from diversity. An example from a recent study the author of this article co-authored examined the impact of gender difference on corporate fraud in China between 2001 and 2010. The results showed that firms with a high proportion of female directors on their board and led by female chairpersons commit less fraud.

Then there is China’s philanthropy gap. The ranks of China’s billionaires grew by 101 in 2016, more than any other country, according to a PWC/UBS report, which noted that there were totally 318 billionaires in China that year. Yet China ranks 138th out of 145 countries on the 2017 CAF World Giving Index which measures the percentage of a
population that engages in charitable giving and volunteer work, as well as how willing people are to help strangers.

Looking at the Social Contributions and Charity that was reported by Chinese companies in 2016 CSR reports, 760 companies made an average donation of RMB 5.68 million, but the median amount was only RMB 415,000. While 115 companies donated over RMB 5 million, over half of the companies donated less than RMB 500,000. There are several reasons for this philanthropy gap. Most of the wealthy entrepreneurs in China are still young compared to their western counterparts; they are in their forties and fifties and have not yet begun thinking about philanthropic activities. There are not yet Chinese equivalents of the Bertelsmann Foundation or the Robert Bosch Foundation that have been in place for generations. China has lacked a regulatory infrastructure to support private philanthropy, as well as the transparency and good governance standards common in developed countries. This has led to several high profile scandals that made the public feel local charities were not trustworthy.

But China’s relatively low level of philanthropy isn’t just due to its developing economy status. Myanmar holds the top spot on the 2017 CAF World Giving Index, and Sierra Leone in Africa is number 12. There is a big difference in the attitudes of Chinese and western entrepreneurs towards wealth. Most Chinese entrepreneurs still regard a charity in the same way they would a for-profit enterprise – they want to get a return on their investment and see a tangible benefit for their business if they make a donation. Many in second- and third-tier cities consider a donation to be a tool for establishing political connections that should lead to some kind of deal or preferential treatment in the future.

However, despite these challenges, we are beginning to see a change in attitudes towards philanthropy among Chinese entrepreneurs. A notable example is Alibaba founder Jack Ma. Just before his company’s 2014 IPO he announced the establishment of two charitable trusts that are being funded by share options in the US-listed ecommerce giant. In December 2017, Ma announced an RMB 10 billion Alibaba Poverty Relief Fund that would be used to promote “positive social change and improve the lives of people in China”, according to a company press release.

Based on the data collected for the Index from the Chinese listed companies, the author also observed some positive trends in overall CSR practices. In 2006, only 19 Chinese listed companies released an annual CSR report, last year 792 did. The amount of information contained in the reports is growing. Though most are still less than ten pages, the proportion of reports longer than 20 pages has been gradually increasing.

It’s our hope that by showcasing the companies who are leaders in practicing good CSR, our Corporate Social Responsibility Index for Chinese Listed Companies will motivate more entrepreneurs and enterprises to do so as well. Good CSR practices are essential for good governance. Disclosing this information is good for a company’s image with both investors and customers, and it will improve resource allocation and social welfare across China, but ultimately it is the Chinese companies themselves who have the most to gain.

This article was first published by The German Ticker.