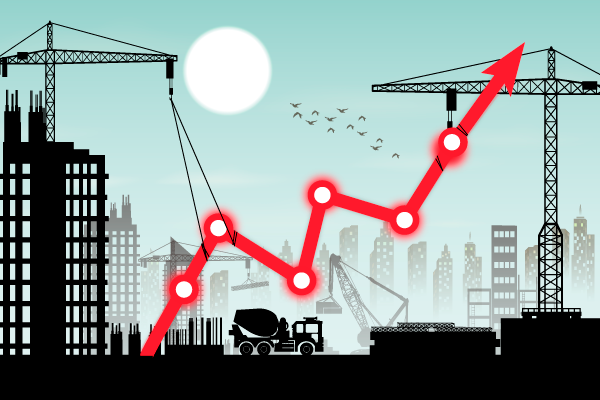 China has embraced a new round of property-price growth since 2015. According to the National Bureau of Statistics (NBS), China's 70-city new home price index rose for 37 consecutive months from May 2015 to May 2018. During this period, new commodity housing prices (all housing prices below refer to new commodity housing prices) increased by a whopping 20.4% nationwide. Meanwhile, policymakers further stepped up property tightening, with new tightening measures introduced. There are six ways in which this round of price increases and tightening measures is different from previous measures. CEIBS Professor Sheng Songcheng, who is also Counsellor of Shanghai Municipal People’s Government and Counsellor at the People's Bank of China (PBoC), explains with his co-authors and looks at the impact of China’s skyrocketing real estate prices.

I. Six things to note about of this round of property price increases & tightening measures

First, Chinese housing prices have grown significantly over a sustained period of time. A look at the 70-city newly constructed residential property index released by the NBS shows that since the global financial crisis in 2008, China’s property market has seen two rounds of increases, one between March 2009 and September 2011 (31 months), and the other between June 2012 and April 2014 (23 months). The current round of increases began in May 2015. As of May 2018, the 70-city newly constructed residential property index remained in positive territory on a month-on-month basis. In the meantime, property prices rose for more than three years, the longest streak since 2008.

Second, for the first time ever, tier 3 and tier 4 cities have experienced substantial house price growth. Since China’s property market recovered from the 2008 global financial crisis, commercial housing prices in tier 3 and 4 cities have held steady, up only 1.5% in 2015 from early 2011, despite increases between June 2012 and April 2014. That said, housing prices in tier 3 cities have continued to rise since 2016. Among 70 large and medium-sized cities tracked by the NBS, tier 3 cities saw home prices jump by 15.9% from January 2016 to May 2018. The average selling price (ASP) for newly built commodity houses in 60 tier 3 and 4 cities monitored by Tospur increased by 28.1% to RMB8,976 per square metre in May 2018 from RMB7,008 per square metre in January 2016, according to CREIS data.

Third, the housing market in tier 3 and 4 cities has become hotter than in tier 1 and 2 cities. As the NBS’ 70-city home price index shows, tier 3 cities have sustained home price growth of about 6-7% year-on-year since the second half of 2017, tier 2 cities have maintained year-on-year growth of around 4%, and tier 1 cities have registered a year-on-year growth of close to zero. This is reflected earlier in the sequential data. In October 2016, tier 3 cities witnessed faster month-on-month price growth than tier 1 and 2 cities. In terms of house price growth, prices in tier 1, tier 2 and tier 3 cities increased by 0.5%, 6.2% and 9.3%, respectively, between January 2017 and May 2018. In the wake of strict property price controls in tier 1 and 2 cities, the housing market got hotter in tier 3 and 4 cities, an indication of capital inflows.

Fifth, policymakers have ramped up tightening measures to unprecedented levels. Shenzhen and Shanghai have begun to step up property-tightening measures since March 2016. In October 2016, 21 cities, including Beijing, tightened property cooling measures. Since 2017, these measures have been further upgraded, as evidenced by the continued ramp-up in restrictions on housing purchases/lending/prices/sales and commercial property. By Tospur’s calculations, more than 60 cities (including counties) have rolled out property tightening measures such as home purchase and sales restrictions since 2017. Tier 1 cities have experienced an unprecedented intensity of tightening measures. For instance, Shanghai has raised the threshold for non-local homebuyers, demanding proof of at least five years of taxation or social insurance payment, up from two years. Meanwhile, Shanghai has hiked the down payment ratio for first and second home purchases from 30% and 40% to 35% and 50% (70% for non-ordinary housing), respectively. Some tier 3 and 4 cities have also introduced tightening measures. Non-local buyers in Zhangjiakou (in Hebei province) and Ganzhou (in Jiangxi province) are limited to one home.

Another reflection of upgraded tightening measures is the adoption of various means, including land, rental housing and finance, for cooling the property market. The 19th Party Congress called for “speeding up the establishment of a housing system with multiple types of suppliers, multiple channels for housing support, and encouragement for both renting and purchase”. China launched a pilot programme in 11 cities, including Beijing, Shanghai, Shenyang and Nanjing, to build rental housing on collective construction land. The Ministry of Housing and Urban-Rural Development and several other ministries and commissions issued a notice in July 2017 to accelerate the development of the housing rental market, with pilot programmes implemented to grant equal rights to home renters and buyers in 12 cities such as Beijing and Guangzhou. In the financial sector, efforts were made to clamp down on the flow of funds to the real estate market. In its guiding opinions dated April 2017, the China Banking Regulatory Commission (CBRC) called for implementing classified controls over property credit, cracking down on loans for down payment, bringing property-related lending under regulatory oversight, and preventing funds from illegally entering the property market.

What’s worse, due to the lack of expectation management, the implementation of some tightening measures has added to positive expectations. The imposition of home price restrictions has caused prices of some new homes to be lower than those of second homes, creating arbitrate opportunities, fuelling market speculation, disrupting supply and demand, and encouraging a partial overheating of the market. Reports of property development projects being sold out upon their launch and tens of thousands of people lining up for a lottery to buy new homes have strengthened public awareness about the boom in the property market, misleading household home purchase decisions and reinforcing the public’s positive expectations.

In addition, inadequate supervision and punishment of acts – such as price rigging – that disturb the order of the property market has made it hard to eliminate speculation and reverse expectations for higher home prices, because the benefits of market manipulation outweigh the punishments.

II. Three reasons for this round of property price increases & tightening measures

The property tightening measures were relaxed in the second half of 2014, when the economy continued to trend downward, and government debt and property developers’ funding problems became acute.

First, the domestic economy has faced greater downward pressure. GDP expanded by 7.1% and 7.2% in the third and fourth quarters of 2014, respectively, raising the spectre of growth falling below 7%. The property sector’s value added indicator grew by 1.3% year-on-year in the third quarter of 2014, down from 9.8% year-on-year in the first quarter of 2013.

III. Four impacts from this round of property price increases & tightening measures

The current round of home price rises that began in 2015 has had a negative impact on the economy and society.

First, the high-priced housing problem has further deteriorated. Property investment, output and prices have continued to rise since the marketisation of housing in 1998. According to the NBS, the quarterly cumulative year-on-year growth rate of value added of the property sector has remained in positive territory since 1998. The monthly year-on-year growth rate of property development investment has never turned negative since records of the data began being kept in February 1999. Housing prices have shown an upward trend, and this trend has remained intact despite short-term volatility. Therefore, the real estate sector remains on an uptick and has yet to go through recession/depression to form a complete cycle. The current round of price increases has further pushed up home prices.

Second, a short-term boost from real estate has proved detrimental to the long-term healthy development of the economy. High housing prices imply a heavier home-buying burden on residents, exerting a crowding-out effect on household consumption. High returns lead to the concentration of fund inflows into the property sector, which creates a crowding-out effect on real economy companies by making financing hard for them. The current property price increases are across the board with significant implications for the real economy, as the crowding out effect spreads from a few major cities to the entire country.

Third, big home price gains in tier 3 and 4 cities have exacerbated the build-up of risks. The heating up of the property market will attract a new round of property investment, turning “destocking” to “restocking”. However, an exodus of population from tier 3 and 4 cities increases the risk of excessive housing supply. Rapid home price increases in tier 3 and 4 cities push the cost of living higher, translating to higher costs of labour for businesses. Land prices rise in tandem with home prices, meaning higher land-use costs for businesses. These undermine the cost competitiveness of tier 3 and 4 cities, hindering the process of industrialisation and urbanisation and even leading to a “hollowing out” of cities. “Restocking” comes at the sacrifice of non-renewable, arable land, threatening arable land security in China.

Fourth, the shift in the public’s behaviour patterns has posed challenges to tightening the property market. On one hand, people’s expectations for higher housing prices have risen amid big price jumps. Home prices have risen for 20 consecutive years since the marketisation of housing in 1998. There is a deep-rooted belief that house prices always rise. This problem has been exacerbated by the lack of market expectation management in this round of property price increases and tightening measures. Helped by strong bullish expectations for property, robust demand for residential investment further drives up housing prices, making house price growth self-fulfilling. Furthermore, possible resistance on the part of market participants will present challenges for property tightening. On the other hand, the interests of home owners are directly linked to the increases in housing prices. These people are happy to see home prices go up and reluctant to see prices drop, producing a ratchet effect of continually increasing prices and adding to headwinds for property tightening.

Sheng Songcheng is a Counsellor of Shanghai Municipal People’s Government, Counsellor at the People's Bank of China (PBoC), a former Director General of the Financial Survey and Statistics Department at the PBoC, Adjunct Professor of Economics and Finance at CEIBS, and Executive Deputy Director of the CEIBS Lujiazui Institute of International Finance.

Song Hongwei and Li Shoujun are both researchers at Tospur Real Estate Consulting.

This article represents the authors’ views and not necessarily those of their respective employers.