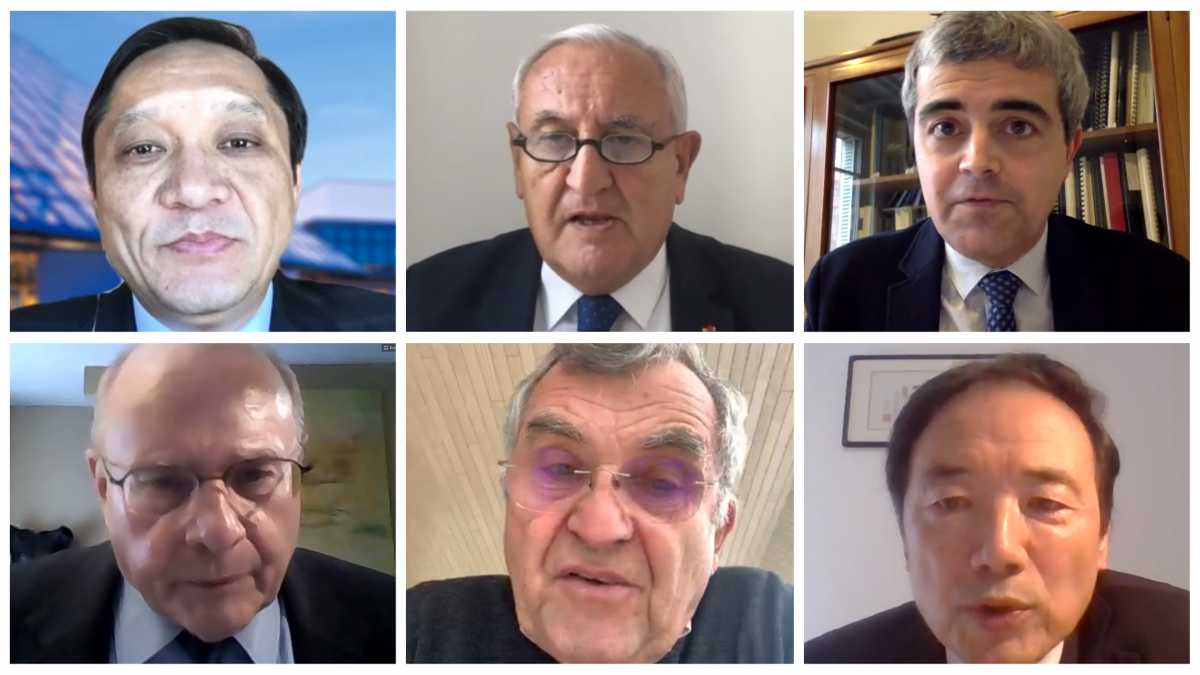 November 9, 2020. Paris/Zurich – CEIBS, the Prospective and Innovation Foundation (FPI) and the Charles de Gaulle Foundation (FCG) recently co-hosted a special webinar on The Leadership of General Charles de Gaulle. The event was hosted in part to mark the 50th anniversary of the death of the former French President.

During the webinar, Former Prime Minister of France, CEIBS Distinguished Professor and FPI President Jean-Pierre Raffarin and CEIBS Vice President and Dean Ding Yuan were joined by Charles de Gaulle Foundation Director of Studies Professor Frédéric Fogacci, former President of France Georges Pompidou’s son Professor Alain Pompidou and former Essilor Chairman Xavier Fontanet for an exploration of the spirit and implementation of leadership in the context of de Gaulle’s life. The event was moderated by Senior Advisor to the Dean's Office at CEIBS Dr. Xu Bo.

In addition to his role as a Distinguished Professor, Prof. Raffarin has served as the Charles de Gaulle Chair in Global Leadership at CEIBS since 2018, when the chair was signed into existence as part of a three-year agreement between CEIBS and the FCG to carry out teaching and research on the meaning of global leadership and the development of relevant leadership skills.

In opening, Prof. Raffarin noted that leadership is a form of exercising power found throughout the world in all human activities. Nevertheless, he stated that it is defined differently in at least three major cultures.

“In American culture, leadership is of construction, of manufacturing – everything here can be learned. In Europe, it is rather a leadership of talent, character and destiny,” Prof. Raffarin said. “And, then, in Asia, it is more about strategic leadership – leadership which does not necessarily expose the leader.”

Drawing from de Gaulle’s own writings, Prof. Raffin then expanded on the European concept of ‘leadership of character’, describing it as something essential and important for society, while adding that a leader is a moral force who possesses character, circumstance, and an awareness of his/her destiny, as well as the spirit of enterprise.

“What is strong in this leadership of character is that [a leader] thinks of something and then executes it. [At the same time,] to govern is not to take care of everything – it is to be in charge of the essential, of what is important for a country and for its future,” Prof. Raffarin explained, adding, “This is why General de Gaulle embodies magnificently this European leadership. It is leadership that comes from consciousness.”

Citing CEIBS as an example of a co-operative leadership between China and Europe, Prof. Ding noted that despite having only been founded in 1994, the school has already climbed to the top of the international rankings and serve as an important bridge between China, Europe and the rest of the world.

“Behind this miracle, there was strong conviction and foresight on the part of European and Chinese leadership 26 years ago. We conducted a lot of strategic analysis and we showed that the school was really founded in the right place, at the right time, with the right structure,” Prof. Ding said. “But all that required leadership, a long-term perspective from both partners and, of course, a belief in the opening up of China [and] the potential of the Chinese economy.”

He added that with more than 70 faculty – including those from the US, Asia and Europe – CEIBS is well-positioned to offer multiple perspectives and techniques for learning about leadership.

“With this team together, we have managed to build a much broader perspective that touches both the technical learning aspects of leadership, the character and talent aspects, but also these strategic aspects found in China,” Prof. Ding said. “As a result, we have attracted not only Chinese students, but also students from all over the world to learn leadership in its much broader conception.”

On the question of how one can grow as a leader, Prof. Raffarin stated that while “it is the battles that make the general”, the right surroundings in which to develop confidence and analytical skills is just as important.

“A good leader, in terms of training, must, on one hand, first be given a general culture,” he said. “On the other hand, [a leader] must have the ability to understand others, to know how to listen as much as to speak, and to know how to ensure that he or she integrates the concern of others [and earns the] confidence of others.”

Prof. Ding also offered some examples of the fundamental elements of leadership – common in politics, business and management – taught at CEIBS.

“[Leadership] is very much linked with someone’s talent or character, but it can be learned. It involves having a capacity for analysis of complex phenomena and finding the essential,” Prof. Ding said. “But afterwards, in the execution, it is not to go into detail, but being able to motivate others and to be surrounded by a stable and inspired team.”

During the webinar, speaking on behalf of the FCG, Prof. Fogacci further emphasised the importance of the Charles de Gaulle Chair in Global Leadership at CEIBS and offered his theoretical perspective on the value of Charles de Gaulle’s leadership mechanics.

Finally, as the only entrepreneur on the panel, Mr. Fontanet explained the important role of Charles de Gaulle’s leadership in the rapid development of Essilor in the Chinese market.