Start-ups hold more power in partnerships than you think 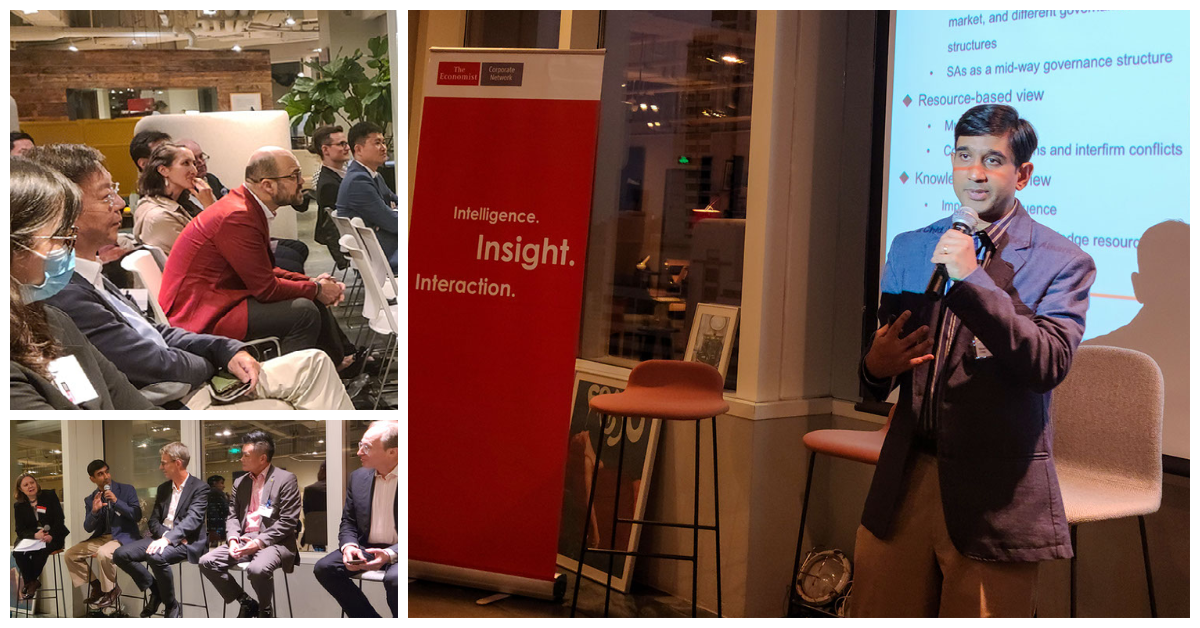 Prof. Shameen made the remarks as a keynote speaker at an event hosted by the Economist Corporate Network entitled “Collaboration versus Distrust”, during he discussed his extensive research on the topic of business partnerships between organizations of differing sizes. He was joined by Jonathan Woetzel, Senior Partner at McKinsey & Company, with whom he recently co-authored an article for Harvard Business Review entitled, “Three Lessons from Chinese Firms on Effective Collaboration”. Joseph Chu, Chief Digital Officer at Deloitte China, and Clas Neumann, Senior Vice President, Head of Global SAP Labs Network, also featured on the panel hosted by the Economist’s Mary Boyd.

The discussion expanded upon the basic premise of the article – that, despite a negative focus from some western sources on China as a systemic rival in IT, there have been some pioneering models for effective collaboration created in China which offer useful lessons for global executives and which can create growth in the digital realm and beyond.

Prof. Shameen explained that, just as in many other spheres, trust has always been an issue in business when it comes to collaboration between different entities, but that the benefits of working together create momentum to find a way around such issues.

“There are a number of assumptions which shape collaboration – the fundamental assumption being that partners can take advantage of you,” said Prof. Shameen, adding, “But there is also an assumption based on resources – one where companies have realised that resources shared with others can create value which couldn’t be created other ways. Hence, knowledge becomes a kind of resource.”

Ways of understanding business collaboration have expanded from the economic to sociological fields, explained Prof. Shameen, and have led organizations to shift their focus somewhat to consider the nature of human interaction.

“Social capital – the idea you have resources which are embedded in relationships – has led to resources not only being thought of as inside an organization, but also outside its boundaries,” said Prof Shameen, adding, “This has resulted in them being seen not so much as resources, but as something that must be actively managed like good will and trust – this kind of perspective emphasizes you actively think of resources outside the organizations.”

Many of the questions Prof. Shameen fielded from the audience focused on practical concerns when partnering with start-ups. He explained that resource dependence – the idea that when a firm starts dealing with another company they may actually become dependent on them – was a common fear.

“Social capital has a positive frame to it and it is seen as something good to have, but resource dependence highlighted the dark side of this – the idea you could become dependent on a partner,” explained Prof Shameen, adding, “One way of dealing with this is to absorb the partner, but this also highlights the fact that you can have huge power asymmetry, which leads companies to jostle with each other for control.”

Technology has profoundly impacted not only the nature of communication itself, but also opportunities for companies to work together. Much academic research on international business twenty years ago, for example, was focused on joint-ventures, said Prof. Shameen, and it stemmed from a feeling that when companies went into other markets, they felt they should get into a partnership.

“In the 1990s, strategic alliances in the business school world spoke of marriages, but I have a bit of a problem with this because the assumption of permanence is not necessarily there in inter-organizational relationships,” he said, adding, “There is a lot of interest in how western companies came into China and tried to teach the joint-venture partner in China about new technologies, or how to manage the governance of partnerships, and many lessons have been learned during this time which have global impact.”

Prof. Shameen continued that he believes that development has come full circle and now China is contributing very important lessons and innovations in partnership development. Some very small start-ups use huge global companies as somewhere they can learn the ropes as very much the junior partner before developing somewhat and moving on more comprehensive and involved relationships with big Chinese companies.

“Entrepreneurs have explained it to me as, ‘When we are really tiny we tiny we prefer to work with the Microsofts or SAPs of the world, and then when we get more confident, we want to talk to the likes of Tencent or Alibaba,” Prof. Shameen said.

Conversely, there is value in maintaining independence and not pursuing partnerships. Prof Shameen gave the example of Testin, a Chinese tech start-up which offers a testing platform for mobile phone apps. Despite lucrative offers from both sides of the tech duopoly of Tencent and Alibaba, the firm chose to maintain their independence as they felt neutrality would increase trust in their platform.

“One of the most fascinating companies I have studied is a company called Testin,” said Prof. Shameen, continuing, “My students go crazy and say, ‘Why would anyone in their right mind in China not align themselves with one side or the other?’, but Testin believed they would completely lose any credibility after they took such investment.”

One of Prof. Shameen’s central themes in his research is his concept of ‘dancing with gorillas’ – a metaphor he uses to illustrate the potential awkwardness of large firms partnering with start-ups. He said that despite the difficulties, both sides end up coming together because no matter the dynamics or imbalance of the relationship, they both come out of it with value or results they would not have otherwise gained. However, he told the audience that the bigger partner in the collaboration did not necessarily hold all the decision making power.

He further stated that there is now growing sophistication in big corporations in terms of how they engage with start-ups, having had their fingers burned in the past.

“Gorillas also realise they are trying to compete for the hearts and mind of partners and are trying to be seen as better gorillas than others," said Prof. Shameen, adding, “What Alibaba is doing with data sharing is offering opportunities to create value for partners, whereas Amazon is being tight-fisted with its data-sharing, and has no problem with introducing competing offerings on what their partners do,” he said.

“There are some firms who are fairer than others but in the long run these companies are competing for partners,” he concluded.