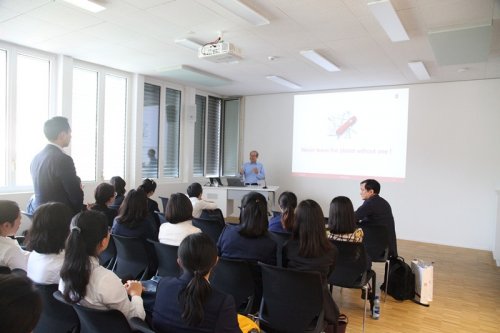 For some travellers to Switzerland, it is a must to buy Swiss army knives as souvenirs, but for the participants of the Exchange of Excellence Programmes offered at CEIBS’ Zurich campus, there is an “upgraded version” of the travel experience. In addition to studying the Victorinox case and watching video clips about the company, participants also visit the century-old Victorinox workshop based in Ibach, Schwyz, for a first-hand look at supreme craftsmanship. They also have the opportunity to communicate and interact with the company’s head Carl Elsener IV as part of the unique learning experience. The Victorinox case is a joint effort between CEIBS Associate Professor of Marketing Jane Wang, CEIBS Vice President and Dean Professor Ding Yuan, HEC Lausanne Associate Professor of Financial Accounting Dong Minyue, CEIBS research assistants Zhang Ling and Wang Xiaozhou, as well as CEIBS research fellow Qian Wenying. This is an excerpt from the case.

The white cross in a red shield is an emblem exclusive to the Swiss Army Knife. In fact, in Switzerland, the emblem was until recently a privilege shared only by Victorinox and Wenger – both century-old family businesses. In 2005, Victorinox acquired Wenger and in the process became the sole manufacturer of the knife.

In 1884, Karl Elsener Karl I opened a cutlery workshop in Ibach. His mother Victoria sold the knives he made.

In 1891, Karl Elsener I learnt that the Swiss army had decided to distribute knives to all of its soldiers. He then established the Association of Swiss Cutlers, which consisted of many small workshops. Larger volumes of orders enabled his workshop to scale up its capacity.

In 1909, Karl Elsener I registered “Victoria” as a trademark in honour of his deceased mother.

In 1921, following the invention of stainless steel, the company pioneered stainless-steel cutlery. Karl Elsener II created the “Victorinox” trademark – where “inox” is an international term for stainless steel.

In 1931, Karl Elsener II introduced automation into the workshop which enhanced the quality of cutlery.

In 1945, after the end of World War II, US soldiers stationed in Europe bought Victorinox army knives and took them home as souvenirs known as “Swiss army knives”.

In 1951, Victorinox launched the Swiss army knife with a bottle opener and applied for a patent for it.

According to reports, former US President Lyndon Johnson gave away more than 4,000 Victorinox knives embossed with his signature and started a new chapter of the knife’s popularity with the White House. Taking advantage of this trend, many American companies used Victorinox army knives as souvenirs to attract consumers.

An article in Reader’s Digest in 1978 featured a story about how a folding knife saved a girl’s life on a plane. When the girl choked on a candy, passengers unsuccessfully tried various means to save her. In a flash of inspiration, a physician aboard the flight made a tiny incision in her trachea with a Victorinox folding knife he was carrying in his pocket and pulled out the candy, saving her life. The article ended with a question: “What would have happened without that Victorinox folding knife?” This article was a great advertisement for Victorinox knives and also associated intense emotions with Victorinox products.

The Victorinox army knife has become a synonym for premium quality and multifunctionality. Ad slogans such as “Our helicopters are the Swiss army knife of helicopters” have appeared across a wide spectrum of industries. 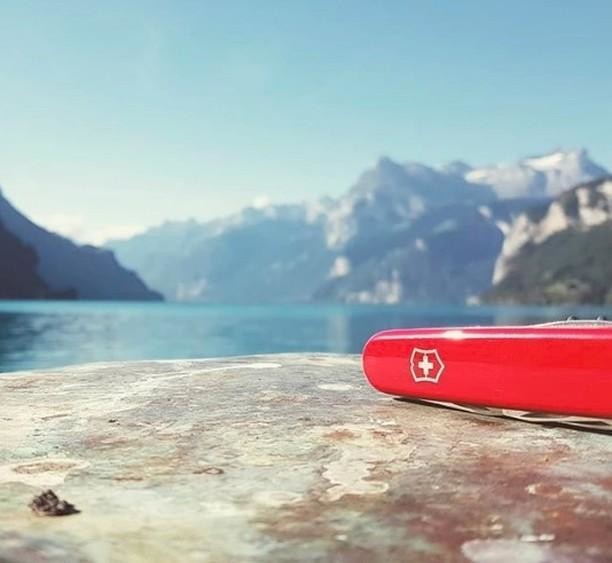 In 1989, in partnership with Forschner, a licensed dealer and US sales partner, Victorinox branched out into sunglasses and timepieces.

In 1999, Victorinox moved into the travel gear market as a franchisee with TRG Group.

In 2001, Victorinox unveiled its own apparel brand in the US and opened its first specialty store in New York’s SOHO district carrying all of its products. All of Victorinox’s products carried the same price tags in both specialty stores and franchised dealerships.

“User preference and feedback have spurred us on to think about how to maintain product competitiveness. We should go to lengths to increase investment so as to gain greater brand visibility. Users like our Swiss army knives, but they usually keep them in their pocket or wallet,” said Karl Elsener IV.

According to a questionnaire, the outdoor watch topped the list of the ten most preferred Victorinox products. Like Swiss army knives, Swiss watches, renowned all over the world, are made of stainless steel. As a result, Victorinox decided to diversify its business by making inroads into the watchmaking sector.

By putting its watches through 130 quality tests, double the average number of tests used in the watchmaking sector, Victorinox designed and manufactured “the Swiss army knife of the watchmaking industry”. Carl Elsener IV explained, “The Victorinox watch must be shock-resistant and waterproof so as to keep perfect time even when dropped from a height of ten metres or put into a washing machine.”

In 1999, Victorinox set up Victorinox Watch SA as its watchmaking company.

To the company’s surprise, the September 11, 2001 attacks on the US exerted a huge impact on Victorinox. Since the terrorists used folding knives to take over the planes, new aviation safety regulations that came into effect following the September 11 attacks prohibited passengers from taking knives on board. The September 11 attacks and new aviation safety regulations dealt a heavy blow to the army knife sector, since airport duty-free stores had long been major sales channels for Victorinox army knives. “The sales of Victorinox army knives plunged more than 30% overnight,” recalled Carl Elsener IV. Before then, sales of Swiss army knives had accounted for more than 50% of Victorinox’s total revenue.

Subsequently, Victorinox took a series of measures to mitigate the impact of the new rules:

Capacity: Victorinox adjusted the capacity of each product category, transferring some people from the army knife unit to watch and kitchen cutlery units.

Sales channels: Victorinox set about selling products permitted by new regulations at airport duty-free stores, such as watches and travel gear. Meanwhile, it expanded into new sales channels. For example, army knives with USB drives were made available at stores that sold tech products.

Instead of undertaking an aggressive expansion, Victorinox put a premium on sustainability. “The September 11 attacks made us aware of the enormous risks in over-dependence on a single product category, encouraging us to boost our diversification,” Carl Elsener IV said. “However, keeping our brand spirit from being eroded is our bottom line. Even one product below par would likely put Victorinox’s century-long reputation on the line. Turning down an offer of cooperation, in contrast, is no great loss.”

Before World War II, Wenger had been larger than Victorinox, but it was more than ten years behind Victorinox in introducing automation. As a result, after World War II, Victorinox left Wenger in the dust. The following table compares the two companies’ sales data as of 2004:

Unlike Victorinox, Wenger failed to build up its surplus reserve. To expand its product line, Wenger frequently pledged its shares to take out bank loans. In the post-9/11 era, however, sales of Wenger army knives did not pick up. By the end of 2004, sales of Wenger cutlery plummeted by 43%. As Wenger’s financial position took a nosedive, the banks decided to sell their stake.

In 2005, Carl Elsener IV acquired Wenger. He also promised not to lay off employees and to keep Wenger operating on its own. In 2013, he declared the merger of the army knife businesses of Wenger and Victorinox, with other business units unchanged. As a result, Victorinox defeated its long-time rival by way of the knife, the brand’s most central product.

Before 2000, Victorinox was a joint-stock company. Family members shared stock, but the Elsener family was worried that its descendants would dilute the stock and press for enormous dividends during business succession, which could lead to Victorinox’s decline. Therefore, Carl Elsener VI and his father decided to establish the Victorinox Foundation.

The Foundation has 100% control of Victorinox. Victorinox AG pours 90% of its profit into the Victorinox Foundation as surplus reserves annually. The remaining 10% is channelled into a charity fund for public welfare events. Incidentally, Victorinox has never applied for a bank loan, which is one of the main reasons it has survived two World Wars and several economic crises.

“Family members don’t have any privilege. We have to make sure the people who hold key positions are competent. We prefer a family member only when he/she and other candidates are similar in education, experience, and capabilities.” Nevertheless, he added, “Family members working at Victorinox are also important for ordinary employees. That means the family and ordinary employees are in the same boat, which is vital to the long-term development of the company.”

Victorinox has also attached greater importance to social responsibility. They provide lifetime free repair services for customers of the army knife. Some customers’ knives are handed down from their grandfathers and Victorinox still offers free repair. Even today, Carl Elsener IV still receives letters from customers all around the world.

Victorinox has never chosen to lay off its employees on the grounds of economic downturn, even during the First and Second World Wars or the Great Depression. Even during difficult times in the aftermath of the September 11 attacks, no one was laid off. Victorinox’s HR department has made it a top priority to create jobs for surplus labour. Its HR staff have recommended Victorinox employees to neighbouring companies which had a desperate need for temporary workers. These employees returned to the company after the crisis.

Carl Elsener IV is full of passion for his undertaking. It is from this passion that Victorinox has scaled to new heights under his leadership. However, in the context of the company’s foregoing an IPO, banning dividends, and setting high standards for family members to join the company, can the 24 members of the family’s fifth generation continue to maintain the same passion and cohesiveness? It is a question worth deep consideration.