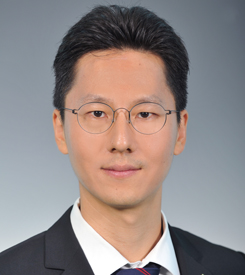 Gilyoung was born the only son, with five older sisters in a happy family. He became the man of the house and took over his family business at age 17, when his father passed away. During his university, he majored in industrial engineering and was interested in finance and venture business.

After graduation, he worked in Financial Planning Dept. of a major bank in Korea, which overcame the financial crisis of 2008. Recently, as a project manager, he successfully completed a series of tasks related to profit optimization. At the same time, he is running his family's tourist hotel. He has been involved with the business since 1996. In 2013, he oversaw the construction and grand opening of the new hotel.

As a travel lover, he has traveled to more than 30 countries. He enjoys many sports such as golf, swimming, soccer, basketball and so on. The thing he cherishes most is the time spent with his wife and two children. He is now looking forward to having great experiences and new opportunities with CEIBS.